It's not a Supra and it doesn't have a 2JZ, but you should still pay close attention and show some respect to a build like this 2002 Toyota Verossa. The 1JZ isn't the Brian Spilner of Toyota's turbocharged inline-6 family but more like the Han Lue - just as awesome and a close second to the star of the show. Commonly found in Chasers, Crestas, Mark IIs and Soarers, its power is roughly 280hp and 280lb-ft of torque (for comparison sake, the 3.0-liter 2JZ-GTE is around 320hp and 315lb-ft). The third generation 1J features a 2.5-liter with BEAMS architecture, VVT-I and a single CT15B turbo (first and second gen 1JZ engines came with quick-spooling twin CT12a turbochargers). Like its big brother, the 1J's stock block is capable of 400+hp so it's not uncommon to see tuners turn up the boost or slap bigger turbos on 'em. Most 1JZs were mated to Toyota's rather robust R154 five-manual gearbox, also capable of handling the heavy torque load. 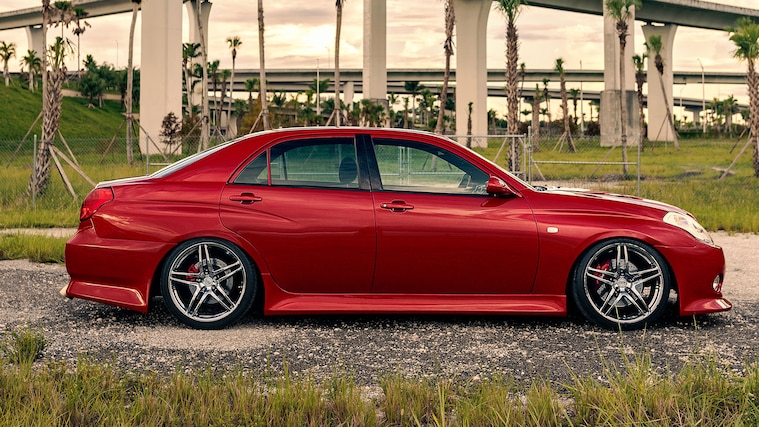 If you haven't heard of the JZX family, don't stress out because they were never designed for the American market. The chassis line up consists of the Chaser, Mark II, Cresta and Verossa. They're all sedans and unlike our four-door Camrys and Corollas, the JZX models were offered in rear-wheel-drive, making them quite popular in the drift community. This particular Verossa represents one of the last JZX models made, and it's very similar to the Lexus IS300 platform in body, chassis and subframe. It's a Verossa VR25 model, which features the most potent 1JZ-GTE but also electronic throttle control. It's also been spec'd out with all the optional goodies like adjustable headlights, OEM tinted windows, navigation, built-in TV/DVD player, and there's even a Japanese lady's voice that tells you when maintenance is due or when you're low on fuel (how cool is that!).

Despite all these neat options and a healthy powertrain, the Verossa has been often looked at by car critics and journalists as "one of the ugliest Toyotas ever designed." The name "Verossa" is derived from the Italian words "vero," meaning true, and "rosso," meaning red (we don't get it). It's been said that the designers attempted to infuse a bit of Italian flavor to give it a bit of Alfa Romeo-esque emotion. Let's just say Toyota didn't succeed with its $50K sedan; however, for Alex Nanuti of Florida, he saw this as an opportunity to import and build a project car that the U.S. has really never seen before. 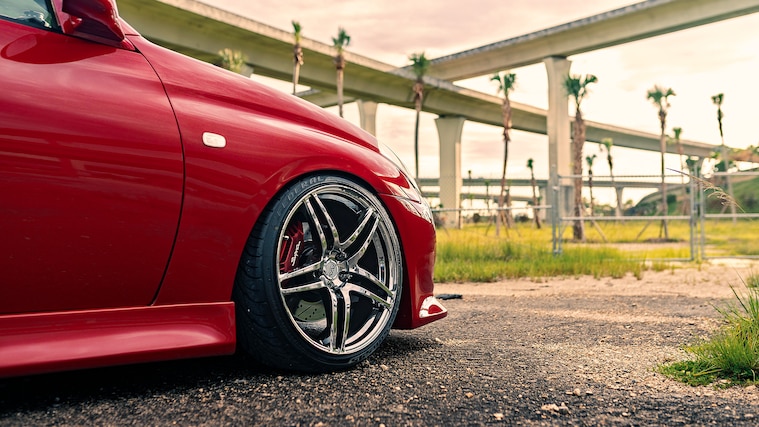 As an editor, it's always interesting to hear where our feature car owners are from and how they got their start. Alex's story starts in a tiny village in Romania where at the age of six, he and his family picked up everything and moved to Los Angeles within the Glendale community. Eventually, Alex found himself moving to Florida where he now works a grueling 60-hours a week as an accountant; however, in between all the spreadsheets and reports, he became a bona fide gearhead and Japanese car fanatic.

"Coming to U.S., I was introduced to Need for Speed video games, the Fast and Furious and the Los Angeles car scene. I was a dreamer up until I came to Florida, where a lot of my dreams came true. Everything was more affordable and there were no laws when it came to cars really." Which explains his first project car, a Kouki 1998 Nissan 240SX with turbocharged KA24DET conversion. Then of course, this peculiar Verossa project

"Is it Florida state legal? Yes. Can it be titled in many states? Yes. It's insured up to $50,000 in value and no insurance company would have a problem paying out on it." Alex wouldn't go into detail about how it was imported, but he wouldn't be the first one to tell us Florida is the most lenient when it comes to registering and driving an imported JDM right-hand-drive vehicle. 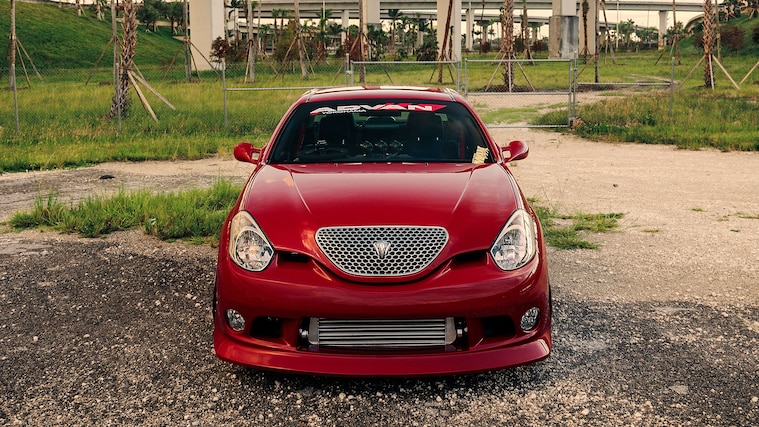 So back to the Verossa at hand It's still not a pretty specimen in stock form. Alex had his work cut out for him, even after he'd disassembled every bit of the car including the windshield, doors, interior, carpet and engine for a complete repaint in a custom candy red. He sourced an authentic Vertex kit from Japan that would dramatically give the car its more aggressive and sporty personality. He then followed that up with Advan Model 5 wheels. According to Alex, it's quite easy to find sets of 17" and 18" Model 5s in Japan as they're often used by drifters; however, his set of 19x9.5" are super rare, and also required a bit of fender massaging to achieve the perfect fitment. For good measure, he had the Advans re-chromed to shine like brand new as the old chrome was flaking.

Before the aesthetics were finished, proper chassis upgrades ensued using BC Racing coilovers and DMAX arms which helped give the Verossa just enough negative camber for a proper street drift setup. The bigger front brakes were taken from the Supra parts bin, then upgraded with StopTech rotors and EBC pads.

While it may have a smaller displacement than the more popular 2JZ, the 2.5-liter 1JZ is every bit as capable. Alex has had experience with both motors but tells us, "I prefer 1JZ - deeper sound, more distinctive. Obviously if I was going for highway power goals, a 2JZ would make more sense, but at the end of the day, I simply love the JZ platform. They're perfect, reliable and able to take beatings." Keeping the car streetable was most important and you'll notice that Alex has taken careful measures to make the engine perform better while also remaining reliable with upgrades that include improving airflow, cooling, and fueling in addition to controlling the exhaust note. With bolt-ons, he estimates his 1J puts down 300hp at the wheels, which is plenty, however, he hints there's room for plenty more. "No need to rebuild and you can make good horsepower on stock everything with just a standalone tune and E85. Another popular option is to send out the turbo for a rebuild with steel blades, bore it out, add a bigger compressor, raise the boost, bigger injectors You'll reach 400hp no problem." 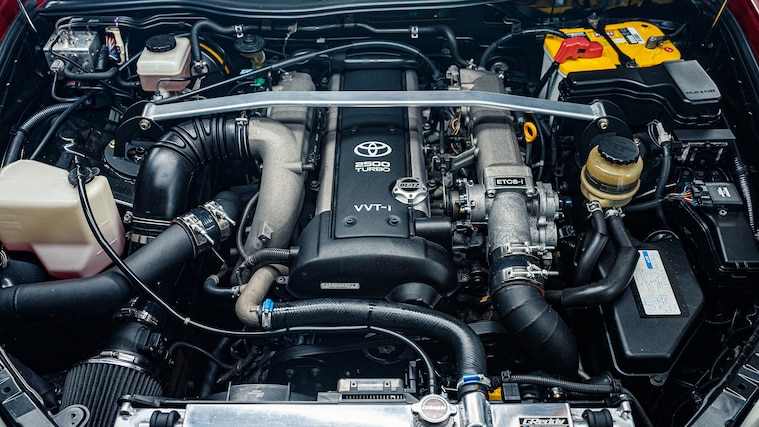 The most challenging part of Alex's Verossa project wasn't the engine, but the transmission. Alex's model came with a J160 six-speed manual, which wasn't the best match for the torquey JZ engine, especially once modified. After blowing up a few and swapping them in and out of the car a bunch of times, he eventually placed an order for a brand new R154 manual from Japan. He had it rebuilt by Driftmotion and the rest is history A troublefree 1JZ/R154 powertrain that'll take all the abuse he throws at it.

"I love being different, taking something unusual and making it into something people wouldn't expect to see. This car is important to me because it's ugly, it's a bastard, an outcast, but now it stands out and people look at it and have to look at it again. I want to be remembered as the guy who took a Verossa, gave it a sleek look, drove it hard and made them cool."