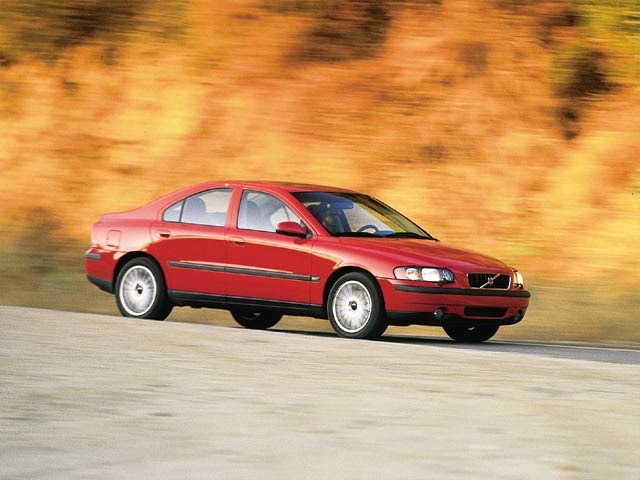 The Volvo S60 has a sexy body and a wonderful heart, which is enough for me to overlook its inability to dance. Volvos haven't been boxy for several years now, and I like their curves. Chris Bangle (BMW's design chief) called Volvo's tail-end treatment an 'extrusion," but it seems more natural than his solution to the same aerodynamic problem on the new 7 Series. I'll admit I like the S60's front end better.

The 250-bhp T5 engine is just cool. I don't know why, but the thrum of the turbocharged inline five makes me want to wind it out all the way, every time. The first time I drove the S60, I had forgotten it had a five, but I remembered the first time I stepped on the gas. It's addicting. Not the usual four, not the smoothness of a six. It sounds serious, and backs it up with serious torque. Big, fat, dripping gobs of it. Okay, not like a big V8, but part throttle leaves other traffic at the intersection. The S60 could probably hang with a Mustang GT. The engine isn't perfect, though. The torque curve feels a little lumpy, and when lifting off the throttle it hangs partially open for a moment. The idea is to avoid a puff of hydrocarbons out the tailpipe when the throttle is snapped closed. Volvo is one of the few manufacturers that seem to think it is necessary, which kind of makes me wonder why.

This Volvo captures the best of what Volvos have been, however. It is a big car with a lot of motor. It is built for both Swedes and corn-fed Midwestern Americans, with plenty of headroom even for me and wide, comfy seats. The stereo is good. Each time I get into the S60, I have to relearn the unique sound system interface, but it's very functional.

One glitch that is a continual irritation is the detent on the turn signal stalk. When I flick it back to cancel a signal, it usually goes past center and signals the other direction.

The S60's suspension could benefit from the same lessons Saab has learned lately. The car is awesome by domestic standards, but the overall control feel is rubbery compared to others. The shift linkage has a lot of rubber in it and the steering is a little remote. The car feels undersprung and as though it relies too much on elastomeric supplemental springs to control body roll in corners and limit travel over larger bumps. The dampers have little compression damping and try to compensate with rebound control. The idea is to avoid impact harshness, but the trade-off is what Tokico's Richard Meyer recently described to me as 'abruptness." Just as our ears gather information about a sound from the echoes after it stops, our bodies are conditioned to expect certain patterns of motion. Excessive rebound damping interrupts the smooth cycle we expect to feel. Though the S60 is not yet supported by aftermarket damper manufacturers, it surely will be within a year or two. (Note: For the S60 T5, Volvo offers a sport suspension package that includes a thicker (24mm) front stabilizer bar and a 21mm rear stabilizer bar`an optional feature our long-termer doesn't have.)

So the Volvo isn't a 5 Series. Do I like it anyway? Absolutely. I've been cruising around in it for a week solid, now. It's roomy and comfortable. It's fast. It's pretty. It carries miscellaneous car parts in the trunk with room for whatever else I need to haul. Over the holidays, it transported the whole family and all our packages and luggage in comfort and style. That was more than enough for them.