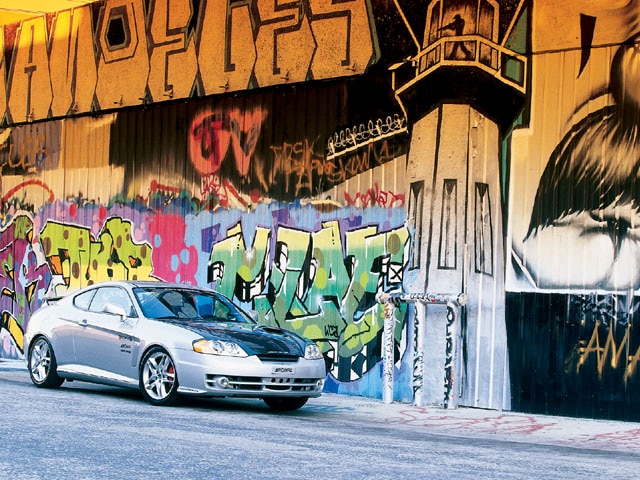 Still breaking its way into the thriving American sport compact market, Hyundai's Tiburon sports coupe was good enough to make it into our 2002 Eight Great Rides list. A combination of decent handling, good power, a great transmission, and a rear 3/4 view somewhere between Mercedes' CLK and Ferrari's 456M got it the nod. It was good enough in fact, that Rob Tallini, proprietor of the Carbontrix and Road/Race Motorsport divisions of the Road/Race group, built this 2003 Tiburon as a rolling display of the company's wares.

As is clear from the name, Carbontrix manufactures carbon-fiber and fiberglass body panels and accessories both for production vehicles and custom one-off projects. This early-model (preproduction) Tiburon Rob acquired acted as a development platform for the ultra-lightweight carbon O.E.-style rear wing and hood seen here. While unique in its own right, the Hyundai's looks are furthered by rolling Ronal RT Twins in a slightly wider-than-stock 17x7.5 fitment. Final external cosmetic accents come courtesy of a set of Carbontrix carbon-fiber eyelids over the stock headlamps.

Already low and amazingly well damped for a stock car, the Tiburon's body roll is further limited by a spring kit developed by the Progress Group in conjunction with Road/Race. Dropping the car 1.5 inches in front and 1.3 inches in the rear, the springs keep the car off the bump stops while maintaining a civil ride. With most OEM dampers ill-suited to even stock suspensions, the Hyundai's surprisingly manage to keep even these uprated springs under control. Also helping to spread the cornering load equally are Toyo's T1-S street tires in an upsized 225/45-17 all around.

The relentless understeer known to plague stock Tiburons is cured with a dual adjustable Progress Group rear anti-roll bar and bushing kit. In its softer setting, the 22mm bar ups stiffness 80 percent more than the 19mm stocker, or 135 percent in the stiffer position. Rob finds the first setting balances the four-cylinder cars well, while the heavier V6 needs the latter.

Road/Race's trademark tubular steel chassis bracing is fitted to the front and rear strut towers to keep everything in place. The significant difference in rigidity between inexpensive imported adjustable bars and accurately manufactured, welded, nonadjustable steel units is notable.

Those looking for real handling improvements should be keen to do their research in this saturated market. Slalom speeds and skidpad numbers illustrate well the improvements made to the chassis, rising from 67.3 to 69 mph through the cones, and up from 0.84 to 0.91 g around the pad. Running an R-compound tire like Toyo's Proxis RA-1 would've probably made the same difference again.

Looking the part of an early '90s Japanese engine, Hyundai's Delta 2.7-liter V6 plays the part too, putting out a claimed 170 hp and 181 lb-ft of torque in stock trim. Luckily, more power is easily found, with good intakes building an additional 10-15 hp at the wheels. In keeping with the shop's "no bull" motto, Rob went straight to the sole forced-induction supplier of the day, Alpine Developments, Inc. Its Stage 1 aqua-cooled supercharger package is based around an Eaton M63 positive displacement supercharger, similar to that used in the Jackson Racing and TRD kits.

Adapting the supercharger to the Delta engine requires a custom short-runner intake manifold, which doubles as the supercharger's mounting surface, and is included in the kit. The manifold's casting houses a large air-to-water intercooler core, or aqua-cooler, as they say in Alpine speak. Many would argue the cost/ performance merits of intercooling such a low-boost (4 psi) installation; however, none could dispute the potential goodness it offers those willing to spin the blower to Alpine's recently released Stage 2 levels (8 psi). Yet to do so has its costs too, including the loss of the kit's incredibly valuable CARB E.O. number. All told, the Stage 1 kit includes everything needed to bolt on a 35-percent power gain to an otherwise stock, and rather limp, Tiburon. What's more, power builds throughout the rpm range, and really fills in between the stock peak of 5200 and the 6500-rpm redline.

Road/Race worked a little of its magic during the supercharger install to make the most of the system. An optional scoop was installed in the Carbontrix hood to direct cool air over the filter of a Road/Race short ram intake. The throttle body was enlarged from 54mm to 60mm to reduce pumping losses through the blower. Time was spent cleaning up and port matching the supercharger inlet with the enlarged throttle body. A one-off Road/Race single 2.25-inch cat-back exhaust system sans muffler pulled the plug on the other side of the engine. REAL Co. of Korea supplied its supercharged ECU tune for the Delta engine, adjusting fuel and ignition timing for better performance, and raising the rev limiter to 7000 rpm. A Carbontrix engine dress-up kit and radiator cover replace miscellaneous panels within the engine compartment, tying in the carbon theme.

The stock clutch seems to hold the supercharged torque coming down the driveline, however, it has no beneficial effect on wheel hop. Road/Race developed a set of urethane engine mounts to stop the destructive drivetrain thrashing. Since the six-speed Hyundai shares a transmission with Nissan's Sentra SE-R, Altima and Maxima, finding a sweet helical limited-slip differential isn't all that much of a chore. The improved power and traction work well to get the car from 0-to-60 mph a full second faster than stock, now at 6.8 seconds. Interestingly, e.t. gains are the same, from 15.8 down to 14.8 seconds, which is odd, since typically picking up time at the beginning of the track will get you more at the end. Trap speed climbs from 87 to 95.7.

Driving the Tiburon is a joy from the mostly stock cabin. The factory seats are comfortable and supportive, and Schroth harnesses keep the pilot in place during cornering and when the big Rotora brakes get their bite on. Eleven-inch-diameter front rotors and single-piston sliding calipers were tossed in favor of the 330mm x 30mm (13 x 1.18-inch) cross-drilled and slotted rotors clamped by big cast-aluminum four-piston binders. Also included in the kit are DOT-approved stainless-steel braided lines and Rotora street-compound pads. The rear brakes were style coordinated with stock-sized, slotted Rotora rotors. GReddy 52mm boost and EGT gauges share a Carbontrix A-pillar mount beside the driver.

As is the fate of most preproduction vehicles, Rob's Tibby is now reclassifiable as truly compact(ed). That's right, it went to the big crusher in the sky only days after our photoshoot and before we had a chance to put it on our chassis dyno. Thankfully, it fathered a good number of products for a budding Hyundai enthusiast community before it became a bunch of Coke cans.

"I drove the car for eight months," says Rob. "It turned out to be a great daily driver with balanced performance and comfort, as well as a track-day sleeper." After a week behind the wheel and a day at the track, we agree.

Get the import tuner news and rumors from Import Tuner Magazine