We drive a car that might have got away

This will come as a bitter pill for American enthusiasts to swallow, but while they're enjoying the new Mk7 VW Golf, European enthusiasts are complaining that they must endure the GTI and Cabriolet in Mk6 guise for a while longer. In fact, their GTI arrives this summer while the Cabrio has another year to run. But to rub salt into our sensitive wound, they will get to drive a new Golf R Cabriolet to ease their pain.

We spoke to Volkswagen of America and a spokesman claimed they were "very interested" in the drop-top hot-hatch but couldn't confirm it would arrive and, adding that since the Mk7 GTI isn't expected until Summer 2014, we shouldn't hold our breath for an R Cabriolet any time soon!

So in a perverse form of masochism, we decided to find out exactly what we were missing. And who can deny the attraction of the R styling on the Cabriolet platform?

There's an elephant in the room though, and it's not the R Cabriolet's 200 lb weight increase. Instead it's the sizeable (near 30%) increase in the sticker price. In Europe, that pushes this R into entry-level Porsche Boxster territory, which is beyond ambitious.

Adjust the price for specification and the VW looks more favorable, factor in the rear seats and it starts to make more sense. Yet the fact remains that if you're seeking open-topped fun, the Boxster is impossible to ignore.

If the R Cabriolet brought the hatchback's performance credentials to the table it might make a convincing case for itself. However, in its transformation from hatchback to fabric-roofed convertible, the R's four-wheel drive system has been ditched. And that's a problem, particularly when the 2.0-liter TSI turbo engine delivers the full European-spec 265hp.

Use all that power and the front wheels struggle to contain the forces, creating havoc for the writhing steering wheel as the tires wrestle for available grip. This inevitably robs the R Cabriolet of the hard-top's traction advantage and elastic accelerative ability.

Of course, too much power can be fun, in a tempestuous, unruly way, but the R Cabriolet is otherwise a bit too civilized and anodyne for its own good.

The standard DSG six-speed goes some way to robbing the R of enjoyment. It's undoubtedly clever, but not very engaging; the only real sign it's shifting gear is the change in engine tone. In fairness, the engine punches with conviction and sounds great, delivering a bass-rich note more akin to a six than a blown four. It's quick too, reaching 62mph in 6.4sec on the way to 155mph. But in reality, it feels no more special than its drop-top GTI relation - which would leave you with a bigger grin because you have a sizeable chunk of change left in your pocket.

The steering wheel itself, covered in contrast- stitched leather, doesn't deliver much in the way of feel. There's heft: its weighting is on the heavier end of the scale, although there's little information about what the front wheels are actually doing. And that's exacerbated under power, where you control the squirm not by steering into it, but by backing off. This diminishes the R's ability to utilize its power advantage over its lesser Golf Cabriolet brethren, and the firmer, 25mm lower suspension also upsets its composure.

Three settings are offered on the variable damping system, though Comfort mode failed to deliver a particularly supple ride. Normal and Sport only increased the discomfort and, on the road at least, pounded you to slow down.

Fortunately, VW isn't over-ambitious with its sales target, anticipating the Golf R Cabriolet to sell in the hundreds rather than thousands. On looks alone it will undoubtedly win over some few deep-pocketed Golf fans - the R's gloss-black grille, unique front bumper, deep side skirts and rear diffuser work extremely well with the edginess of the open-topped Golf. The 19" wheels also help, as does the lowered ride height in terms of visual appeal.

Inside, you're unlikely to want for much, save the optional sat nav. VW has thrown equipment at the range-topping R Cabriolet to justify and partially create the ambitious price tag.

Sadly, no amount of standard equipment can overcome the Golf R Cabriolet's high price and front-wheel drive layout that makes it more of a miss than a hit. 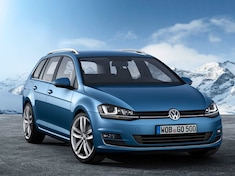 The all-wheel-drive Golf Variant 4Motion will also debut in Geneva. It will be available as a TDI Clean Diesel model with 105- and 150-hp engines.