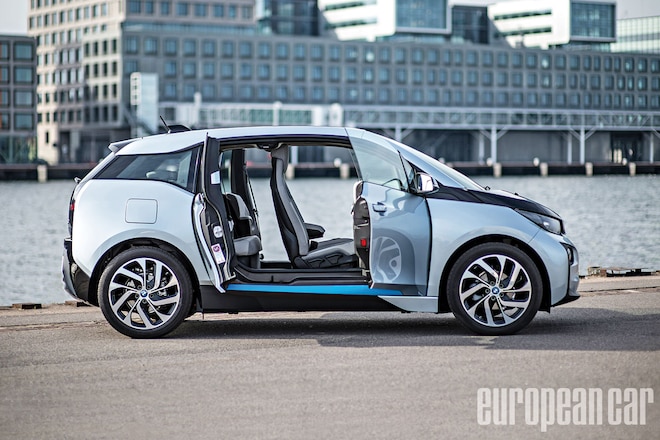 Our futuristic 2014 BMW i3 is sharing the road with a garbage dumpster. The dumpster was blown here by a vicious crosswind, while the i3 arrived courtesy of its all-electric drivetrain. Silent and stable, it was unflustered by gusts despite being 62" tall.

The famous blue-and-white roundel has come to symbolize speed and handling, but BMW has said, without apology, that the i3 will create a calmer driving experience.

So as the suburban debris became a new obstacle to negotiate, all was serene inside the i3's spacious cabin.

The i3 was conceived as an electric car, so the motors and batteries weren't forced into an existing frame. Instead it's a clean-sheet design, more appropriate to accommodate the specific needs of an EV.

Its existence owes a great deal to BMW's experience with the experimental Mini E and Active E. In fact, the latter's drivetrain provided the basis for the i3.

Weight is a prime concern when it comes to conserving energy. And BMW's solution was radical: An aluminum lower tub, reinforced with magnesium struts to house the motor, lithium-ion battery pack and suspension components. It's topped off with a shell made from recycled carbon fiber-reinforced plastic (CFRP) that encapsulates people, pets and paraphernalia.

And the high-tech construction means the vehicle doesn't need a conventional B-pillar. The CFRP structure is stiff enough to support the vehicle in a collision but means the rear "suicide doors" are hinged at the C-pillar.

As a result, entry to the vehicle is easy, although the front doors must open for the rears to operate, which could be a pain. However, head-, leg- and shoulder room is good in all four seats, making it feel spacious inside.

The EV promotes sustainability from the way it's constructed (in a wind-powered Leipzig factory), to the materials used. It also has a drag coefficient of 0.29 - which is about the same as an Audi A4.

The i3 incorporates a tight turning circle of 32.4' for city driving, an elevated driving position as well as superb all-round visibility.

And the i3 is definitely a city car. Its range is about 85 miles (without the optional range extender), and charging using 115-volt domestic sockets takes more than five hours. Of course, there's a 220-volt fast-charger available to reduce the time to three hours.

With all its weight at the bottom, the low center of gravity creates stability in a car that only weighs 2635 lb. And it exhibits handling talent that negates its narrow track and skinny 155/70 R19 front tires. Interestingly, BMW's chief designer explained that his department requested the larger diameter wheels to give a feeling of quality and sportiness, rather than it being purely an engineering solution.

That said, there's a pleasingly direct feel to the steering and body roll is largely controlled. The ride quality never gets harsh but understeer is the inevitable result of hitting the throttle (or should that be the voltage regulator?) hard. However, the usual suite of driving aids kick in before things get out of hand.

The 125-kilowatt electric motor is located below the trunk, driving the rear wheels with 170hp and 184 lb-ft of torque. And one of the great joys of electric motoring is that peak torque is accessible from a standstill, so the i3 can zip through city traffic, overtake on open roads and hum along the highway with ease, reaching a top speed of 93mph. But that's only part of the story...

Welcome to the world of one-pedal driving: It takes familiarization, but moving forward and slowing down can be achieved by modulation of the accelerator pedal alone. It's the result of using an electric motor with regenerative braking, which BMW has carefully calibrated. So instead of lifting the right foot to get to the brake pedal, the rate of travel corresponds to the accelerator's position.

Naturally, there are times when the brakes are needed, and with discs all round they have none of that weirdness exhibited by some regenerative systems, but in most situations the left pedal is redundant.

It's worth noting that if you do come off the accelerator quickly but don't hit the anchors, the brake lights will still illuminate, telling drivers behind you're slowing sharply.

In common with all BMWs, the iDrive control has various functions such as air conditioning, audio, phone and nav. It also shares the driving mode button that allows the driver to scroll between Comfort, Eco Pro and Eco Pro Plus modes.

As you'd expect, maximum range is accessed in Eco Pro Plus, since it reduces certain functions, like heating, to keep as much battery power directed to the wheels as possible.

The biggest problem for new EV owners is range anxiety, where drivers are concerned about having enough power to reach their destination. So BMW has included an optional range extender in the price list. It's actually a flat-twin, 650cc BMW motorcycle engine that also squeezes under the trunk floor and costs an additional $3950, with its fuel tank holding 2.4 gallons.

The engine is claimed to double the i3's range, but BMW seemed oddly reluctant to sell it. In fact, we were told that if a customer requests one, they'll be invited to sample the regular version for a while, in an effort to calm his range anxiety.

According to BMW's research, most people's regular journeys are within the range of an EV for 80% of the time. And for the remaining 20%, the company is looking at a program where i3 owners can use a regular BMW for a number of days per year for longer trips.

As an added bonus, the i3 has its own SIM card, to communicate with the owner's smartphone and monitor charging time, range, etc. And via BMW's ConnectedDrive it can also contact BMW's nerve center that includes roadside assistance.

Trim levels and pricing will be announced nearer the i3's launch in Spring 2014, so keep an eye on europeancarmag.com for further details. 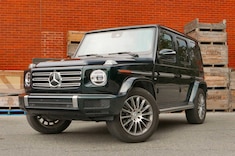