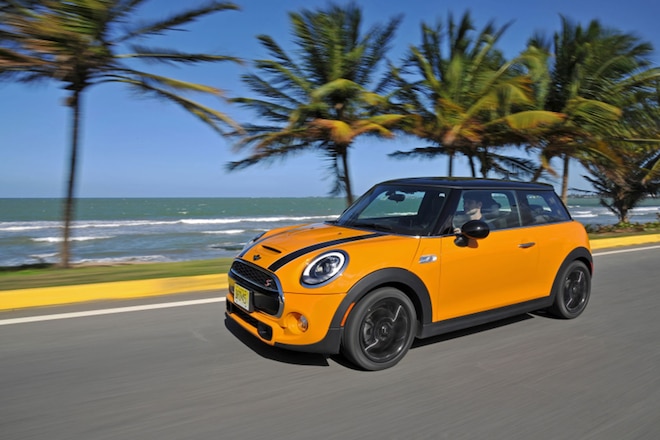 - Cons: Continues to get bigger | Rather tall gearing for spirited driving | Suspension in Sport Mode rather stiff 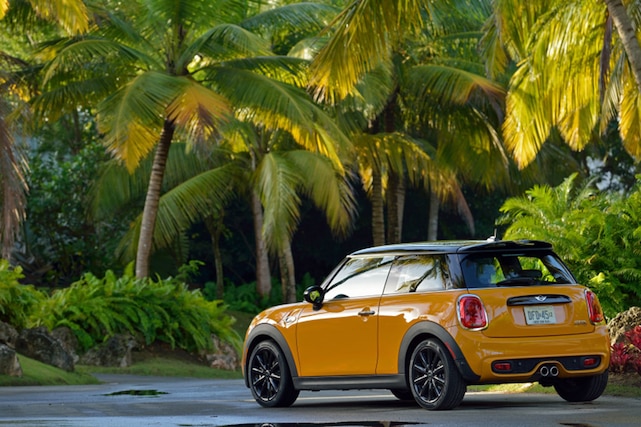 To call the Mini Cooper a success story is a colossal understatement. The automaker sold 305000 of its second-generation Coopers in 2013 alone, with most of those transactions Stateside. Planning to expand its market share, Mini designed a new car package that will not only reinvigorate existing customers, but could also tempt others to switch brand loyalties.

So while you might think you're simply looking at an updated, second-gen Mini Cooper, we're assured that the Cooper and Cooper S are all-new vehicles. They've been thoroughly redesigned, putting the product ahead of its predecessors in terms of both performance and value. 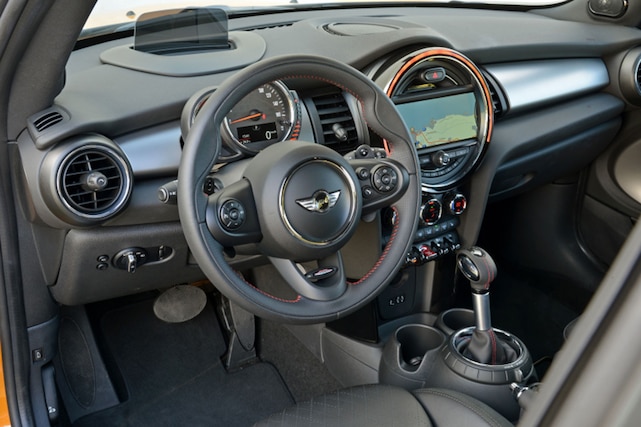 Starting with the appearance, the body was stretched 4.5" and widened 1.7", although it's only 0.3" higher, creating a more aggressive stance. As a result, luggage space has increased by more than 30%. The dimensional changes are significant, since the Mini is supposed to be a small car, but it still looks very much a Mini, hence the slogan, "The New Mini. The New Original."

Outwardly, they have new headlamps, with optional LED driving lights as a first in this segment. There's a hexagonal radiator grille, new bumpers, the choice of five new paint colors, plus an assortment of new wheels in silver or black, ranging from 15-18".

For the first time, both the Cooper and Cooper S get British-built turbocharged engines using BMW's TwinPower technology, direct injection and variable cam timing (double Vanos on the S). The base model's is a redesigned 1.5L three-cylinder, while the four-cylinder in the S jumps to a welcome 2.0-liters. Although the 1.5L diesel three-cylinder isn't destined for us Stateside at present, both blocks come from the same mold. 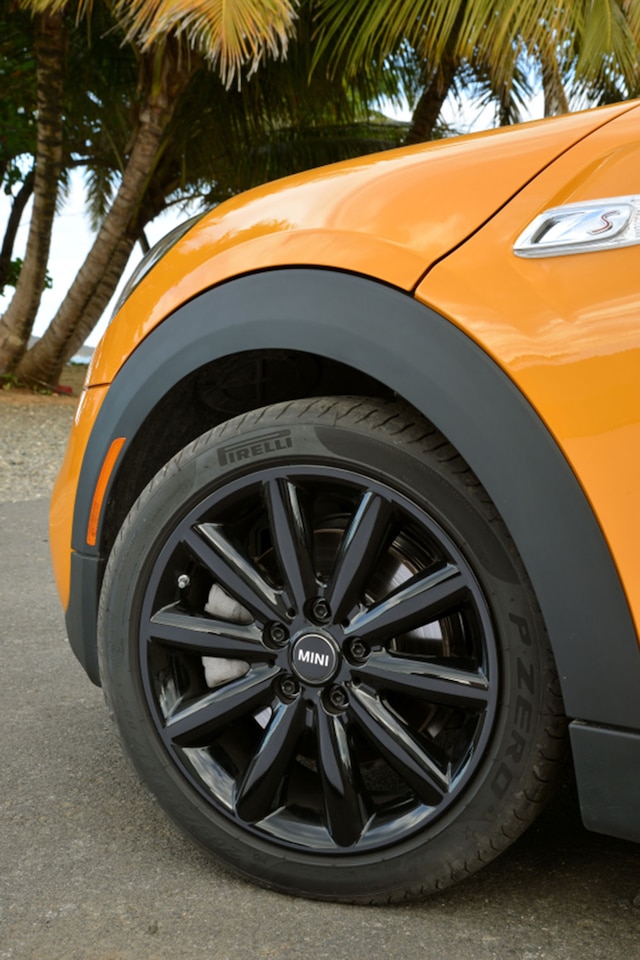 Flown to Puerto Rico to sample the new car away from the winter misery in North America, we chose to blaze the jungle trails in the six-speed manual Cooper first and, to be honest, for under $20k our expectations weren't lofty. But sliding into the cockpit, we instantly realized how comfortable yet sporty the John Cooper Works steering wheel and factory seats felt. The adjustable armrest keeps you comfy on long driving stints and there was plenty headroom.

It was also great to see the speedometer back in the instrument cluster rather than the cartoon dial that used to be in the center dash. This has allowed Mini Cooper to utilize an 8.8" screen for its sophisticated infotainment, which includes a Driving Excitement Analyzer that recommends optimal shift points and even records peak-g acceleration. There's also an optional rear parking camera and GPS navigation available with the new car. 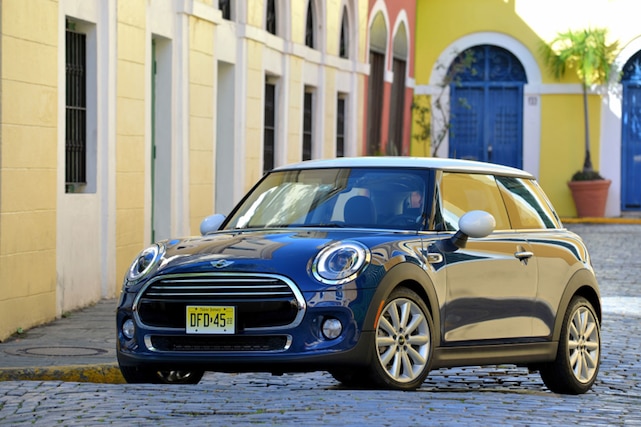 Smartphone apps, Facebook and Twitter accounts, appointment calendar and a web radio can be accessed through the large new car screen here as well, giving you access to BMW's technology suite that keeps you connected on the road.

The Cooper's 1.5L three-cylinder turbocharged engine was rated at a measly 137hp, but it had 169 lb-ft of torque (a 51 lb-ft increase over the previous base model) giving a surprising punch in the lower gears. It wasn't until pushing highway speeds that the acceleration started to plateau, even with the Cooper's 0.28 drag coefficient.

Given the new optional driver assistance systems, including camera-based active cruise control, collision and pedestrian warnings with brake function, as well as high-beam assistant and road sign detection, the car is certainly on your side.

For those who dread the city squeeze, the New Mini has a parking assistant system that detects suitable parking spaces and executes the necessary parallel-parking steering movements for you. All the driver does is operate the gear selector and throttle.

Adding to the base Cooper's fun factor is the engine's soundtrack. At 4000rpm it reminded us of a watercooled 911 Turbo, albeit much quieter. When we reported this to Mini engineers, they explained they'd worked diligently on the harmonic frequencies to make it sound like a six-cylinder. 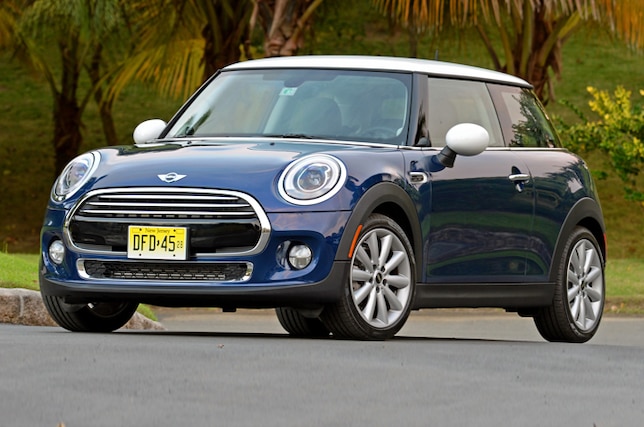 After our pleasant drive we then transitioned into the Cooper S with far greater expectations. As with previous generations, the S is easily distinguished from its little brother by larger wheels, the signature hood scoop and different bumpers with functional front brake ducts.

While the interior was similar to the base model (no bad thing), pressing the Engine Start button focused our attention on the exhaust note. The Mini Cooper 2.0T purrs but has a more ferocious snarl when provoked. 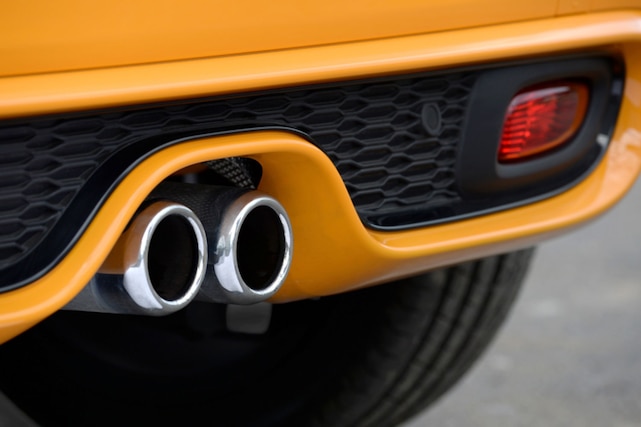 We were able to sample the new automatic transmission here and liked how it looked similar to a manual gear selector. Aside from that, the six-speed auto featured Mini's new "Predictive Drivetrain." It's a GPS-based system that accounts for your route profile to control gear shifts!

For those wanting more control, the paddle shifters turn with the steering wheel and provide precise gear selections with near-DCT speed. The addictive exhaust also pops on deceleration and downshifts, providing the icing on the new car driving cake.

Combine this output with a feathery 2760 lb curb weight (92 lb heavier than the previous S) and 0-60mph comes in a factory claimed 6.4sec - although we wouldn't be surprised if it scores a "high-five" when independently tested. 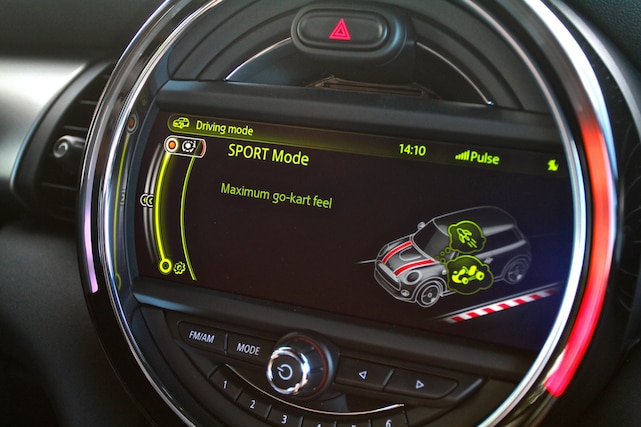 The Cooper S is simply quick. It's enormous fun to drive yet will reward the driver with up to 40mpg on the highway, which is an 18% improvement over the previous model.

Carving through Puerto Rico's turns, we experienced Mini's new Dynamic Damper Control, which is offered on both models. It provides two different settings for the dampers' compression and rebound, enabling drivers to choose between a sporty or more comfort-oriented mode.

While the sportier level was remarkably stiff on uneven surfaces, both levels absorbed the bumps with a finesse and predictability you'd normally find in a BMW 3 or 5 Series. And, given the car's extended wheelbase, Mini did a fantastic job to preserve the characteristic kart-like precision.

Compared to the previous generation, the new Mini models pack a punch of new technology throughout, more powerful and fuel-efficient engines, better crash protection, more luggage space and only a marginal increase in weight. And to think, the base price only increased by $250 and $300 for the Cooper and Cooper S, respectively. 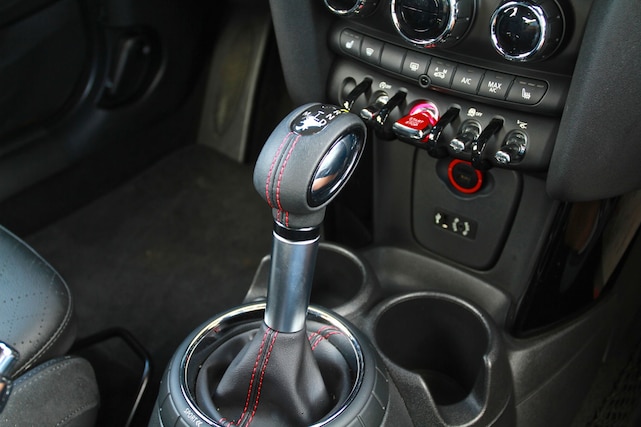 The gap between the two models has narrowed, so that both can be thoroughly enjoyed by performance-minded enthusiasts, with the Cooper bringing a low admission price.

So which model would we take? If we're honest, the Cooper provided a memorable combination of good looks, a torque-rich engine, superb handling, great ride comfort, exceptional affordability and gobs of fun. It'll please most families of four and was definitely the surprise of the day.

Given a limited-slip diff and some aftermarket software, we think the Cooper would be an unbeatable package.

The Cooper S, however, has a more aggressive appearance (even if the air dam seems to give it a worried expression...) and its 37% power advantage is enticing for only $4k more. So maybe we'll take a manual Cooper S in Volcano Orange, please! 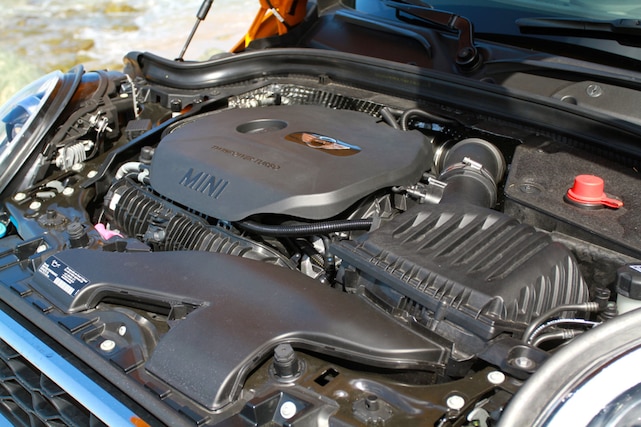 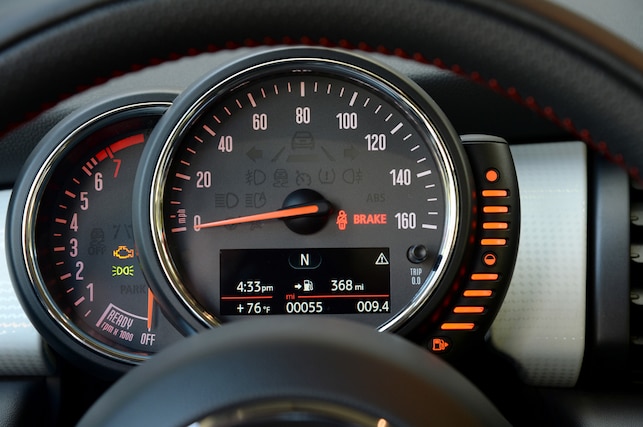 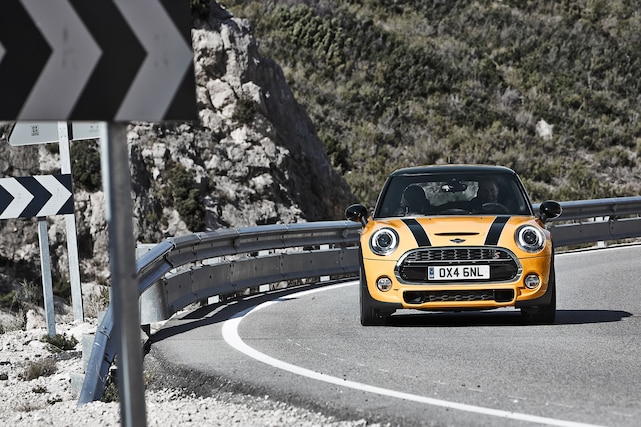 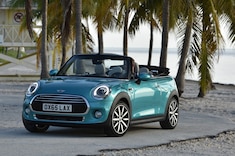