A look into the updated VW model.

The Volkswagen Polo GTI has always had an image problem. It has never quite managed to live up to its potential as a convincing understudy to the iconic Golf GTI. Blame its foundation. For all its upmarket appeal, the Polo is the chaste, bookish, flat-shoed, and cardigan-wearing student rather than the outrageous sorority girl.

This new engine features a combination of direct and manifold injection, variable valve timing, and an electronic actuator for the turbocharger's wastegate in a bid to minimize turbo lag and improve driveability in general. The turbo also enjoys water-cooled exhaust gas recirculation that's fully integrated into the cylinder head.

Along with some other revisions, the new Polo GTI delivers 190 hp, compared with the old car's 178. There is a corresponding improvement in the zero-to-62-mph time, too: 6.7 seconds rather than 6.9. Torque is increased to 236 lb-ft, available between 1,450 and 4,500 rpm. This substantial increase is made possible by Volkswagen offering a manual option.

Yes, purists can rejoice. The once DSG-only Polo GTI is now available with three pedals and a stick—a good thing in this marketplace. The DSG remains an option, but in the interests of longevity, Volkswagen has dialed down that version's twist by 52 lb-ft, its peak torque of 184 lb-ft delivered between 1,250 and 5,300 rpm.

Those seeking economy will be giving their left foot a rest. We'll take that slight penalty for the joy of a six-speed manual. Indeed, a considerable part of the fun wringing every bit of performance from diminutive hot hatches is in shifting gears oneself. A look at the plummeting European sales of the once market-leading and now paddle-shift-only Renaultsport Clio illustrates that.

And so it proves with the Polo GTI. The numbers might suggest that the three-pedal Volkswagen offers the same performance, but the manual's additional torque manifests itself on the road with seemingly greater in-gear urgency and faster response. It's a cracking engine, with an impressive keenness to rev. Yet the substantial midrange urge makes for a less frenetic pace when you're in less of a rush. The DSG is as quick and smooth shifting as ever in auto mode, but it feels somewhat detached in comparison, even if it does gain an extra ratio.

Decent pedal spacing allows for throttle-blipped downshifts. The shift quality itself is predictable, with Volkswagen's signature springiness allied to decent accuracy. It's just a shame the gearstick isn't capped with something a little more tactile than a plastic-topped sphere—no fancy, dimpled golf-ball-like knobs like its bigger relation.

An oversight perhaps, because the interior otherwise echoes that of its Golf GTI sibling, right down to the brilliantly supportive sports seats covered in signature black/gray/red plaid, with red pinstriping and stitching here and there. Otherwise, it's business as usual: an impeccably built interior short on flair, but high on functionality and user-friendliness.

A flat-bottomed wheel reminds us of the Polo GTI's sportiness, if all those red stripes aren't enough. What's apparent is how VW has connected it to the front wheels, with an entirely new electro-mechanical setup. Response is quick and the nose is eager, if not quite as precise as some. There's precious little feel at the steering wheel's rim, but enough to convey the front end's typical press-on nature if corner entry speed is a little too ambitious, or if steering inputs are too abrupt.

There's some adjustability to the chassis. Back off mid-bend and the rear will come into play. Not in the wild, abundant fashion that's possible in a Fiesta ST at its best, but it's amusingly mobile, even if it retains its overall inherent Volkswagen sensibleness.

It's still worth checking the box for the Sport Performance Kit, which adds (among other things) electronic dampers. Press the Sport button and the suspension becomes tauter, the steering gains some heft, and the throttle map changes for quicker response. It'll make the DSG shifts brisker, too.

Further adjustment in the Polo GTI's makeup comes courtesy of the stepped ESP and traction control system. The ESC Sport setting enables that amusing mid-corner throttle adjustability. It's all impressively integrated and rarely, if ever, intrusive. The XDS+ torque vectoring system, borrowed from the Golf GTI, also helps sharpen turn-in, braking the inside wheel to turn the nose, while the brakes themselves prove powerful, progressive, and unlikely to run out of stopping power.

All rather enjoyable. And although the Polo GTI is significantly improved, Volkswagen isn't the type of company to offer its smallest hot hatch with some of the more indulgent delights of its rivals. It feels closer to its Golf relation than ever before, however, which is a good thing. It's just not quite the wild child the 2015 model year improvements suggest it really could be. 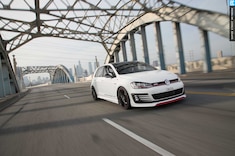