This first drive of the 2016 Mercedes-Maybach S600 comes not from behind the steering wheel, as most first drives do, but from the rear quarters. Because this is where it's all happening. Especially the reclining seats—with calf support—that bring a new sumptuous level of meaning to the word "plush" and make a first-class air passenger kick himself for slumming it.

Which brings us closer to the optional deep pile carpet and more inclined to sip chilled champagne (stored in a cabinet between the two rear seats) from silver-plated flutes held in place by magnetic "cup" holders. Then we can all appreciate the fact that, from the rear quarters, this is the quietest production limousine in the world (according to Mercedes-Benz).

Several factors go into this mobile oasis of calm. The windows are double glazed, with a heat-reflecting transparent foil acting as the filling in a glass sandwich. And the rear doors are 2.6 inches shorter than the regular S-Class sedan's on which this transport of delight is based. This cuts down on vibration, but doesn't hinder getting in and out. Even the rear seatbelt reels are surrounded in sound insulation.

The C-pillar (where the Maybach badge is situated) is noticeably wider than that of a regular S, but rear quarter-lights prevent the cabin from becoming claustrophobic. When greater privacy is required, a triangular sunshade hums into place, along with shades for the main windows and rear glass.

For the occupant lucky enough to be behind the front passenger seat, that chair can move far forward for maximum rear legroom. Not that sitting behind the driver is the short straw, but we all know where a basketball star and his wife would sit. In either fine leather-covered throne, there's the possibility of a "hot stone" massage (which could be most welcome after a tough game), watching a DVD (each passenger has his/her own video and audio channel) or just chilling out to a Burmester 3-D surround-sound system with the quality, clarity, and power (24 speakers, 1,540 watts) to make a Bose technician want to kick himself.

Here's a nice touch concerning the audio system: There's a microphone in the rearview mirror that picks up what the front occupants are saying and plays it through the rear speakers. This saves someone from turning around to carry on a conversation with those in the back. This is typical of the attention to detail that pervades the Maybach. Example two: the ends of the dashboard, which are only visible when the front doors are open. They could have been covered in vinyl, and it's doubtful that many people would care. But Mercedes would have had collective insomnia if these sections weren't finished in the same quality hide as the rest of the car. Everything that's touched, everything that's seen has been assessed and made as wonderful as it can be.

On reflection, this car is perhaps how Mercedes-Benz should have played the Maybach card from the outset. When the company first revived Maybach in 2002, it was a luxury marque based on the S-Class (a generation that was already coming up for renewal) that was intended to slot in at the Rolls-Royce level of things. But the brand didn't mean much outside Germany, where it was one of those venerated names from the 1930s. So it was discontinued in 2012, only to be resurrected now as part of the Mercedes-Maybach sub-brand; just as AMG models are now Mercedes-AMG. What this does is keep the Mercedes name to the forefront. As it should be, because the three-pointed star is synonymous with luxury and exemplary engineering.

Speaking of which, the current S-Class is a technological masterpiece, with systems that will read the road and adjust the suspension accordingly, provide a head-up display, act as a virtual co-driver with intelligent cruise control, plus a raft of other safety and convenience features. They're all here in the Maybach, along with another 7.9 inches of rear legroom compared with the long-wheelbase S, which is the only version imported to the United States. Headroom has expanded a touch, too.

OK, so here's the view from the driver seat. With 530 hp and 612 lb-ft of torque—from a twin-turbo, 6.0L V-12—there's plenty of muscle to make the Maybach feel smaller than it is. Not exactly 3 Series-sized, but enough to tempt a chauffeur to take the interesting way home after a day's work. The car's tidy handling and steering assistance can also be a virtue when having to change lanes abruptly; it'll keep the employers back there unflustered.

The list could go on: brushed aluminum exterior window trim; aluminum hood, doors, and trunk lid; color-matched seat control buttons, heated armrests, IWC analogue clock in the dash, an ionizer that carries fragrances on its gentle breezes, leather-covered folding tables, Peltier technology that keeps cold drinks cold and hot drinks hot, a predominantly handbuilt cabin, and airbags within the rear seatbelts. But here's the real kicker. The '16 Mercedes-Maybach S600 starts at $190,275, including destination. Compare that with a Rolls-Royce Ghost, which is based on the BWM 7 Series and costs $263,200. Suddenly, the Maybach looks like a bargain. Not a word usually associated with Mercedes-Benz. Or, indeed, ever spending that kind of money.

Naturally, there are ways of parting with more. Options include sunroofs with Magic Sky control (where the glass becomes darker at the touch of a button), and if someone had a specific request—like duck egg blue leather upholstery—no doubt Mercedes would do its best to comply.

Expect more from Mercedes-Maybach in months to come. An all-wheel-drive version is due in June 2015. An even longer, more stately Pullman variant is also on the way. But don't be surprised if a super-luxurious E-Class and GL-Class might also wear the double-M Maybach Manufaktur badge. In the meantime, the Maybach S600 is one of the most pleasant ways of getting from here to there. In any seat. 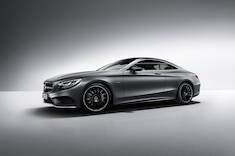 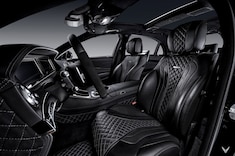 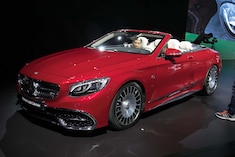 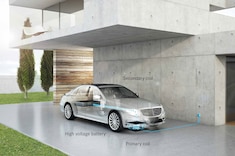