Porsche Has Given Enthusiasts The Best 911 Yet 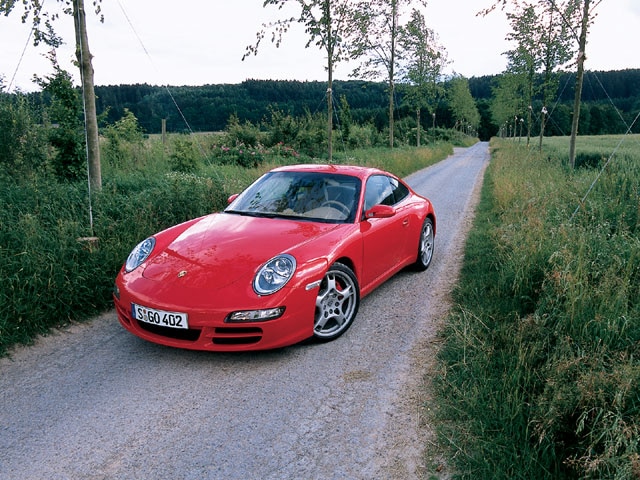 Designing to fit the 911 heritage is a big challenge. While it's a sports car, there's also that strong daily-use quotient. Your margin is greatly narrowed," said Grant Larson on Porsche's newest 997 Carrera and Carrera S. Larson, who had designed the Boxster concept and production cars, and supervised the appearance of the new Carrera GT, also penned the lines that make the new 911 seem so Porsche-like.

"My goal was to tighten everything up, to make the whole car look more technical, more precise, more agile. There were things that I wanted to work with, in the graphics of the lights, to tighten the waist, to widen the hips." His work and engineering efforts also reduced drag from 0.30 for the 996 to 0.28 for the base Carrera. "After my first drive, I was really happy. This car drives with all the mannerisms I had in mind when I designed it," Larson said.

Bringing those mannerisms to the road was a daunting task. Beginning in late 1998, a group of 20 people from engineering, styling, pre-development group and sales, began making concept studies outlining their goals. For Stefan Knirsch, powertrain manager, his was clear.

"You always want more power in the next generation of any Porsche," he said. Knirsch and his staff came up with intake and exhaust modifications to the familiar 3.6-liter watercooled flat-six from the 996 that add 5 bhp to reach 325 at 6800 rpm for the "base" Carrera. Torque remains at 273 lb-ft at 4250 rpm. Enlarging cylinder bore from 96mm to 99 but keeping stroke at 82.8mm brought S engine displacement to 3.8 liters. Using narrower, shorter intake manifolds and a two-piece resonance chamber, it develops 355 bhp at 6600 rpm. Torque is 295 lb-ft at 4600. These statistics translate to acceleration from 0-to-60 mph in 4.8 sec. for the Carrera and 4.6 for the S. Porsche quotes top speeds at 177 and 182 mph. This is the first time since 1977 that Porsche has offered two normally aspirated engine variants simultaneously

"Grant Larson made his first sketches with wider tires," August Achleitner explained. Achleitner is manager of the 911 Carrera model range. "It became clear that this choice had wide ranging ramifications." These tires increased loads under cornering, acceleration and braking so greatly that they literally destroyed the first prototypes in late 2001. It forced body, chassis and suspension engineers to redesign much more of the car than they anticipated.

Beginning with the unibody of the 996, they developed techniques to weld and glue components. These methods increased body rigidity by 8%. Additional reinforcement and adhesives resulted in a 40% increase in chassis stiffness. Achleitner was one of several engineers boasting that the new 997 was 80% changed from the 996. More than half of that is beneath the surface. Not a single suspension piece is interchangeable. (The 20% unchanged includes things such as the roof panel, the interior rear seats and the 3.6-liter engine block, crankshaft and its pistons.)

The 19-in. wheels forced powertrain engineers to rework the gearboxes. The larger rolling circumference required shorter final-drive gears to make the best use of engine torque and horsepower. This gave Porsche's wizards the opportunity to address other concerns in both the Tiptronic and manual transmissions, shortening the shift linkage and improving and adding synchros on the six-speed, and quickening shifts on the Tiptronic.

The new car with bigger tires brought Weissach's next suspension and handling advance into play. The Porsche Active Suspension Management, or PASM, is standard on the Carrera S and optional for the Carrera. The improved handling this system offered, plus a goal to enhance frontal crash safety, resulted in widening the front track 21mm (0.83 in.) This reduced body sway and increased anti-roll stability.

A new power-assisted rack-and-pinion steering system-Porsche's first for the 911-works through a variable-rate transmission. In the center, the ratio remains at 17.7:1, comparable to the 996. Turn the wheel more than 30 degrees and the 2.98-turns lock-to-lock quickens to 2.62 (13.8:1.) Parking is much easier and low-speed maneuverability is go-kart-like. Porsche also made the steering wheel adjustable by 40mm (1.57 in.) up-and-down and forward-and-aft.

Rear axle track was spread by 34mm (1.34 in.) to accommodate the tires. This further enhanced handling. Couple all of this with the PASM and the Carrera S driver has two cars in one. In "normal" mode, the 997 offers a comfortable ride with small and medium bump modulation slightly softer than the standard suspension on the base Carrera. Switching to "sport" mode lowers the car by 10mm, (0.39 in. in Europe; for the U.S., figures are likely to be 8mm or about 0.31 in. to accommodate our driveways and curbs.) As the car descends, shock damping stiffens and its response quickens. This yields crisper handling, less body roll and greater agility.

Porsche's Walter Rohrl, lapping Nrburgring with a PASM-equipped car, cut 5 sec. off his "normal" suspension lap times when he set PASM in "sport." What's more, if the driver leaves the car in "normal" and begins maneuvering aggressively, the system advances settings toward "sport" configurations. On the road, PASM disallows grand-standing, tail-sliding performances. But it enables exhilarating travel through twisty, hilly country at nearly irresponsible rates of speed.

"It was the last changes in PASM software in March 2004 that made the car," Achleitner emphasized. "We drove the car and thought, 'This can be better.' At the end of the development process we weighed riding comfort, a stiff feeling versus a smooth ride. We weren't quite satisfied with small bump response in the 'normal' setting; it still was a little too hard. So we changed the timing of how quickly the characteristics can change the suspension from one input to the next."

Porsche has always been known for exceptional brakes. The Carrera provides four-piston, cross-drilled 318mm (12.51-in.) discs at front and 299mm (11.77-in.) rotors at the rear, the same as the 996. However, engineers increased brake servo boost by 17%, which provides drivers more spontaneous response while reducing pedal pressure. Carrera models get black-painted calipers. S models inherited the 996 Turbo's 330mm (13 in.) rotors with red-painted calipers. Porsche's new ceramic composite brakes (PCCB) are options for both models. These 350mm (13.78 in.) rotors with their bright yellow calipers save 34.4 lb in unsprung mass.

In the German world of three-lane autobahnen with unrestricted speed, the new ceramic brakes further the impression this car gives of unerring competence. Keeping up with traffic at 135 mph, an interloper doing perhaps 85 segued into our path 40 yards ahead of us. It took more effort to catch our breath than to haul the 997 down to match speeds. When the intruder resumed his place in lane two, we accelerated quickly back to 135 and continued hurtling past the slower traffic

One other impression is notable. At 135 mph in other cars (and in some of previous 911s) conversations ceased. In this new car, engine noise intruded adequately to remind us what we were doing and how quickly we were doing it. Still, it was muted enough that my colleague and I fell silent as it struck us that we had been talking, not shouting.

Except for its back seats, the interior is nearly all new. There are four seat options to satisfy most backs and body shapes. All are very comfortable and supportive with headrests 2 in. higher and angled closer for better support. Six airbags surround the driver and passenger. Music can come from an optional Bose 13-speaker surround sound system integrated into the standard DVD navigation system. Perhaps the most entertaining option is Porsche's Sports Chrono Program with its flip-up time-piece. A steering-wheel mounted paddle starts, stops and accumulates times for laps on track days or honey-do-errands around town. A combination of buttons then reveals all the data graph-like on the navigation system screen in the console.

"The big giants have discovered the sports car as a marketing niche," Peter Schwarzenbauer, CEO of Porsche Cars NA, said. "The 911 reigns above the competition by its character alone. It is unique, discrete, elegant. Its silhouette exudes understatement. Anytime we change the 911, there is a debate among our customers as to whether we've gone too far or not far enough."

The murmur of response is building. Porsche has given enthusiasts the best 911 yet.