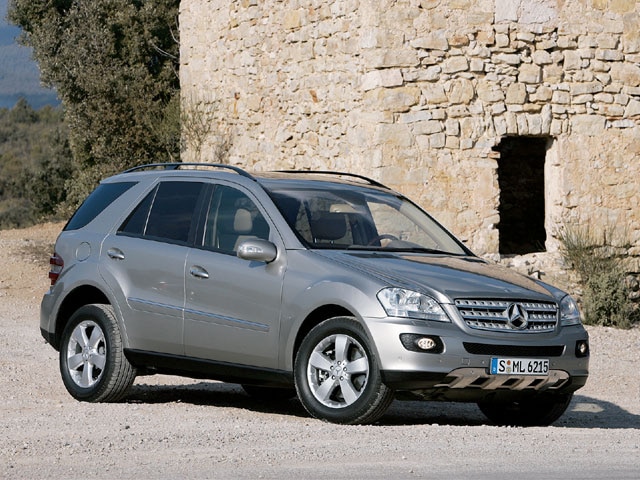 Sleek is hardly a word you associate with SUVs, but the new, larger Mercedes-Benz ML has a dynamic tension in its design that is almost unknown in this class. It achieves a balance between the two diametrically opposed states of tough and elegant, like Tony Soprano in an Armani sports jacket. The new ML also measures well in the wind tunnel. Its drag coefficient of just 0.34 (the original ML's was 0.39) is the best in its class, and along with its low curb weight, contributes to its outstanding performance and fuel economy. Where the original ML had a ladder-frame chassis, the new car uses a monocoque steel bodyshell for lower weight and superior torsional stiffness. Where the entry-level ML350 tipped the scales at 4,800 pounds, the latest ML350 weighs just 4,500 despite being larger and more rigid in every dimension.

Unlike the early examples of its predecessor, the new ML looks and feels like a premium car inside and out. Even with two wheels in the air on the tough off-road course, I could not detect any squeaks or rattles from the trim. To my eyes, the new ML has the best interior design of any off-roader currently on sale. Just like the exterior, the cabin is modern but totally functional in the way the major controls and minor buttons have been designed and grouped. That said, the interior is color dependent. The cream leather in our test car was classy, and made the interior look and feel light and airy. A full-length glass roof is on the cards for later on. The black interior in another car was dowdy; the ML is a big car, so whatever trim color you choose, there's going to be a lot of it.

The same manual gear select buttons that have begun to appear behind the steering wheels of recent Mercedes models are here too, so enthusiasts can play F1 driver on twisty roads or simply utilize full engine braking when descending hills. The ubiquitous 7G-Tronic gearbox is mated to all engine versions and works seamlessly. At speed, the cabin of the ML500 flagship model is hushed, the big V8 just a distant murmur until you nail the throttle and bring the 302 horses into play. Then the muscle car rumble picks up a few decibels, its thrust palpable as the speedometer needle arcs convincingly around the dial. With a zero to 62 mph time of 6.9 seconds and a 150 mph top speed, the ML500 is a seriously quick 4x4, so the AMG version should be a real flyer.

The ML350 will likely be the staple petrol model, and with 268 bhp has convincing performance. Its 8.4-second zero to 62 mph time and 140 mph top speed is more than adequate for most people. With 258 lb-ft of torque from 2400 to 5000 rpm, it's also pretty effective off-road as we experienced on the test course. The steel sprung ML has a reasonably good ride, but short, sharp bumps come through in a similar way to the base models of the X5 and Touareg. I would recommend the air suspension option, which gives the ML a ride not far off an S Class and really excellent handling for an SUV. An all-new double wishbone front suspension, with the top wishbone placed high on the suspension strut, allows good axle articulation off-road. The new four-link independent rear has two rubber and two hydro bearings decoupling the rear subframe from road noise intrusion. The standard suspension uses conventional steel springs and dampers and has a standard 210mm ground clearance. AirMatic air suspension is an option on all models. Standard ground clearance is 181mm and the system drops ride height a further 15mm at 87 mph to aid aerodynamics and stability.

The off-road ABS system works in low range only and allows the tires to build up a wedge in front to aid stopping on loose surfaces. Off-road ASR is also programmed for maximum traction on loose surfaces. The Downhill Speed Regulator limits speed on steep descents. An exact speed can also be set by the speed limiter/cruise control stalk. The electronically controlled 4ETS Plus permanent four-wheel-drive system runs a 50/50 torque split on a dry road, but shuffles power to all four wheels or to even just to one if traction is an issue. The optional Off-Road Pro engineering package (1,914 Euro in Germany), comes with center and rear locking differentials, enabling it to tackle serious off-road work. The rear diff offers up to 100 percent lock. This package also provides an even greater range of ride height adjustment, 125mm between highest and lowest settings in three steps. The highest 291mm setting is 30mm higher than even the G-Wagens.

Combining the Range Rover's ride quality and off-road ability with the performance and handling of the X5, the build quality of the Touareg and clothed in a package with more styling panache than any of them makes the new ML a very strong and even handed argument. When equipped with AirMatic suspension and either the 5.0-liter V8, or in Europe the 3.0-liter V6 turbodiesel, the Mercedes ML undoubtedly sets a new class benchmark. 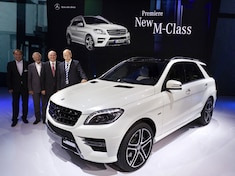 Read about the all-new third generation Mercedes-Benz M-Class. The new M-Class will make its U.S. retail debut in September 2011 and will be available in two models: ML350 4MATIC and ML350 BlueTEC. - European Car Magazine