Come Back Toward The Light 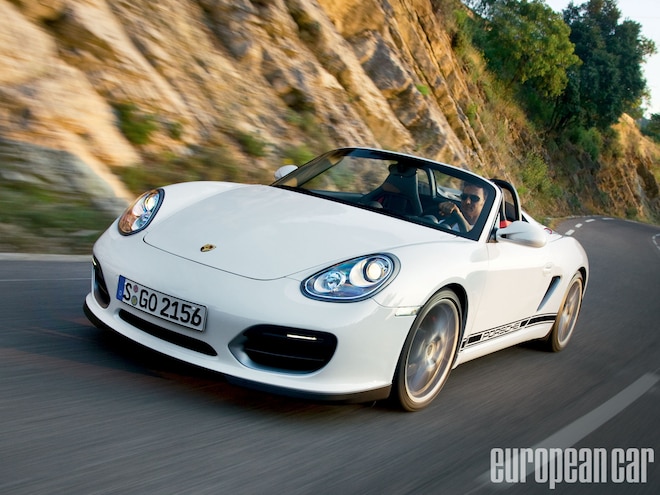 New Cars + New Gear + New Technology
First Drive
There could be no better arena for driving a new drop-top sports car than the hills of Northern California-maybe some as good, but none better. Granted, it can be a little chilly in December, but as long as the sun is shining and you remembered your scarf and driving gloves (thoughtfully provided by Porsche), the feeling can't be described as anything so much as euphoric. 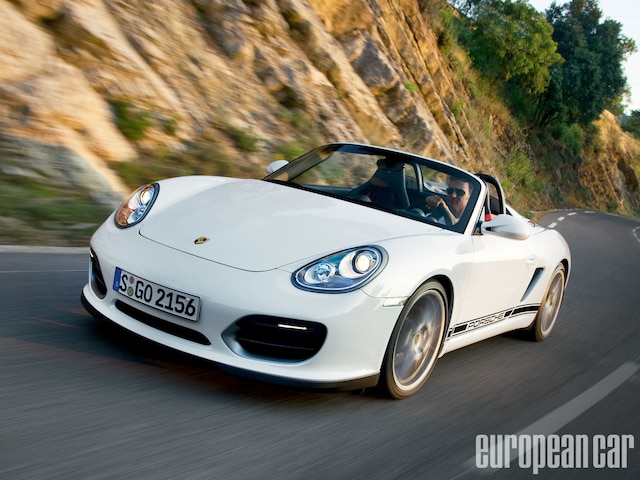 That's where we found ourselves, in Carmel Valley outside Monterey, behind the wheel of the new 2011 Boxster Spyder, a new, lighter version of the topless two-seater. And the Spyder truly is meant to go topless. Actually, it does come with a top-constructed mainly as a skin of fabric, what the company calls a "sunsail," which stretches across a light, manually folding carbon frame. But there's no automatic operation, no self-actuating moving parts. If it starts to rain in the middle of your session, you'd better hope you've got the deployment procedure well practiced, because you'll have to physically get out of the car and put it on yourself.

And that's the whole the point. The Spyder is meant to be a more minimalist, purer driver's car. Along with saving weight, that top, along with lower and lighter side windows, improves driving dynamics by lowering the car's center of gravity and reducing its roll angle.

Other lightweight additions-replacements really-include aluminum doors (with leather pull-straps on the inside instead of latch-type releases) and a single-piece aluminum decklid (which looks fantastic) enclosing the engine, along with lighter ten-spoke wheels and an incredible pair of carbon-backed bucket seats. Subtractions include standard elimination of both the stereo and the air conditioning, though both of those can be added back in as no-cost options if you so desire.

The changes amount to 176 pounds of weight savings over the Boxster S when both cars are equipped with a traditional manual transmission. As with the S, a six-speed manual gearbox is standard on the Spyder. The dual-clutch, seven-speed PDK automated manual is also available as an option and adds about 25 pounds-still making a so-equipped Spyder a good 150 pounds lighter than a manual-tranny S.

The Spyder is also now the most powerful car in the Boxster range, pushing about 10 horses more than the S for a total of 320 hp. So in its most spartan form, the Boxster Spyder achieves a power-to-weight ratio of less than 4kg (around 8.5 pounds) per horsepower unit, and in fact holds a better power/weight ratio than even the 911 Carrera S, which should say something.

So it's fast. More incredible is its agility, changing directions and turning into and out of corners with great enthusiasm.

But perhaps still more amazing is the driving feel, mainly through the steering wheel and suspension. Small changes have been made to the car's underpinnings, including shorter and more rigid springs so that overall it sits more than a quarter inch lower than the S, as well as stiffer dampers and "modified" front and rear anti-roll bars. Track is also slightly wider, by 0.16-inch and 0.32-inch front and rear, respectively. And those lightweight wheels offer reduced unsprung weight for improved steering precision.

All of that considered, the Boxster Spyder offers a lot of subtle improvements that add up to an overall very different sort of driving experience. I don't really want to say better than the S, just a lot different. It won't be the Boxster for everybody, but if you're hardwired as a driving enthusiast and a Porschephile at heart, you probably need to check it out.

Slinging it through winding ribbons of road in the Northern Cal backcountry that are sometimes little more than a single lane wide; pounding over rippling sections of pavement and feeling the suspension flex; whipping around near-hairpins that the Spyder magically turned into sweeping turns, feeling the jarring pulses through palms, legs and arse... I heard a small, still voice in the back of my mind. It kept whispering GT3, over and over.

Maybe the Boxster Spyder isn't quite as fast or gut-wrenchingly visceral as the 911 GT3, but it doesn't seem such a stretch to call it the GT3 of the mid-engine line.

The Boxster Spyder will become available in February and start just over $61,000 (sans $950 destination charge), the sum of which can be augmented with all those goodies from the option list, including the mentioned PDK gearbox, carbon ceramic brake rotors, and Porsche Communication Management (PCM) as the central control unit for audio, comm, and navigation functions, along with iPod integration.

The Sport Chrono Package is also offered, giving you the nifty dash-mounted stopwatch, and more importantly, a Sport button to dial back PSM stability management interference if you really want to drive hard. Equipping the car with PDK adds a Sport Plus switch, which dials the intervention threshold back even further, and a launch control program, which can shave tenths of seconds off acceleration times.

Like I said, it won't be for everyone. Given the severity of pavement and the tenderness of your derriere, the Spyder could conceivably beat the hell out of you. But for some, those who like to drive all day over every kind of pavement and every now and then emerge stiff and sore (but grinning like a fool), it's an endearing characteristic. And that's not even considering how the car would behave on glass-smooth race-track pavement. I gotta think it'd be spectacular.