Third generation is the charm Sport utility vehicles ain’t what they used to be. Thank goodness. Most of us really don’t need an old-school, body-on-frame, gas-guzzling galoot. Mercedes-Benz knows this and has given us the M-Class midsize crossover, made with a unibody construction. Sorry to use the cliché “car-like” but that’s exactly what it is.

Another upside is that this is now generation three. Each successive generation has shown an improvement over the last and the maturity has become evident.

With maturity comes a certain conformity. This new-for-2012 model has updated its predecessor’s visual panache with more of a corporate face, although the shiny skidplates front and rear brighten things up. And there’s still a distinctive C-pillar design. Crucially, the vehicle is wider, longer and lower, with more of a swept-back look. This goes a substantial way in making it seem a lot less lumbering than many of its rivals.

Cleverly, this more streamlined look does nothing to trespass upon passenger or cargo space, of which there is plenty. The best thing about the interior, though, is its upscale, hushed-as-a-monastery air, sporting good-quality plastics and decent leather. The dash is laid out in a tidy, logical manner and the front seat adjusters are now located in the top sections of the door panels, a proper Mercedes-Benz trait.

Another thing that’s essentially Benz is the option of a quiet-running, low-emissions, high-economy diesel engine, as in the ML350 Bluetec 4Matic (all-wheel-drive is standard). Behind this misleading badge is a 3.0-liter turbocharged V6. And not just the same unit carried over from before. This one is 14 percent more powerful, developing 240 hp and a satisfying 455 lb-ft of torque. Such generous twist is available at only 1600 rpm, delivering a surge of acceleration a gasoline engine would be proud to emulate. Yet no similarly punchy petrol-powered engine in a machine of this mass could return 20 mpg in the city and 25 on the highway.

For those who still haven’t seen the diesel light, there’s the ML350 4Matic with a 3.5-liter V6 that gives 17 miles per gallon of gas in the city, 22 on the highway. The 302 hp and 273 lb-ft of torque impart a useful amount of push, enough to challenge the chassis a bit. Which is extremely composed yet comfortable. A tight bend taken quickly will inevitably induce understeer, but modulating the throttle does the job of keeping it on line and in shape. Thanks in part to a setup that keeps this crossover remarkably flat, fighting against leaning and pitching all the way. There is the option of a Dynamic Handling Package, for $5,150, that has adaptive air suspension and a roll mitigation feature, but the standard suspension is still pretty good. Talking of options, heated/cooled cup holders join satellite navigation, a rear-view camera and blind spot monitoring on that list; standard equipment includes a seven-speed automatic transmission, eucalyptus wood trim, driver attention assist, Bluetooth and a power liftgate.

The M-Class came into this world in 1997 and quickly developed a reputation for not being up to the usual Benz build standards. If generation two started eroding that image, generation three eradicates it completely, even though the vehicle still comes from the same Alabama assembly plant. Should any driver wish to take their new M-Class actually off-road, they will find this model will negotiate deep mud-track ruts without a squeak or creak of protest coming from the dashboard: always a sign of how well a 4x4 is put together.

There probably won’t be any protests from the bank, either. The 2012 M-Class is priced the same as the outgoing model, from $49,865 (including destination). Taking into account (pardon the pun) the extra content, that represents a better deal than before. Mercedes-Benz reckons it works out to a 3.2 percent more advantageous proposition. Buying the Bluetec diesel model costs a further $1,500, which is also a relative bargain, given the torque-to-low emissions ratio. Some of us may have negative opinions of sport utility vehicles, but should location and/or family issues necessitate buying one, then something like this is far more palatable than the old guard. 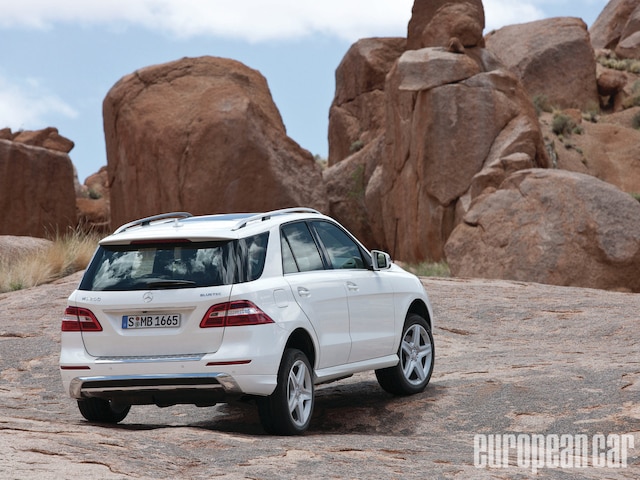 Check out the new 2006 Mercedes-Benz ML500, a very strong and even handed argument - European Car Magazine