Big fun in a little package. 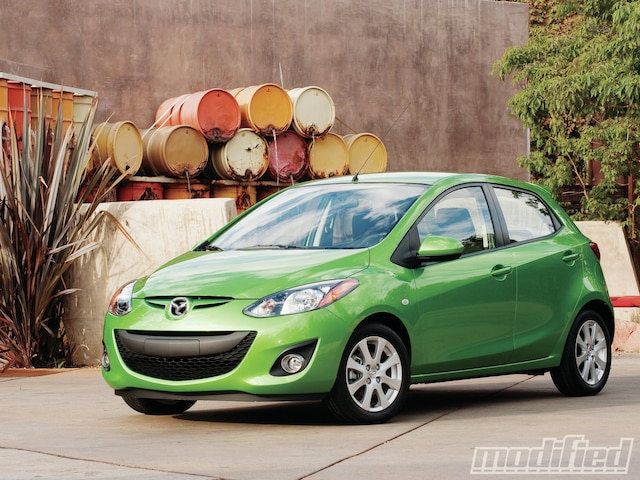 It’s time to face the facts. More and more auto manufacturers are building smaller cars, and while these B-spec autos don’t offer gobs of power or razor-sharp handling characteristics, they still capture some of the traits that make a car fun to drive. And the Mazda2 delivers that in more ways than one.

Believe it or not, the Mazda2 is lighter than a Miata (weighing in at 2,306 lbs compared to the 2,480 lbs), and because of its featherweight category, the Mazda2 delivers a solid punch from its 1.5-liter, 100hp and 98ft-lbs of torque inline-four. Pair it with a 5-speed manual transmission, and all of a sudden, the 2 becomes quite a blast to whip around in.

The powerplant can’t take most of the credit (actually it’s a small factor in why the 2 is so fun). Thanks largely to its nicely set-up independent suspension, the Mazda2 is surprisingly sharp in the corners, which led us to believe that some of the Miata’s driving characteristics have been passed down to its smaller FWD sibling. Even the brakes feel adequate for spirited driving. Not that you will be doing racing around in a car like this, but if you decide to do so, you won’t be dipping under 27 mpg that’s what we saw when driving the snot of out of the 2. Drive it like a normal human being, and the little 1.5-liter will reward you with 29 mpg in the city and 35 mpg highway. Not too shabby at all.

Since the Mazda2 delivers so much in the driving department, it’s got to have some shortcomings after all, it’s a $14K vehicle. That being said, the interior is a bit bland and plastic-feeling. It could use some color accents to liven it up, but for someone who isn’t looking for all the amenities, it gets a passing grade. The bonus for a car this small is that is has a usable back seat, which you can cram three people into. Long road trips could have cramp-ridden passengers, but around-town jaunts should come with no complaints.

The Mazda2 reaches out to buyers who are looking for a no-frills, small, inexpensive and fuel-efficient vehicle. It proves that being low cost doesn’t have to mean being bland and boring. Instead, it packs a whole lot of driving excitement without pretending to be something it’s not. Zoom-Zoom is alive and well in the Mazda2. 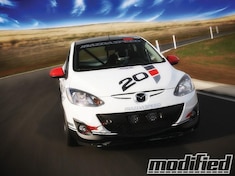 The Pirelli World Challenge Championship has added a B-Spec class for three of their race weekends, beginning at Miller Motorsports Park in Tooele, Utah. Click to read about the Mazda2 B-Spec professional racing debut. - Modified Magazine 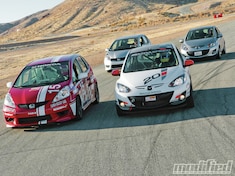 It’s been a few years in the making, but Honda and Mazda’s tag-team effort to join forces with the SCCA and create a B-segment-specific racing series have been successful. Click to read about the B-Spec series hitting the track in 2012. - Modified Magazine 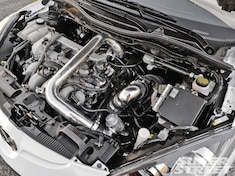 Our eyebrows got a rise when we heard Mazda had shoehorned a Mazdaspeed3 powerplant into the mighty mite’s engine bay. Dubbed the Turbo2, the car runs a 2.3-liter Direct Injection Spark Ignition (DISI) turbo MZR engine rated at 263 horsepower, that’s plus 163 ponies over stock. Click to keep reading about Mazda droping a "boosted big-block" into their Mazda2 body. - Super Street Magazine 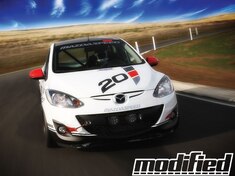 The Mazda 2Evil was designed to illustrate that one car can serve two masters: the daily grind to work and weekend warrior duties on the track. Check out this special concept here at Modified Magazine.