SuperStreetOnline how to
Project SRT-4: Part V
Our long-term project SRT is upgraded with a side-exit exhaust, a Mopar short shifter and a DC Sports strut bar.
Dave Coleman – Dec 21, 2005 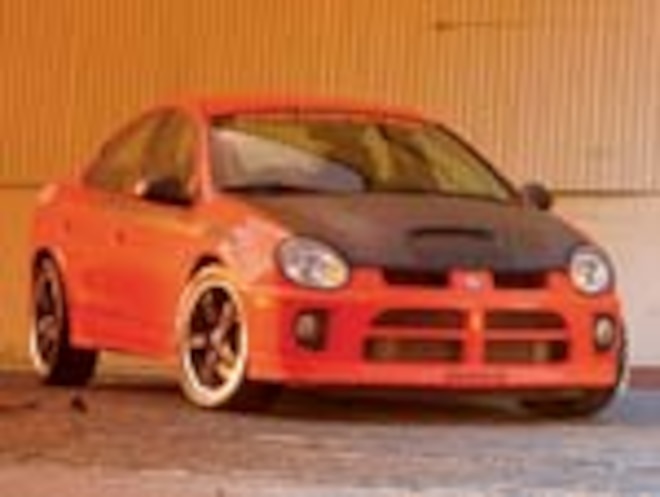 Project Dodge SRT-4: Part IV
Project SRT-4 is turning into a more serious driver's tool every month. With decent stick, big power and monster brakes, it's getting easier and easier to hunt EVOs and WRXs in this low-budget, big-boost econobox. This month, we add to Project SRT-4's arsenal
Jun 19, 2004
SuperStreetOnline
SuperStreetOnline Magazine
how to

Project Dodge SRT-4
Going fast comes with a cost. Everyone who's played with cars knows this. Traditionally, that cost goes toward horsepower parts. But anyone who's gone fast long enough knows the benefits of being able to stop.
May 1, 2004
SuperStreetOnline
SuperStreetOnline Magazine
how to

Project Dodge SRT-4: Part II
Project SRT-4 is fun to drive. Not goofy fun like a fat girl on a moped; rather, the little Mopar is fun like its automotive brethren, the muscle cars of yesteryear. It boils automotive good times down to the most basic form: Cheap, smoky burnouts.
Mar 17, 2004
SuperStreetOnline
SuperStreetOnline Magazine
how to

Project Dodge SRT-4: Part I
Nineteen sixty-four Pontiac GTO, 1962 Chevy Impala SS 409, 1969 Chevy Camaro, 1970 Plymouth AAR Cuda, 2003 Dodge SRT-4--musclecars, every one. Dodge reinvented the classic formula for performance last year when it crammed a huge engine in a small body and crea
Jan 7, 2004
SuperStreetOnline how to
Under the Hood: DodgeSRT-4
If the Dodge SRT-4 needs anything, it's a limited-slip differential, not more power. For 2004, it's getting both. In addition to a factory-installed Quaife differential, the new SRT-4 is getting a ratings boost from 215 hp to 230. As anyone with a right foot a
Dave Coleman – Sep 19, 2003

SuperStreetOnline how to
Project Dodge Neon: Part 1
Several moons ago, our engineering editor, Dave Coleman, made a comment in his nerdy "Technobabble" that he had yet to see a fast Neon. This low-down, thinly veiled insult caused Coleman to be burned in effigy by a mob of enraged Mopar lovers in our parking lo
Mike Kojima – Jul 17, 2002

SuperStreetOnline how to
Project Dodge Neon: Part 2
In our first installment of Project Neon, we tweaked the suspension of our underrated underdog. Now we're turning our efforts to the underachieving SOHC engine. As we said before, we didn't start with the DOHC Neon, because the SOHC Neon is more common. Beside
Mike Kojima – Jul 12, 2002