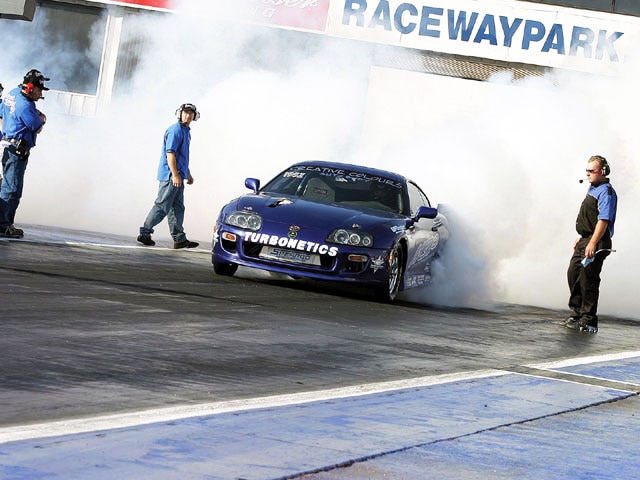 There are several reasons why the Englishtown, New Jersey track is a firm favorite of most racers. The facility is first rate and the track always hooks up well, thanks to expert preparation. The sea-level altitude and favorable weather conditions ensure that a racecar will always run at its best and the fans are simply awesome. Huge crowds are the norm at the Englishtown track and the enthusiasm of the fans is a sight to behold. When the NHRA Sport Compact series comes to E-Town, it turns into a two-day frenzy of fast cars, exuberant crowds and killer race action and the Weekend of May 3rd and 4th was no exception.

Qualifying
The qualifying sessions at E-Town saw some all-out action as the best in the business fought it out to decide the running order for Sunday's elimination rounds. Track conditions were ideal and it was evident from the times that were posted that this was going to be a weekend to remember.

In the all-motor class, Moroso winner Ken Scheepers led the field with a 10.408 at 128.85mph just ahead of Norris Prayoonto (Integra) and last years champion, Jesus Padilla (RX7).

The depth of the field was obvious with the top-four driver all posting sub-10.5second passes.

In the Hot-Rod class, Marty Ladwig was flying in his automatic-equipped Pontiac Sunfire. The rest of the competitors were left in his dust as Ladwig blasted to a new national record with an 8.533 at 163.59mph. Kenny Tran mounted the strongest challenge with an 8.712 at 165.15mph in the Quaker State Civic but this was to be Ladwig's day.

"I have to congratulate Marty." Tran said. "His car is running great and it is so consistent. He deserves the record. We know what we have to do to compete. Once we overcome our transmission problems we will be able to raise the boost and get back on the pace, but for now we are limited to how much power the transmissions can handle. It's frustrating because we are really taking it easy on our motors and we know we have a lot more power in reserve."

The Modified class was a three-way battle between Cesar Febus, Jimmy O'Connor and Carlos Gonzales.

In the Pro-FWD class Nelson Hoyos made it a great day for GM as he joined Marty Ladwig in a qualifying leading double-act. Hoyos ran an 8.485 at 178.47mph and John Brown followed him with an 8.836 at 144.69mph to claim second. Christian Rado's Celica was once-again, giving Rado a hard time but he still managed to tie up the third position with a 9.443 at 144.69mph.

Rado was not discouraged however. "We are getting really close with the car now. I am pleased with the initial launch but we have been fighting some elusive engine problems that kill the performance down-track. We will get it sorted and then we will be setting the pace for sure."

The flagship Pro-RWD class qualifying sessions were a thriller with a take-no-prisoners battle between the Streetglow Solara's of local favorites George Ioannou and Ara Arslanian and the awesome Turbonetics Celica of Matt Scranton.

Eliminations
Sunday's elimination rounds were the scenes of some of the best racing we have ever witnessed. After an all-night thrash to replace a grenaded block, Cesar Febus was optimistic about his chances in the modified class and Matt Scranton (who also faced a very late night in the pits replacing a motor) looked good to go when the first elimination rounds came around.

The all-motor class looked like it would be a two-horse race between the RX7s of Jesus Padilla and the ever-consistent Ken Scheepers. Then Scheepers broke a rear end in the semi-final, but his bad luck was good for Mopar's Scott Mohler who went on to face Padilla in the final.

Unfortunately Mohler's luck didn't hang around and he threw a rod during the burnout, leaving Padilla to take his first win of the 2003 season with a 10.624 at 123.02mph.

The modified class was also a battle between two drivers: Cesar Febus in the old-school 300ZX and Jimmy O'Connor in the Venom Supra.

Febus was obviously having a little trouble with his car after an all-night wrenching session in the pits. In the final the 300ZX expired early in the run, leaving O'Connor to claim his first Wally of the year with an 8.553 at 136.70mph.

O'Connor was ecstatic to take the victory. "We have been fighting to get the car dialed in and thankfully lady luck was smiling on me today." He commented. "I knew we would need a break to beat Cesar as he is running consistent 7.70s. Maybe this means my luck has finally turned around."

Top qualifier Marty Ladwig was on a roll in the uni-body Hot-Rod class,. After claiming the top qualifying spot and setting a new E.T. class record with an 8.533, Ladwig maximized his points earnings by scything through the field to a final-round appearance against Jo Jo Callos.

After a little gamesmanship by Callos on the line, Ladwig steered the Pontiac Sunfire to an easy win after the Castrol Integra stumbled. Ladwig's 8.724 at 163.73mph was more than enough to claim the second win of the year for the GM Hot-Rod, giving Ladwig a healthy lead in the points chase.

"That was the perfect end to a perfect weekend," Ladwig said. "It's great to get out to an early lead in the championship and the car is running like a champ so I am very optimistic about the rest of the season. I know that it will get harder as the other guy's get their cars sorted out but at least we have a cushion now thanks to the way my Pontiac Sunfire is running."

Kenny Tran was disappointed after a freak problem sidelined him in the second round. "The Quaker State Civic was running great and we were shooting to make a strong pass in the second round. As I launched the car, it just died completely. The battery cut-off switch was faulty and it switched itself off. Needless to say we will have a new one on the car before the Gainesville race."

The Pro-FWD class was the scene of much celebration for the GM backed Bothwell Motorsports team. After Ladwig had clinched a win in the Hot-Rod class, teammate Nelson Hoyos finally won an NHRA event in the Pro-FWD Cavalier. The final round was a rematch of the Moroso final, as Hoyos lined up against John Brown.

As the pair launched, it was neck-and-neck until mid-track when Browns Honda slowed, leaving Hoyos to take the win with an 8.684 at 169.51mph.

" I am so happy to finally get that monkey off my back." Said Hoyos. "The Cavalier ran great and now I feel like I can start to make a habit of winning these races. The team has worked really hard to get us into the winners circle so I have got to thank them all for what they've done."

Of all of the classes in the NHRA Sport Compact series, the Pro-RWD is now probably the most exciting to watch. The battle between the Streetglow Solaras and the Turbonetics Celica has produced some awesome races as records have tumbled. The addition of several other bad-ass cars to the mix has only served to spice up the class even more as the fastest sport compacts in the world go head-to-head.

After qualifying, George Ioannou sat at the top of the hill with Scranton and Papadakis chewing at his heels. Adam Saruwatari claimed a spot in the field in his NSX after the K&N RX7 of Abel Ibarra failed to show due to engine problems.

At the end of the day this was Ioannou's home event and it was going to take a lot to beat him on his own turf. George made a statement in the first round of eliminations as he flew to a new national record with an incredible 6.786 at 205.35mph.

Matt Scranton was not going to make it easy for Ioannou. In the very next race, Scranton ran a 6.745 at 203.46mph to record the quickest ever pass in the NHRA sport compact series.

Unfortunately Scranton did some damage to his Turbonetics Celica during that pass and failed to show up for the semi final race against Saruwatari. On the other side of the ladder, the Streetglow boys put on a show by staging the first ever side-by-side 200mph sport compact race.George Ioannou took the win with a 6.883 at 204.42mph against his teammates 7.221 at 200.32mph. The final race of the weekend saw the Streetglow Solara lined up against the A&L NSX.

When the tree dropped, Saruwatari cut a killer 0.446 light to get the early advantage but the ground pounding Solara simply had too much for the NSX. Iaoannou caught and passed the NSX quickly and passed through the traps with a 6.810 at 204.60mph to clinch the win. What a weekend for Ioannou, as he celebrated the second victory in a row for the Streetglow Solara. " The car ran great and we did what we had to at our home event. The fans were awesome and I had a ball. "

The next event on the NHRA calendar is in Gainesville, Florida on May 17th-18th. This time Scranton will have the home advantage and will be looking for revenge.