The Return Of D1 Grand Prix At Irwindale 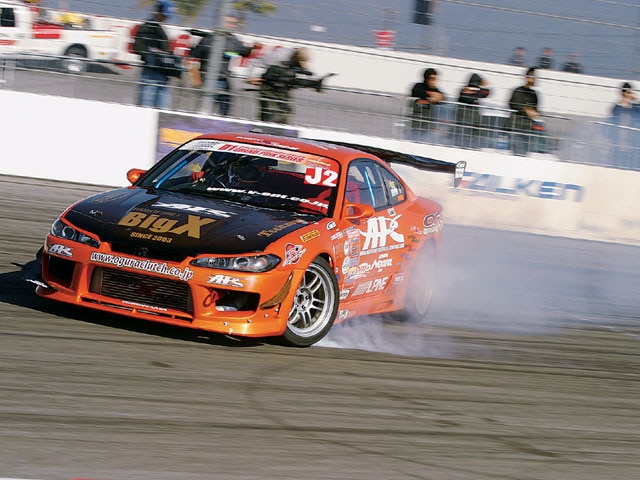 While last year's exhibition round of the Japan D1 Grand Prix series went off with a bang, this year's show was included in the D1 points series. With this in mind all the top racers from Japan came out to collect a few extra points to bring back with them. Over 30 teams from Japan came out to compete, while last year's eight U.S. entries were out to qualify again this year.

New to this year's program was a driver search performed on the Friday before the main event. Six new U.S. drivers were out to make their mark by showing their skills as D1-worthy. Unlike last year's driver search event, this years was a quick gathering of the official D1 judges Tsuchiya, Orido and Suzuki to give a thumbs up or thumbs down. The search included the following U.S. hopefuls: Seigo Yamamoto, Andy Yen, Alex Phiffer, Ben Swartz, Benson Hsu and Chris Forsberg. For more information on the driver search refer to the side bar.

While the 30 Japan and 12 U.S. teams came out to qualify, not all would be granted a run at Saturday's show. Friday consisted of a search for the 33 hopefuls, all striving to make the top spots. Few of the teams had already been granted access to Saturday's event since they were able to make the cut last year. U.S. drivers included Rhys Millen, Dajiro Yoshihara and Ernie Fixmer. Knowing that there were limited spots open, we were bound to see a few spills. According to the D1 judges, "This is the fastest track out of all the D1 stops this year." With that as common knowledge, we knew the teams would push the envelope and speed their vehicles to the 90-plus mph zone. Over the four days of testing, this high-speed track took a total of 16 cars out of the competition with each vehicle hitting the big radius K Rails. Whether it was a miracle or just good vehicle safety, not one spectator or driver was hurt during the entire event.

While the practice rounds were exciting to watch, there was plenty of pit drama that went on. After two rounds of qualifying, 16 teams made the cut. Excluded from the qualified 16 was last year's U.S. D1 champion, Ueo Katsuhiro. Most were really upset about the matter. His second round of qualifying, however, was way off from his first round performance. Not much tire smoke and inconsistent race lines eliminated Ueo from the race. 2003 points champion Youichi Imamura dealt with gremlins for most of the day. During an exhibition round a broken tie rod end caused him to smack the plastic barriers. The A'PEXi team hustled the car back to their R&D facility to fix the problem but, fortunately for Imamura, the team had last year's vehicle on had as a back up. Unable to make the top 16 was Chunky Bai from Tanabe/Signal Auto who did an excellent job to get into the first 33-car field. Making the 16-car field was his teammate Atsushi Kuroi, aka Kool Roy. On the U.S. side, it was obvious that the level for most was an overwhelming experience competing against Japan's best. Out of the 12 U.S. drivers, two would go on to compete in the 16-car field: Samuel Hubinette and Rhys Millen. While Millen worked all week fighting the gremlins on his newly prepped Pontiac GTO, Hubinette campaigned the GReddy Toyota Supra Rhys ran in last year's D1 competition.

The top sixteen were paired up and ready to battle. A few of the highlights included last years D1 points champion Youichi Imamura getting knocked out in a battle with the APC S15 driven by Kumakubo. Also eliminated in the first twin drift runs were both U.S. drivers, Rhys Millen and Samuel Hubinette. It seem that Millen's GTO looked a little too light in the rear, causing him to scrub a lot of speed at the last big turn, eventually letting the Top Speed S15 close the gap on the first run. On the second pass Top Speed pull away from Millen, giving the Japan vehicle the easy win. On the other hand, Hubinette was running consistent lines throughout the day while always being the closest to touching the wall. Unfortunately, on the tandem pass he took the same line as his qualifying pass, letting Nomura close the gap. Once Hubinette learns to change his qualifying line from his twin drift line, he will be unstoppable. It came down to a battle between two S15s with HKS and Kei Office. This was Tanaguchi's second time making the finals in America. If you remember last year's battle The HKS S15 had an incident with the wall, the new HKS car is easily one of the best looking cars out of the group and one could tell the new one is a full race-ready vehicle versus, last year's street model. Three rounds decided the end placing Kazama's Kei Office car ahead of Taniguchi's HKS S15. This placed Ken Nomura's Blitz ER34 in the third place spot. While the organization of the event was less desired, it was still one of the best turnouts in the States. Rumor has it D1 will hold a driver search in July and another type of event in November. See you next time.

D1's American Idols
Three New U.S. Hopefuls with a Ticket to the Big Show.While last year's driver search was open to anyone with money to pay for the entry fee, this year's selection was based on U.S. grassroots hopefuls. An unexpected last minute driver search came down to six hopefuls getting a call to show their stuff in front of the judges on the Friday before the event. Included in the search was Alex Phiffer, Segio Yamamoto, Andy Yen, Chris Forsberg, Ben Swartz and Benson Hsu. With the last minute call only a few were prepared for the challenge, while some drivers borrowed cars from friends as an entry. Benson Hsu jumped in one of our cover cars owned by Richard Tang. Ben Swartz had help from Ken Miyoshi to build a drift ready S13.

Unfortunately, before the driver search both Benson and Chris experienced car problems, eliminating them from the competition. Thursday night before the search began Benson plowed into the plastic barricades on a practice session and scrambled that night to fix a busted radiator but was unable to finish in time. Ben also met the K rail that took many vehicles out of the competition but was still able to compete. Due to his vehicle being unable to produce enough power in time for the event, Ben and the Myoshi Motorsports team had to give it their best with what they were dealt. In the end, out of the six hopefuls three would move on to the next round. This included Alex Phiffer, Andy Yen and Segio Yamamoto.

Tuesday's Tire Test
Japan and U.S. Drivers Shakedown for D1While the big day was to come on Saturday, this did not stop Companies like Tanabe, Signal, A'PEXi and Motorex from joining together to rent Irwindale for a last minute test session. Invited to the session were a few of the U.S. D1 drivers as well as a few drivers getting ready to qualify for D1. This group consisted of Andy Yen of Autolink, Alex Phiffer from Battle Version, and Chris Forsberg, supported by Tanabe.

Among this group it's easy to say that Alex Phiffer is the most experienced when it comes to drifting in the States. Raised in Hawaii, this guy has been drifting for over eight years and now that it has gone mainstream, it's time for him to shine. Chris Forsberg was raised in the East Coast but has since moved to the West Coast to continue his drifting career. For this particular test and tune, Chris had just finished adding the last pieces of his SR20-powered 350Z the morning of this track day. Andy Yen has been sponsored by Autolink for quite sometime now and his experience is worthy of D1. Often spotted drifting a busted-up Corolla, he now sports an S13 Nissan with a SR20DET engine. While his Corolla is driftable, this drift-ready Nissan will showcase his competitive skills.

Also on the tire test mission were the following Japanese companies: A'PEXi, Tanabe, Signal Auto, Motorex and DRFT. Although each of these companies have different tire sponsors, it was nice to see they could all get together to share the track. A'PEXi tested their new Bridgestone tires while Tanabe and Signal shook down different model BFG rubbers. Motorex ran Falkens on their 350Z, piloted by Calvin Wan, while DRFT used Yokohamas.

Import Tuner
Sick Nissan Silvias, Sunnys, & Others Set Upon 22nd Annual NISMO FESTIVAL at Fuji Speedway
For more than 2 decades the NISMO Festival has served as a gathering of Nissans that run the gamut from collector pieces to high-end, motorsport warriors and for 2019 the focus was on the 50th anniversary of the GT-R and Z-car
Rodrez – Feb 13, 2020

Import Tuner
Drifting In A Rotary-Powered Nissan Sedan, Drag Racing In A V8 Civic and SR20 Dune Buggy!
Few events manage to pack in as much excitement and sensory overload as the UnderUp event in Thailand.
Rodrez – Feb 12, 2020