Millen and the Goat Take It All 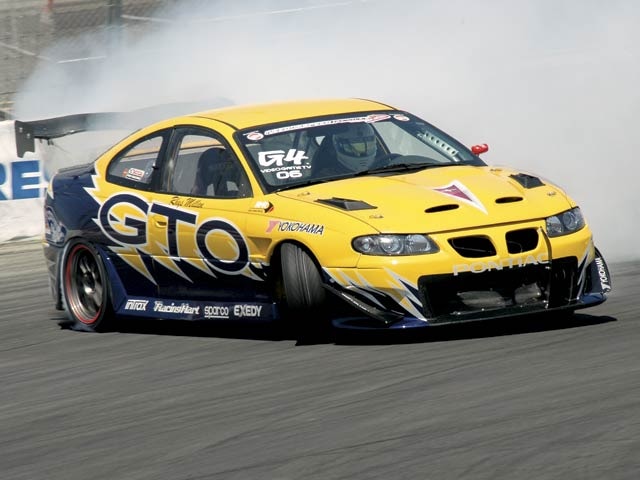 From the way Rhys Millen had been sliding all season, we should have seen it coming. An impressive second place finish at the Formula Drift finale meant that Millen shut the final door on a hard fought season to become the winner of the 2005 Need For Speed Formula Drift Championship.

Previously home to numerous drifting events, Irwindale Speedway, which resides in the industrious heart of Southern California, has become familiar ground for many sideways sliders and fans. Those naysayers who have proclaimed drifting dead or dying were caught eating their words at the Formula Drift season clincher. Thousands of spectators, many of them camped out for hours, came out to the track to enjoy a full day of sights, smells and sounds. 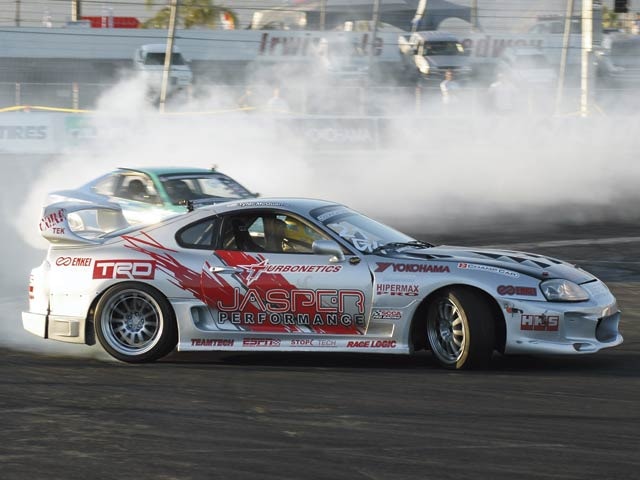 Although a familiar venue, the track layout within Irwindale Speedway is always laid out differently; an excellent move to keep drivers on their toes. A devil's track laid out on burning hot asphalt and covered with unforgiving retaining walls, the speedway held destruction for many entrants. Enjuku Racing's Rob Fleming crashed hard in his Kumho Tires-sponsored S13 on Friday. The next day, Taka Aono vaulted his Falken Tires/Club 4AG AE86 into the air and on to its roof. RS*R's Alex Pfeiffer also went hard into the retaining wall with his S2000 drifter, ending his weekend early. 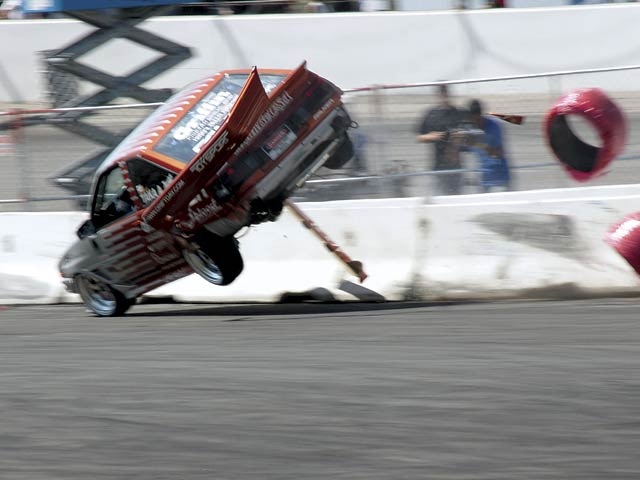 The points leader going into the final round, Millen faced fierce competition for the crown from Samuel Hubinette, Ken Gushi, Daijiro Yoshihara, and Vaughn Gittin, Jr., all of whom had a mathematical chance of becoming series champion. Yoshihara and the shimmering Pacific Rim S13 found themselves sitting on the sidelines after an early round elimination by Mike Peters and the Bubba Drift Hell Camino. Gushi in the Toyo Tires Mustang also found his championship hopes cut down after a Top 16 loss with Hubinette's Mopar beast. Hubinette, the previous Formula D series champion, lost it all in the Great 8 round facing Gittin, leaving only Millen and Gittin gunning for the season. It all came crashing down for Gittin in the Final Four round, as elimination from teammate Chris Forsberg's Falken Tires S15 meant the year belonged to Millen. Seeking to take the win and the championship, Millen drifted his heart out against Forsberg, but the Falken drifter's mind was all business. Forsberg's win put another import car on the top pedestal, and Millen's second place put his name down in Formula Drift history. With the season wrapped up, the drifting finally done, and everybody's mind turning towards 2006, what lays in store for Formula D next? www.formulad.com

Millen and the Goat Take It All
Photo /

By Photos by Xerotalent
2 Articles

Import Tuner
Sick Nissan Silvias, Sunnys, & Others Set Upon 22nd Annual NISMO FESTIVAL at Fuji Speedway
For more than 2 decades the NISMO Festival has served as a gathering of Nissans that run the gamut from collector pieces to high-end, motorsport warriors and for 2019 the focus was on the 50th anniversary of the GT-R and Z-car
Rodrez – Feb 13, 2020

Import Tuner
Drifting In A Rotary-Powered Nissan Sedan, Drag Racing In A V8 Civic and SR20 Dune Buggy!
Few events manage to pack in as much excitement and sensory overload as the UnderUp event in Thailand.
Rodrez – Feb 12, 2020