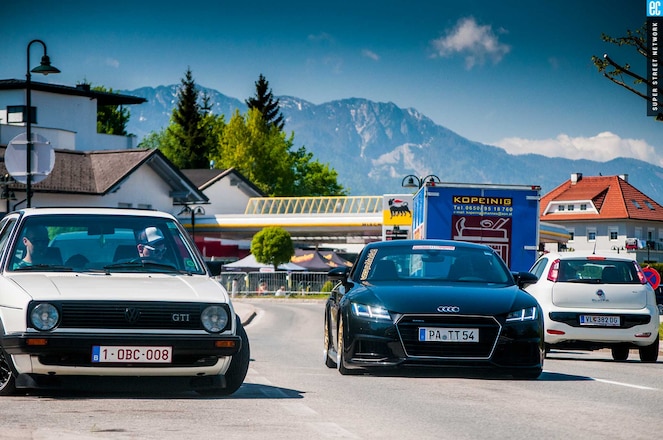 One thing needs to be made clear at the beginning: there are VAG gatherings, and then there's the Wörthersee. This is not because of the ludicrously picturesque landshaft surrounding the lake hidden among the Austrian Alps that hosts the event. This is not even due to the world-class league projects that come here each year but are rarely to be seen anywhere else. The thing that blows the minds of people coming here and makes them want to come back every year is just the impossible size of the whole event. Once a modest, spontaneous weekend party for a bunch of Golf GTI enthusiasts, over the last thirty years, it has grown to be a giant festival cherishing beefed up VWs and slammed down Audis, speed, burnouts, beer, loud music, and some more beer. It would be an awful cliche to call the GTI Treffen (as the Wörthersee gathering is officially known) the mecca of VAG fans, but similarities are too hard not to be brought up. In both cases, the followers can't say they know their thing without being there at least once, so thousands of them gather once a year to go around their holy place for these cult reasons. The VAG people even have a literal granite touchstone — fittingly, in the shape of an early Golf.

It is estimated that this tranquil region inhabited by a few thousand people is flooded with more than 150,000 enthusiasts coming from all over Europe (along with one Golf on Japanese plates), but this year that number seemed to be greatly surpassed. For many miles around the lake, the only thing to be seen were the crowds hanging out, sitting in rows of deck chairs along the roads, sipping their favorite beverages while looking at the VAG all-time-greatest collection of thousands of cars, which their owners had been meticulously modifying and perfecting for the last twelve months for this very occasion. The cars also take part in cruising around the lake, forming one of a kind exhibition, where the exhibits keep on flowing from one place to another along with the spectators. A good grasp of the local spots is invaluable, but if you do your homework before coming to Austria, you should be familiar with the main attractions in the town of Reifnitz, customs at the 'Turbokurve' and the famous Eni gas station. As the cars keep on moving through the days, there's no fixed winning strategy for getting most of your stay — the best things may await further away in the hills, a parking lot at a local supermarket or in someone's front lawn. 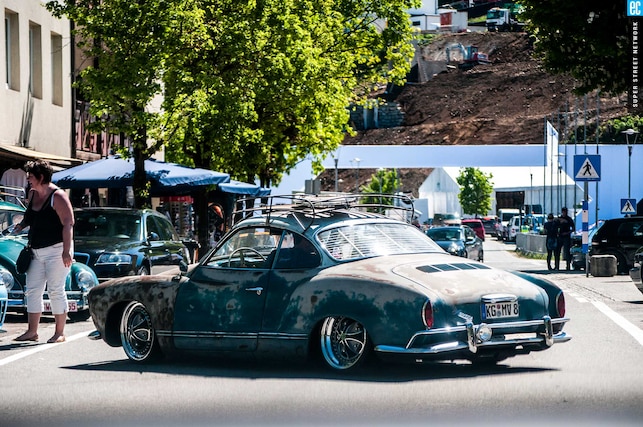 As the old German saying goes, the closer the official date of the event, the fewer good cars appear and the more drunk guys dancing to the techno take their place. Even if, in theory, the Treffen (German for 'meeting') lasts four days at the beginning of May, dedicated fans arrive two, or even three weeks earlier, often coming back home before the show officially starts. Having attended the main event in the previous years, this time we chose the insiders' way and arrived around a week before the start of this automotive equivalent of Mardi Gras with the roads filled with hundreds of vendors with all kind of tuner must-haves, amusement parks, concerts, dancers, and the official stands of VW, Audi, Seat and Skoda. The VAG's Big Four each year premiere their wild concepts prepared especially for that meeting, forming an emotional bond with thousands of blokes who have done the same thing with their Golfs or A6s. There are few other shows where the car freaks and the biggest carmakers in the world would play on such equal rules.

The atmosphere may remind you of a laidback pool party, but the cars are treated very seriously here. Sometimes you wonder how the hell some people managed to get cars like the brand new Audi TTs and then had the time, money (and guts) to cut it into pieces and rebuild it in a typically German style. A Cayman GT4, Gallardo or Ferrari is not treated here as such a royalty as the numerous R8s armed with crazy body mods and superchargers. Still, a heavily modified Volkswagen Caddy or an old T1 can gather just as much street cred here as a supercar. The "money no object" attitude applies not only to the rarest cars; a Golf with Lamborghini brakes or 20" Bentley rims worth more than the rest of the car is a typical example of the German sense of humor. This year, one MK7 Golf took the competition to the next level, featuring a complete body made of bare carbon fiber all the way down to the red carbon brake calipers. On the other end, there was a B6 Audi S4 Cabrio with the body covered in the very same cognac leather upholstery as the interior, with all the diamond quilting and stitching faithfully recreated on the doors, hood and the rest of the body. Not so spectacular but still worth noting was a MK4 Golf with a 16-valve engine and Webber rims taken from MK2 Golf. Are we witnessing the beginning of a new trend here? It wouldn't be the first time one was born here. 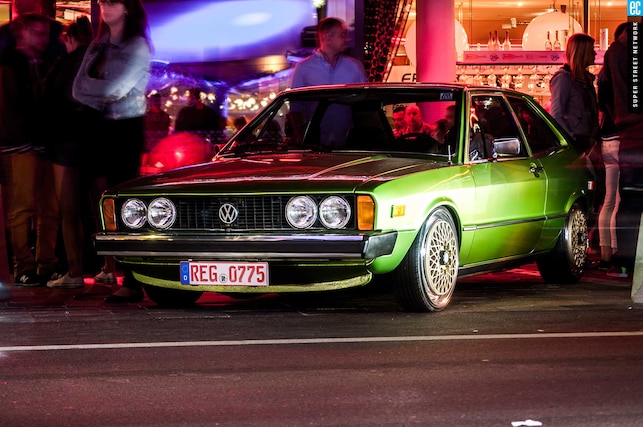 One of the hottest trends this year seemed to be retro racers, the highlight of which was two early Golfs with Kamei-style body kits and a sweet track-ready Audi 80. Along with some resto-modded excellence, they formed a wide offensive of vintage cars that arrived at the lake in unprecedented numbers. Beetles, T2s and 80's Porsches filled a surprisingly big part of the grid. Even more surprisingly, many of them didn't bear any kinds of modifications. Those lucky enough to walk the roads in the area saw what seemed to be about a half of the total Golf Rallye production. The same applied to its modern counterpart, the just as rare and appealingly fast Polo Rs, another strong candidate for a future hot-hatch classic. As the main VW feast was still a few days ahead, some drivers dared to bring here their BMWs, Subarus or AMGs. There's no place for cars other than VAG products during the official days, though — appearing in one would be like wearing a Real Madrid jersey at an FC Barcelona sector of Camp Nou. Ask the poor women who took the wrong turn and accidentally arrived here in a Fiat last year... 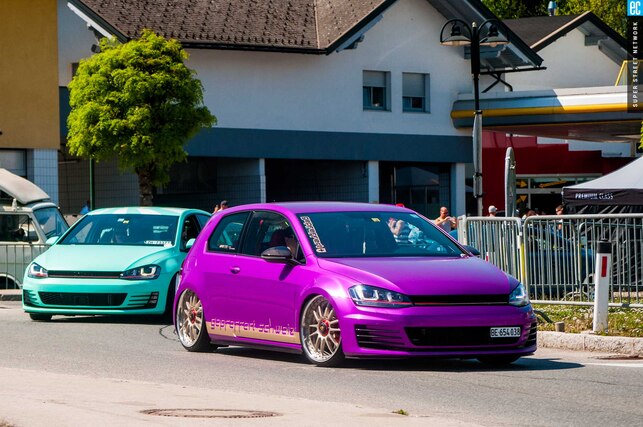 The event is very popular with the local Polizei too, but for entirely different reasons. They show little understanding for the urgent need of burning the tires or racing on local roads, so the real fun starts here only after midnight. Be lucky and you'll see a good show with a quality soundtrack composed by blow off valves, loud exhausts and turbocharged VR6s revved like there was no tomorrow. Be unlucky and you'll get caught by the guys on white motorcycles with blue lights flashing and be prepared to lose lots of euros.

No matter whether you like risking it or not, even without the underground bit, the Wörthersee is a place that recalibrates the idea of a car gathering. It's hard not to be impressed here with everything from the world leading projects to the '80s Golfs, and all the sheer madness that surrounds the cars. Quite possibly it's the biggest — and the greatest — car show on our planet. 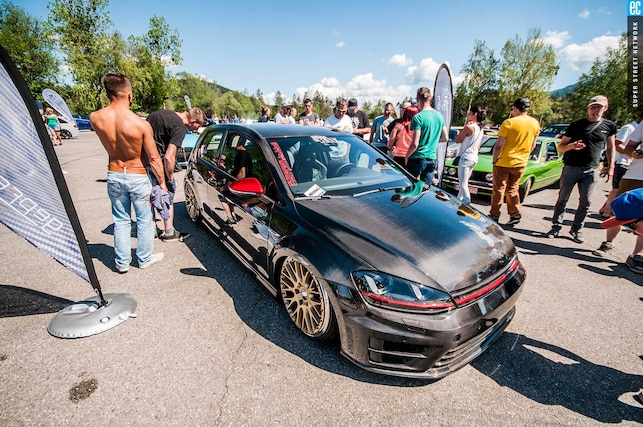 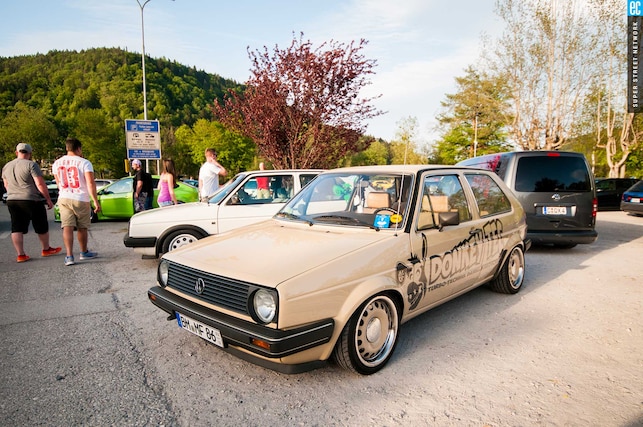 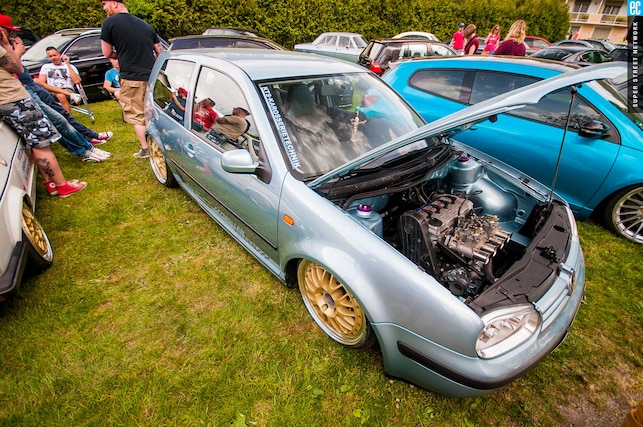 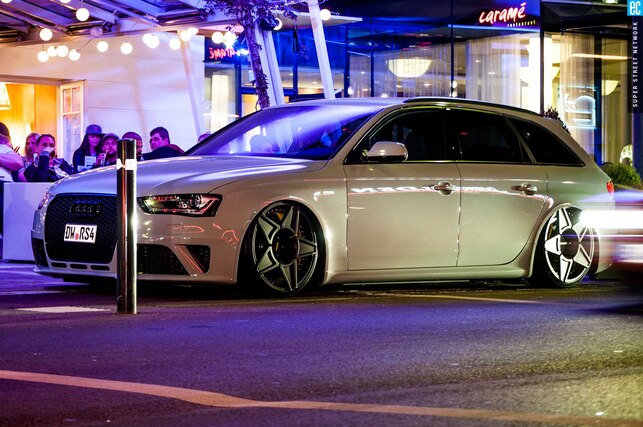 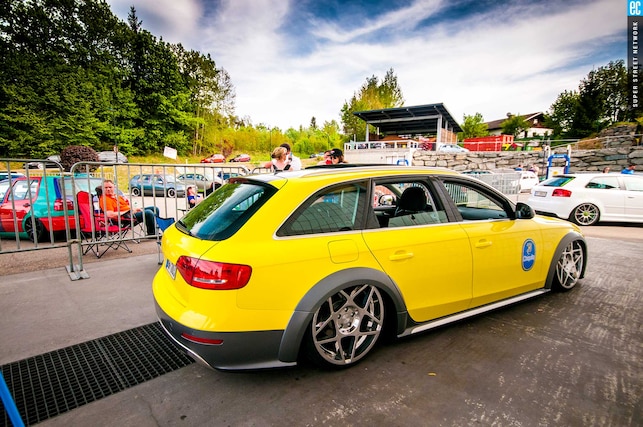 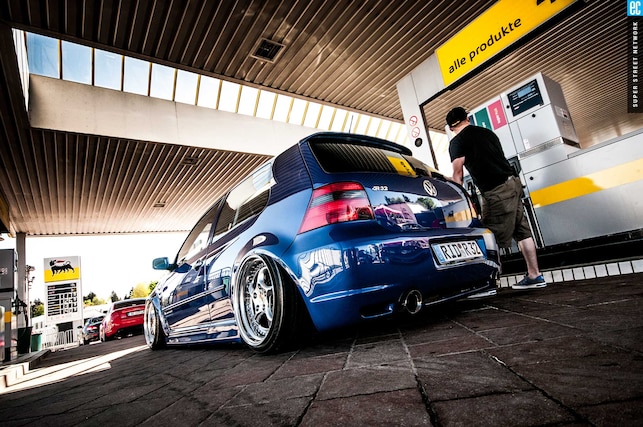