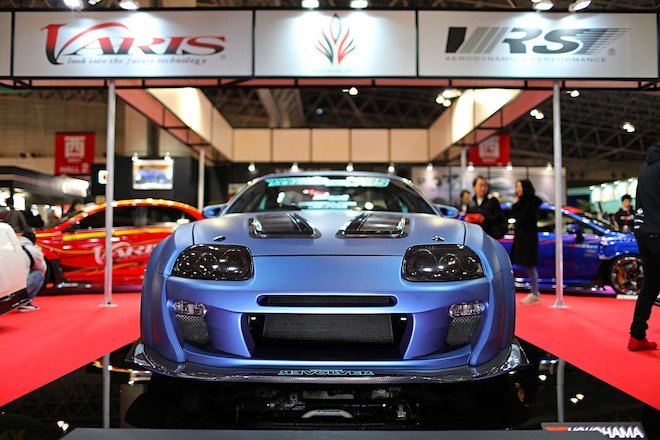 Tokyo Auto Salon is the mecca of all sport compact events and on the bucket list for virtually any hardcore enthusiast. Even your author has been wanting to attend TAS for over 20 years, and finally made the pilgrimage (thanks Bob and Rodrez!) to the motherland to bring you Super Street's 2018 coverage. Housed across 11 halls and outside exhibitions, the Makuhari Messe convention center is home to a blend of modified personal cars and manufacturer displays. Though, in comparison for those that have been, TAS is only around one third the size of SEMA. Of course with TAS, you're not running into nearly as many of the random booths that leave you scratching your head, like in Vegas.

It would appear that every new Honda NSX that was intended for the Japanese market is on display at TAS. Offered in a variety of variants, we counted over a dozen so far, in which a large selection has been converted to GT racecar spec — and that makes us very happy. A blend of classic and new, race to VIP, the Tokyo Auto Salon has something for everybody.

Day one of the show featured three special events: a hooning exhibition by Ken Block in his Ford Fiesta rally car, drifting by D1 Grand Prix drivers, and also a classic car auction by BH Auction. The highlight of the auction was a 1990 Nissan R90CK, a Nissan factory-built racecar designed to compete in the World Sportscar Championship. The non-reserve auction was estimated to bring in between 148,000,000 and 198,000,000 yen, or $1.3-1.8 million dollars! Other notables included a 1970 Toyota 2000GT, low mileage R34 Skyline GT-R, and a pair of barn find 240Zs that still carried the dust from decades ago. Here's a look at some of our favorite finds from the show ... so far: 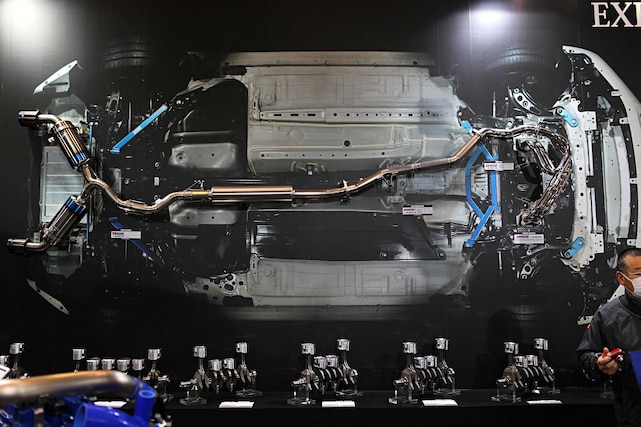 Tomei put together a clever display that featured a hi-res, detailed print out of the belly of an 86 with actual product attached to it that fit to scale perfectly. "Bolt-ons" included their Ti Racing exhaust system, Expreme Ti straight pipe and exhaust manifold. 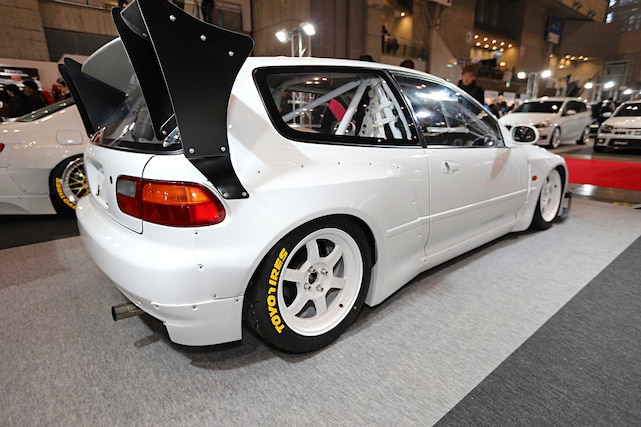 People following the show on social media seem to be losing their minds over this Pandem EG chassis Civic armed with their widebody kit, massive rear wing and Lexan side windows. The TE37s seemed to be a bit tame in comparison to the oversized fenders at all four corners. 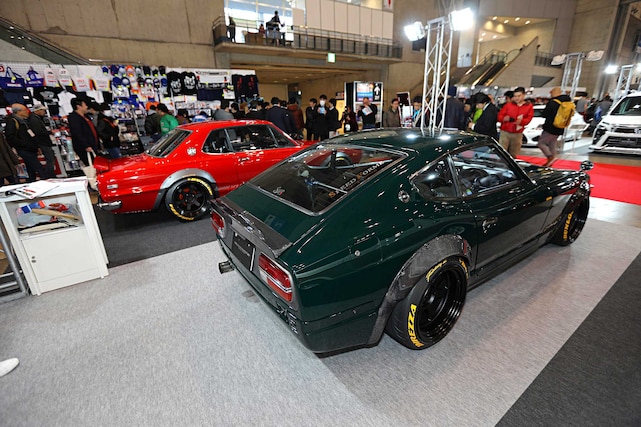 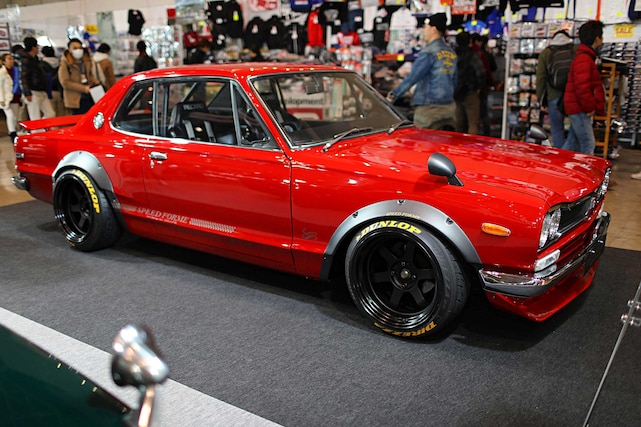 This duo from Speed Forme caught plenty of attention. Pristine paint, a perfect stance and carbon fiber touches put this Z-car on another level. The attention to detail and overall clean, classic look carried over to this vintage Skyline as well. 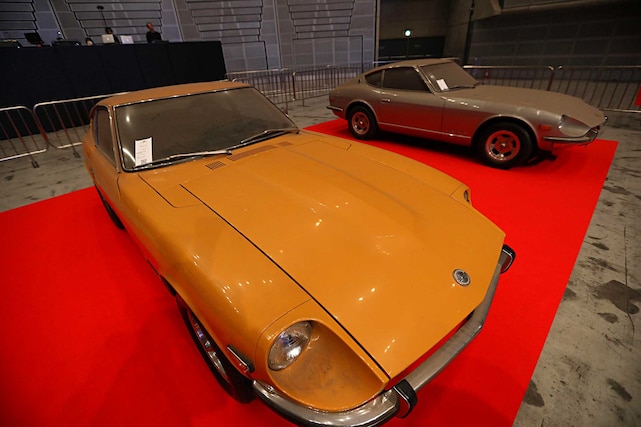 BH Auction brought out some classics to offer to the highest bidder, which included this pair of barn finds that literally haven't been touched. The mustard-colored '66 240Z is calling our name ... 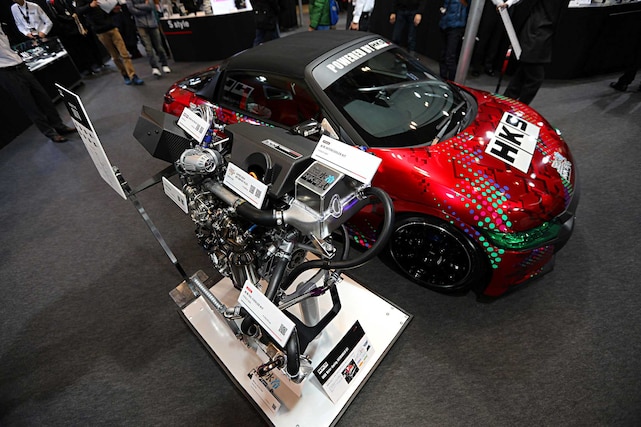 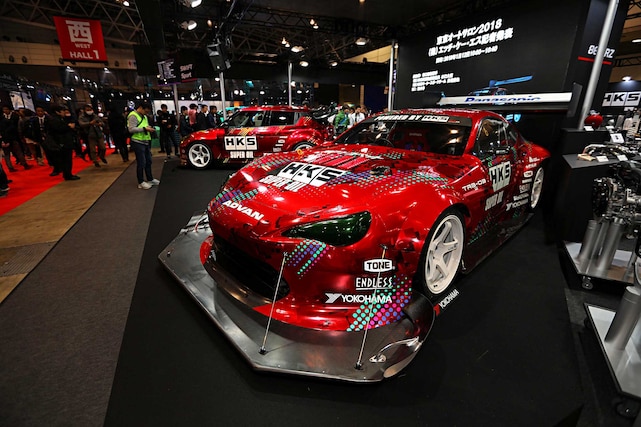 The popularity of Honda's S660 continues to fester and HKS was on hand to show off their complete line of performance upgrades for the micro-machine. Right next to the Honda sat this rather aggressive 86 on Advan GT rollers stuffed under the extended fenders that look right at home with the rear wing that towers over the roofline. 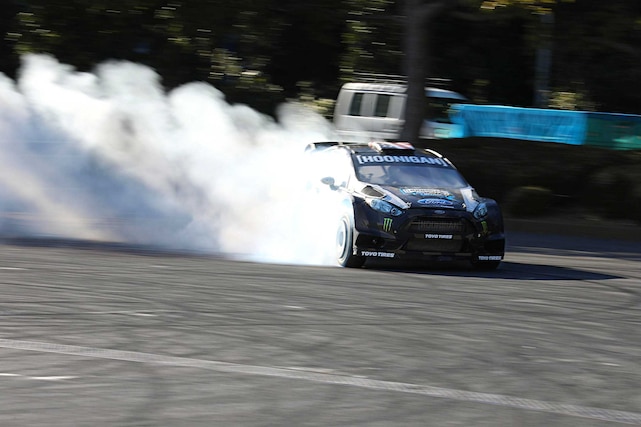 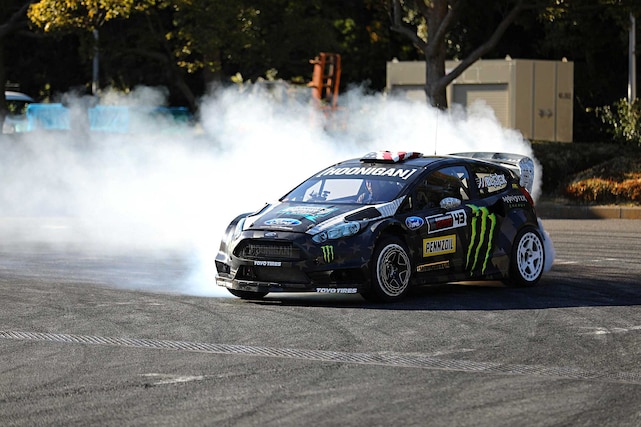 Ken Block in his nasty AWD Fiesta laying down a smoke show for the Japanese audience. 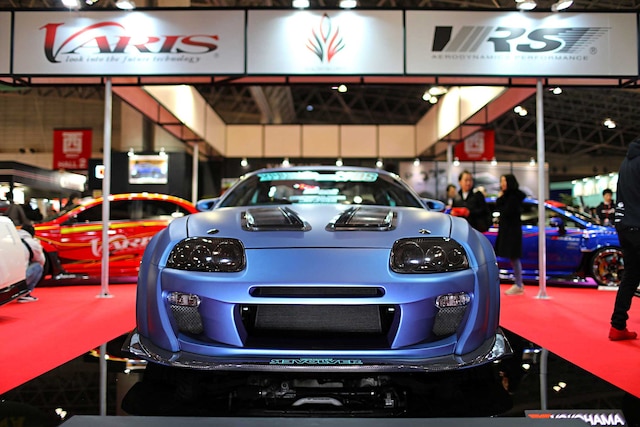 Garage Revolver's matte blue Supra with the evil stare down was one of our favorites of the day.