Two of Japan's heavy hitters have a lot in the works! 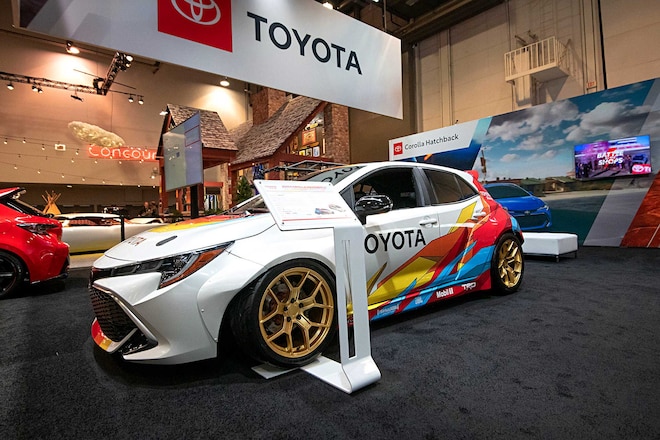 The 2010s seem to be the decade of the reboot. Not only in the seemingly endless list of silver-screen comic book adaptations, prequel and sequels of yesterday's most popular film and TV franchises, and the odd pop-music reunion (should we be a fan or afraid of the Spice Girls' return?) But right here at home in the automotive world, for as much as we yearned for the return of the Hachi Roku, for as elusive as the new NSX seemed even to those who could afford one, and for how many diehard turbo/AWD heads switched their import alliances to the Ford Focus RS, there might not be a single car all of us have looked forward to more than the new Toyota Supra. 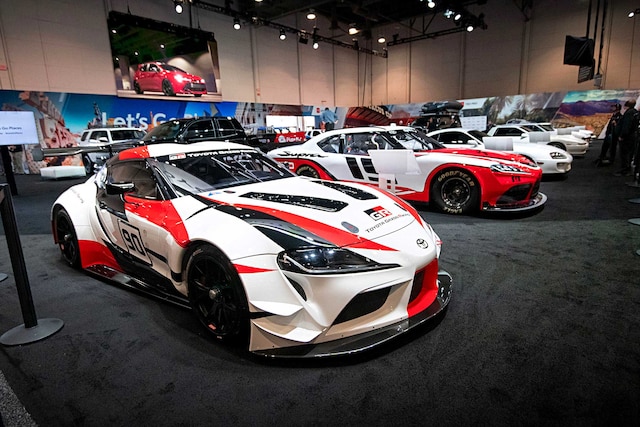 And so it makes sense that Toyota would lead its official presence at the SEMA show with their plans for one of the automotive world's most hallowed reboots, embodied in two high-performance takes on the all-new Japanese supercar, appearing amidst a setting of nearly a dozen vintage Supras spanning the generations. 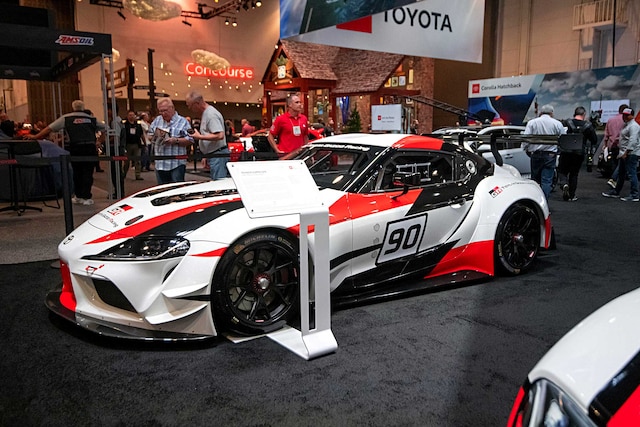 First, the far and away show stealer: the GR Supra Racing Concept. Designed in partnership with Toyota Gazoo Racing, this seemingly production-capable concept looks like it could be adapted for GT4 or even GT3 duty almost immediately, to compete in races like the 24 Hours of Le Mans or Nurburgring, or in domestic series like IMSA. That's a lot of "maybes," but we expect race versions to hit circuits somewhere in 2019, and the eventual road-going version of the all-new 2020 car (to be announced at the 2019 North American Int'l Auto Show in Detroit, in January) to look very similar, albeit with more conservative dimensions. 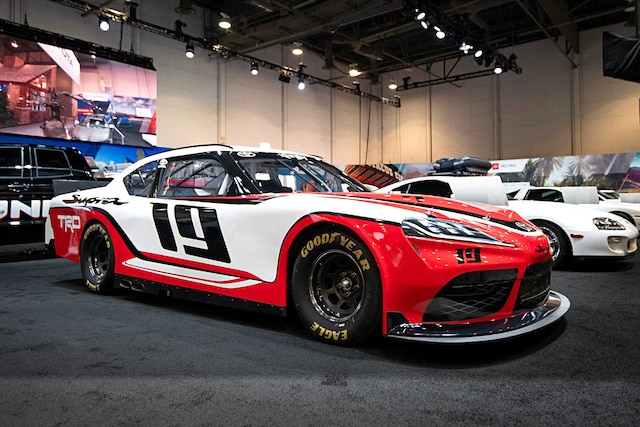 Seated next to the GR Supra Racing Concept was one new car guaranteed to see racing duty here at home: the NASCAR Xfinity Series Toyota Supra. Set to make its competition debut at the Daytona 500 on February 16th, 2019, where it will replace the venerable Camry of the series, and duke it out amongst a field of domestics for ultimate bragging rights in contemporary stock car racing. Behind the wheel? Twenty-three-year-old Christopher Bell, who helped introduce the car to attendees of Toyota's SEMA press conference. 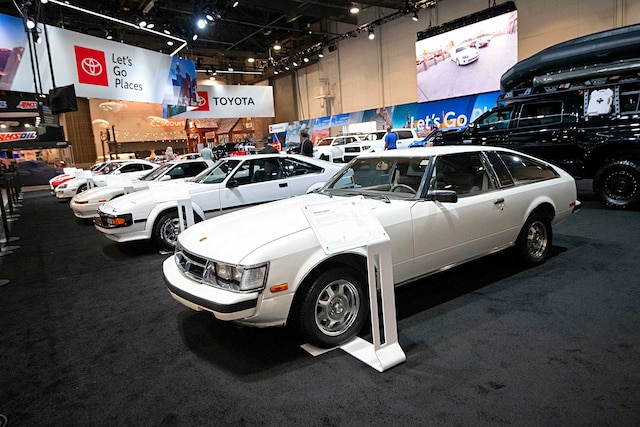 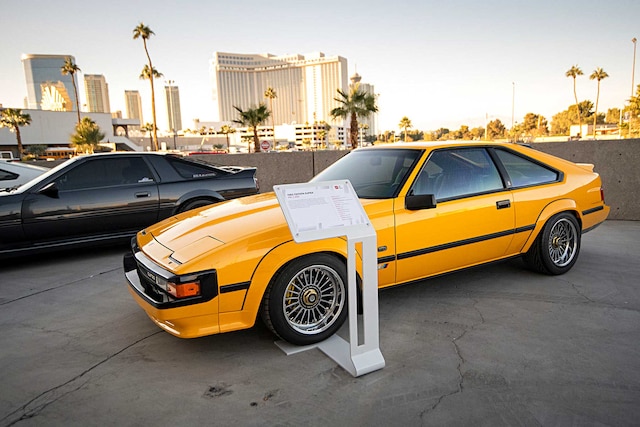 Flanking the two new Supra race car was a factory-stock evolution of the Supra from the 1978 Celica Supra through the crowd-favorite MkIV JZA80 chassis that ceased production in 2002. Outside, a pack of modified versions of the vaunted Toyota could be found.

Though the GT86 evolved Corolla DNA into its own model, the world's most popular car still enjoys potent performance and tuning potential all its own. Anchoring another highly visible corner of the Toyota display were the five 2019 Toyota "Battle of the Shops" Corollas given to prominent tuners to explore the depths of its tuning potential. First up: the matte gray Corolla of Alex Molina and Muscle Tuner Automotive, and the nitrous-enhanced creation of domestic and 4x4 tuner Julio Ixta and SoCal Kustomz. 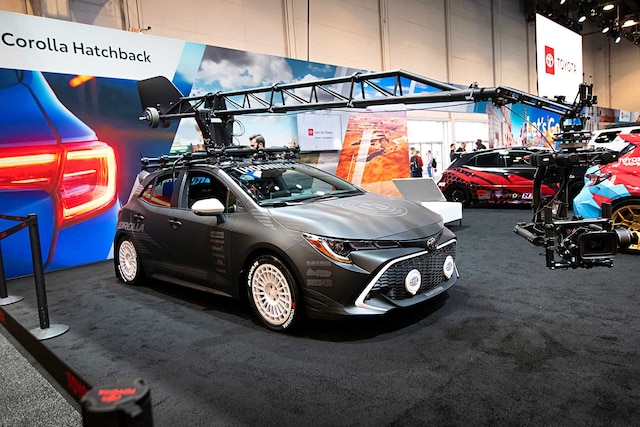 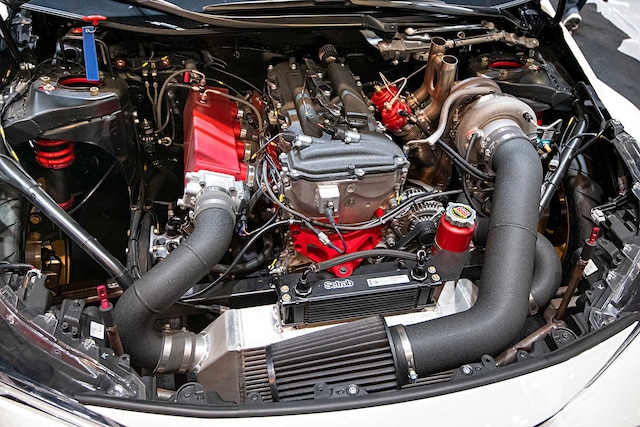 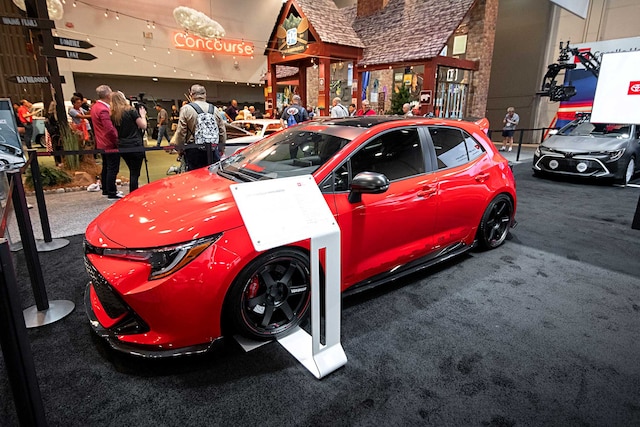 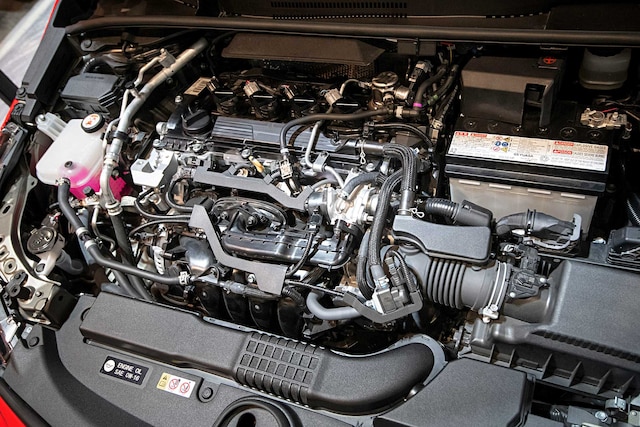 But our favorite was, of course, our car, the ultra-clean Super Street Corolla which was designed in conjunction with Young Tea and Auto Tuned to do everything a Corolla does best: roam the streets looking good, with great flexibility and complete reliability, while still packing an unassuming performance punch. 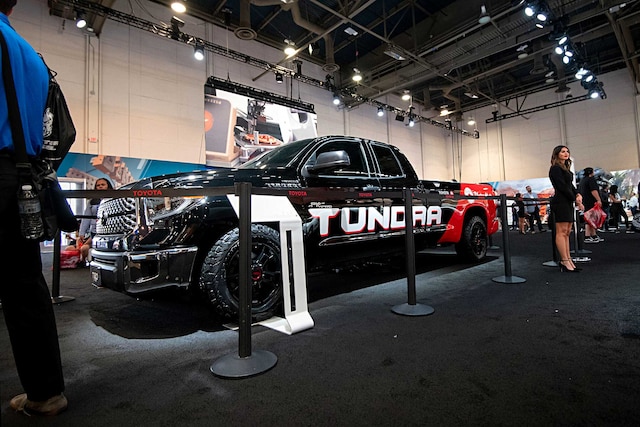 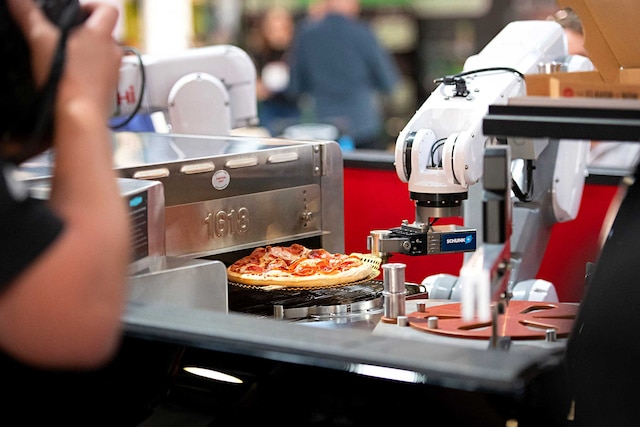 This is also a big year for Toyota trucks, and to celebrate, Toyota brought an equal onslaught of them as the Supra, highlighted by the Toyota Tundra Pie Pro. WTH is that, you ask? Well, what might seem like a frivolous car-show stunt was actually a fun, relevant display of some Toyota particulars in the modern day. The brand's recent move to Plano, Texas brings it in close proximity to Pizza Hut's headquarters, and this brand-new Toyota Tacoma employs the use of specially programmed Nachi robots (similar to ones manning Toyota's U.S. assembly lines) to prepare, cook, cut, box, and serve Pizza Hut pizza, all from the bed of the truck. Best of all, hydrogen fuel-cell technology powers the truck and generates electricity for the pizza-making operation, meaning the only emissions in the whole system are water vapor, pizza, and some lighthearted fun. 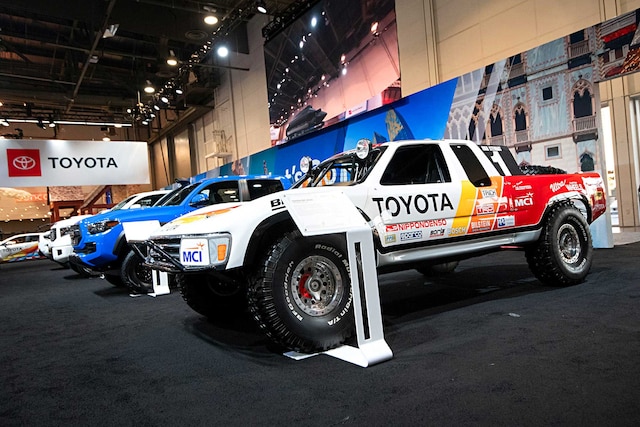 But probably our favorite Toyota truck of the display was Ivan "Ironman" Stewart's 1997 Tacoma trophy truck, complete with its 580-hp, 8,400-rpm Toyota V8 engine and innovative-by-today's-standards chassis and drivetrain fabrication. Forming the start of a line of today's Toyota trucks, its small frame and nimble build captured the hearts of Toyota's most diehard sport-compact tuners. And the authentic Ivan Stewart arcade game behind it only added to the allure. 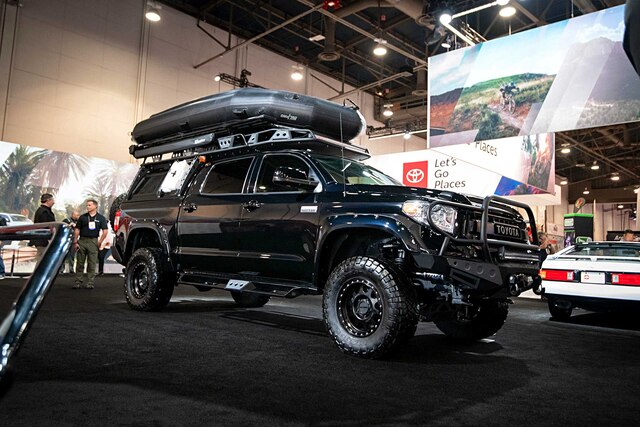 Lastly, claiming the largest footprint of any single vehicle in attendance was Kevin Costner's "Ultimate Adventure Truck," a towering Toyota Tundra modified in all the right ways to enjoy the great outdoors in just about any fashion. Lifted on 35-inch Nitto Ridge Grapplers, complete with necessities like a white-water raft, a winch, fold-out shades, and heavy-gauge steel bumpers, and accents (and scars that prove Costner and family use it!) there's just about nowhere this behemoth can't go—or seemingly hasn't been. 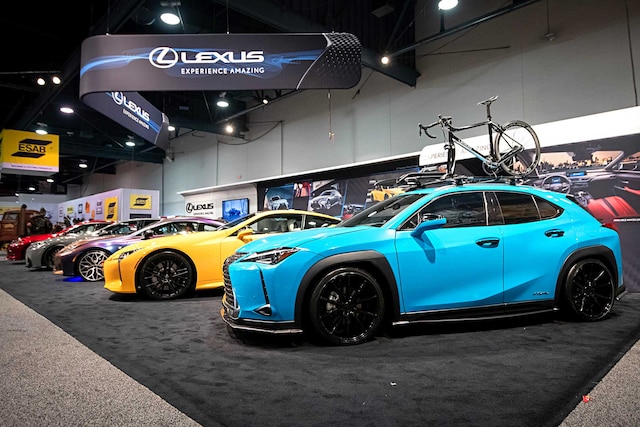 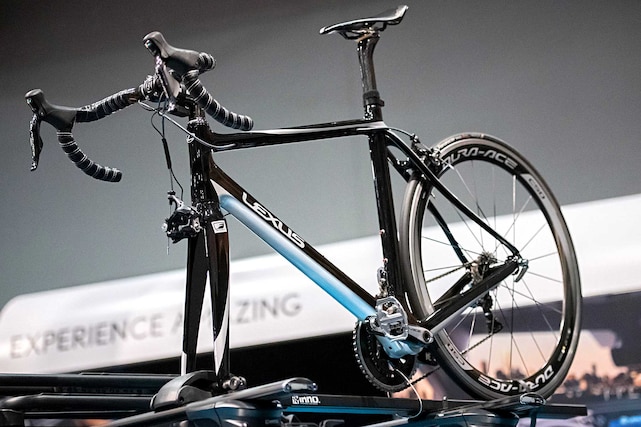 By comparison, the Lexus booth at this year's show was much smaller, but still packed some clever punches for enthusiasts. Heading off show goers entering the South Hall was a bright blue custom 2019 UX 250h, one of Lexus' newest vehicles and this one modified with an ABS lip kit, Vossen VFS-1 wheels and Nitto rubber, an Apex'i N1 EXV suspension and N1-X catback exhaust, and an Inno Base Rack system for an equally custom Lexus road bike.

Also in the "bright" and "attention commanding" side of things was the 2019 Lexus LC 500 Inspiration Series concept. With a 471-hp 5.0L Lexus V8 underhood and capable of 4.4-sec 0-60 mph blasts, it's probably the Lexus we most wanted to drive (aside from Ekanoo Racing's monster drag RC ... but more on that in a future article). Its Flare Yellow paint and 21-inch alloys certainly set it apart from the pack, but we just can't wait to start seeing more custom LCs hit the road in any form. Such a cool car.

Elsewhere were a brand spankin' new 2019 RC 350 F Sport built by collaborators across the country and wrapped in chameleon hues, a 2019 ES 350 F Sport built to appeal to a more mature audience, and a daily driveable matte grey 2018 LS F Sport, all with an assortment of performance and style bits from Vossen, Work, RAYS Engineering, Apex'i, Artisan Spirit aero, Brembo, and Avery vinyl wrap.