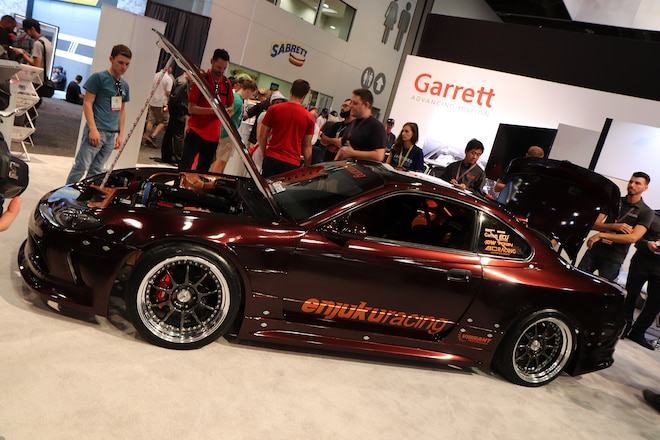 We’ll bet 5 bucks you knew who Adam LZ was before you knew that Garrett Turbochargers (or Turbo By Garrett – we’re not entirely sure how the naming conventions went) was now Garrett Advancing Motion. Maybe that’s the whole point of backing the proto-celebrity, you get access to his millions of fans, but whatever the nexus for the collaboration it resulted in Mr. Lizotte-Zeisler teaming up with both the respected forced induction outfit and Enjuku Racing, builders of pro drift Nissan S chassis over the years, to make the hot little Silvia you see here – revealed at the SEMA Show Tuesday afternoon in Garrett’s booth.

The foundation is a 1999 Nissan S15 Silvia Spec-R (as opposed to the Spec-S; neither was sold in North America), and believe it or not this puppy has been built to handle Formula DRIFT competition. Enjuku stitch welded the chassis and then braced it up with a custom TIG-welded roll cage, also tubing up the front and rear of the car with bash bars. LZ sourced a Vertex Edge widebody kit (that’s front and rear bumpers and a pair each of side skirts, front fenders, and rear fenders) and the S15 is finished in a Black Rose vinyl wrap. 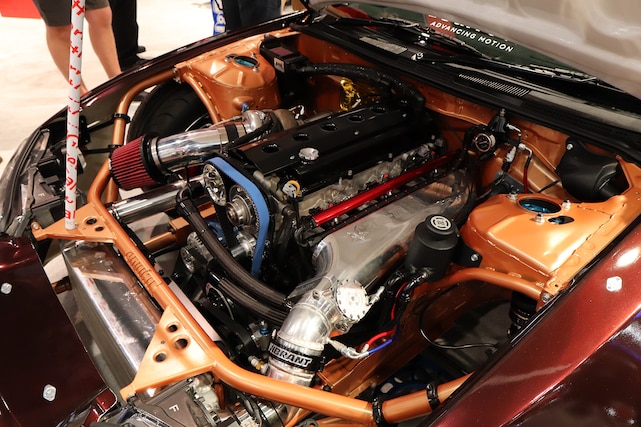 Your eyes do not deceive you – that’s a Toyota 2JZ-GTE in this Nissan’s engine bay, but it’s no ordinary turbo inline-6; with a Brian Crower stroker kit, the mill now displaces 3.4 liters. Charged air travels past an RMR throttle body into a Sleeper Designs billet intake manifold, while on the hot side of the engine a DOCRace turbo manifold sends gases through a Garrett GTX3584RS turbo. The S15 is also outfitted with a custom ER Spec 4-inch oval exhaust from the turbo back. Pumping E85 to the engine are two Deatschwerks DW300 fuel pumps along with Deatschwerks 1200cc injectors. The engine is managed by an ECUMASTER EMU Black and tuned by RS-Enthalpy in Tampa, Fla and makes 915 horsepower and 835 lb-ft. of torque at the wheels.

Engine power is routed through a Samsonas 6-speed sequential gearbox mated to a Winters Performance quick-change rear end. Keeping the S15 planted to the ground is a set of BC Racing BR Series 2-Way Coilovers, paired with Wisefab Front Lock and Rear Suspension Kits for that mad steering angle. The car is finished with a set of 18-inch SSR SP3’s with a width of 9.5 inches in front and 10.5 in the rear.

See more about the car and Adam LZ’s life at his YouTube channel.