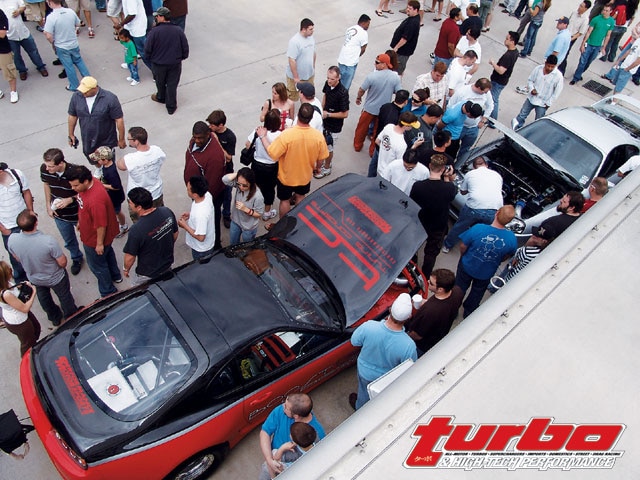 Every year I make the trip to the annual TX2K7, the Texas National Supra Meet, and no matter how much Peter Blach and Dusty Womack (the event's organizer and primary sponsor, respectively) tried to convince me to drive my Supra to the event, I took the easy route once again and flew out to Houston. I guess I'm just not hardcore enough to make the 16-plus hour trek from SoCal to Texas. As the plane touched down, I was greeted by some real Midwest weather. Thunder, lightning and pouring rain made for a fun drive to the hotel. It didn't hurt that I was able to find a 306hp rear-wheel-drive rental car.

Thursday morning's weather was clear and cool, so other than a little mud waiting off track at MotorSport Ranch in Houston, it was a perfect day for road racing. The paddocks were full of Supras from mild to wild ready to mix it up with Vipers, Vettes, M-Cars, F-Cars and P-Cars. The "insurance-friendly" driver's education event (keeping in vogue with current trends) ended the day with a Time Attack where Leh Keen in the GSC Motorsports Supra was able to eek out a several second lead on Ryan Schimsk in the Boost Logic C5 Z06 to take the win.

Friday brought us back to Racing Solutions Inc. for the dyno day. Early on it seemed like a Viper might once again steal the glory, but Bob Helm's 1,376rwhp '00 Viper GTS would have some competition this year. Thanks to the fact that (according to Womack) there are now at least seven stroker kits available for the 2JZ on MVP's website - a little extra displacement would help tilt the odds this year. Kean Wang and Chris Johnson chose to save the new Boost Logic drag Supra for race day and throw Johnson's "street car" into the ring, laying down 1,441 to the wheels with this year's fashionable GT55-91 turbo cramming 40+psi into a 3.4 liter from their in-house engine program. Kareem Omar, who showed the most enthusiasm of anyone all day when he put down 1,051 with his clean street Supra, took second place in the MKIV class. Taking home trophies in the MKI to MKIII class were Denny Bowser with 440 hp, closely followed by Howard Nguyen with 436 hp at the wheels - both relied on the 7M to deliver power. Around 8 p.m., the trophies were finally handed out after 29 cars were strapped down and the rollers devoured 19,319 horsepower.

On this 8th year of the Texas meet (sorry for the misinformation last year) we no longer had to drive over two hours to the San Antonio Raceway. Instead, we made a quick 45-minute drive to the newly completed LoneStar MotorSports Park, which served well for the multitude of events on Saturday. The completely packed day started with the Show 'n' Shine and the new 60mph to 130mph Competition and continued into the night with the Test 'n' Tune.

The car show competition was standard TX2K fare, some very nicely balanced cars with luckily few (if any) rice abuse and maybe one or two MKIV's with stock turbos. Once again the MKI to MKIII class saw Lance Peltier make the winner's list for his MKIII's engine, while Lewis Venters took trophies for his stereo as well as "Best Overall" honors. Ryan Khan, a newcomer this year, won "Best Interior" with a car that (other than the addition of polished factory MKIV wheels) looked like it just rolled off the showroom floor. Not bad for a car that ceased production nearly 20 years ago. (Does that statement make anyone else feel old?)

In the MKIV competition, it was a new group, but there were no surprises. With stealth electronics mounted all over the place and otherwise simple but effective touches Ben Phillips took "Best Interior." Womack, whose street Supra now boasts a full Ridox widebody, took "Best Stereo" with alcantara wrapping everything in his interior and a laser-cut billet Supra logo accenting his amp rack. Wes Bourne, who boasted chroming everything except for his engine block on supraforums.com before the meet, wasn't a surprise winner for "Best Engine." It didn't hurt that he'd removed or hidden everything else under the engine bay that he possibly could, which created a completely clean finish. The competition was very tough this year and any of the above three really might've took "Best Overall Car." But, with a spotless finish and a super-clean drag car motif, Bourne followed in Dana Westover's footsteps and took the top prize.

While everyone was ogling the cars in the show, many hardcore enthusiasts were mere feet away participating in the new 60mph to 130mph Competition. Nick Diep clicked off 6.6 seconds to take best in the Street Tire class, Bob Helms ran 4.8 seconds taking the Drag Radial class and Stacey Barnett won the Unlimited class with his TT Viper boasting 4.6 seconds. These numbers may sound fast, but they really don't compute unless you compare them to say a Ferrari Enzo at 7.0 seconds or a Saleen S7 at 6.1 seconds.

Sunday morning welcomed us back to LoneStar for what would be a trying day for some. Like any group of car enthusiasts at a big meet, many were thrashing away to get their projects complete. The crew at Boost Logic was no different. Starting from scratch after having sold their car in the fall, Kean and the crew didn't have the luxury of much testing. A few weeks before the event they did a spectacular wheel stand that took out the bumper and some other bodywork. Little did they know that they'd starved some bearings that resulted in the motor letting go after shutdown during Saturday's Test 'n' Tune. Not wanting to disappoint, they jumped in their trucks and headed back to Austin to "make things happen." By 6 a.m., they'd been able to "steal" the motor out of their street car and get the car back to the track.

Luckily, their hard work and dedication paid off, allowing them to take out Titan Motorsports in the finals with an 8.16 @ 174 to an 8.33 @ 183.82. With a little more testing and the addition of nitrous, I'm sure we'll see the Boost Logic car make it's way much further into the seven's than their previous car.

Thanks to the insane dedication of Blach, Womack and so many other volunteers and sponsors, the 8th annual Texas National Supra Meet, left us all feeling "ground down to power" but with smiles on our faces and hoping the time between now and next year's meet goes by as quickly as it did last year.