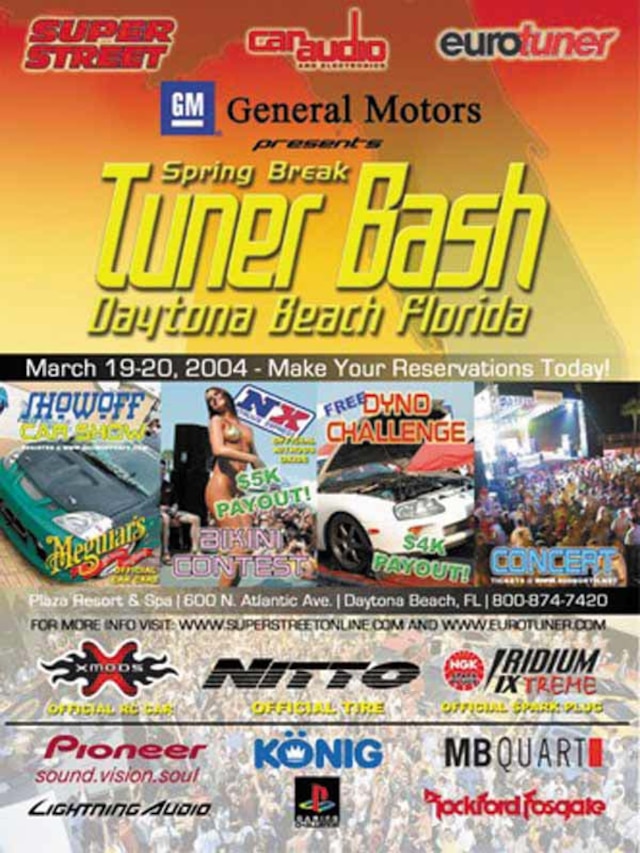 Super Street and eurotuner Magazines, announce the 4th annual "Spring Break Tuner Bash" presented by General Motors, March 19 & 20 in Daytona Beach, FL. Once again, this free event which includes a car show and interactive exhibits, will be held at The Plaza Resort & Spa (600 N. Atlantic Blvd.) home to the hottest club in Daytona Beach, 600 NORTH. Show hours are 10am to 6pm both days. Concerts, beginning at 8pm each night, are always a hit. Tens of thousands of spring break revelers from across the country will attend the Spring Break Tuner Bash merges hot cars, the latest technology, music and electronics - and of course, a good time. Due to show's enormous popularity and growth over the past three years, elements have been added again this year such as the Castrol SYNTEC Outperformers Challenge (Dyno contest), in which each class winner will receive a one years supply of Castrol Syntec motor oil. Also on site will be the latest special project vehicles from Chevrolet, Pontiac and Saturn, the Nitrous Express Bikini Contest, extensive Playstation 2 gaming exhibition and a Meguiars "Showoff" car show featuring hundreds of phenomenal show cars.

In keeping with the "A list" musical talent of the last three shows which included Paul Oakenfold, The Crystal Method, The Goo Goo Dolls and last year's concerts sponsored by Chevrolet that featured an opening set by DJ Mark Sanchez and an exclusive DJ set by Ken Jordan and Scott Kirkland of The Crystal Method, this years Tuner Bash will again reign supreme with hot music, dancing and the best talent on stage. Friday will be the beats of Digital Underground and on Saturday Fabolous will be throwing down live!

The Spring Break Tuner Bash has quickly become one of the most sought after locales for tuners and spring breakers from around the country. This years event will again be featured in Super Street and eurotuner Magazines as well as online, so don't miss out on the opportunity to join the fun!