I've done a few Targa Trophy events before, including last year's 1,000-mile rally across California (you can check out the story in our January 2014 issue). Contrary to what many of you might think, Targa isn't a place solely for Armani-wearing Lamborghini owners who drive triple-digit speeds on the shoulder. It's a safe, fun-filled rally series that encompasses a growing community of enthusiasts like you and me. Every participant has a passion for aftermarket tuning and appreciation of performance cars no matter what make or model—our FR-S was received with open arms.

Photo 2/14   |
The finish line at The Line hotel in Los Angeles. Bernardo Peña’s Liberty Walk GT-R lookin’ sexy on the streets, of course.

Competitors on Targa also have an even bigger passion for driving their cars—not just going from show to show, which is why I was thrilled to see rides like this month's cover car. Driving alongside 110+ modified cars such as Bernardo Pena's GT-R and DTM Autobody's Evo through Southern California's most beautiful back roads was surreal. From Eibach headquarters in Corona, California, through Angeles National Forest and into downtown L.A., we finished the 160-mile journey safely.

Photo 3/14   |   Freshly equipped with new Eibach suspension, we drove our FR-S the hardest we ever have and it handled amazingly!

It's an experience that's hard to put in words—you just have to experience it. I promise, you'll appreciate your car that much more, or even realize what needs to be adjusted. For our FR-S, we realized our suspension wasn't up to par after the last rally. Now, I can't express how much I enjoyed driving the car! However, I can't say Targa is for everyone. Hardparkers and show queens should probably stay at home. But for guys who love what they've built, want to drive 'em and don't mind making new friends, jump in. The water's warm.

Quick Question
From the words of Targa Trophy founder Jason Overell himself.

Photo 5/14   |   DTM Autobody brought out its show-stopping Evo on the run. It features a Do-Luck widebody, TE37SLs, Alcon brakes, ARC bolt-ons and much more.

What sets this rally apart from any other event you've put on?

This was our third annual Euro vs. JDM Festival, so it's becoming quite a tradition to organize a Targa Trophy event with this theme. The biggest thing that set this event apart from the previous ones was the fact that normally this event travels from L.A. to Las Vegas. For the first time, we kept it all in L.A., and it seemed to work out quite nicely as those who were at the event know the journey was epic!

Photo 6/14   |
After a morning car show at Eibach HQ, it was time for the competitors to embark on their journey.

Couldn't agree more. What was your favorite car to see on the rally?

Man, this is a really tough question, because there are always a ton of sick rides on any given Targa Trophy. The standouts had to be the Liberty Walk presence on the event, with my favorite one being Bernardo's GT-R. This thing shut down the car show scene when it came out, and I think most people think the car is just a bagged-out, garage-queen show car. Bernardo dispelled those thoughts by running the entire rally in the GT-R with his LB M3 in tow. The M3 has run in Targa before, but the GT-R is so extreme, it was insane to see that car rip up the course with the other exotics, Euros and Japanese cars.

Photo 7/14   |
Chillin’ off Angeles Crest Highway with the boys from Team Eibach. Check out the video on our website for footage of our FR-S hanging with them!

Easily our fav, too. What would you say to someone who's interested in Targa Trophy but hasn't pulled the trigger yet?

Don't be scared and give it a try—you'll be glad you did! If you enjoy sports cars, driving, lifestyle and like-minded people, then Targa Trophy is your venue to experience what road rally culture is all about. These events bring out some of the sickest cars, driving on the best roads in any given region. Combine this with amazing sponsors, people and lifestyle destinations—you truly have an experience that is one of a kind.

Photo 8/14   |   After a morning car show at Eibach HQ, it was time for the competitors to embark on their journey. 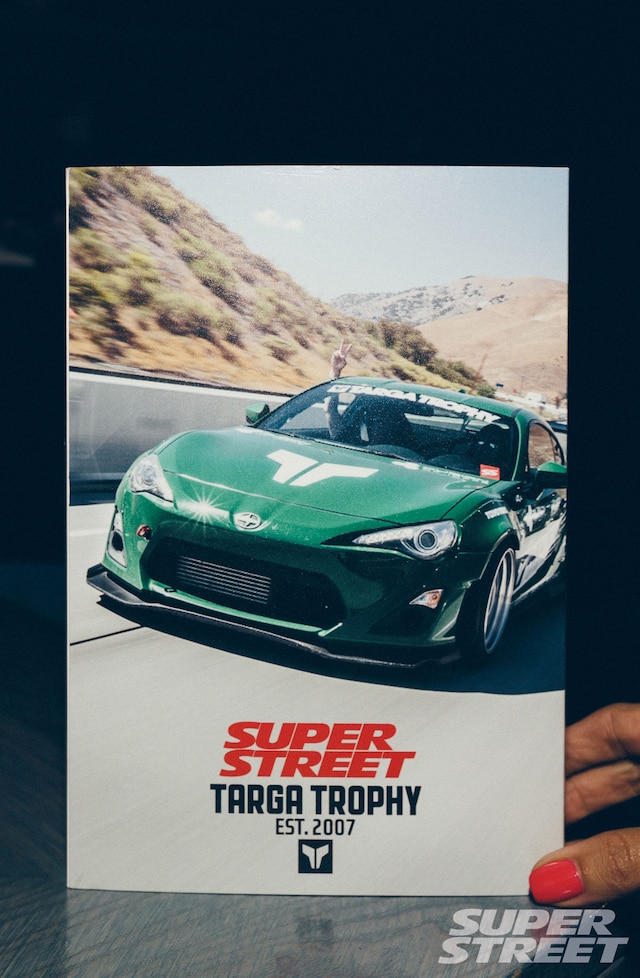 Photo 13/14   |
Awarded to the winner of the Euro vs. JDM Festival, a one-off Super Street x Targa Trophy iPad developed by Fusion of Ideas. So awesome we didn’t want to give it away!