BMW touts high performance and high efficiency for the near future 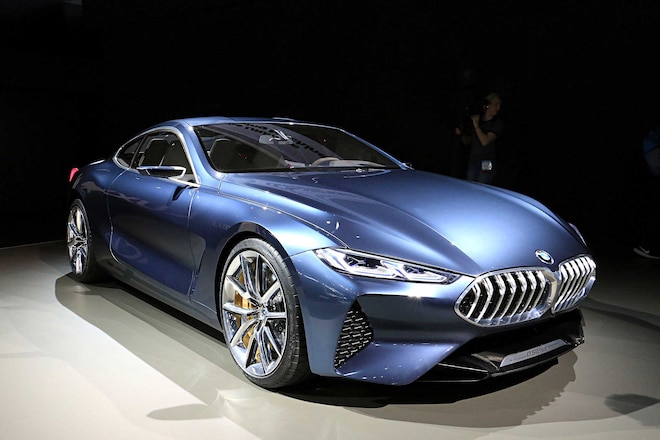 Seeking to strike a balance between consumer demand for potent capability and the need for increasingly eco-friendly machines, BMW showed up to the L.A. Auto Show late last year with its best and brightest from both ends of the spectrum.

While this created an interesting juxtaposition among the machines trotted out from Bavaria, the company was also keen to bridge that gap, showcasing a handful of models designed to deliver both driving dynamics and eco credibility in one solution.

But make no mistake, "the future is digital and electrified," says the automaker, and electrification looks to be playing a crucial role in the company's overall strategy for the coming years. 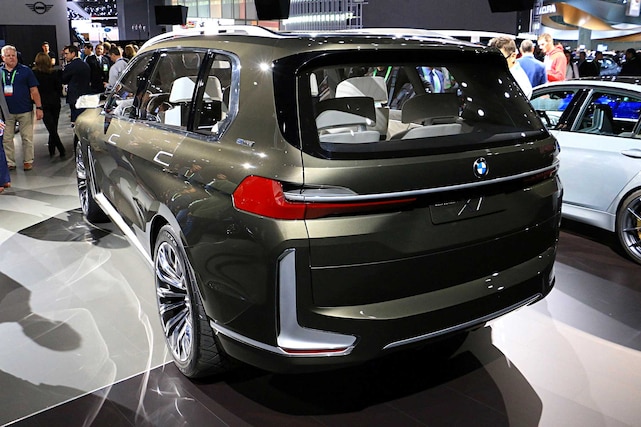 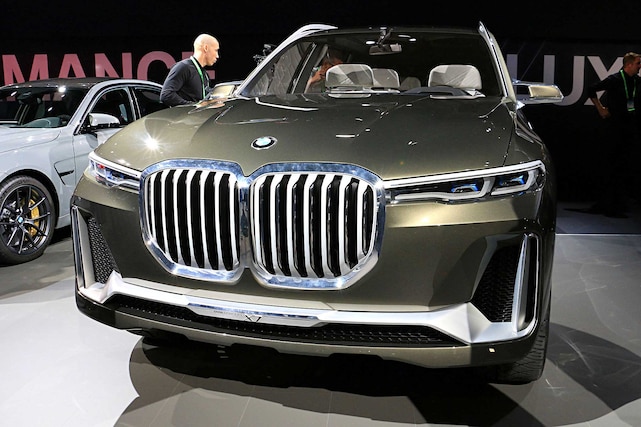 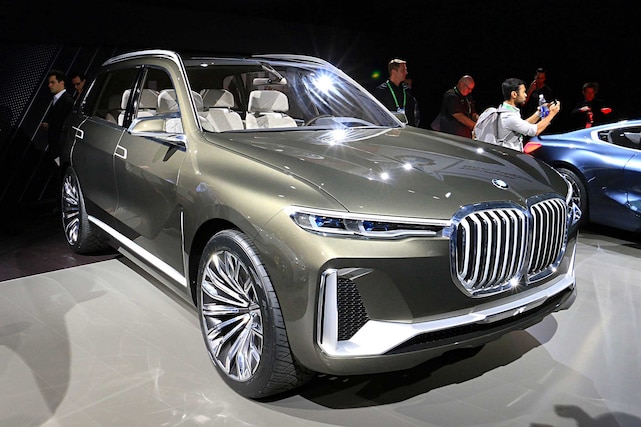 X7 iPerformance Concept: Envisioned to utilize both plug-in hybrid technology as well as a conventional turbocharged gasoline engine, this six passenger concept is the largest SUV that BMW has ever conceived, and offers bold styling to go along with its overall emphasis on delivering a premium luxury experience. While the vehicle displayed at the show is a concept, BMW has every intention of bringing the big brute to market, so expect a production version to debut sometime this year. 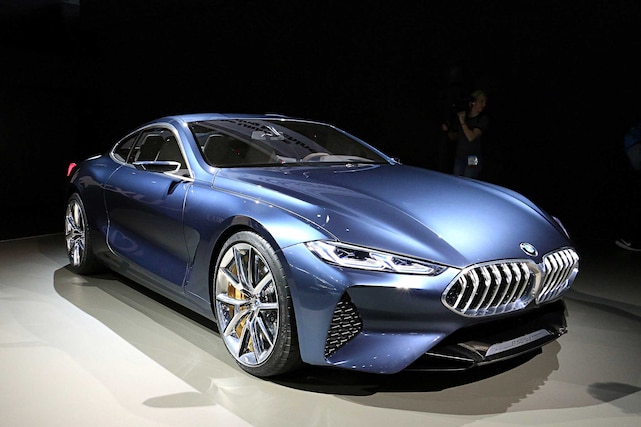 8 Series Concept: Perhaps the most visually compelling machine BMW showed recently, this concept serves as a precursor to the upcoming 8 Series production car, which is scheduled to launch in 2018. Like its E31 predecessor, the new two-door is said to deliver grand touring capability of the highest order. "The forthcoming BMW 8 Series Coupe will demonstrate that razor-sharp dynamics and modern luxury can go hand-in-hand," says BMW CEO Harald Kruger. "This will be the next model in the expansion of our luxury-car offering and will raise the benchmark for coupes in the segment. In the process, we will strengthen our claim to leadership in the luxury class."

M5: 2018 marks the debut of the first all-wheel drive M5 in the full-sized performance sedan's thirty-four year history. That system makes good use of the 600 horsepower, twin-turbocharged 4.4-liter V8 under the hood, as BMW says that the F90 M5 is the quickest M production vehicle ever, hitting 60 mph from a standstill in 3.2 seconds on its way to an 11.1-second quarter mile. Top speed is pegged at 189mph when outfitted with the M Driver's package.

A revised suspension is on hand to help the new M5 to put the power down properly while improving its road-holding capability, with a widened track, beefier sway bars, improved structural rigidity, and an optional three-model Variable Damper Control system all part of the latest M5's handling strategy. The 2018 BMW M5 will command a starting price of $103,595 when it goes on sale in the spring. 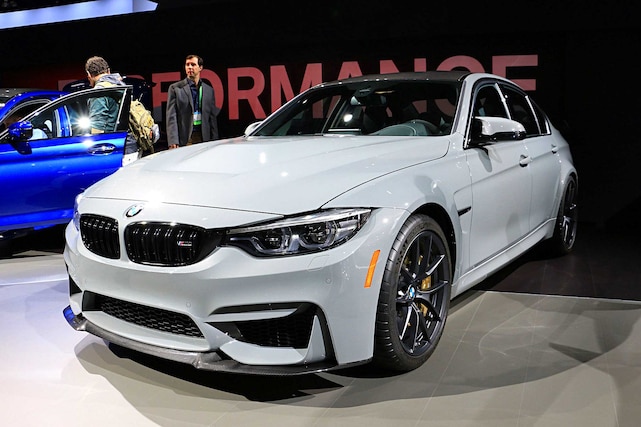 M3 CS: Like CS models of the past, this new special edition M3 focuses on reducing the M3's mass, and the extensive use of carbon fiber-reinforced plastics throughout the CS's bodywork yields a 110-pound weight savings versus the standard car.

Output of the 3.0-liter twin turbocharged inline six-cylinder engine is up too, now outputting 453 horsepower and 443 pound-feet of torque, which results in a sprint to 60 miles per hour in 3.7 seconds. Power is sent to the rear wheels exclusively by way of BMW's seven-speed dual clutch gearbox. 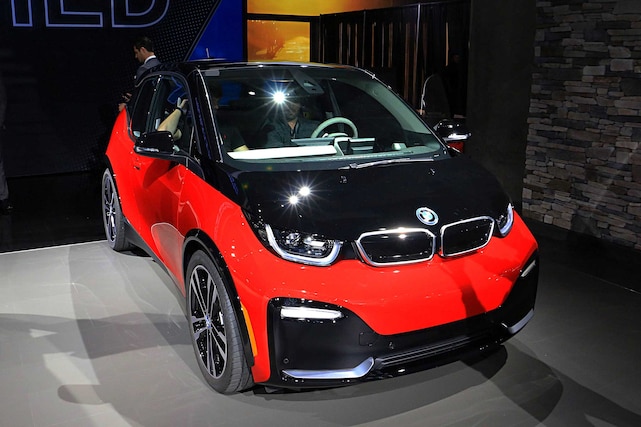 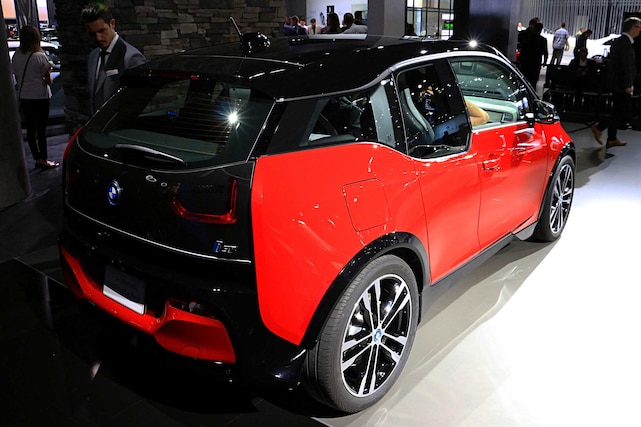 i3s: BMW's compact zero-emissions runabout gets a dose of performance by way of a high output electric motor that delivers 184 horsepower and 199 pound-feet of torque, giving the BEV a 0-60 mph time of 6.8 seconds and a top speed off 100 mph. This sport-infused model starts at $44,450 before any government incentives, and the first batch of production models should be in showrooms by the time you read this. 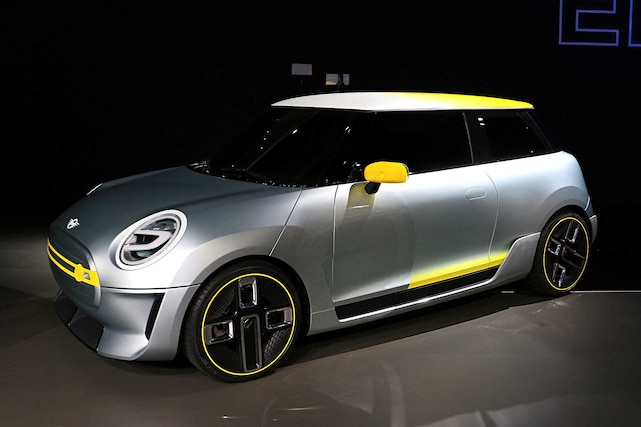 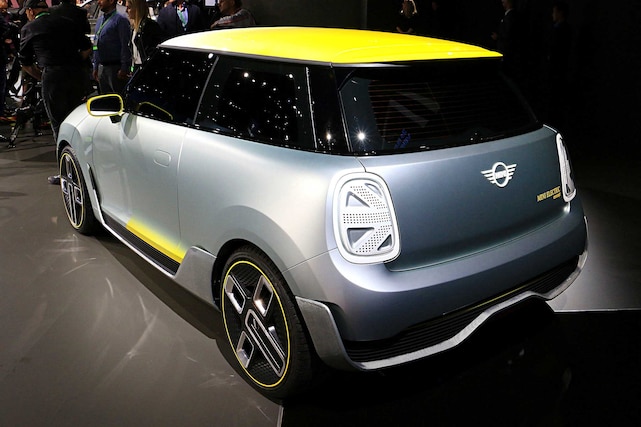 MINI Electric Concept: Envisioned for use in urban areas, this concept offers a glimpse into how electric day-to-day mobility might look in the years ahead, and "brings the iconic design, city-dwelling heritage and customary go-kart feeling of the MINI brand into the electric mobility age." Mini expects a production version to make its debut in 2019. 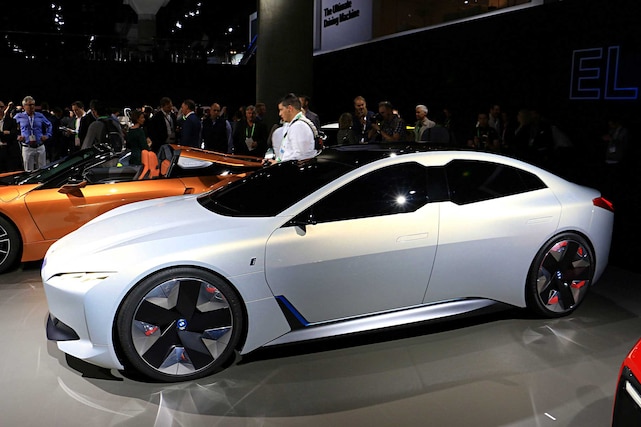 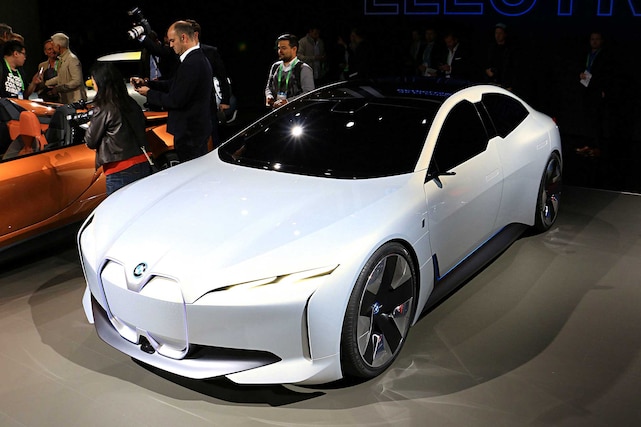 i Vision Dynamics Concept: Clearly aimed to capture the hearts and minds of the Tesla faithful, this all-electric four-door concept is said to deliver a four-second sprint to 60 mph, 373 miles of range, and a top speed of 120 miles per hour.

Perhaps of greater importance than its performance prowess is the design's emphasis on providing excellent outward visibility for all occupants, a feature that BMW predicts will be of increasingly relevance, as autonomous features take on a greater role in the driving process in the coming years. 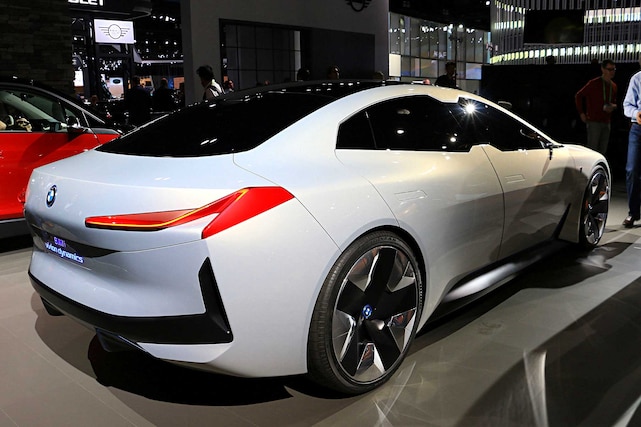 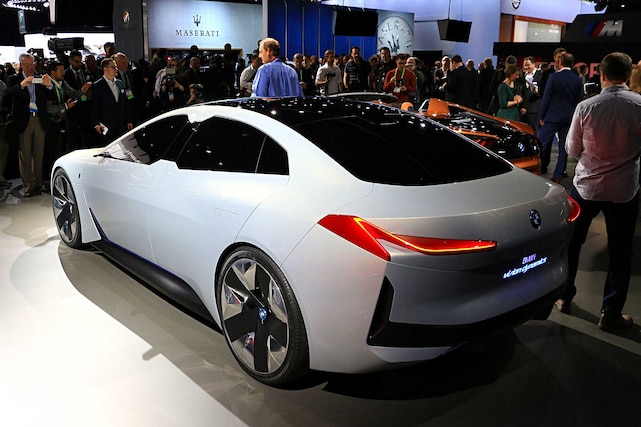 i Vision Dynamics Concept also showcases the future of BMW's new "less is more" design approach, which the company says we will be seeing more of in the coming years. 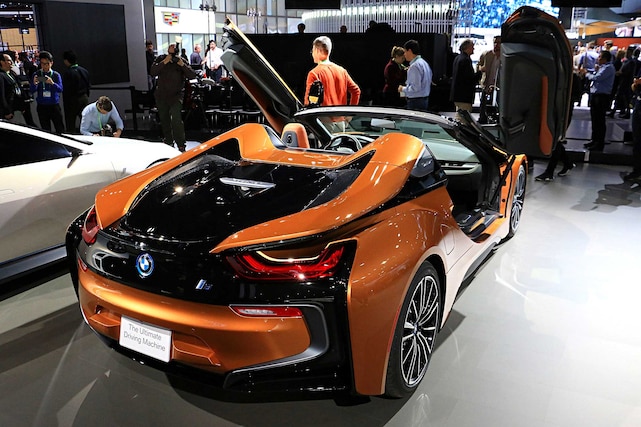 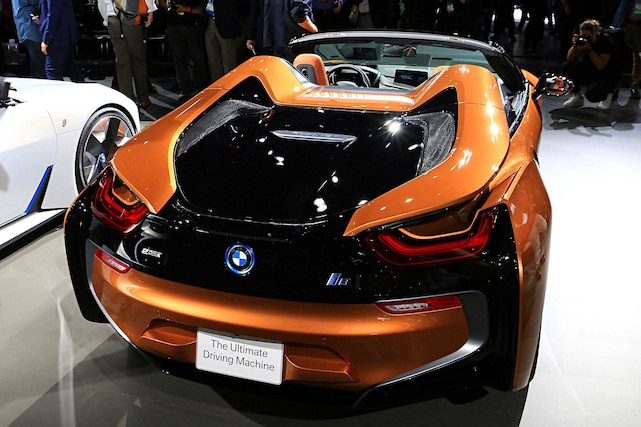 I8 Roadster: BMW's hybrid sports car finally drops the top for 2018 as part of a mid-cycle refresh. A heavily soundproofed soft top replaces the fixed roof here, and can opened or closed in 16 seconds at up to 31 miles per hour. The rear seats are ditched in favor of the electric roof's mechanical hardware. 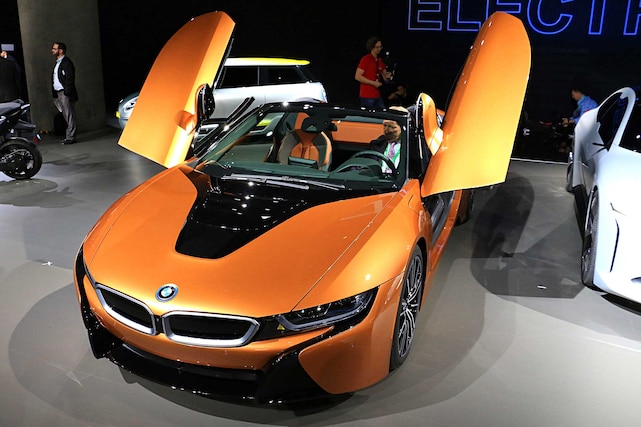 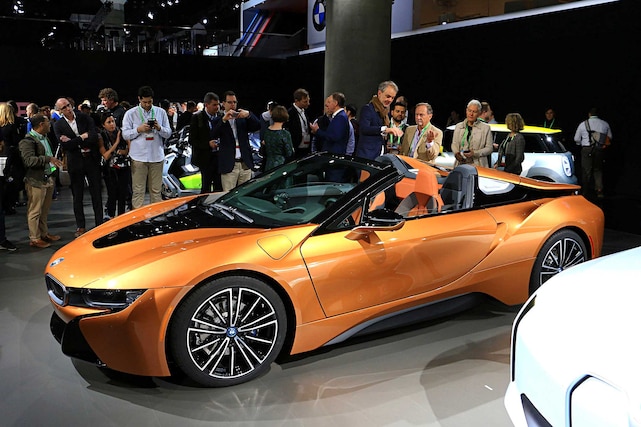 A new 11.6 kW-hrs battery is also on hand, providing an additional 12 hp and 18 total miles of all-electric driving range, while the 1.5-liter turbocharged three cylinder engine's power remains unchanged at 228 horsepower and 236 pound-feet of torque, yielding a combined output of 369 hp and 420 lb-ft. BMW says the Roadster is capable of a 4.4 second dash to 60 mph while the coupe can do the deed in 4.2 seconds, while both models are electronically limited to a top speed of 155 mph.