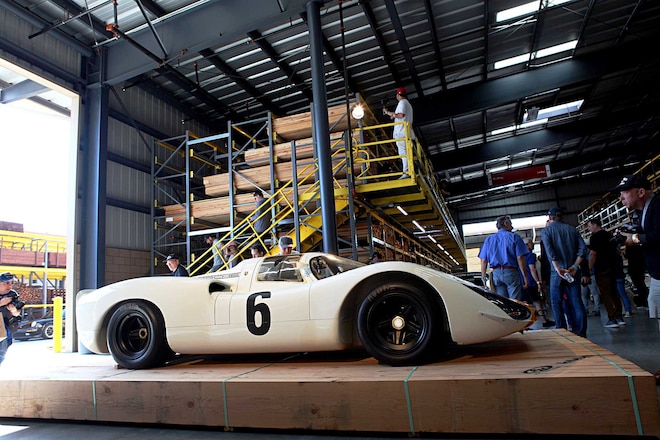 In a media-saturated world, it's difficult to establish an event as "must see," but works Porsche racer Patrick Long and business partner Howie Idelson have done exactly that. In five short years, their Lüftgekuhlt (literally aircooled) car show has become the one everybody should attend. It has also redefined what a car show should be.

Talking to Long, the show has been a very personal journey. It began with a desire to meet fellow air-cooled Porsche owners. Those gatherings led him to desire something more compelling and eventually to Lüftgekuhlt 1. Organized in a small Los Angeles parking lot, it attracted about 40 cars, selected for their rarity, uniqueness, or cool factor.

Luft 5 maintains the same values but its worldwide reputation means the organizers can procure the rarest vehicles from around the world. The most important cars are housed in a central area, but the remainder of the display space consists of air-cooled Porsches owned by members of the public who are selected by the organizers for display.

Besides the coolest cars and a great family atmosphere, one of the appeals of the Lüftgekuhlt series is that the venue changes annually. For 2018 it would inhabit the Ganahl Lumber Company's newest facility in Torrance, Calif. Its epic architecture and stacked lumber created the perfect contrast to the curvaceous Porsches exhibited among it.

There's also a very neat lumber connection for Porsche historians. The especially geeky will know that during WW2, Porsche was forced to move its design studio and engineering out of Germany. They settled in an old sawmill near Gmünd, Austria. Famously, the first 50 (or so - there's debate over the final number) Porsche 356 would be built here, hand assembled with aluminum bodies. Later cars would be built in Stuttgart from steel, which was more readily available. 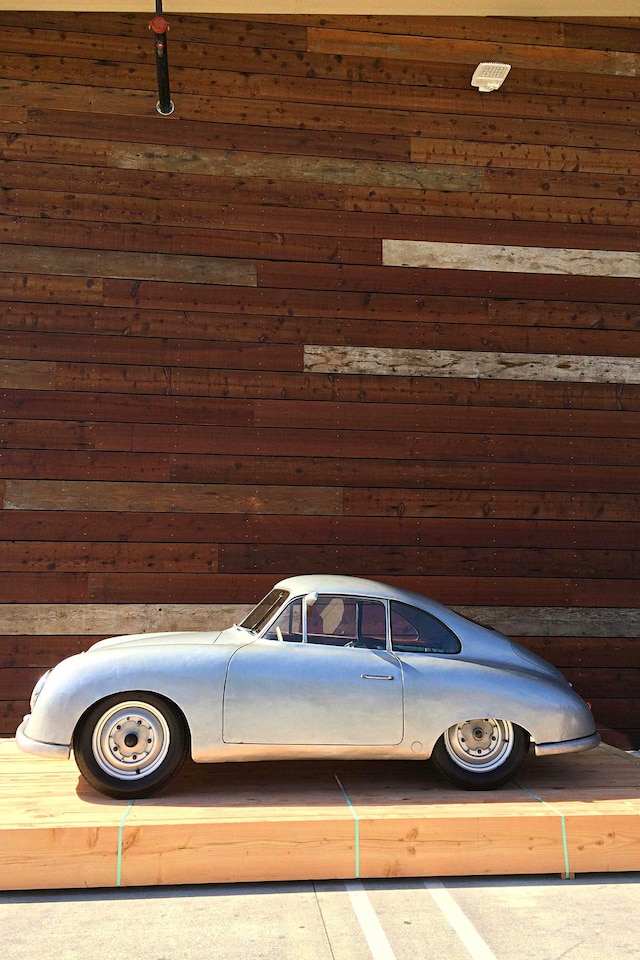 To celebrate the wooden connection, Mr. Seinfeld graciously displayed his Gmünd 356. Like several feature cars, it was mounted on a timber plinth to signal its elevated status. 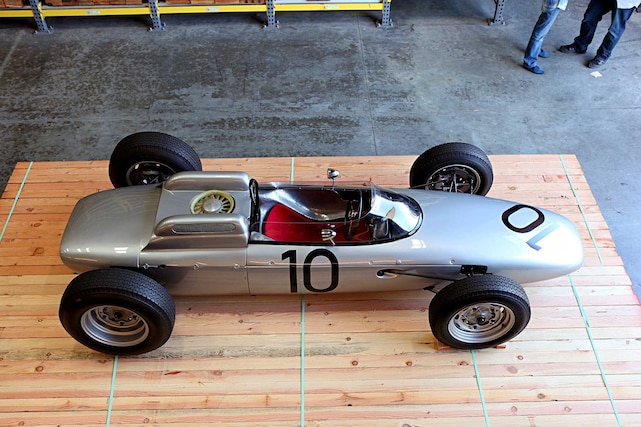 Vying for attention with the 356 was the Porsche 804. This was chassis 03, which Dan Gurney drove to victory in a Formula One race at the Solitude track near Stuttgart in 1962. It wasn't a championship race but Porsche wanted to stamp its mark and Dan obliged.

Gurney took the same car to third place in the German GP that year, losing out to Graham Hill and John Surtees in terrible weather and with a loose battery held in place with his leg. 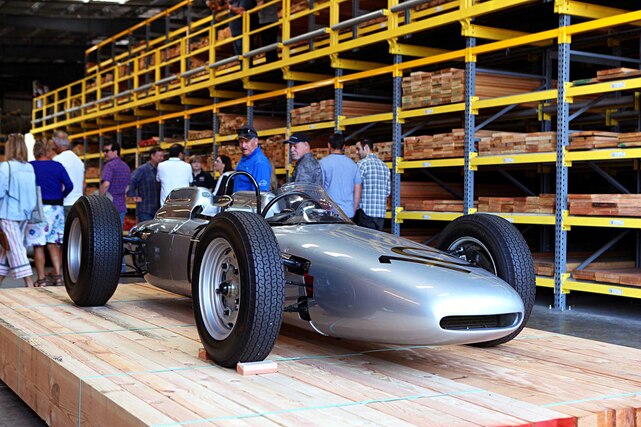 Porsche first F1 win came earlier in the season when Gurney won the French GP using a different chassis. However, the program was short-lived as Ferry Porsche decided to withdraw from the series at the end of the 1962 season. He claimed it was too expensive for the small company and needed to focus his engineers on developing the 901, which would later become the 911.

The Porsche 804-03 seen at Luft 5 was put away after the 1962 season and never raced again. Gurney recognized it upon being reacquainted by its fuel tank, which was designed to accommodate the tall American, allowing him to sit lower in the car. 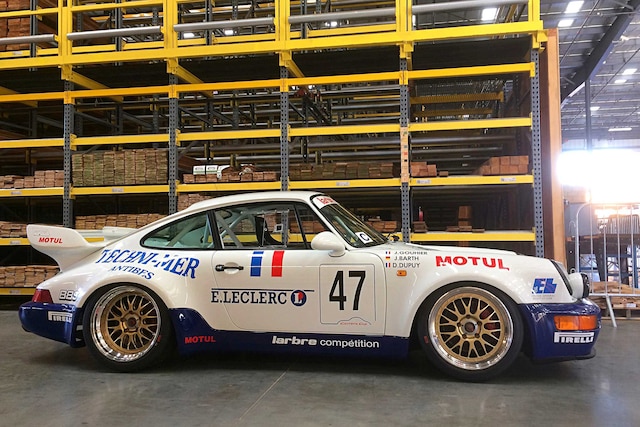 2018 represents the 30th anniversary of the 964 Porsche 911 and Luft 5 highlighted it throughout the venue. This included a host of sporting models and a rainbow of variants outside the main exhibition area.

The most significant 964 on display was a racing version which celebrated the 25th anniversary of its victory at Le Mans. Somewhat overwhelmed by the awe-inspiring Porsche 934 and 935 around it, the 1993 race-winning Carrera 3.8 RSR was no less significant.

The importance of the 964 RSR needs to be put in context. It arrived at a time when endurance racing was in decline, both in the prototype and stagnant GT class. Racers had little to choose from until Porsche revived its 1973 RSR formula. Back then it developed the 2.8 Carrera RSR, followed by the 3.0 RSR in 1974. For 1993, Porsche introduced the Carrera 3.8 RSR and took victories at Le Mans and Spa. It also opened the door to a new era of Porsche motorsport that would establish the company as the dominant force it remains today.

Visitors to Luft 5 were able to see the Larbre entry, which was originally driven by Jurgen Barth, Joel Gouhier, and Dominique Dupuy. The car was also immortalized on the official Luft 5 poster to signify its position in the marque's history. 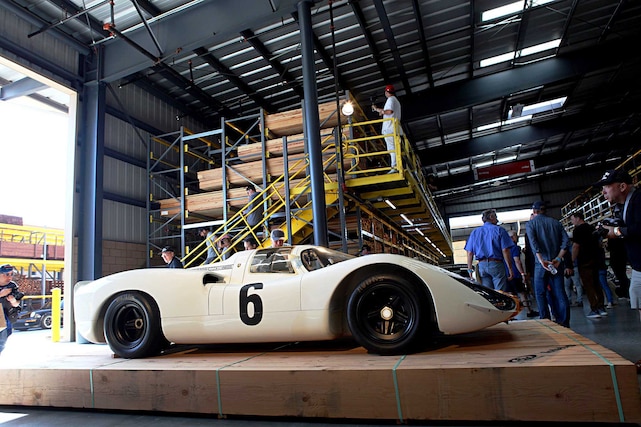 Since we're talking about Porsche racing history, we should give a nod to the 908K-010 on display. It's one of the rare short-tail (Kurzheck) coupes that was developed to optimize aerodynamics for specific tracks and first raced at Spa in 1968. 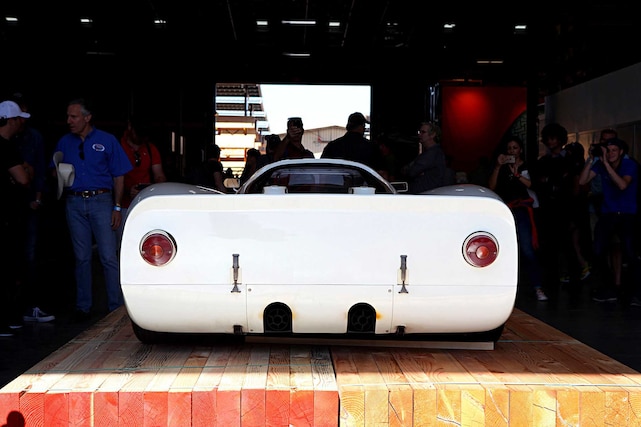 The car was displayed courtesy of RM Sotheby's, which will soon be auctioning it. They also permitted the "Moment of Noise" - a Lüftgekuhlt alternative to the moment of silence. It involved Vic Elford, one of Porsche's greatest drivers, climbing behind the wheel of his old racecar.

Much to the amazement of the gathered spectators, Vic fired up the 3.0L flat-eight engine and proceeded to bounce everybody's eardrums. Once it stopped, there was a moment of disbelief before spontaneous cheering erupted. It's not often you can get so close to legendary machines such as chassis 010, and few get to witness such exuberance from two legends. 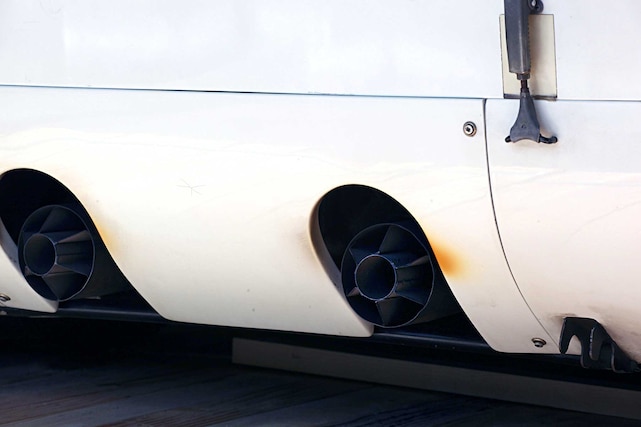 Sadly 908K-010 had a short racing career. Crashed in poor conditions by Jochen Neerpasch, who took over from Elford, the damaged car was returned to the race workshop in Zuffenhausen for repair. It was then stored before a collector bought it years later. 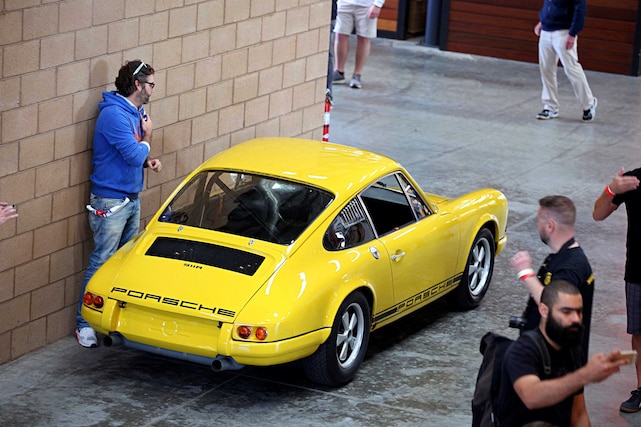 Of all the Porsche 911 models on display, and they dominated the more than 500 cars in attendance, this yellow 911 is one of the most significant. It carries the R4 internal code, denoting its significance as one of four 1967 prototypes built for the 911R model. It's also the least molested of the remaining prototypes and perhaps represents the starting point of the 911 as a high-performance sports car.

The aim of the 911R was to remove as much weight as possible and increase engine performance - a recipe that will sound very familiar to enthusiasts and owners of modern 911s. 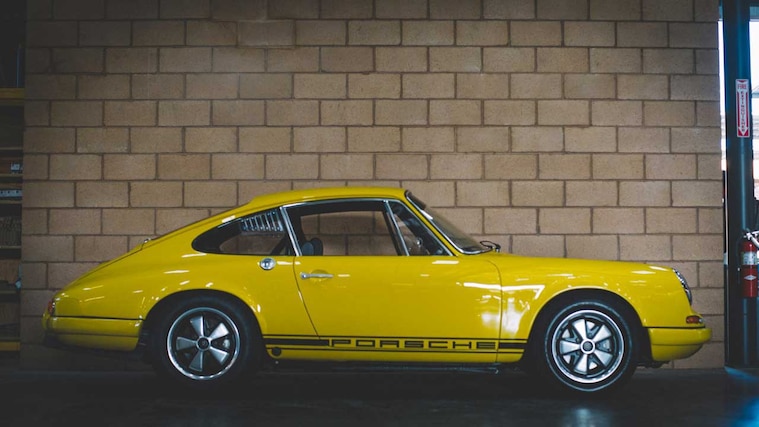 For the 911R prototypes that meant exotic metals and composite materials. This meant fiberglass doors, bumpers, and decklid. All the glass was replaced with Plexiglas, with the exception of the front screen, which was half the thickness of the regular production part.

These measures, and more, led to weight savings of approximately 440 lbs., which would be complemented by the engine pulled from the 906 racecar. Coded as 901/22, the engine received a number of modifications to its valves, carbs and more. It got a twin-spark plug cylinder head and boasted 210hp at 8000rpm. It also sported a limited-slip diff and the gear set could be quickly changed to suit its needs.

While only 20 versions of the production 911R were built, this is considered an incredibly influential car since it provided the foundation for every subsequent 911 performance car. 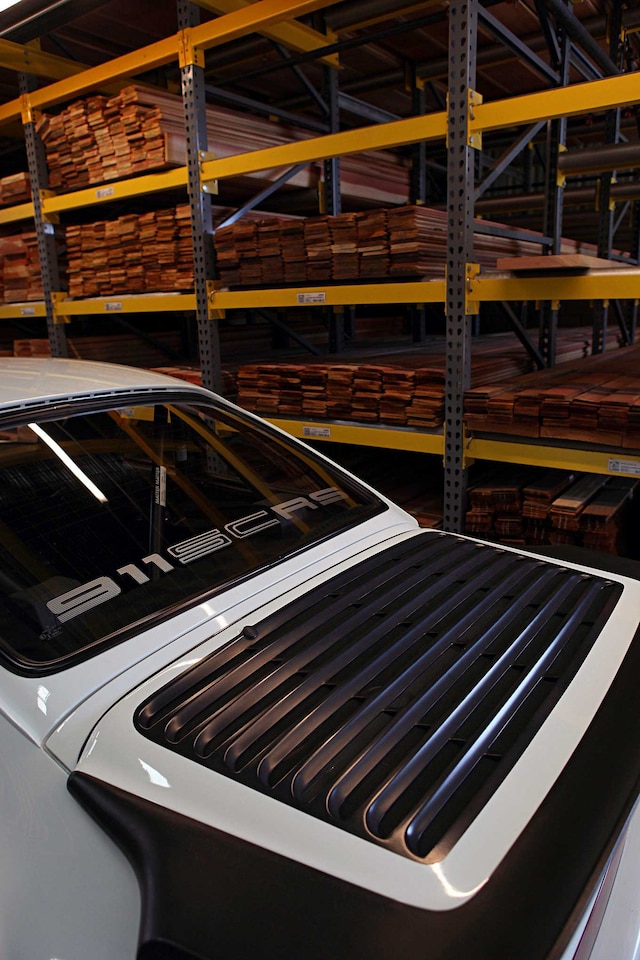 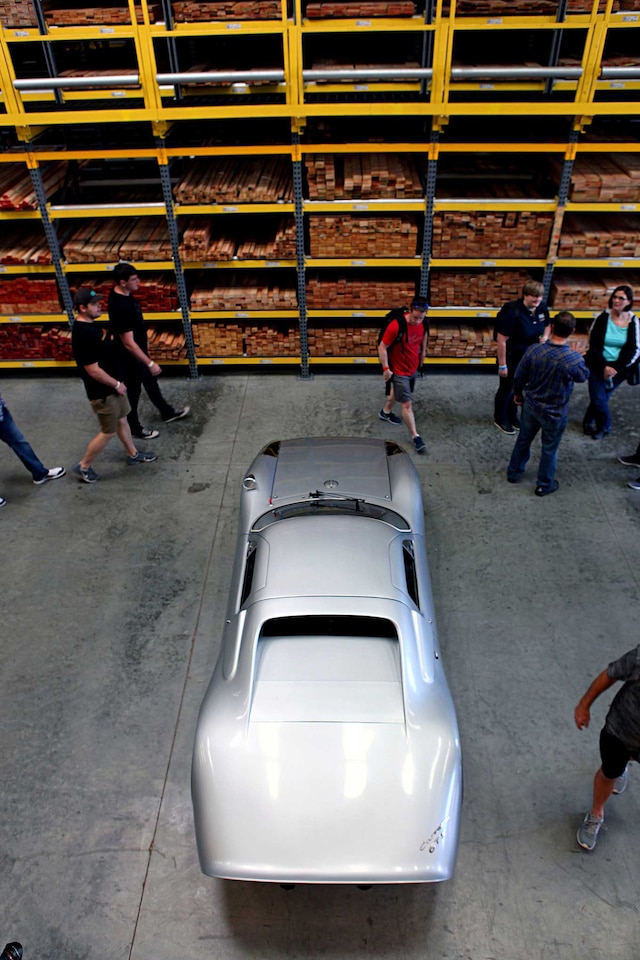 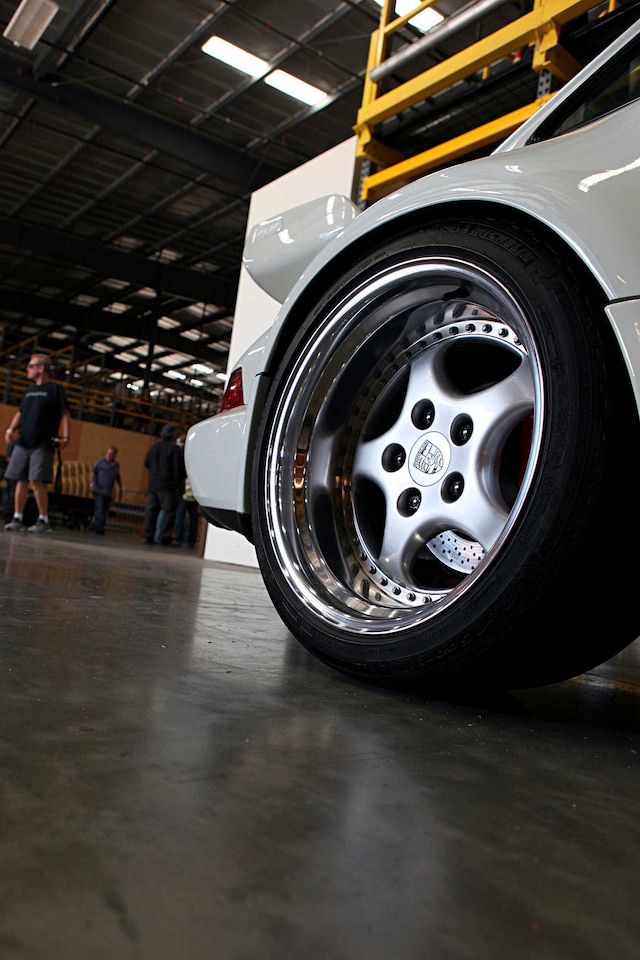