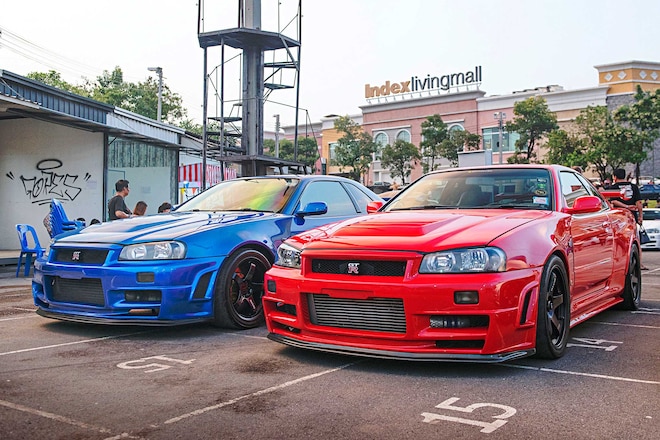 The people of Thailand, like the rest of the world, are entirely infatuated with Nissan's iconic Skyline family. Easily recognizable from any angle and praised for both its stout, AWD configuration and high potential for power production from the RB series engine line-up, Skyline's have proven to be one of the most beloved cars of yesteryear, and while they might be somewhat rare, even in Thailand, over 70 owners registered for the annual Skyline meet in Bangkok this year.

The actual number of cars that made it out to The Walk Kaset Nawamin, a pre-determined strip mall meet-up point, dropped dramatically when, almost on queue, a monsoon-level flash storm rolled in and dropped a level of rain fathomable only by Thai locals. The 3-hour onslaught was enough to keep some away, but not all, as over 40 Skyline owners were determined to make it to the meet. With the skies finally clear, Chad Burdette, a photographer who lived in Thailand for over a year before coming back to the U.S., happened to be visiting the country once again and snapped some photos for us.

The purist in you thinks that Skyline builds should be kept somewhat mild on the outside with a beast of an engine setup under the hood - and you're in luck as the cars from this club put function well before fashion. You'll find that many are sporting minor changes on the outside, avoid extreme wheel fitment attempts, and are instead built with the rugged streets of Thailand in mind, as well as frequent track events, so they're perched at a respectable ride height and look, poised for action at a moment's notice. The care and condition of this club's collection of Skylines is absolutely incredible. Enjoy! 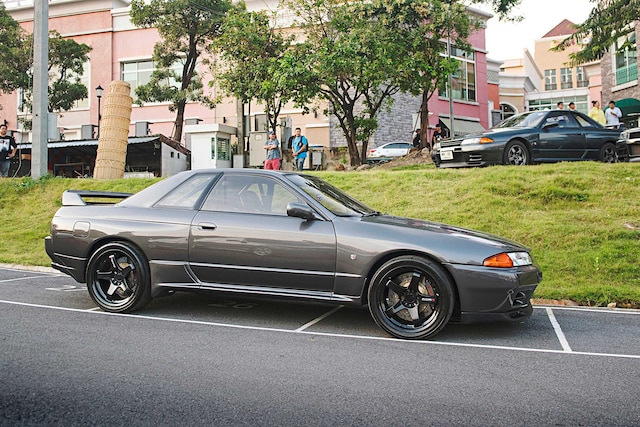 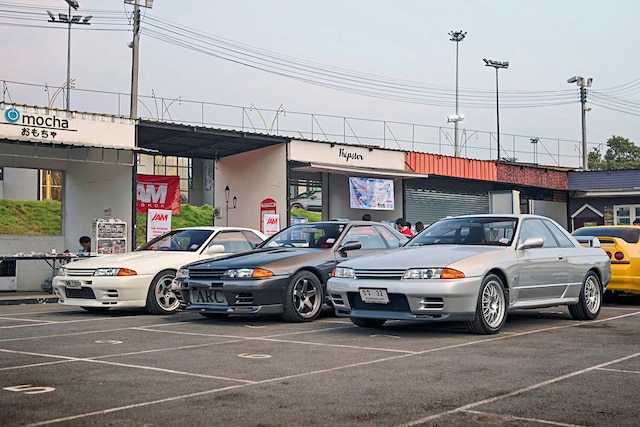 Everyone has their favorites, but the R32 has a special place in the hearts of Skyline fans worldwide. Its body shape separated it from the previous, far boxier body style of the R31, and it served as the mold by which later generation Skyline bodies seemed to pull inspiration from. 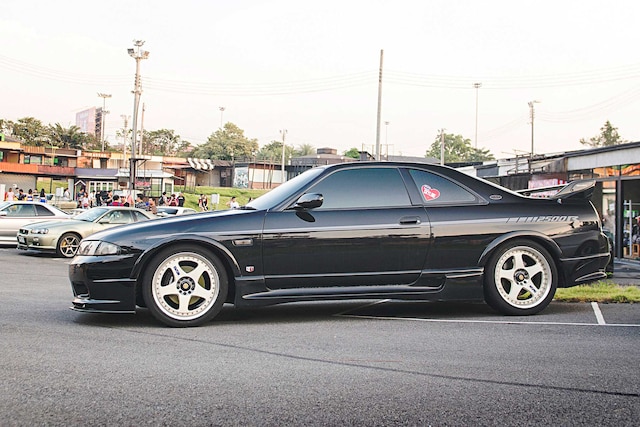 The R32, along with the mighty R34, seem to garner the most attention from the Skyline family, but it's a shame to leave the R33 out of the mix. Slightly sleeker lines and more modern headlights than its predecessor, the R33's exterior offered a sexier side of Nissan's flagship with its introduction. This black version is an excellent example, equipped with Rays Nismo LM GT-4. 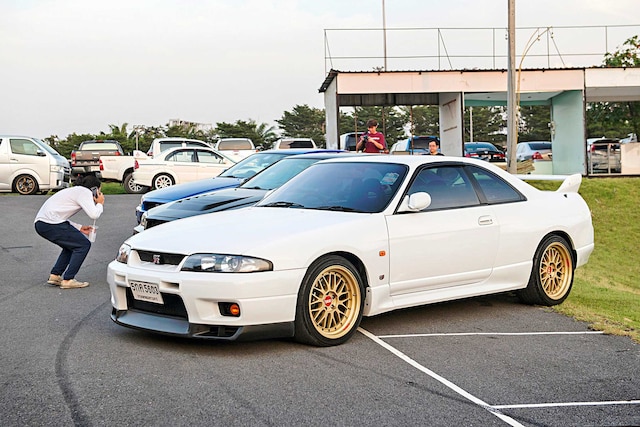 This version, kept simple and extremely well maintained, is fitted with classic BBS LM in gold. 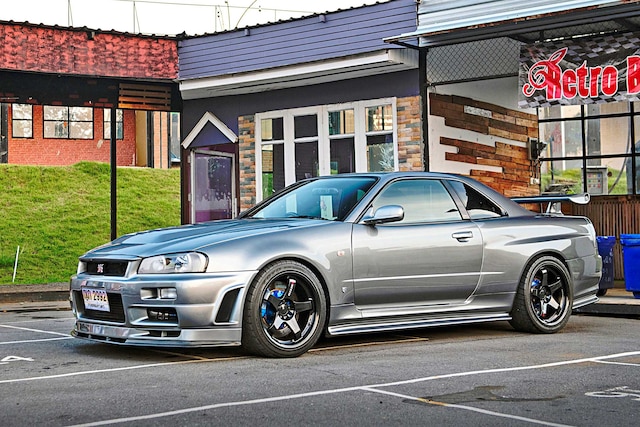 Sporting broader shoulders, thicker flanks, and an overall bulked-up appearance, the R34, in many eyes, appears to be the larger vehicle compared to the R33. 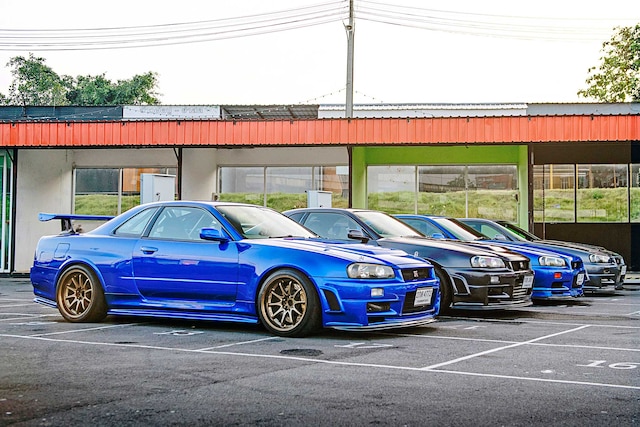 In reality, the younger sibling was shortened by a few inches front to back and maintains a slightly smaller wheelbase, as well. At a time when Nissan was feeling a significant financial crunch as a company, the R34 was somewhat of a gamble, but despite the reduction in available development dollars, it's proven itself to be well ahead of its time, improving on various aspects compared to earlier models. 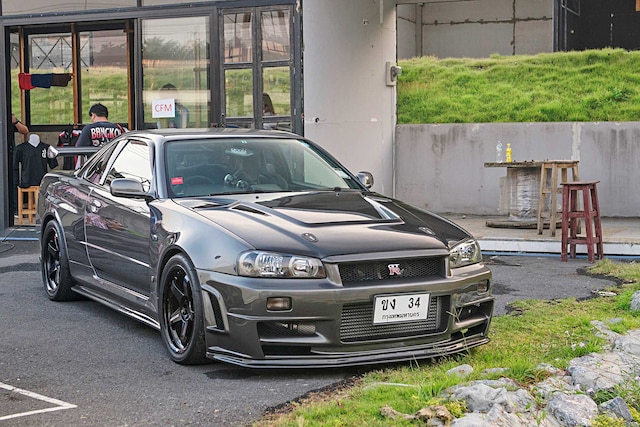 More than just a length adjustment and obvious facelift, the fifth generation GT-R carried with it aerodynamic, suspension, rigidity, and other improvements to continue the progression of one of the most iconic vehicle series you're likely to ever encounter...if you're lucky enough. 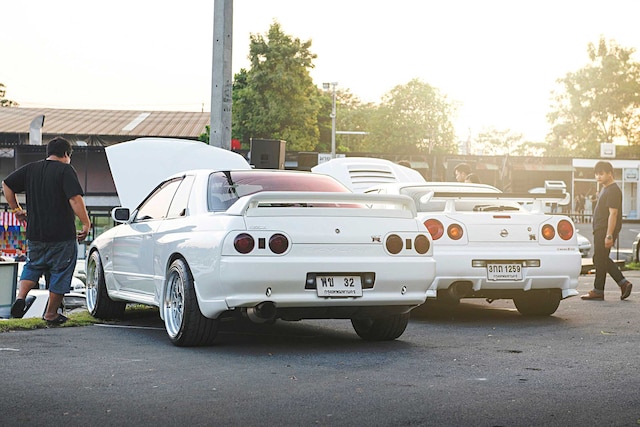 With an R32 right next to a 34 (both in stunning condition) the lineage is apparent, even with the wilder body pieces attached to the V-spec II NUR edition on the right. 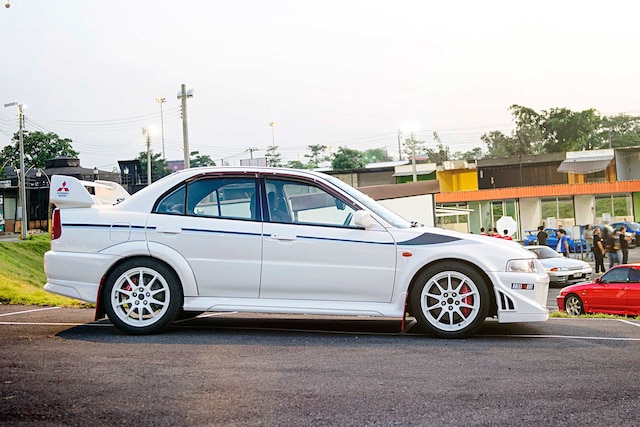 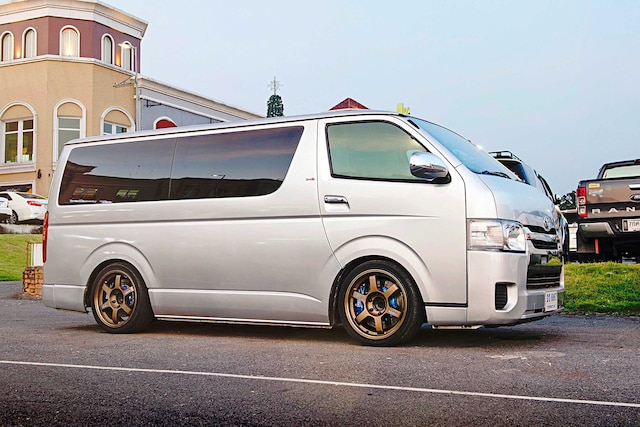 Ok, so these aren't Skylines, but this spotless Mitsubishi Evo 6.5 and Toyota D4D van, dropped on TE37s with Endless brakes were at the meet and both deserve a little spotlight. Only in Thailand!