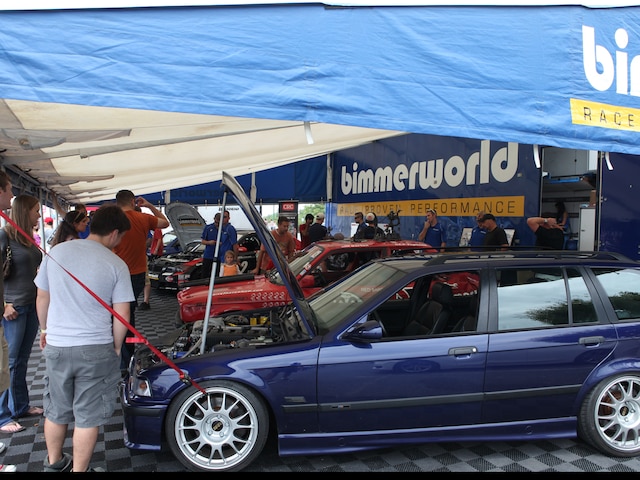 Although the 2013 Bimmerfest West show is almost upon us, it's with great honor that I can report on the amazing event I attended for the second straight year at Ripken Stadium in Aberdeen, MD last year.

Bimmerfest East was held on August 25, 2012 and attendance was reported at more than 1300 cars. This was an improvement over the previous year by almost 30%.

The headline sponsor was Turner Motorsport, which came out in force with its race transporter, housing various cars including its Grand-Am M3 racecar, a project F30 335i, ActiveE electric car, E36 M3, E46 M3, X3, and a supercharged E90 M3.

With all these vendors selling BMW-related products, visitors felt like little kids in a candy store. It was a great opportunity to not only purchase the items needed for a daily driver or show car, but also a learning experience to speak to newer vendors to the scene.

If you can keep your wallet in your pocket, the best thing to do at Bimmerfest is to walk the huge parking lot. It was wonderful to see so many cars from across the country.

Many people had driven in caravans to the event, and I was fortunate to meet a group of 165 enthusiasts from a DC Metro area club known as Bimmer Alliance. Not only is the show a great opportunity for clubs to share their BMW passion, but also find new members.

I was fortunate to enter my own 2000 BMW 323i in the "Battle of the Bimmers". This is a show contest with categories including Best of Show, Modified, Classic, Stock, Furthest Traveled to Bimmerfest and Highest Mileage BMW.

The competition was fierce, with many superb cars entered, including a 1989 E30 M3 owned by good friend, Eddie Farcon, a man considered by many to be a legend in the BMW show scene.

Battle of the Bimmers winners:

When the final award was announced for Best of Show, my name was announced to my sheer amazement. Given all the extraordinary cars present, it was humbling and an honor to receive this award.

I was asked to give a speech and explained that I modified my BMW with the sole intention of inspiring others to maintain good heart health. I'm a five-time open-heart surgery survivor, and now have a mechanical heart made from the same carbon fiber I used to modified my car.

The bond between my car and I is unique. I started life physically slow, and technology like heart implants and pacemakers made me stronger (like the Bionic Man but without the cool sounds). Likewise, my car started as a slow 323i automatic, but a twin-screw supercharger and manual transmission swap made it stronger and faster.

The main message I gave to the audience was to take care of their hearts and be thankful to be alive and driving the "Ultimate Driving Machine". I wake up every morning, take my first breath, and thank God for that privilege.

I'll never forget the look on the faces of the audience. The closeness I shared summed up my Bimmerfest experience, where everybody is an "extended family".

We wish to thank Bimmerfest organizers Jon Shafer, Tim Jones and Mark Jurista for a great show and the wonderful memories. The entire US BMW community is thankful for their time and effort in organizing both the West Coast and East Coast Bimmerfest events.

For more information about both events, visit http://www.bimmerfest.com and we'll have reports at www.europeancarweb.com