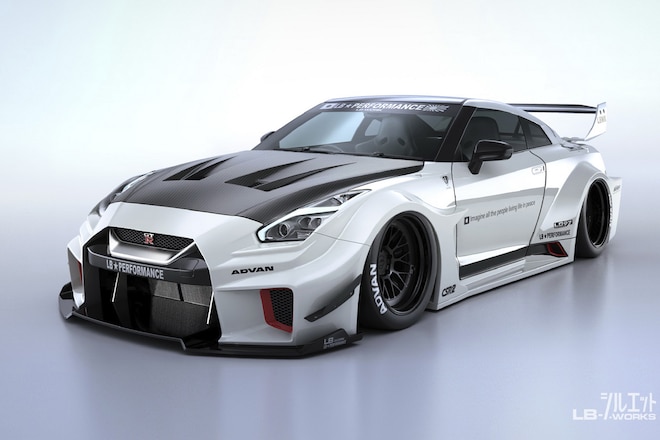 The widebody mad scientists at Liberty Walk in Japan set off a buzz of chatter earlier in the week when they released their latest for the R35 Nissan GT-R, the LB-Silhouette Works GT 35GT-RR (that's a mouthful) - not so much because the kit is anything revolutionary but more for the price tag. In its most expensive trim, the setup rings in for around $73,570 - many pointing out, that's more than the going rate for a used GT-R.

This is Liberty Walk we're talking about, though, and the high-end model is an all-dry carbon fiber proposition; a substantially less costly version - some $20k less - is available in a mix of fiber-reinforced plastic (FRP) and carbon, and you could save even more doing the parts in FRP, CFRP and dry carbon (this'll shave another $9k to get the setup in the ballpark of just $34K). The kit features front and rear bumper covers, front lip, widebody fenders, hood and trunk lid, rear trunk spoiler and diffuser, and a rear wing in two iterations, one GT style, the other simply called "New Style." The system with the GT wing is also a little less expensive, and if you absolutely have to take the layaway route, Liberty Walk will sell you the parts piecemeal.

The news of the fresh kit emerged in the context of the tuner hyping up their booth for the upcoming 2020 Tokyo Auto Salon. In addition to what they have for the GT-R, it appears new mods are in the works for the Ferrari 458 GTB and first-gen. Honda NSX platforms that should be ready by showtime. Liberty Walk will also have a Lamborghini Huracan in their booth sporting its latest cladding, as well as their renowned LB-Performance 308 GTB and Miura.