Mitsubishi’s performance sedan taken to the next level 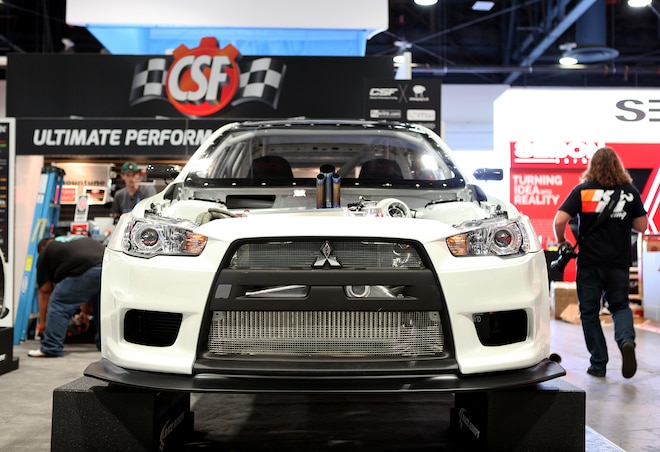 SEMA week is a big one for the automotive aftermarket, but that’s no secret. Everyone who is anyone is building something, typically last minute, in hopes of drawing attention to their brand, their sponsors, and in some cases, themselves. There’s no shortage of high-end builds, and though the show officially kicks-off on Tuesday of every year, we’re able to get early access while booths are being assembled and cars are being still being positioned and stickered. It’s crucial being that once the crowds arrive, it’s tough to get a photo, take a closer look, and in some cases, move from one booth to the next.

Making my way through random construction areas and avoiding numerous rather fast-moving forklifts like a game of Frogger (hey, old man – the kids call it “Crossy Road” now – Ed.), I stumble over a few loose extension cords and am greeted by a booth with a pair of cars positioned directly in front of its product display desk. The cars, both ghost white with dark wheels, certainly have a knack for drawing eyes. And though the Sheepeybuilt turbo kit-equipped Lamborghini, complete with its aftermarket bits peeking out of the rear end, is a jaw-dropper, it’s the widened and stripped down Evo I wanted to take a closer look at. 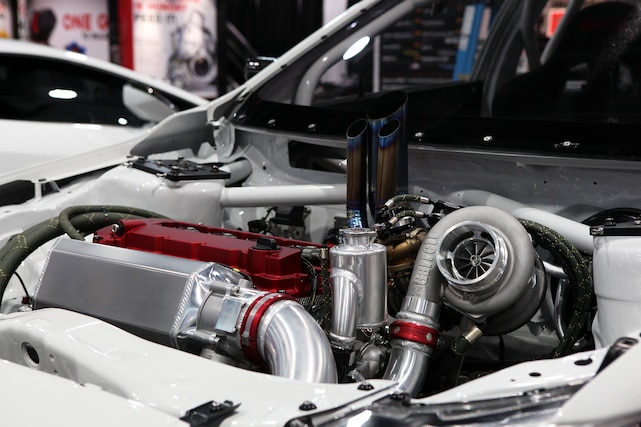 To get a car built to this level takes money, sure, but also a healthy amount of time and, like so many other SEMA builders will be quick to tell you, time is a hot commodity. To successfully finish the Evo in time for the big show, CSF’s Ravi Dolwani enlisted the help of MotoIQ, Techno Square, Sheepey Built, and Rywire Motorsport Electronics, and the result is nothing short of spectacular.

The engine bay will no doubt draw the majority of fanfare as this car makes its rounds throughout the social media-sphere over the next few weeks, and part of that is due to the surgically clean appearance it carries while also packing a custom turbo set up. The most obvious of which includes a Garrett Gen 2 GTX 3582R reverse-rotation turbo that hangs from a Sheepey Built stainless turbo manifold and those beautifully crafted Ticon titanium up-pipes that are waving at you. A pair of Turbosmart wastegates and blow-off valves help with the huffing and puffing, while up front, that large plenum is courtesy of Magnus Motorsports’ Race manifold fed by a Magnus 82mm Bosch DBW throttle body. 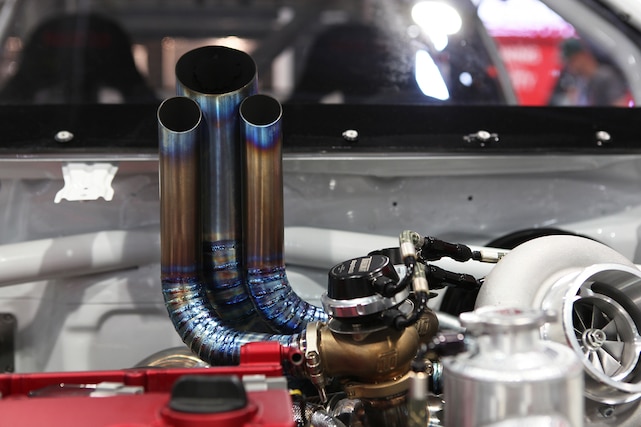 Adding fuel to the fire are Injector Dynamics 1700x injectors and to keep temps under control, CSF did what CSF does, and brought in their vertical-flow intercooler, CSF-Rywire-spec radiator and CSF bar/plate oil cooler. The brains behind the operation is a Syvecs S8 ECU combined with all sorts of complex goods, like the HP Electronik PDM, Aim Sports MSX Strada display and wiring tricks galore performed by the go-to shop in motorsport electronics, Rywire. The engine itself is a blueprinted GMG engine built for Pirelli World Challenge GTS class, but plans call for a new, fully-built powerplant by 5150 Racing after all of this SEMA madness is behind them.

Call it the unsung hero, but the suspension on this Evo should really be getting the spotlight. The list of modifications, which you can see stated in the spec list, includes custom fabricated front shock towers and custom caster/camber plates, JRZ coilovers, Whiteline tie-rod ends, numerous arms and links from AKMotorsports and custom pieces that go far beyond the typical SEMA build. 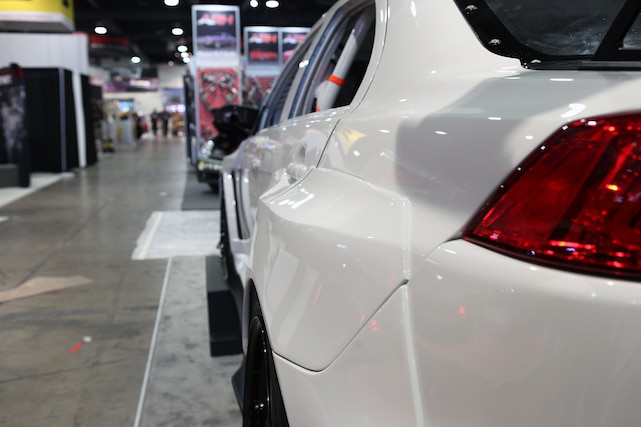 Even if the hood were on and you just noticed those fancy up-pipes, you’d no doubt take a closer look at the custom molded Streetfighter LA widebody kit by LTMW that was actually based on a design rendering by Jon Sibal, Inc. You’d also catch those Jun x Craft Square carbon fiber mirrors, Varis LED taillights, and Downstar Inc. hardware that’s used throughout the build, including the Lexan windows that surround the cabin. And about that cabin: most civilian-centric, OEM parts have been removed to make room for the custom FIA-spec cage that surrounds a set of Sparco RevII seats and steering wheel. Custom ASC Speedmetal interior paneling is expertly fitted and powder coated and if some of this feels somewhat familiar, we saw something similar with both Rywire’s Integra Type R and Big Mike’s Prelude in 2016 and 2017 respectively.

The end result of the hard work, stress and most likely a massive reduction in hours slept during the homestretch of this build-up, is a finished product that will no doubt garner plenty of attention this week for CSF and the rest of the parties involved with its completion. SEMA is known for bringing out some of the very best builds around but this type of build really raises the bar and puts those that aren’t in our market on notice; reminding them that there are more than just slammed cars on shiny wheels coming from our market. 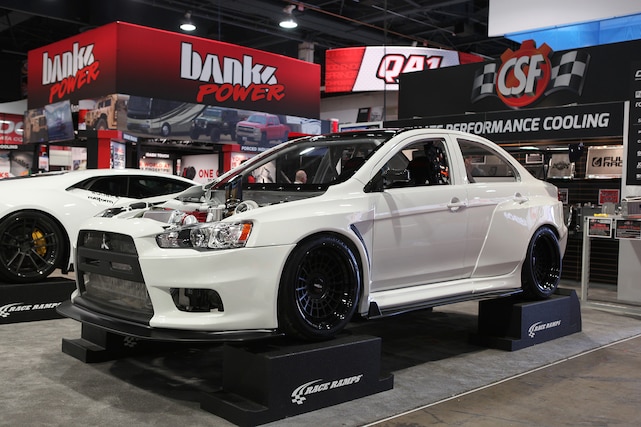 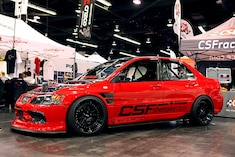