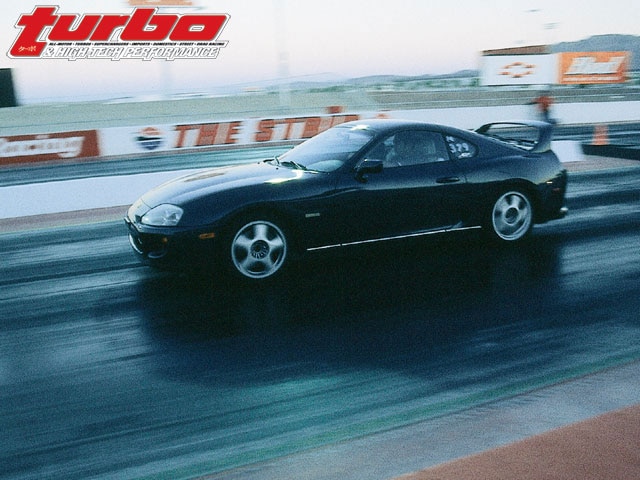 After we attended Supras Invade Las Vegas III last year, we told you it was an event that you would have to at least attend once-even if you don't own a Supra. The 2000 show rolled around pretty quickly; it was again time to figure out who was to attend the show among the staff at Turbo. With a bit of arm wrestling and some body slams, I was fortunate enough to take another trip to the city that never sleeps-Las Vegas, Nevada for the Supras Invade Las Vegas IV event.

Last year, we drove Project Maxima to the show. (I know, I know. What a sin to drive a Nissan-badged car to an all-Toyota affair.) We still got some surprised looks from some Supra owners but I couldn't figure out if they were juicing the ride or the 19-inch Volk AV3's wheels on the Max. This year we wised up and were able to con, I mean, lucky to borrow, Project IS 300 from the boss for the weekend.

Day One: Friday September 15, 2000(Supra ShowdownAt The Strip)After picking up the IS from the editor's house the night before, the day started with picking up my two traveling buddies-Jesse Wong from Blitz USA and Steve Chai from Chai Racing. We made great time heading to Vegas, cruising at 115 mph...I mean 70 mph. (If you own an IS, you know 115 mph feels like 70. The IS can eclipse 130 mph with three people and a trunk loaded with luggage.)

After stopping at the Mad Greek in Baker for some grub, we were back on the road. With another 45 minutes of driving, we were at the Nevada border at Buffalo Bill's Casino in Primm. There you can find a roller coaster that claims to have the longest first drop this side of the Mississippi-so we had to try it. Note to self: Do not try it on a stomach full of Mad Greek next time, the drop is pretty crazy.

Hopping back into the Lexo, we were off to Sin City. The sign marks that Vegas is 40 miles farther than Primm. (Could we make it 20 minutes?) We were close; the drive took us 22 minutes. (You do the math to see how how fast we were going.) After checking into our hotel, we headed to Luxor, as it was the official meeting point of the Vegas 2000 show.

We were bombarded with rows and rows of Supras chillin' in the parking lot. Although the parking lot scene was not part of the event, the sight was still amazing to see. After a short gathering, the group headed to the Las Vegas Motor Speedway (The Strip). At the strip we viewed MKIIs, MKIIIs and MKIVs battling it out for supremacy. For only $15, Supra owners were given the chance to stretch out the legs of their Toyotas and see what they were capable of on the quarter mile.

The competition was friendly among fellow enthusiasts. The highlight of the drag racing part of the show was UPRD's single-turbo MKIV that delighted the crowd with several quick quarter-mile passes. Their quickest pass of the day was a 10.56 at 144mph.

Day Two: Saturday September 16 (Show-N-Shine At The Luxor)Like last year, day two of Vegas 2000 was set aside for the Show-N-Shine. The Show-N-Shine gave the Supra owners the opportunity to show off the goods and all the hard work they have put into their pleasure toys.

One of the more notable vehicles at the show was a dark blue MKIII, outfitted with a Japan-spec. 2.5-liter sequential turbo powerplant. Also at the show was a sweet, light purple MKIV, powered by a GReddy T78 turbo kit.

The show included all types of enthusiasts, from the classic, clean MKII to the race-bred MKIV, it was all there. We were surprised to see so many Supra owners who made the voyage to Vegas from distant lands; some of the show participants drove from British Columbia Canada to attend. We saw license plates from Pennsylvania, Oregon, New Mexico, California, British Columbia, Arizona and Colorado. Though there was no official count of how many Supras were at the show, we estimate about 180-plus. Even in fall, the Vegas sun was blistering and the show was cut short.

Day Three: Dyno DayIdentical to the previous year's format, the last and final day of Supras Invade Las Vegas was left for dynos. The question? Who was going to gain bragging rights this year. Last year, Christian Rado and Bryce Danna battled toe-to-toe with Christian taking the win with a slim, 1.5-hp advantage (676.2 to 674.7). When we talked to Bryce earlier in the show, he was confident he would take the win. He also concluded he already laid down 800-plus hp on the Dynojet. Since then, he has added a new Powerhouse Racing intake and plans to raise the boost pressure for more power.

The Dyno Day was held at the brand-new Silver State Motorsports facility. The dyno facility is located conveniently located next to Las Vegas Motorsport Speedway for easy accessibility for racers and enthusiasts alike. A crowd of onlookers gathered around the dyno as each run proceeded. We witnessed a mildly modified, factory twin-turbo Supra pump out 395 hp to the wheels; a bone-stock Supra twin-turbo only makes around 285 ponies.

The real anticipation was Bryce Danna's Red Monster. To Danna's dismay, the impeller wheel nut came loose and destroyed his turbo. He vowed to come back next year with an even a bigger turbocharger to set any doubts of his red monster's performance potential aside. Unfortunately, due to overlapping of days for the Supras Invade Las Vegas and NOPI show, many of the higher-powered Supras were not able to participate in the dyno day.

The Vegas 2000 show was a blast. A day of drag racing, a day of car showing and a day of dynoing. Best of all, you get to play around Las Vegas at night. Did I forget to mention the show was free of charge? What more can you ask for? Special thanks to Mike Arnett for the dynos and all the people who helped to put on a great show. The next time the show rolls around, I will be at the top of the list to attend. See you in 2001.

The first day of the festivities for the Supras Invade Vegas IV was held at the Las Vegas Motor Speedway a.k.a. "The Strip."

Although these guys were not racing, they still came out to cheer their compadres.

For only $15, Supra owners were given the opportunity to test their rides on the drag strip. There were no official results, but, all and all, everybody had a fun time.

The highlight of the entire event was the car show held on the second day. Over 180 Supra owners came out to show off their goods.

As you can tell by the plethora of different state license plates, these guys are true diehards.