Our report on the goings on at Le Mans. 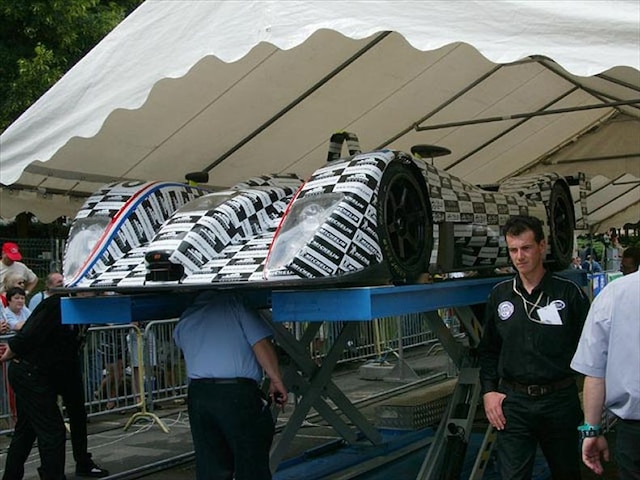 This was the year that Bentley simply had to win Le Mans. The Speed 8 cars, resplendent in British Racing Green, were at the end of a three-year development cycle. The rival Audis were at least a year old and no longer had full works support. Moreover, the six-strong line-up of "Bentley Boys" was one of the most talented sextets ever to grace the Le Sarthe circuit. If it wasn't now, then it was surely never.

In qualifying, everything went according to plan when Tom Kristensen in Bentley number 7 claimed his first Le Mans pole. "Pole means a lot to me," said the Dutchman. "For the past two years I've been fastest on the first day only to be beaten by [teammate] Dindo Capello." Kristensen was over 2 sec. faster than Johnny Herbert in Bentley number 8, while the Audi Sport UK R8, driven by Frank Biela, lined up third. In the GTS class, the Prodrive-run Ferrari 550 Maranellos had the measure of the Corvettes.

Heavy rain around noon on race day increased the tension for the teams. Local forecasters suggested that it would last until around midnight, but by early afternoon it had stopped, and at 4 p.m. sharp, Capello converted pole position into a first-lap lead. He was closely followed by Herbert, and within a handful of laps it became clear that the Audis had no answer to the pace of the 4.0-liter British cars.

Reliability aside, the only hope for Audi was that the Bentleys would need more fuel stops and that their narrower Michelins would suffer greater degradation. Sadly for them, such thoughts were eradicated at the first round of pitstops. The Speed 8's were able to complete 14 laps on a tank of fuel, just one less than the Audis. It also quickly became clear that Bentley would be able to run their tires for three or even four stints.

Bentley's optimism was compounded by the early retirement of the Audi Sport UK car in bizarre circumstances. Frank Biela attempted to overtake a Panoz before the pit lane, but he failed to complete the pass and, having missed the entrance, was forced to start another lap. "I knew it would be almost impossible to get around and the car started 'coughing,'" said a distraught Biela. "I had to park, but then I tried to get it back to the pits again by using the starter button but it was impossible."

It was a rookie mistake from a three-time winner. The driver line-up of Biela, Perry McCarthy and F1-refugee Mika Salo was one of the strongest in the field, and the car had been in a comfortable third place before the first stops. The sight of Biela frantically waggling the wheel on the Mulsanne Straight was one of the most potent images of this year's event.

With the lead Audi gone, it was left to the Japanese Goh and the American Champion Racing R8s to take the fight to Bentley. Jan Magnussen was particularly impressive in the Goh car, but the team was compromised by a couple of offs during the night. First, the car had to be repaired after Marco Werner damaged the nose. Then Magnussen left the track after suffering suspension failure. The team would eventually finish fourth, seven laps behind the lead car. "The car is good," said Magnussen, "but we lost too much time at night."

The U.S. Champion Racing Squad enjoyed a less troubled race. A brace of punctures and two new batteries were the only hiccups on the way to a solid third place. "That was the best we could do," said Stefan Johansson. "Our only hope was that the Bentleys hit trouble. They didn't, so there was nothing we could do." At least teammate Emanuele Pirro was able to enjoy a fourth consecutive trip to the podium. As day turned to night and back to day again, the Bentley number 8 of Rinaldo Capello, Guy Smith and Kristensen continued its relentless march to the flag. The Bentleys were visibly quicker than the rest of the field, and the gentle hum of its turbocharged motor enhanced the impression of quiet efficiency. It was an immaculate performance, and at 4 p.m. the car duly cruised across the line to claim Bentley's first win in 73 years.

"It's amazing that we could complete 24 hours without any real problems," said Capello. "We didn't even have a puncture." It was Kristensen's fourth Le Mans victory in succession and his fifth in total. "To put Bentley back winning this race with the heritage it has is very special," said the Dane.

The sister car, piloted by the popular triplet of Herbert, Mark Blundell and David Brabham, had a more troubled run to the flag. Two battery changes cost the team over ten minutes, and the number 7 lost additional time when they were stuck behind a different safety car to the lead Bentley. The problems cost the trio two laps, but they would still finish the race three laps ahead of the lead Audi. "We had a number of small problems," said Herbert. "We had the speed on the track, but not the luck." Bad luck seems to follow the Englishman like a faithful dog.

By early Sunday afternoon, the top four were set fair for the finish and attention turned to the race for fifth spot. With two hours to go, the Dome-Judd of the impressive Jan Lammers was engaged in a race against the clock to catch the Courage-Judd of Jean-Marc Gounon and the Panoz of Gunnar Jeannette. Lammers grabbed 6th after the Courage spun on the penultimate lap, and he finished nose to tail with Jeanette. It was an epic performance from the veteran, who was "pleased with the result."

In the GTS category, the Corvettes were blown away by the lead Ferrari of Peter Kox, Tomas Enge and Jamie Davies, which finished ten laps clear. The other Prodrive Ferrari was heading for second place until a right-front wheel bearing failed at 175 mph, plunging Anthony Davidson into the barriers at the Mulsanne Corner. It was a huge impact, and the young Brit required medical attention. He returned to the circuit for the finish but admitted to feeling "a bit groggy."

The GT class was billed as a classic battle between Porsche and Ferrari, but the Prancing Horse never managed more than a canter. The lead was passed around the Porsche drivers during the night, but the Alex Job Racing/Petersen Motorsports car eventually won by six laps, thanks largely to a top-class driver line-up.

All the runners in the LMP675 prototype category hit trouble, and the winning Noel del Bello Racing Reynard actually finished behind the lead GT car. It wasn't the quickest prototype in the class,, but at least it kept going.

As the crowds swamped the pit lane a little after 4 p.m., they were able to reflect on what had been in many ways an extraordinary race. Le Mans has grown used in recent years to one marque dominating, but it's difficult to think of another car that has run quite so faultlessly as the lead Bentley. Peerless reliability, top-class drivers and a team packed with proven race winners proved to be an unbeatable package. The Bentley Boys were worthy of the name.

European Car
Pasadena, Calif. Overrun with a Variety of JDM & USDM Honda Builds
Almost a year after the lockdowns began, the natives are beyond restless and car enthusiasts, like the Honda fanatics that attended the Old School Honda Meet on February 21st, might be the most eager to hit the road. With seven SoCal events (that we know of) all happening on that particular day, local streets and
Rodrez – Feb 23, 2021