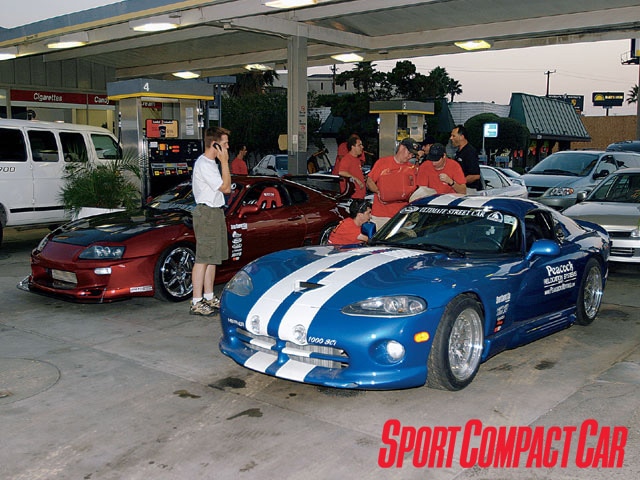 Not one USCC competitor built his car for fuel efficiency, which is why the real whining begins every year at the fuel economy test.

Take, for example, Paolo Castellano. We're guessing fuel economy was the last thing on his mind when he bolted a supercharger to his Viper's 8-liter engine. Or Roy Narvaez. We suspect he wasn't chasing a fuel frugality award when he attached four 1000cc/min. fuel injectors to the fuel rail in his 4G63.

With mods like these in mind, we took the least popular test in the USCC and made it even tougher. This year's fuel economy drive route followed a winding 72-mile path over California's Highway 18, Rim of the World Drive. With a total elevation gain of more than 5,000 vertical feet, we knew the whine factor would reach new heights. And it did. However, as a testament to the well-rounded nature of this year's contenders, the results were impressive.

We're not sure what sort of juvenile tactics competitors resorted to, but we're guessing there was a lot of coasting involved. After all, climbing 5,000 feet also means descending 5,000 feet and you don't need high test to coast down a hill.

Other factors played in as well. In an effort to encourage all competitors to perform the test on pump gas, we offered 10 bonus points for filling their cars before and after the test from the pump. Only Castellano's Viper and the AWE Tuning Audi S4 insisted on race gas and were denied the 10 additional points.

We followed the test protocol of sealing fuel tanks with duct tape and ink and recording odometer mileage before and after to be certain everyone played fair. When all was said and done, Matt Andrews' Supra stomped the field with a mileage number that would make any EPA ninny smile. Andrews' Suprarecorded a 38.9-mpg average-sipping only 1.85 gallons over the 72 miles.

Surprisingly, Roy Narvaez' Eclipse tiptoed through the test to record an equally impressive 34 mpg. James Chen's 350Z was third at 27.9 mpg. The only car below 20 mpg was Jay Esterer's thirsty Ultima GTR, which sucked down 3.85 gallons, bringing its average to 18.7 miles per gallon.

Over All
Despite mid-pack performances from all three, the podium is unaffected, with the Skyline, Andrews' Supra, and Gray's Eclipse in the top three spots. The big performance tests are coming, though, starting with Skidpad.