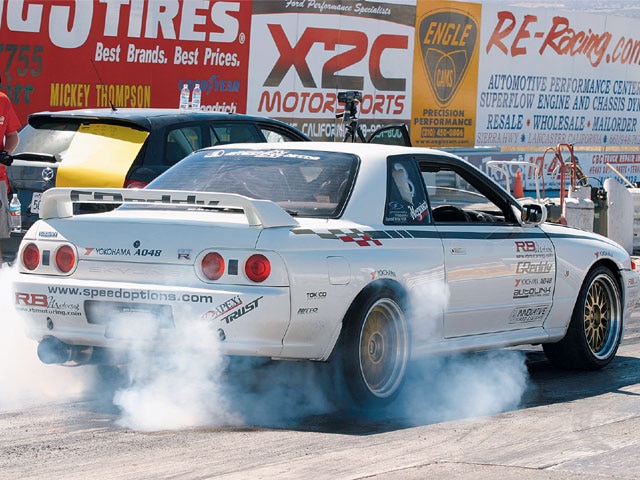 Screwing with a Nissan Skyline GT-R is like futzing with the "Mona Lisa". It's unlikely it will be improved upon, and it takes big, case-hardened, forged titanium balls to even try.

The owner of this Skyline with the aforementioned balls is Nick Wong, who brought this R32 to America from Hong Kong back in 1992 when it was new. Last year he sent it to RB Motoring in preparation for last year's USCC competition, was voted in and didn't win. In fact, a Skyline has never won USCC, which is borderline bizarre in itself. But this car has evolved significantly in the last 12 months and the dam is bound to break sooner or later.

The list of modifications to this car is staggering. Just the enormous weight of all the printed type on this page should be giving you a muscle cramp as you read on.

While the plan was to stroke Wong's existing RB26DETT to 2.7 liters with a GReddy kit, what wound up in the car for this year's USCC was originally installed in the R33 of A'PEXi's Wen Lai. Using Wen Lai's stock engine as the base, RB Motoring added the cylinder head from the seized engine it had built for our Time Attack Challenge (August 2004). The bottom end of this engine is about the only thing stock on the car.

The stock bottom end carries a head with A'PEXi cams driven by adjustable cam gears and a GReddy timing belt. It's force-fed by two Innovative Turbo GT72 turbos that take air in through A'PEXi air filters while a GReddy Type-R wastegate ensures not too much air is pushed in. The pressurized air runs through HKS hard pipe and is cooled by an ARC intercooler, while dual mass airflow meters from a 300ZX Twin Turbo modulate the heave.

Fuel comes from the stock Skyline tank being sucked dry by twin Nismo pumps, which send it along to dual fuel rails and then huge 1000cc SARD injectors. The engine's frenzy is managed by an A'PEXi Power FC L-Jettro computer and the exhaust travels through a custom downpipe and the stock cat to an RS-R 4-inch system.

But Sean Morris at RB Motoring knows that getting the motor into a Skyline is only the start of the challenges. "The hard part is figuring out how new things go," he says. "I decided to go with a Getrag [six-speed] transmission that had been sitting around RB Motoring for a while. We'd upgraded it with a Nismo input shaft and had an ATS carbon triple-plate clutch for it. I took the 1,350-pound pressure plate from Nick's ATS clutch to replace the 1,100-pound pressure plate we had on the triple plate clutch. This was the first six-speed Getrag installed in a U.S. [R32] GT-R."

Brembo brakes (14 inches up front, 13.6-inch rotors out back) do the whoa chores, with pressure coming from a Nissan Stagea master cylinder feeding Tilton proportioning valves. The ABS? History. Everything contacts the pavement through a set of 265/35R-18 Yokohama A048 tires on BBS 18x10-inch LM wheels.

The body is relatively stock. Only an Electra carbon-fiber hood and Nismo intercooler ducts indicate the radically altered reality they cover. In fact, the best description of the paint comes from RB's Morris, who calls it "thrashed and hammered."

Inside, the cockpit is encased in a King Motorsports-built roll cage, has a set of R34 seats up front, Sparco harnesses, a Nismo steering wheel and an Alpine sound system with a DVD navigation system and a DVD player included.

Most everything on this car has been whacked, packed, stacked and attacked even though the car they started with is already one of the greatest ever built. Fearlessly modifying what most people would already consider damn near perfect is just the sort of spirit USCC is built around. Now let's see if it pays off.