Every year, in a time-honored tradition, loyal Volvo fans from across the United States converge on sunny Davis, CA to celebrate their love for the marque. Organized by the Golden Gate Chapter of the Volvo Club of America (GGVCOA), the 2013 event marked the 15th anniversary of the car show, swap meet, autocross and rehab party.

Back in 1998, Volvo enthusiasts in the Bay Area were looking for a way to connect with other owners, and the idea was born for an annual gathering. What started as a bunch of P1800 enthusiasts, blossomed into a full car show that would settle in the center of the energetic college town of Davis.

Over the years, attendance has increased and so have the activities. So now it includes a popular autocross and swap meet, which draws more of the Volvo faithful.

Club president Justin Lee and the many people who help to make the event happen, had seen more than 150 cars register for the show, with another 50 or so lining the perimeter of the park.

The weekend kicked-off with the autocross that saw 50 Volvos cut the cones and squeal tires for charity. In fact, all proceeds went to The Leukemia & Lymphoma Society.

After that event, the infamous Rehab Party allowed attendees to dyno their cars, hang with friends, enjoy a barbeque and pay a few bucks (to charity) for a swing of a hammer on a non-Volvo car - every year the club buys a car people pay to destroy. It starts with a brick on the accelerator to blow the motor, followed by broken windows and dents in the name of raising money for a good cause.

Sunday brought not only great weather but a good array of Volvo vehicles as well, ranging from vintage concours winners to old racecars and highly modified modern examples. There was even a special guest appearance by a European-spec V60 wagon that just happened to be in the area.

More than 30 awards were handed out, and the raffle had plenty of big prizes, including software from Polestar, an Elevate inlet manifold, suspension parts from IPD and goodies from both RSI and Grom Audio.

If you're a diehard Volvo fan, this is a fun West Coast event you'll certainly enjoy. Rumor has it the Golden Gate Chapter of the Volvo Club of America is looking to make next year's event the biggest yet, so you might want to check out the website at ggvcoa.com. 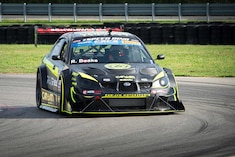 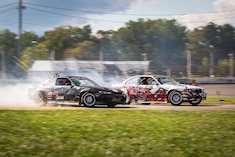