Fredric Aasbo in the Rockstar Energy Scion tC picks up third win of season, takes lead in points with 2 events to go

Mother Nature must have beef with Formula D this year. For a third straight Pro event - Round 5 at Evergreen Speedway outside of Seattle, Wash. - the skies clouded over and delivered rain that wasn't nearly as much of a deluge as Orlando or Wall but annoying all the same. It hit at one of the most critical points of the day, during the semifinals and final of tandem eliminations, in what has historically been one of the most important events of the season.

Before the rain, the fast Evergreen course saw Kenny Moen in the Bridges Racing Achilles Gatebil Nissan S14 take the number-one qualifying spot on Friday. He was tailed closely by a trio of top scorers - all from camp Scion - in Ryan Tuerck and his Retaks Maxxis Nameless Performance FR-S, Fredric Aasbo in his Rockstar Energy Hankook tC, and Ken Gushi in his Greddy Hankook FR-S. One-time points leader Odi Bakchis, in the Feal Suspension ARK Performance Nitto 240SX, wound up qualifying 11th.

Highlights from eliminations included a rematch between Forrest Wang in his Get Nuts Lab S15 and "Mad" Mike Whiddett in the Red Bull Mobil 1 Mazda MX-5 in Top 32. The two met at Road Atlanta earlier in 2015 in a smoke-filled doozy, and did so again at Evergreen, a pairing that went to two One-More-Time tiebreakers. Both drivers struggled in the chase position, but in the end Whiddett improved enough over the six laps to earn the win.

While Whiddett and Wang staged a display of supreme tandem car control, Tyler McQuarrie in the Mobil 1 Go Pro Chevrolet Camaro and Justin Pawlak in the Roush Performance Car Crafters Ford Mustang put on an exhibition of zero self control during Great 8. In probably the most insane bit of carnage we've seen all season, McQuarrie and Pawlak took to smashing their cars against each other's after incidental contact on the oval's bank.

McQuarrie's Camaro, from the lead spot, was knocked out of drift after tapping the wall with the rear of the car (technically this is where the match ended), and Pawlak, having nowhere to go, slid into McQuarrie a split second later, which in turn helped push the Camaro out of bounds at the entrance to the Power Alley. It went south from there, the two bumping one another until the Mustang plowed into the side of the Camaro and left it for dead in the wall outside of Inner Clipping Point 2 (incredibly our shooter failed to get a photo, but you can see the aftermath on the Formula D blog).

Pawlak was awarded the victory, in more ways than one, and went on to pick up third place overall after losing to ultimate second-place finisher Alec Hohnadell in his 11Racing S14. Hohnadell lost to Aasbo in a rain slickened, slow motion final battle to secure his first podium as a Formula D Pro, and Aasbo claimed his third event win of the 2015 campaign, thrusting him into first place in the point standings by a margin of 76 markers. Both Aasbo and Hohnadell had to go through two former series champions each to get to the podium, Fredric besting '13 champ Mike Essa in the SLP Performance Yokohama Camaro in Top 16 and '10 champ Vaughn Gittin, Jr. in the Monster Energy Nitto Mustang RTR in Great 8, and Alec outlasting '09 and '14 champ Chris Forsberg in the NOS Energy Hankook 370Z in Top 16 and '12 champ Daigo Saito in the Achilles Radial GT-R in Great 8.

With just two rounds left on the Formula D Pro calendar, every point counts from here on out. 214 markers are left on the table (107 per event), which technically makes every driver down to 16th in points (which is currently Dean Kearney) viable, however unlikely. That list for sure gets whittled down further after the next event, round 6 of 7, at Texas Motor Speedway on August 21 and 22. Will Aasbo cruise to his first championship? Or will Bakchis, Tuerck, or Gushi play spoilers? We can't wait to find out. 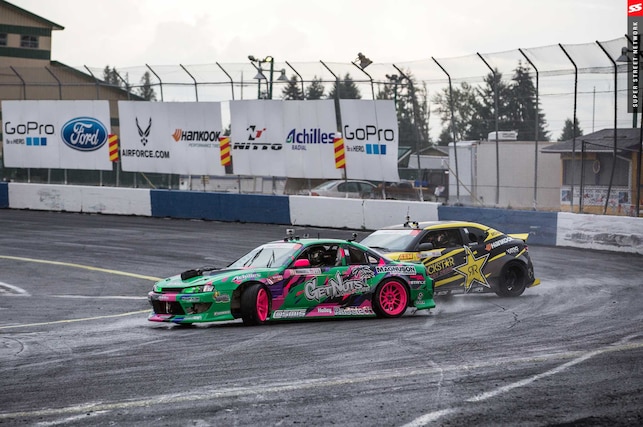