Porsche has been a dominant force in sports car racing for generations, and it was no different going into the 2016 season-opening Rolex 24 at Daytona.

It was rechristened as the IMSA WeatherTech SportsCar Championship for 2016, and there was every reason to think that Porsche would once again be the team to beat.

Porsche-powered entries have been winners throughout the history of the enduro, garnering 22 overall wins and 76 class titles, including an incredible uninterrupted run of overall victories between 1977 and 1987. Yes, there was a Ferrari that we still call the "Daytona," but the Italians have only won the 24-hour race overall twice, in 1967 and 1998. 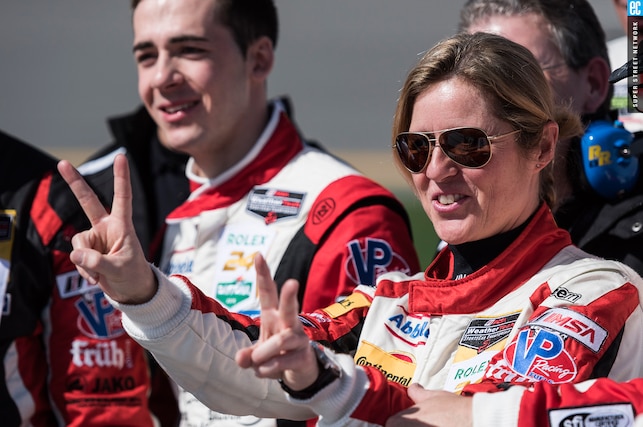 The cars from Zuffenhausen have dominated the Rolex 24 in ways they haven't matched even at their spiritual home, Le Mans, leaving us with such lasting images as the sweep of the stark, white, long-tailed 907s in 1967; the brilliant Gulf-Wyer high-tailed 917s of Rodriguez and Siffert; the iconic Brumos RSR of Gregg and Haywood in 1973, a lowly 911 Carrera competing as a prototype and beating all comers; and Brumos again in 2009 with David Donohue at the wheel of a Porsche-powered Daytona Prototype, the sentimental favorite in a final salute to the great Bob Snodgrass of Brumos, keeper of the sports car flame for so many years.

The imagery of Porsche at Daytona is as unrelenting as its competitive prowess. Who can forget the battle-worn 935s of the '70s? That was endurance racing at its scrapping best—duct tape and baling wire and the hot exhaust of the thumping turbo flat-six hanging improbably off the back of insane Funny Cars built up from 911 tubs, Rahal and Joest and characters like the Whittington brothers and John Paul, Sr. In 1978, Porsches swept 14 of the top 15 finishing positions. The 935 was a tough act to follow, but Norbert Singer's brilliant Le Mans missile, the 956, begat the IMSA-friendly 962, a car that seemed made for the high-speed banking of Daytona. The Lowenbrau 962s of Al Holbert, with an astonishing supporting cast, were just part of another period of dominance. Derek Bell, Big Al, Little Al Unser, "Tough Tony" AJ Foyt, "Brilliant Bob" Wolleck, and Hurley Haywood were among the drivers in the 962 podium sweeps of the 1980s. When there was finally a drought, during the World Sports Car era of the 1990s, Porsche even managed to slip in a win with the Kremer Brothers. And, of course, who could forget the remarkable victory by the blue no. 66 of Bergmeister/Bernhard/Schrom/Buckler, when two GT3s improbably found the overall podium in a true endurance contest.

Given parent company Volkswagen's developing emissions-gaming scandal, it might have been understandable if Porsche failed to show up for the 2016 edition of the Rolex 24 at Daytona with a full-blown effort.

Instead, Porsche blew into the Florida town with a seriously updated RSR in the GTLM category and an all-new GT3 R in the GTD category, and each took a class podium finish. What's more, the factory-backed CORE Autosport team was dominant in the GTLM category, setting the top two times for the entire field—including the prototypes—on their Michelin wet tires in the rain-drenched qualifying sessions. In a thrilling finish, Le Mans winner Earl Bamber of New Zealand, in the GT3 RSR he'd shared with Frédéric Makowiecki and Michael Christansen, lost the top step of the GTLM podium to the two factory Corvettes in the final minutes of the race, the RSR scoring a strong third place a mere 13 seconds adrift of Oliver Gavin's and Antonio Garcia's dueling Corvettes. 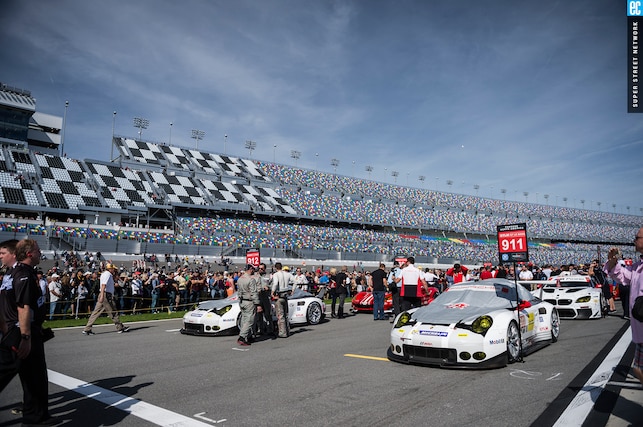 Meanwhile, Black Swan Racing's Nicky Catsburg narrowly missed catching the GTD-winning Magnus Racing R8, which ran out of fuel halfway through the cool-down lap. For icing on its Daytona cake, Porsche also introduced its all-new Cayman GT4 ClubSport model to the GS category of the supporting Continental Tire SportsCar Challenge, and that car took a worthy second place on the podium as well. Bottom line: Two all-new cars and one substantially updated racer from Porsche appeared at Daytona, and the marque earned three hard-fought podiums.

This year didn't start out like it was shaping up to be another year of Porsche sports car dominance. It was almost as if other manufacturers sensed that this might be their year to challenge the dominant brand, especially after the early stumble at Daytona 2015 when the factory cars suffered a fluke accident that took the team out of contention. Rules changes meant that Porsche would come to Daytona with a much-modified evolution of last year's GT3 RSR. Newcomer Ford chose Daytona to introduce its radical new GT, BMW brought a new M6 GTLM car that pushed the rules to the edge, the Corvette team appeared to take a more evolutionary approach to its always first-class effort, while Ferrari introduced its turbocharged 488 race variant.

This year's GTD category would finally conform to international GT3 standards, so Porsche retired the Cup car–derived GT America in favor of a brand-new machine to meet challengers from Audi, Lamborghini, Ferrari, and BMW. The new GT3 R appears to be much more closely related to its GTLM brethren, its longer wheelbase and more radical aerodynamics being the first hints that this is no Cup car derivative. In fact, the GT3 R is rated at 500 hp, 30 more than the rating of the GTE/GTLM car, which gains its advantage over the GTD through the GTLM class' greater leeway in aerodynamics and tires. However, it takes a trained eye to tell the difference between the two cars, as the GTD car now has a larger and more sophisticated rear wing, a significant and efficient rear diffuser, and front splitter and ducting looking much like its GTLM sibling.

As the lone American in the lineup of Porsche "works" drivers, Patrick Long assisted with the development of the new GT3 R GTD car for the 2016 season. "It was clear to me from the beginning that this car was a big step forward in a lot of areas," Long told us. "Mainly in aerodynamic behavior—a lot more downforce without giving away drag, which is just a great evolution and a great job by the engineering staff."

Long also sees the GT3 R's 500hp DFI motor as a significant step forward for Porsche, which had always relied on the evergreen flat-six's high-winding horsepower to make up for its displacement disadvantage over the larger V-8- and V-10-powered competition in the GTD category. "I can do things in the car with more power, more usable rev range. I don't have to shift as often; I can manipulate the attitude of the car with my right foot on the accelerator; I have a lot more usable power down low. It actually will challenge traction when you have that additional torque."

While the Rolex 24 at Daytona has often seen fields filled by private Porsche entries, the 2016 edition's GTD category saw both defections and additions to Porsche's strength. The leading privateer Porsche team for the WeatherTech SportsCar Championship again appears to be the two-car effort by Porsche stalwart and 10-time Sebring winner Alex Job Racing, whose no. 22 WeatherTech and no. 23 Team Seattle cars featured strong driver lineups, but it was the 2015 Petit Le Mans-winning no. 73 Park Place Motorsports GT3 R that gridded on the GTD pole during the rain-soaked qualifying session on the Thursday before the race. Nürburgring VLN endurance experts Frikadelli Racing Team added to the Porsche presence in GTD, bringing its beautiful red and white Fruh Kolsch Bier-liveried No. 30 GT3 R to Florida from Germany. A new entry completed the Porsche GTD field; Black Swan Racing has returned to IMSA competition after many years spent racing the Mercedes-Benz SLS and Dodge Vipers in the Pirelli World Challenge.

The Black Swan squad had a lot of catching up to do but were given a leg up by the addition of Porsche factory driver Patrick Long to its regular season lineup of team principal Tim Pappas and Dutchman Nicky Catsburg (also joined by veteran Andy Pilgrim for the enduros). Long's experience developing the GT3 R helped the Black Swan group get up to speed along with the other Porsche teams at Daytona. "That's just something unique about my Daytona adventure," Long said. "It was quickly apparent to me that the team had a very, very capable infrastructure, a lot of smart people, but a lot of them hadn't worked on a Porsche before, or hadn't worked on a Porsche in a while, and so we had a lot to get through in the pre-test, and a lot to get through between the Roar and the race."

In the end, preparation and strategy paid off for the Black Swan team, which narrowly missed victory in the GTD category by a mere 3 seconds to the Magnus Racing Audi R8 V10, which somehow managed to stretch its fuel to the finish line. Perhaps it was some consolation that Patrick Long's 2015 Dempsey-Proton Racing Porsche teammate, Marco Seefried, picked up a Rolex as part of the winning Audi's driver battery. Said Long of his own team's performance, "It was just a great execution of a 24-hour race, and it was apparent that at certain points in the race there were other manufacturers that could be a second or a second and a half faster per lap, but they didn't put a race together, so that's the good and the bad of long races … and why I think Porsche and its teams do really well."