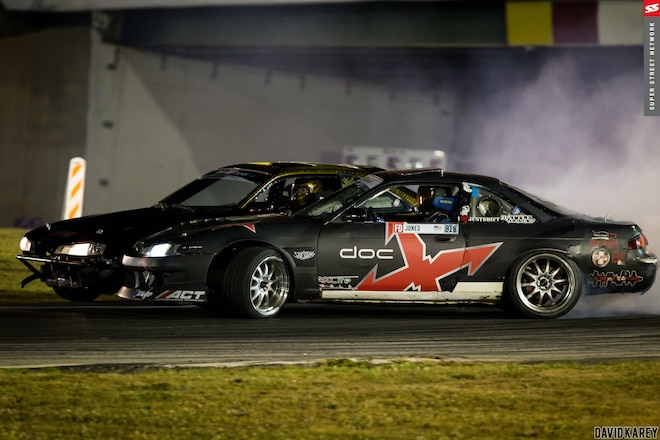 We have high hopes for Formula D's Pro2 championship, particularly considering the epic-ness of its 2015 run. In between the driving artistry of Andy Gray in his Mark II and the brute force of eventual season champ Alex Heilbrunn in his blown V8 E46, plus the rest of the cast of young and hungry hot shoes, last year's crop of talent kept us on the edge of our seats for all four rounds. So when it was announced the 2016 Pro2 championship would begin at Road Atlanta, we knew drama would ensue - but we would've never guessed in a million years things would go down the way they did. 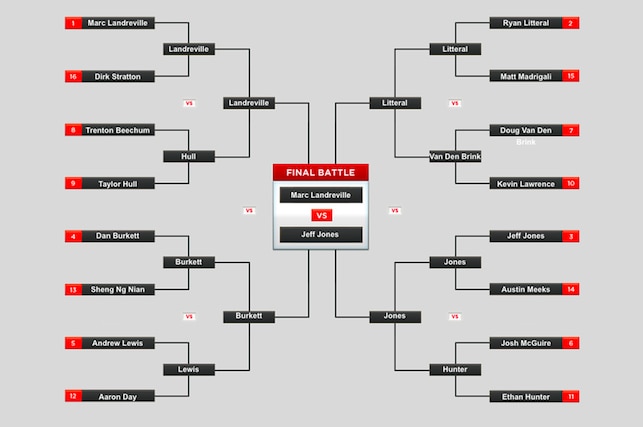 We can say pretty unequivocally there were a lot of jitters on display, primarily from rookie pilots like Midwest Drift Union champ Dirk Stratton in his Drift 'Vette and Sheng Ng Nian in his Chaser out of Singapore (there were others, too). Neither made it out of the round of 16 in tandem eliminations; both probably wished they had another chance to put together a pair of not-so-erratic runs (in the case of Nian, he got a One More Time (OMT) tiebreaker against our boy RAD Dan Burkett in the RAD Industries Mk4 Supra but still couldn't keep it together). 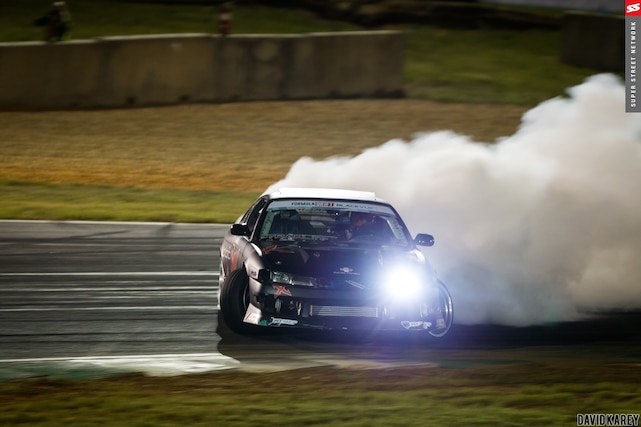 Burkett was one of a quartet of seasoned drivers to mount a serious run in Braselton, Ga., all the way to the semifinals, a group which also included Marc Landreville in the Perry Performance Nissan S14, Ryan Litteral in his 240, and Jeff Jones in the DOC S14. Before Dan made the Final 4, however, he had to slide past the Silvia of series freshman Andrew Lewis, and did so in remarkable style, putting down a killer chase lap that got us super pumped. For his part Landreville knocked off Stratton before facing Taylor Hull's V8 240SX, the pair driving to a OMT before Marc took the victory. 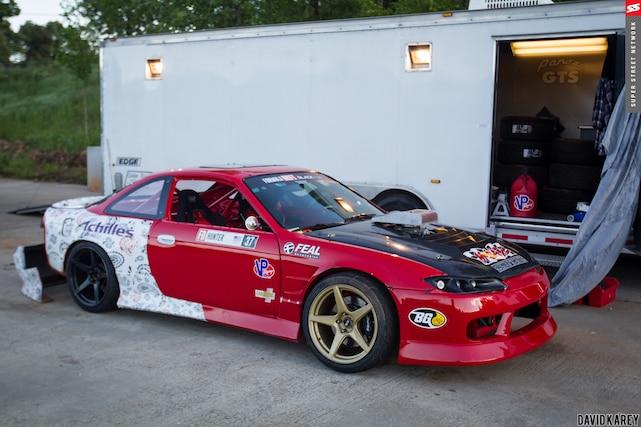 On the other side of the bracket, Litteral took advantage of a flub by Golden Gate Drift champ and Top 16 opponent Matt Madrigali in his LS3 S-chassis to advance, and then dispatched the Mustang driven by Doug Van Den Brink in Great 8. Jones had an easy Top-16 win against Austin Meeks in his S14 before moving on to challenge and ultimately defeat Ethan Hunter in his S chassis. 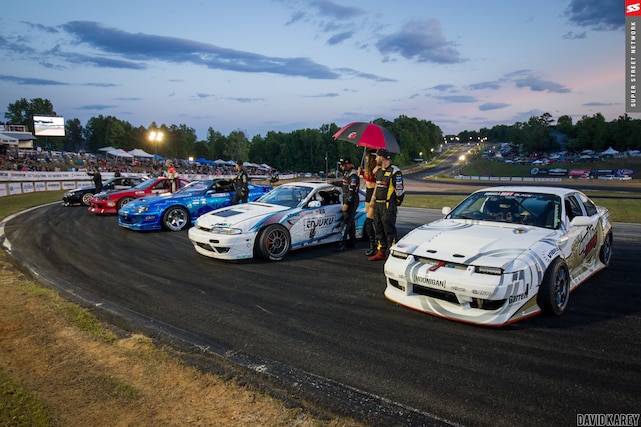 The weird and wild competition seemed to come to a culmination in the Final 4. First up were Burkett and Landreville, with Landreville in the lead to start; as they came down the hill and then initiated, both cars were traveling sideways at different rates of speed, with the RAD Supra clearly moving faster, closing the gap, and ultimately colliding with Landreville's S14. It didn't seem like all that forceful a hit, but Marc needed time to assess and try to fix his vehicle, and since the judges deemed Dan at fault Landreville had an extended period (more than the 5-minute "competition timeout") to try to return to the track.

As Landreville was in the pits, Litteral and Jones went out for their pair, which turned into a dogfight, especially in Ryan's chase lap. The cars made contact in the horseshoe but Jeff seemed surprisingly unfazed, both cars continuing to finish the lap like bumper-car gladiators. The crowd loved it. 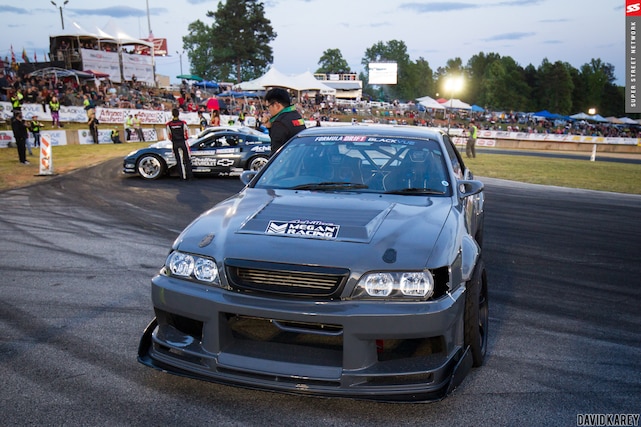 As it turns out that would be the final tandem run of the night. Jones advanced to the final, but Landreville and Burkett were unable to close out their semifinal match because Marc's car was reportedly damaged beyond repair. Since Burkett was faulted with causing said damage, Landreville advanced to the event Final, but without a running car would have to settle for second place. And as if the night was not weird enough, when Jeff Jones went out for his bye pass/victory lap, he ended up nailing the final inner clipping point and apparently exploding the front left corner of his car (we couldn't tell if it was wheel or suspension or both). 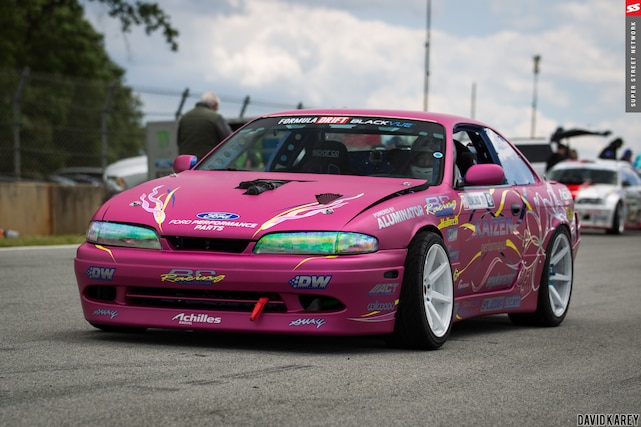 Jeff still earned the W, Landreville second place, and Litteral third for out-qualifying Burkett; in fact, the top four qualifiers of the event wound up going all the way to the Final 4. It bears pointing out, we now understand why there was such an outcry over Formula D doing away with the so-called "consolation" round a few years back, the tandem that used to determine who would sit in third place. Had that still been a factor, Burkett would've at least had a shot at contesting third place and the fans would've gotten more than just a single car doing a parade lap to end the night.

It was a weird way to end Round 1, and we hope the rest of the season plays out a little more evenly. Speaking of, the next round of the Pro2 season is set for June 3rd and 4th, in conjunction with the Formula DRIFT Pro competition, at Orlando Speed World in Florida. 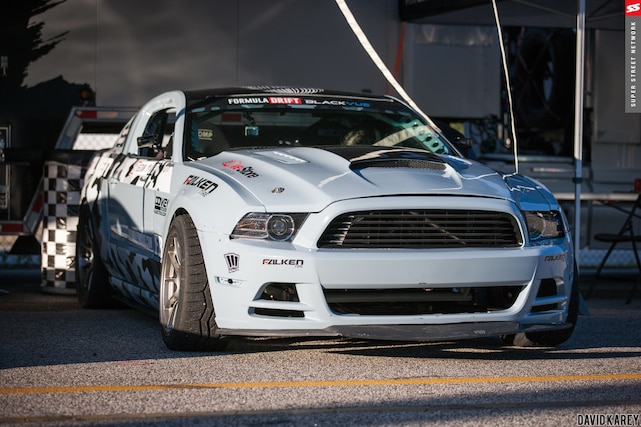 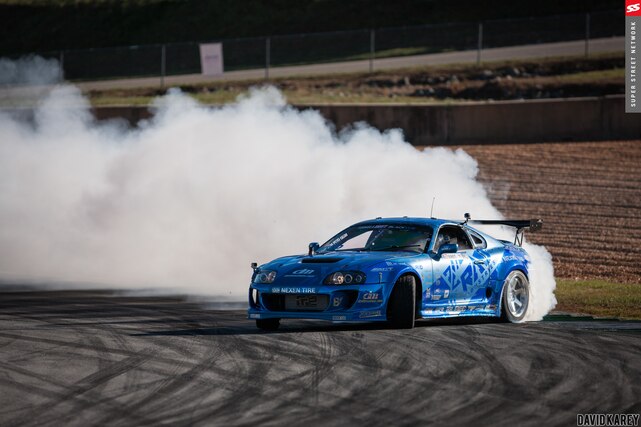 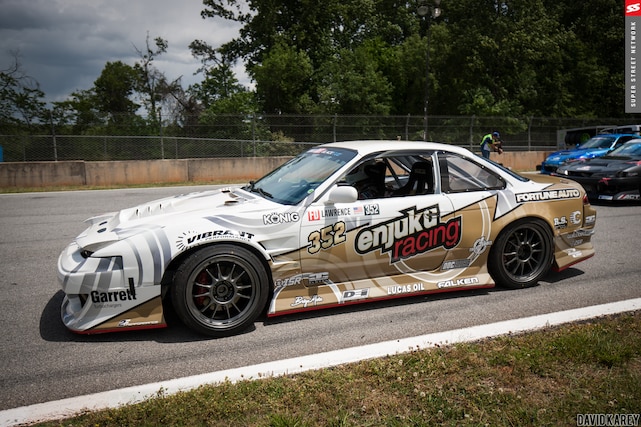 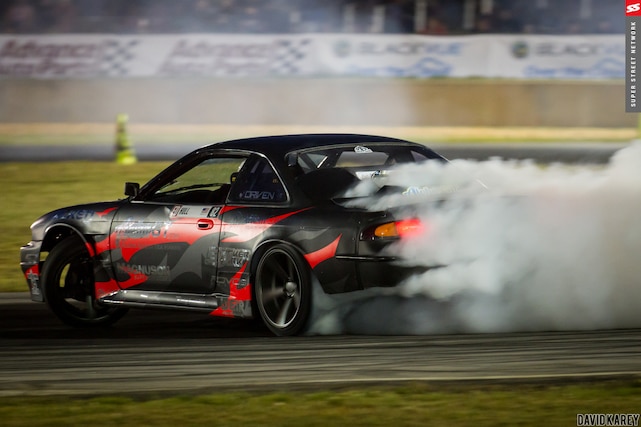 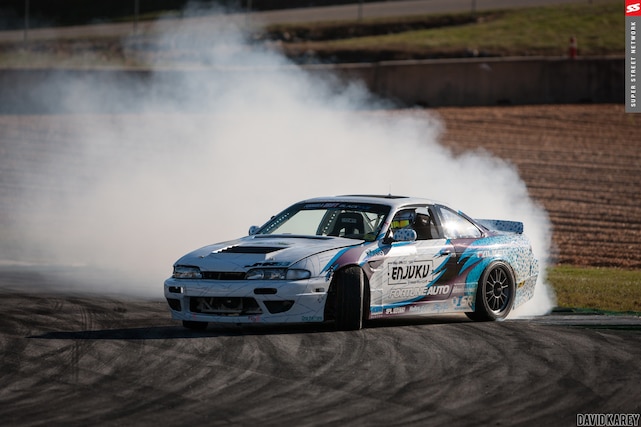