After a heat wave in '15, the World Time Attack Challenge returned to cooler weather and an open slot for a new champion. Yet again, it's setting the pace! 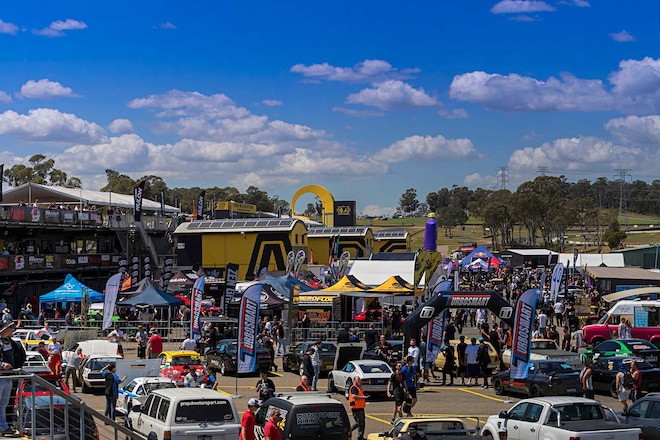 Sydney Motorsport Park is becoming the place where the planet's fastest Time Attack cars make a name for themselves. The backdrop to the World Time Attack Challenge since '08—when it launched as the Superlap Battle and the Japanese entries were giving the locals a drubbing in the podiums—it's since grown to become a stage for local talent, world-beating lap times, and genuine feats of engineering. 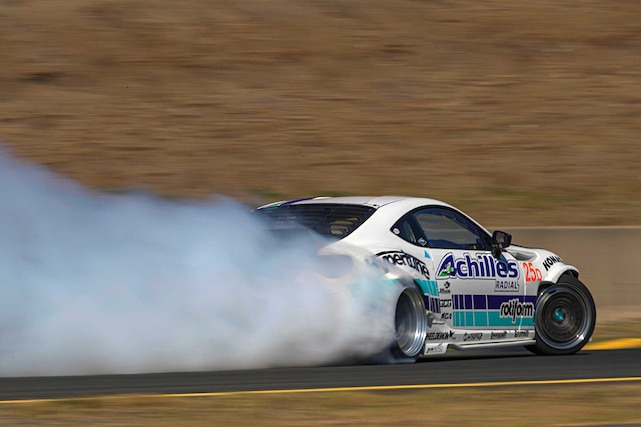 2016 was always going to be special, a feeling you could sense in the pits, as the first sessions of the two-day event got under way. Significantly cooler weather than last year's off-season heat wave meant the cars could make full power, and two years of development work could show its potential. And with three-time-champion Tilton Interiors retiring its seemingly unbeatable Evo 9, the Pro class was open to a new winner, and nobody was holding back. 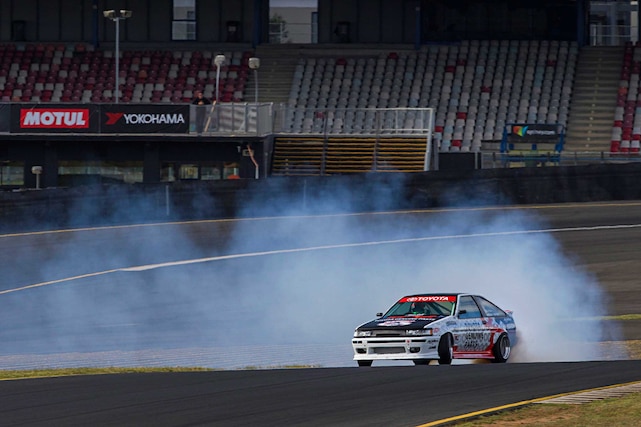 Though the standards are incredible, WTAC remains a grassroots event, with strict controls over the cars that enter. Even in the two Pro classes, entrants have to retain the original monocoque, suspension pickups, an unmodified firewall, and full-length dashboard. Everything on the grid is developed from a production car, running road-legal Advan control tires and burning either E85 or unleaded fuel. Fast laps are a combined effort of driver talent and innovative development work, and fractions of a second separate the top performers.

With Tilton Interiors out of the running, the Pro class was even harder fought than usual this time around and almost impossible to call. Home to the most aggressive aero, weapons-grade chassis and powertrain engineering, and often with professional racing drivers at the wheel, it's here where records fall and the event's quickest times are set. Lower temperatures had a marked effect, highlighting not only the last 12 months of development work, but the year before, too. The three fastest cars all beat the '15 record, setting times quick enough to keep up with open-wheeled race cars on slicks on the same circuit.

But the class win went to Brisbane-based MCA Suspensions, with V-8 Supercar Championship driver Tim Slade bringing the "Hammerhead" S13 Silvia across the line in 1.22.1920. Not only is that a second and a half faster than Tilton's best time, but it's second only to Nico Hulkenberg's A1GP car as the fastest lap of Sydney Motorsport Park. Signs of how far the limits are being pushed. 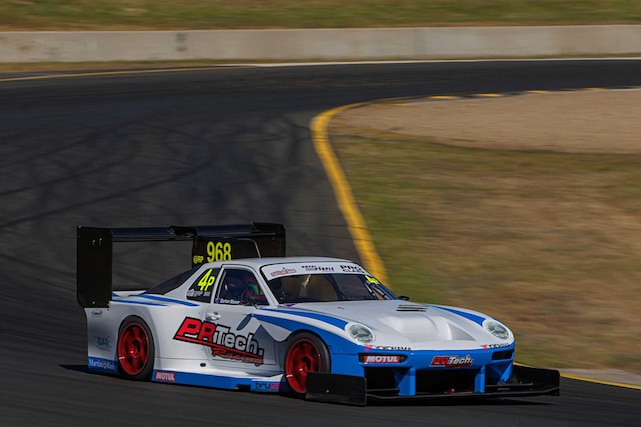 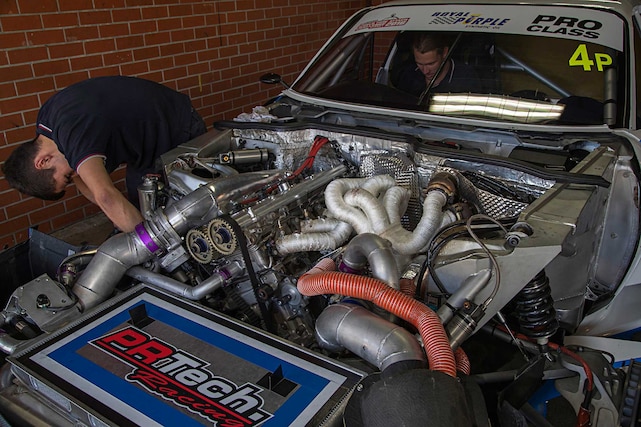 Porsche specialist PR Tech Racing is a relative newcomer, the RP 968 getting its first outing at the '15 event, narrowly missing a place on the Pro class podium despite almost no track testing. It's an incredible piece of engineering, with an aggressive aero kit designed by ex-Toyota and Caterham F1 team engineer Sammy Diasinos, and with the original 3.0L turbocharged engine featuring a rotated head to separate exhaust and intake manifolds for better efficiency. An extra year of development work paid off; Endurance GT driver Barton Mawer took a second-place finish at 1:23.0380, shaving almost 4 seconds off its best time in '15. One to watch. 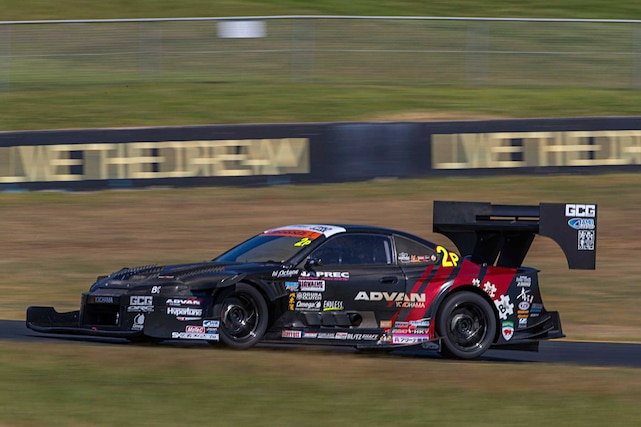 That left the Scorch Racing S15 of Under Suzuki in third place. He is a dentist by trade, and the car took hours to build near his home in Japan; it has put in consistently strong performances at WTAC every year since it began. He came close; 1:23.1310 was more than 4 seconds faster than the next-fastest car in the Pro class, but not quite enough to keep PR Tech Racing out of second place. 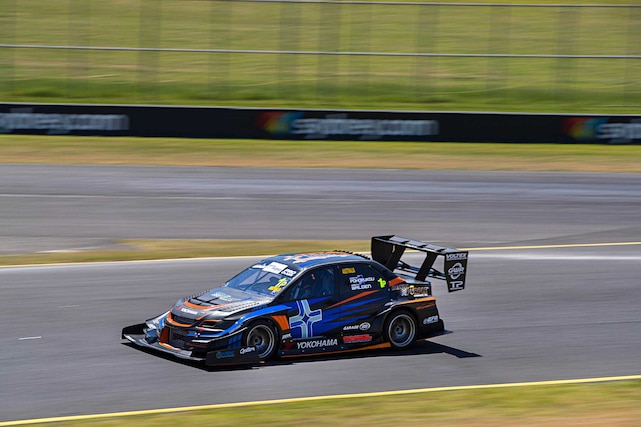 Photo 22/43   |   While not competing, former record holder Tilton Interior Evo made demo laps for the fans. We suspect it may return this year to give MCA a run for its money. 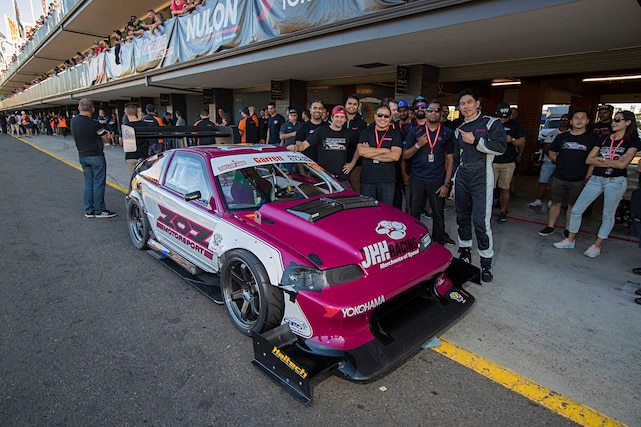 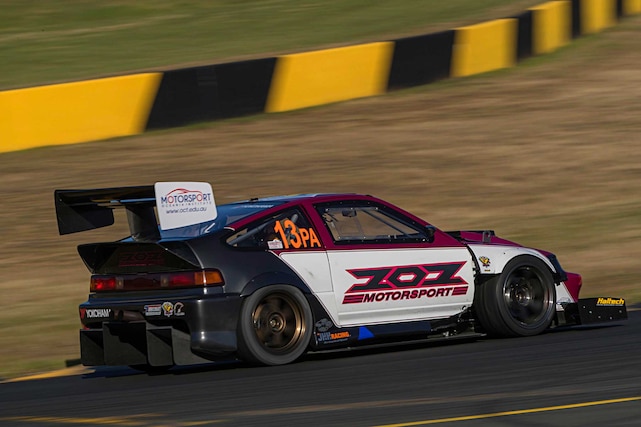 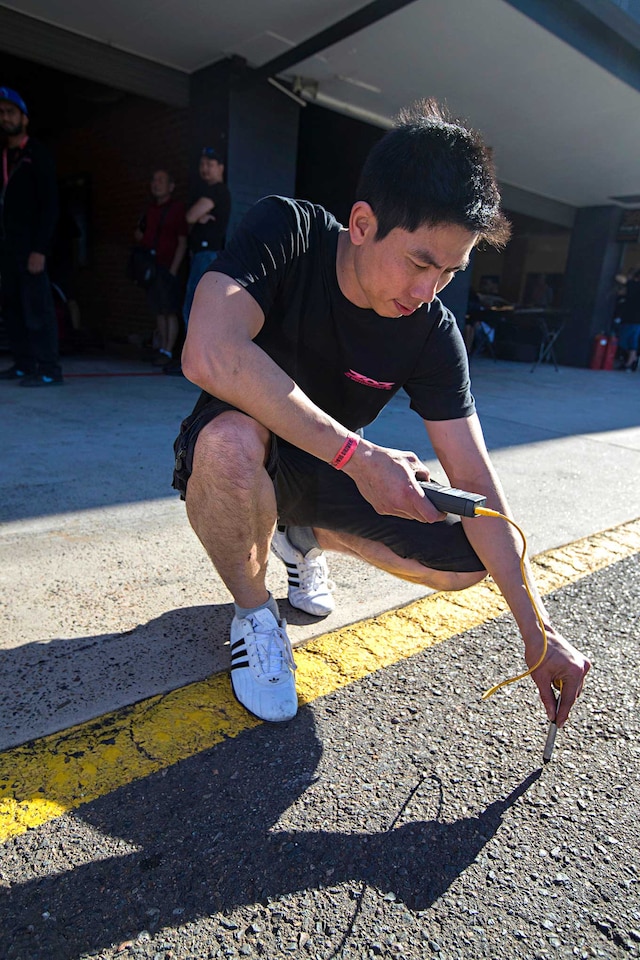 It's not only the big-budget builds that perform well; there's never a shortage of giant killing to keep things interesting. The "Mighty Mouse" Honda CRX of 101 Motorsport has worked its way up the Pro Am class since its first event in '11. It's still front-wheel drive and runs the smallest tires on the grid, but the combination of low and perfectly distributed weight, Cawthorne Composites aero, and bespoke chassis parts designed by McLaren F1's Barry Lock mean it can take corners faster than the record setters. That formula has lost none of its potency. With a lap of 1:27.61, the CRX won its shootout, set a new front-wheel-drive record, and was the fifth-fastest car overall at the event, only narrowly missing out on a class win to the all-carbon Evo 9 of PMQ Design—the sort of David and Goliath battle that makes for incredible spectating. 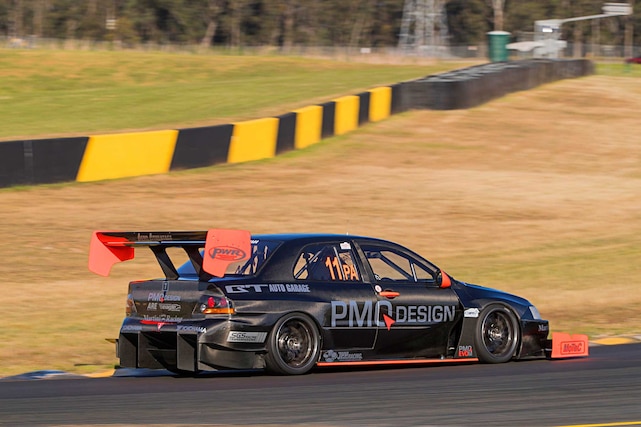 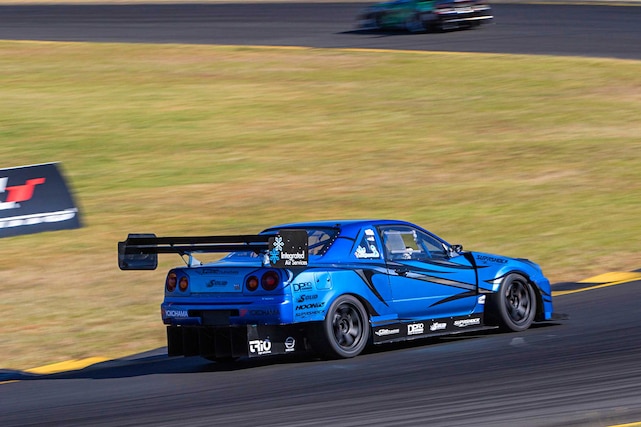 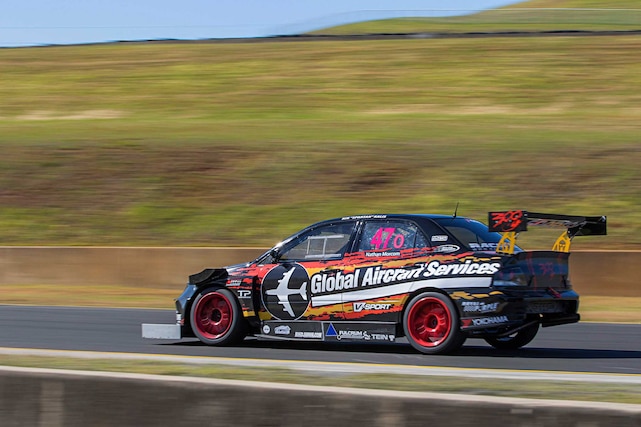 There's no such thing as a soft option at WTAC. Open Class might lack the record-breaking times of the Pros, but it gave plenty of edge-of-seat action and one of the closest finishes with only 1 second separating the three fastest cars. Driven by Matt Longhurst, the R34 of Integrated Motorsports spent most of the weekend looking like it would take the top spot on the podium, but a tiny mistake in the final shootout handed a 0.2-second victory to Nathan Morcom in the Royal Purple/Spartan Evo 9. Both were setting times fast enough to keep up with cars in the Pro Am class.

Last year's Open Class winner, JDM Yard, returned to defend its title with one of only two front-wheel-drive cars in the class. Looking almost unchanged, the EG Honda Civic now has a Hollinger sequential gearbox, full MoTeC management, and redesigned Hardrace suspension parts to make more of its Topstage Composites aero and 600 bhp. Aussie rally driver Adam Casmiri put in a small improvement on his '15 time but slipped to sixth place despite finishing less than a second and a half behind Nathan Morcom.

So '16 wrapped having set the bar even higher for '17, and wheels are in motion for another 12 months of development work as teams look to push the boundaries further. Newcomer or established team, it's an event where today's legends can quickly become yesterday's news, and there's no room to stand still.

"WTAC seemed attractive as it was fairly free on rules," says Murray Cootes, former rally driver, founder of MCA Suspensions, and the driving force behind this year's event-winning car. "I like to be able to design something for what is, rather than working in a little box. It's capitalized on all the stuff I've learned over the years, putting all the mechanical features that make a race car into one package, instead of getting tied into tight rules of categories." 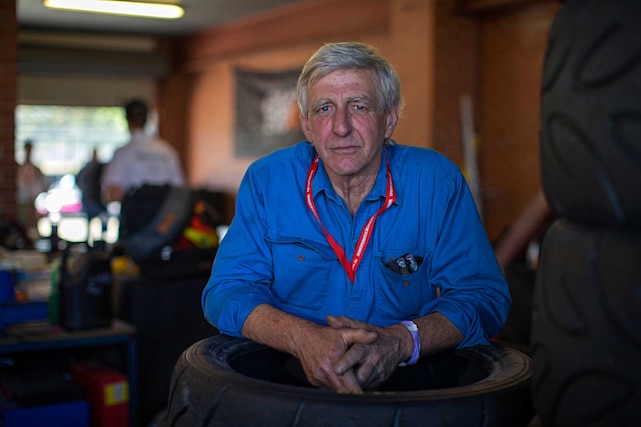 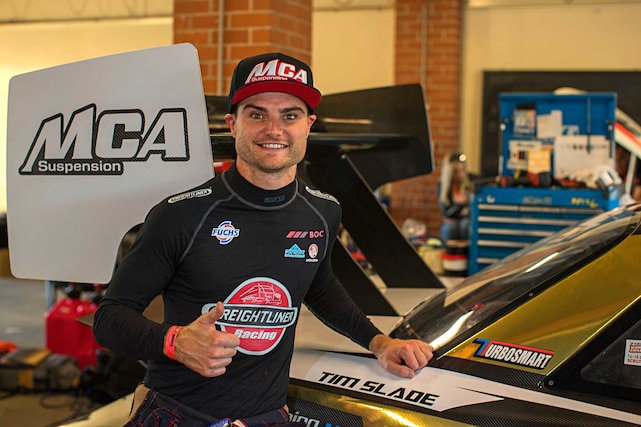 It's taken six years of development work to get here. Named after its experimental front-end aero, the "Hammerhead" started as a stock S13 Silvia, evolving into an 840-bhp professional racer with aerodynamics designed by ex-McLaren F1 engineer Barry Lock. The learning curve was steep; Porsche Le Mans driver Earl Bamber took it from tenth place to third between its first two years. Driven by V8 Supercars racers Shane van Gisbergen and Tim Slade, it hasn't left the podium since. 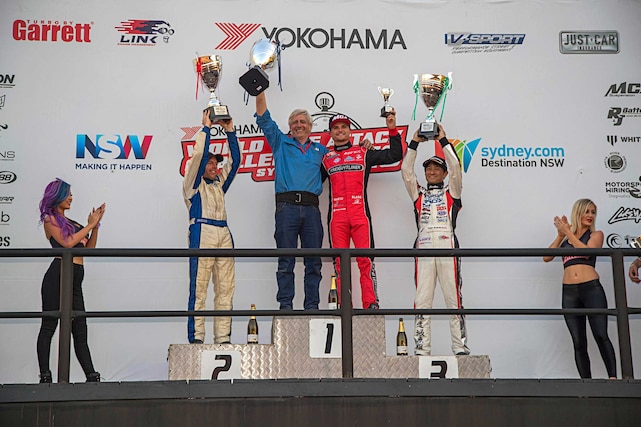 "The temperatures were a bit of a handbrake, but the development has showed up this year with better conditions," Murray says. "But I didn't think that time was in this car. It's something we joked about in the workshop; that's quicker than a Formula Three or Formula Holden time, and it's on road-legal tires." 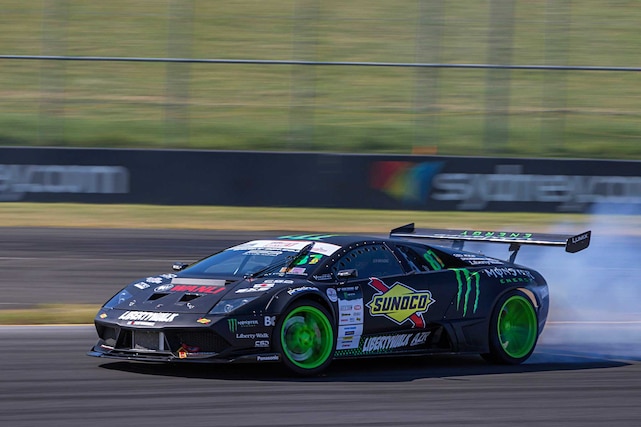 Not just Time Attack anymore, WTAC in Australia has become one of the world's largest spectacles for motorsport enthusiasts. Over the course of two days, more than 25,000 people walked through Sydney Motorsports Park, and the livestream was viewed by more than half a million people. Sounds like we're overdue for a trip Down Under! 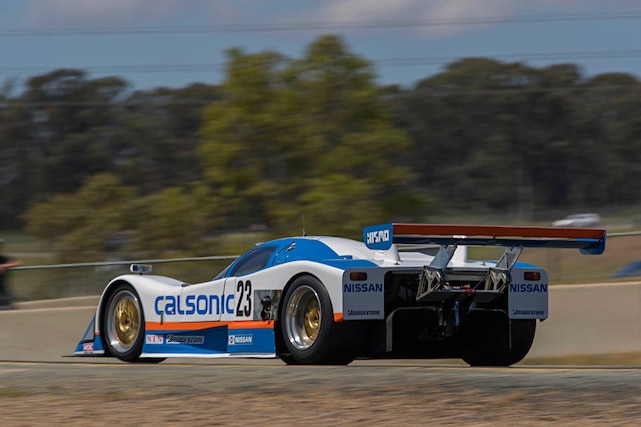 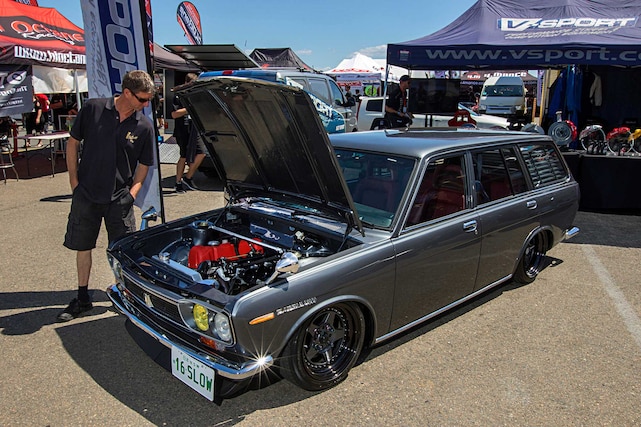 The '16 WTAC event was also host to a car show with more than 450 vehicles on display. Here's the outright winner, John Healey's Datsun 1600 Wagon with its ITB'd L18, Air Lift suspension, and custom gun-metallic paint.