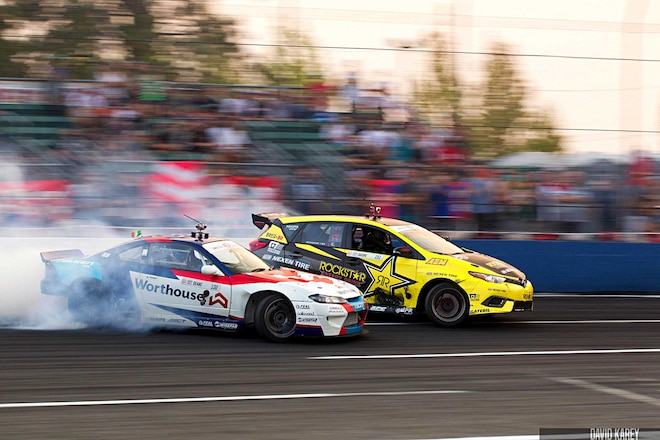 Since Irishman James Deane made his big debut with the 2JZ-powered Worthouse S15 at Round 1 of the 2017 Formula DRIFT Pro Championship in April, competitors have been desperately looking for the driver's vulnerabilities - for the proverbial "chink in his armor," as a few have articulated. For at least half of the season, it looked like his weakness could be courses set at banked ovals, effectively the only rounds he didn't run away with; the wins on the Long Beach street circuit and Round 3: Road Atlanta road course are in stark contrast to the rounds at Orlando Speed World and Wall Stadium, where Deane - who is getting his first taste of banked ovals this year - seemed almost human. But that changed at Round 6: Evergreen Speedway in Monroe, Wash., where Deane got a huge monkey off his back by not simply winning the oval-based event, but doing so as the number-one qualifier - what they call in racing a "perfect event." 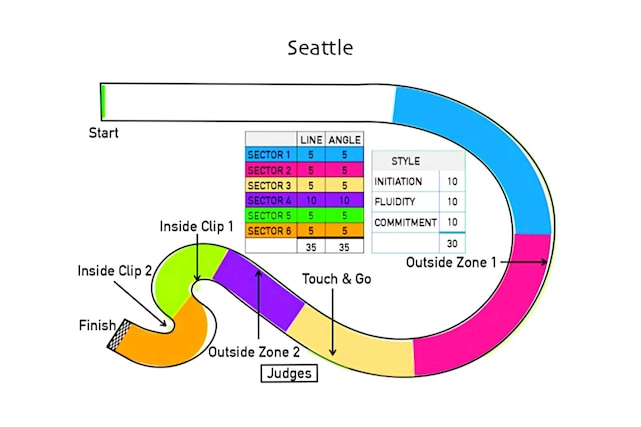 We had 26 pilots for 32 slots in the first run of tandem eliminations, which meant the top six qualifiers - Deane, Ryan Tuerck in the Gumout Nameless Performance 86, Odi Bakchis in the Falken Tires S14, Mike Essa in the Essa Autosport E46, Kristaps Bluss in the HGK Motorsports E46, and Vaughn Gittin, Jr., in the Monster Energy Nitto Mustang RTR - all got to skip Top 32. For Deane it was his second straight top qualifier, doing the same at Round 5: Autodrome St-Eustache in Canada just a few weeks prior. 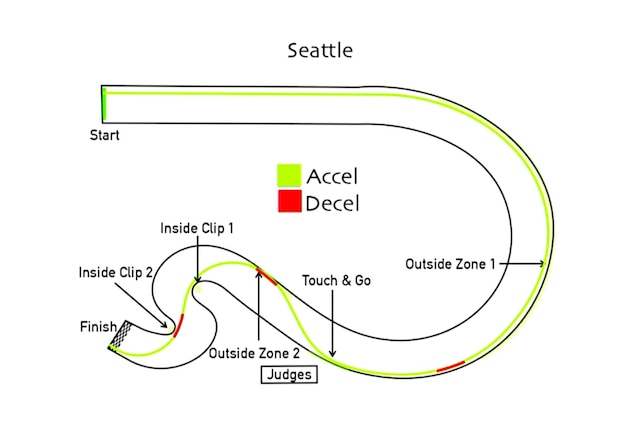 If it seemed like this was a rough round, all the car-to-car contact and One-More-Time (OMT) tiebreakers - seven total - certainly proved that point. It didn't help that several teammates were pitted against one another, which admittedly was the luck of the draw, but a couple drivers literally left it all on the track, like Nate Hamilton. In his Top-32 chase of Justin Pawlak in the Roush Performance Mustang, Hamilton cut through the pony car's smoke in the Enjuku Racing S13.4 only to find the wall at the end of the Zone 1 bank (the driver emerged OK, his car not so much). Our boy RAD Dan Burkett also gave the bank barrier some wall love in his RAD Industries Mk4 Supra following Deane in Top 16, a harsh come down from scoring his first Top 32 win. If we know Dan, though (and we do), he'll bounce back and be ready for Texas in no time flat. 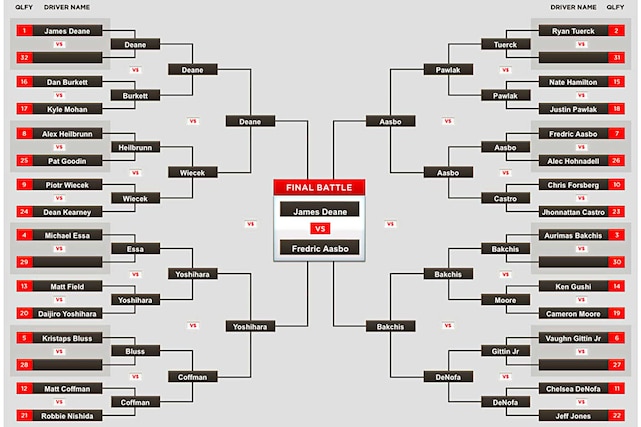 The upsets kept coming in Top 16, beginning with Dai's win over 2013 champion Essa, again after a One More Time; in the OMT, with Yoshihara in the lead, Essa was all over the place through the course's Power Alley, missing Zone 2 completely in a bid to close the gap heading into Clip 1. Matt Coffman in the Coffman Racing S13 had a remarkable win over Bluss after the Latvian driver sacrificed a ton of angle on the bank and past Zone 2 during the OMT in an effort to keep up with Coffman. Pawlak beat Tuerck after the 86 came in way too hot at Clip 1 and knocked into the Mustang, contact attributed to Tuerck. And Chelsea DeNofa in the BC Racing Mustang RTR knocked off his boss, Gittin, after judges saw JR miss the Touch and Go and not go as deep into Zone 2 in his lead lap, while DeNofa was far more aggressive from the chase position. 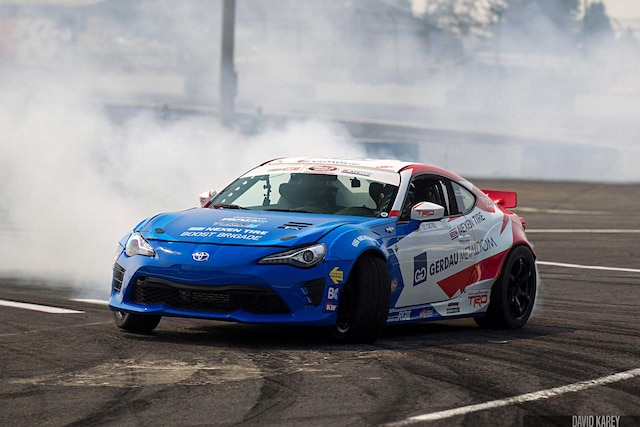 Wiecek beat Alex Heilbrunn in the IMR BMW, and Bakchis got by Moore. Making the Top-16 highlight reel was the Nexen and Papadakis Racing teammate battle between Aasbo and Castro; in it, with the Norwegian Hammer in the lead, Castro placed his 86 right in the pocket, going door to door with Aasbo - perhaps a little too aggressive, as Castro slid right into Aasbo's side, sending both cars into a spin coming off the Zone 1 bank. With Castro at fault, Aasbo got the green light to advance to the Great 8. 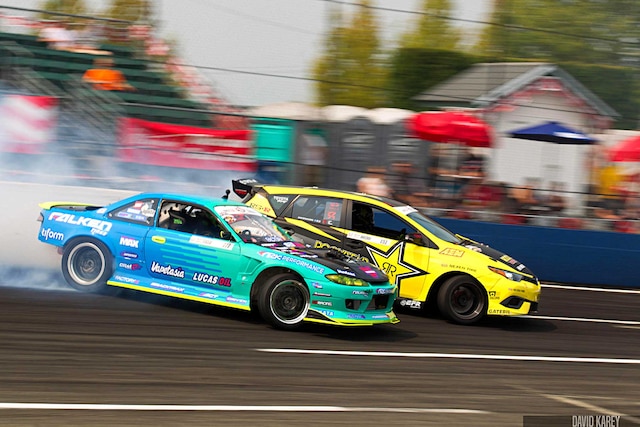 The Great 8 quarterfinals witnessed Deane beat Worthouse kin Wiecek and Dai continue his Goliath-slaying ways by taking out the higher qualifying Coffman, who while chasing went super wide around Clip 1. In the other half of the bracket, Pawlak's rear-end broke toward the end of his chase of Aasbo, causing the Mustang to fall out of drift and handing the win to Fredric, while Odi had the advantage against DeNofa after Chelsea's Mustang on the chase slid into Bakchis' S-chassis at Zone 2, causing both cars to stop. DeNofa was found at fault and Odi stamped his ticket to the Final 4.

The semifinals had one more teammate battle, the showdown between Falken pilots Deane and Yoshihara; the first laps were too close to call, so the pair went to OMT. The decider in the extra laps was Deane's better chase, sending him to the finals. In the Aasbo-Bakchis match, Odi over-rotated around Clip 2, netting him an incomplete score and Fredric a one-way ticket to the main event. 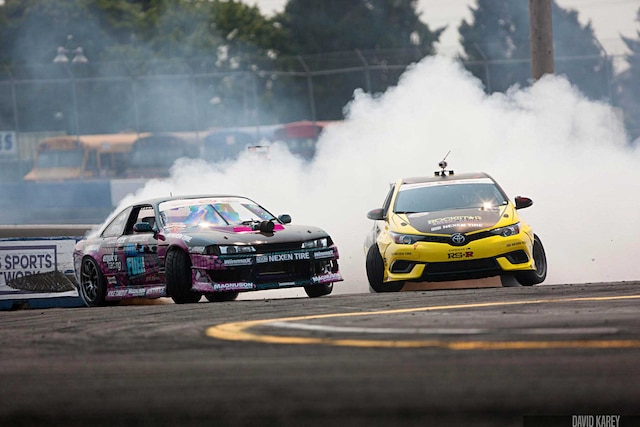 The same two who went to the finale in Canada weeks earlier faced off again at Evergreen Speedway, and as one might expect it was a clash of titans. Judges couldn't nail down a clear winner after the first laps, so they asked for a One More Time (which we haven't seen in a final in forever). The bonus laps went to Deane in what we thought was an evenly matched back-and-forth battle, and thus he picked up his third event victory of the 2017 FD season, while Aasbo came home second and Bakchis picked up third for qualifying higher than Yoshihara. 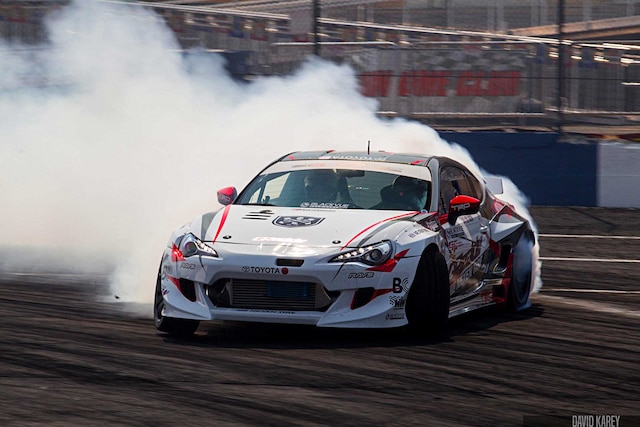 Deane's stellar year is drawing comparisons to Vaughn Gittin, Jr.'s remarkable title run in 2010 (six podiums out of seven rounds, with two event wins) and Daigo Saito's gangbuster road to the championship in 2012 (four podiums out of seven rounds, with two event wins). About the only driver able to keep up these days is Aasbo, who is currently 50 points behind Deane in the drivers table with two rounds left to go in the season and 214 points still up for grabs. Mathematically everyone down to seventh place in points has a (long) shot, but realistically the 2017 FD title chase at this point is a two-horse race. 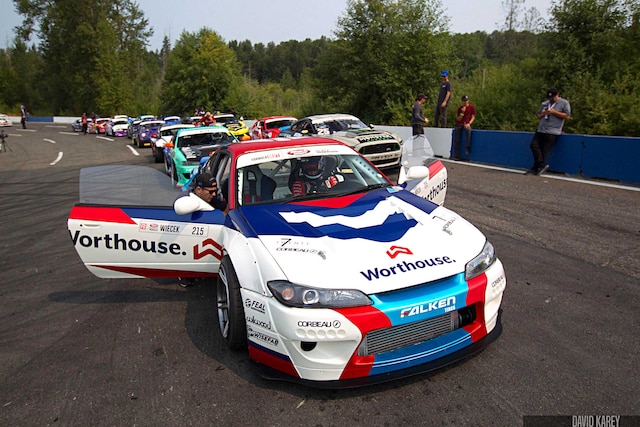 Will James Deane lock up the championship in Texas? We'll just have to wait and see - Formula DRIFT returns to Texas Motor Speedway September 8 and 9. If you can't make it to Round 7, there's always the Formula DRIFT live stream and alternately the Network A version of the same live stream (sometimes more reliable than FD's). You can also download the Formula D app from your app store and in it is live stream functionality as well.