The fast get faster and new talent emerges 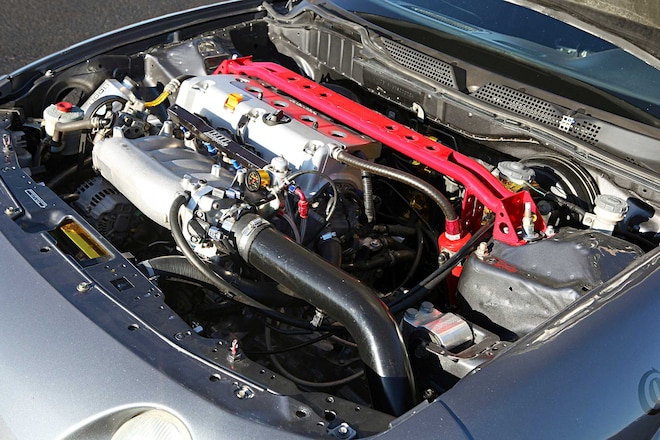 In part one of our 2017 FF Battle presented by Continental Tire coverage, we recapped the event's Street Class competitors and their final lap times and standings. This time around it's the Race Class, which involves more developed vehicles, more experienced drivers, and in some cases, hired guns (non-professional but highly skilled drivers) to eek out the fastest possible lap time at Southern California's Streets of Willow Springs road course in Rosamond. By splitting the classes apart we avoided traffic jams, major on-track safety concerns, and in turn, created a far more competitive day of racing for both groups.

Each of the cars in this year's FF Battle were required to retain factory suspension points, remain full chassis, and required to have their original dash and windows intact, along with some other guidelines to keep everyone on the same page. Aero and power adders were unlimited, and to keep everyone as even as possible, each car was fitted with the same tires: Continental Tire ExtremeContact Sport, which is a tire we'd used with great success during last year's Tuner Battle Week. 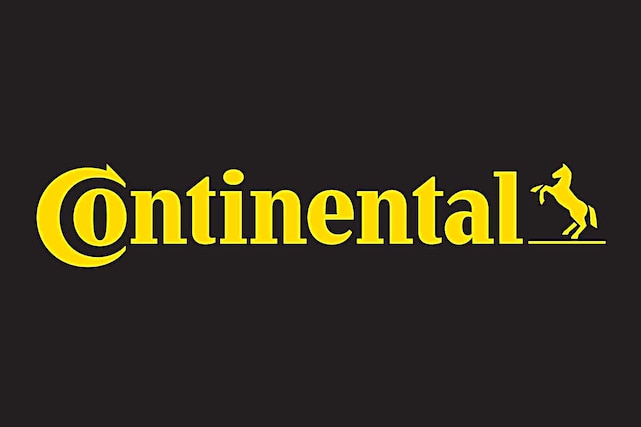 The 2016 champ, Joel Etrata, made his way back to Streets to defend his title in his tried and true K-powered third-gen. Integra sedan. Another familiar face, Jon Lugod in his 2015 Ford Focus ST, added some new aero updates and a bump in power, which resulted in an improved lap times and overall standing. FF Battle 9 brought out a few new competitors that included a brand new Civic Type R, and as always, the action was intense throughout the entire day.

Here's a breakdown of each Race Class entry, their best lap of the day, and where they stood after the dust settled.

Rich has owned his EH Civic for over eight years and credits his friends who built and drove Hondas from the "golden era" as his inspiration for this build. Like many of us, Rich watched his paychecks vanish into thin air as he continually built and modified his hatchback, a resume that includes 10 different engine swaps in this chassis with an affinity toward the K-series family. In terms of fifth-gen. Civic builds, this car checks off all of the boxes and does so impressively, relying on high-quality parts and plenty of upgrades in all of the right places. What once was intended to be a daily driver has since morphed into a track demon. He adds, "I plan to devote this car to the track and want to motivate others to do the same with their cars. The feeling you get after you've put hard work into something and see it perform on track after is priceless."

Thanks: Rudy Velasco, Rain Phothivongsay, Melina Flores, and Donny Garcia for going with me to the event. Shout out to Joe Arreola for putting up with me at work. Vuthy Som for that usual last-minute alignment.

Special thanks to: Allstar Repair (Team ASR), Nemo's Garage, Karcepts, Ktuned, Express Lube Clovis, Import Auto Pro's, AFHKparts, and Hasport for the help on the car. Lastly, shout to the haters for the motivation; I needed to keep going.

Loi Song and the Sportcar Motion camp have been involved with a number of Tuner Battle Week events, including FF Battle, on multiple occasions. This year, they decided to try something different and purchased this EH3 just three weeks before the event. They tore it down, built it back up, had it tuned, and made the deadline. This build represents a fairly tame version of a K-powered track car and one that anyone on a reasonable budget can duplicate. The best part is, there's plenty of room for growth, and by the time you're reading this, Sportcar has already added new cams, bigger throttle body and intake, and more dyno time.

Being that this was the car's maiden voyage, much of the morning sessions were spent making adjustments and recording data. By day's end, a breakthrough took place and the car, under the control of Jason Lee, seemed to be finding its grove. Unfortunately, it was too late and the car's best effort took place after the official sessions had already ended; the best run of the day on record was 1:29.601.

When you're an engine swap guru, like Brian Gillespie, you're going to show up at FF Battle with something unique. This once bone-stock CR-Z originally belonged to Eibach and was a display vehicle at SEMA. Shortly after, a K24 swap, performed by Gillespie and crew, had Eibach on the track with the once Hybrid hatchback. Now under Hasport's ownership, the car sports a Jackson Racing supercharger and unique custom intercooler and radiator set up.

With Bernardo Martinez handling the driving duties, the crew made adjustments throughout the day in search of their fastest lap. This might be the last time you see the K-series heart under the hood as plans call for a switch to L15B7 power (10th gen Civic single cam).

Daniel has owned his DX for about eight years and initially the car was his basic mode of transportation for work and school. However, in 2012 that all changed as he took part in his first track day. About a year later, having been completely hooked by the excitement of racing, he dedicated this Civic to full time track duty. Some opt to throw any and everything at their car then jump on track and hope for the best. In Daniel's case, he prefers a more methodical approach, slowly adding new parts on occasion then getting enough seat time to learn the car's new behaviors and, of course, search for faster times.

Thanks: to my family and workplace, Quality Muffler, for the support. And big thanks to my friend, Jeff, for coming out and help with the day.

Currently an Engine Design Engineer for Honda R&D Americas, Devin Norton made an incredibly long trip from Ohio to compete at FF Battle this year. He brought with him an Si coupe that he drives back and forth to work with everyday and noted this is a true street car, sporting a full interior, including audio components. Other than the Civic Type R, this Si tips the scales heavier than any other competitor at the event. To make up for the weight disadvantage, a CT-Engineering supercharger sees 10psi thanks to an IMT 2.95-inch pulley.

Raymond's list of previous Honda builds is extensive and includes a GS-R as his first car, followed by a slew of RSXs, EGs, EKs, DC2s, and DC2Rs. Currently, along with the ITR that he competed with, he shares time with an E46 M3, to which he adds, "I love both cars dearly, but it's just something about the Honda motor revs, that keeps you coming back."

The high-revving K20 that replaces the native B-series in his ITR carries just a few bolt-ons, with an emphasis placed on suspension components that helped Raymond nab a 1:26.697 and the number four spot.

Thanks: J&R Auto Shop in South El Monte for all the work and supporting me throughout the years, Nissin Japan for supplying brake pads, Chewerks for taking care of my alignment and support, Godspeed Project for supplying me with the new suspension, Team Topak Racing, Trackoholics, Battle Driven, LMR Development, KSR, Aerogenics, and last but not least all my friends and family.

Lugod took part in the 2016 FF Battle and since that time, he's added some additional aero and increased the output of his ST to now deliver 360hp and 410lbs-ft of tq. That power is transferred properly thanks to an OS Giken Super Lock LSD. Having experience in SCCA autocross initially, he made the jump to track events and hasn't looked back. And while you might not be terribly familiar with the Focus chassis, Lugod states, "It's a cheap entry in regards to bang for your buck. You can easily make tons of power with little dollar invested. Used car market for these is under $12,000 for older 2013 models. Majority of the aftermarket support for suspension for the Focus RS will work with the ST."

The upgrades from last year made an impact as the ST was able to scratch some precious seconds off of his previous time and landed a third-place finish.

The FK8 Type R is new to all of us, but in Clement Wong's case, it was extremely new, considering he just picked the car up from a dealer about two weeks prior to FF Battle. In that short period of time, Clement, with help of Raceline USA's Elton Lo, managed to install a set of Swift springs and, perhaps more importantly, a set of Raceline's prototype FK8 camber plates that Elton would prefer to keep private until he's finished full development. The only other changes include new Project MU brake pads and a front-wheel-drive stagger with Rays 57 Transcend wheels. Oh, and a few tricks that Elton came up with to combat the somewhat well-documented overheating issues that some Type R owners have experienced on the track.

Already well equipped for track duty in stock form, Clement and his CTR had an excellent showing throughout the day, and in the end earned a very respectable second-place finish.

Thanks: Elton Lo at Raceline USA for the hard work and engineering that he implemented in the build; Swift Springs for the prototype springs on short notice; Rays MSC for acquiring the 57 Transcend wheels.

We don't have the full rundown on the specs for Joel's Integra sedan because he didn't provide them to us but what he did provide was another victory at FF Battle! Last year he edged out a very game Ken Suen with a 1:25.427. This year he made his move early and was the benchmark throughout the day, his best performance eclipsing last year's time with a 1:24.901.

The K24 set up is remarkably simple and holds up to abuse lap after lap without issue. As for the dialed in chassis and suspension, well, that's due to Etrata putting in the seat time required to get this car exactly where he wants it, and his excellent driving skills should be noted as well. The two-time champ is only getting faster and his consistency is undeniable. 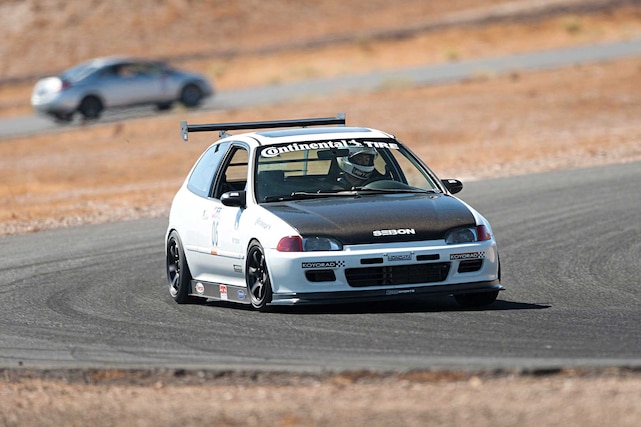 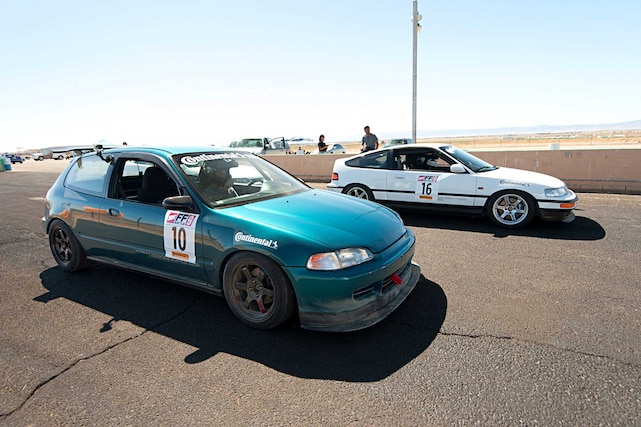