In 2004, the Formula DRIFT Professional Championship got off the ground with its first event at Road Atlanta in Braselton, Ga. Swedish race car driver and stuntman Samuel Hubinette won that initial competition, and two others in the four-round inaugural season, earning the series' first driver's title. Since then Formula D has seen a ton of growth, ultimately doubling the amount of rounds in a season; attracting scores of pro and aspiring hot shoes from all over the world; activating international events from one-off demos to additional regional pro championships; launching a popular live stream; and the list goes on and on.

The round on the streets of Long Beach, Calif.—today the traditional start to the season—didn't materialize until a few years after FD got rolling, but prior to that the three-turn drift layout we know as Turns 9, 10 and 11 of the grand prix course was part of demos by various series pros—displays of fearlessness that generally used the whole track. We still vividly remember those salad days and the utter disbelief of some more seasoned motorsports photographers who couldn't quite yet wrap their brains around what they were seeing. They may not have understood it, but they knew, as we did, it was something special, the words of one shooter still sticking in our brains: "That was the coolest fu##in' thing I've ever seen." 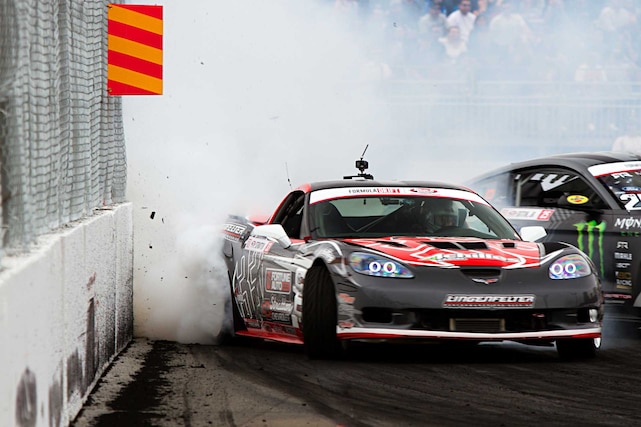 We think so, too—still. If you happened to be at this year's season opener, or watched the live stream, you witnessed the launch of Formula D's 15th season in front of another sold-out Long Beach crowd. And you got quite the show; as we mentioned in our earlier qualifying post, the wall-lined streets of Long Beach claimed more than its fair share of victims over the two-day affair, including Alex Heilbrunn in the IMR BMW E46, Cameron Moore in the Cameron Moore Drift Toyota 86, RAD Dan Burkett in the RAD Industries Mk4 Supra (that one stung), and Pro rookies Austin Meeks in the Galp Nissan S14 240SX, Dirk Stratton in the Stratton Racing Chevrolet C6 Corvette, and Kevin Lawrence in the Enjuku Racing R32 Skyline, among others.

But the talk of the event was the Ferrari—specifically the FFF Drifting Department Ferrari 599 of FD rookie driver Federico Sceriffo. Before Saturday, the discussion centered on the rarity of an exotic in pro drifting; after Saturday, it was about how much damage the car sustained, if the driver survived (he did; got out pretty quickly, in fact), and what caused the conflagration in the first place. To the last point we have an answer from the driver himself—but first a little context.

The incident happened during Sceriffo's Top 32 battle with Chelsea DeNofa in the RTR Ford Mustang GT. On their first lap as a pair, with DeNofa in the lead, there was contact between the cars as they attempted to initiate into the course, the Ferrari possibly a tad too aggressive. The punt sent the Mustang into the tires on the outside of the first turn, while the 599 finished out the lap.

After DeNofa's team addressed the damage on his car, which seemed to be mostly cosmetic, the two lined up for their second run. Wrote Sceriffo afterward, "When I hit [Chelsea] ... I probably cracked [the left upper arm] that broke completely when [I was] leading." 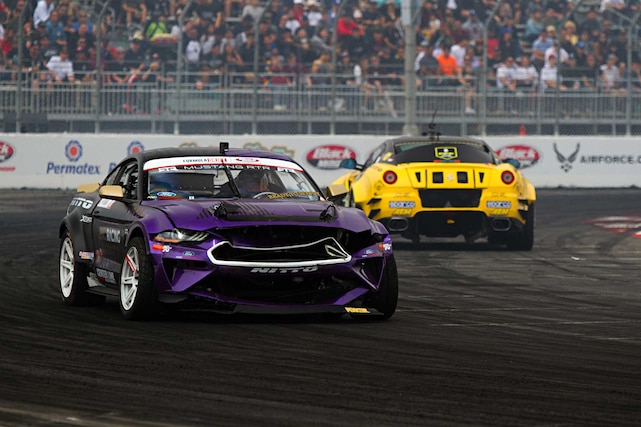 The suspension arm break on their second lap rendered the Ferrari unable to drift, and it took some skill for Sceriffo—a seasoned driver in his own right—to pull into a runoff area also on the outside of the first turn. But the car came to a rest right up against a K-rail, which is believed to have pushed the wheel, hub, and everything attached to it back and up into the wheel well, piercing/severing a protected fuel line. The fuel ignited and suddenly, horrifyingly, things went south, fast.

As we heard from several longtime Formula DRIFT watchers over the rest of the weekend, this was by far the worst car fire in FD history. It took fire teams several minutes to douse the flames, which appeared to engulf most of the front third of the supercar, in addition to spilling under the adjacent K-rail and burning on the other side of the protective barrier. It looked bad. But not bad enough to end the season for Sceriffo, apparently; he has indicated he has every intention to make it to Round 2, with this car. Perhaps most poignant, though, besides the Italian's will to fight on is how the FD family apparently came together to console and encourage him in the hours after the accident. "I saw so many people [after the incident], from all the staff of Formula D, many Pro drivers, and many fans" who extended "support and comfort," the driver shared on social media.

The fire ended a Top 32 opening tandem eliminations that saw both Worthouse Drift drivers—those being 2017 series champ James Deane and his teammate Piotr Wiecek, who won the Irwindale closer last season—take bye laps thanks to their impressive qualifying performances, Wiecek qualifying P1 and Deane P2. Incredibly, both went as deep as the Final 4 in their S15 Silvias, with Wiecek beating Matt Coffman in the Coffman Racing S13 and then Ryan Tuerck in the Gumout 86 before losing to Fredric Aasbo in the Rockstar Energy Corolla. As for the champ, he faced down 2013 champion Mike Essa in the Essa Autosport E46 and then Alec Hohnadell in the Permatex S14, ultimately falling (due to his own suspension failure) to Forrest Wang in the Vapetasia S15. We cannot take anything from 2015 champ Aasbo's mighty win in Long Beach, because it was indeed an achievement. But for our buck, the real winner of the weekend was Forrest Wang. After a year away from FD, and importantly after a tumultuous 2016 where he at one point quit the series, Wang and his program are back with more poise and polish than ever. We knew something was different during qualifying day practice, when he more than any other driver we saw was honing his chase game, getting right up into the so-called pocket and—much as he's given credit for—putting all kinds of style in the trailing position (remember, this was in PRACTICE). We believed he would go all the way in Round 1, and he nearly got there, pushing Aasbo to a One More Time to break the deadlocked judges. He ended up earning second place—the highest he's ever gotten on the podium—and we're certain (or at least certainly hoping) this is the start of his year in Formula D.

For your approval, we submit our pictures from around Formula DRIFT Round 1: Long Beach. We couldn't be more excited for the season ahead, and look forward to the Pro championship returning to action April 27th and 28th at Orlando Speed World in Florida. 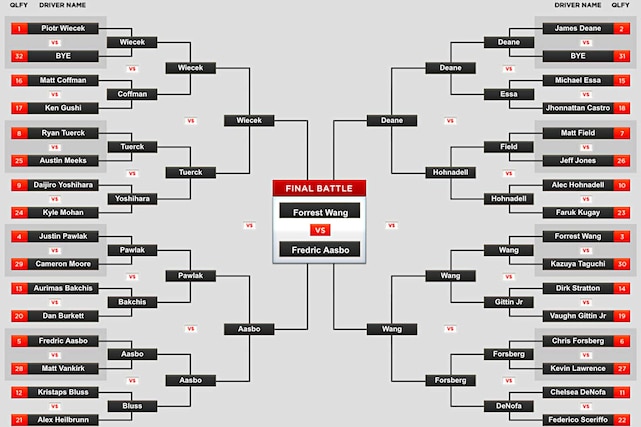 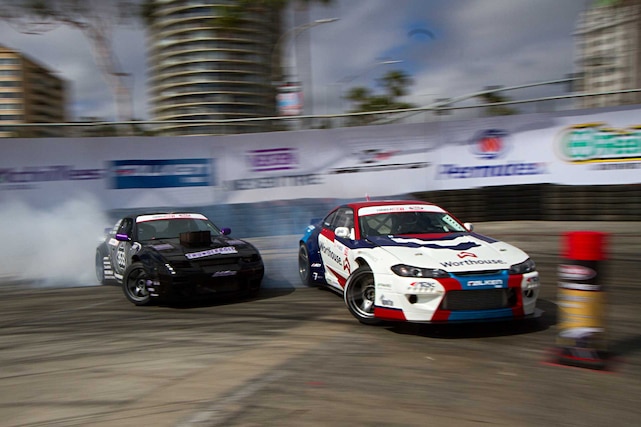