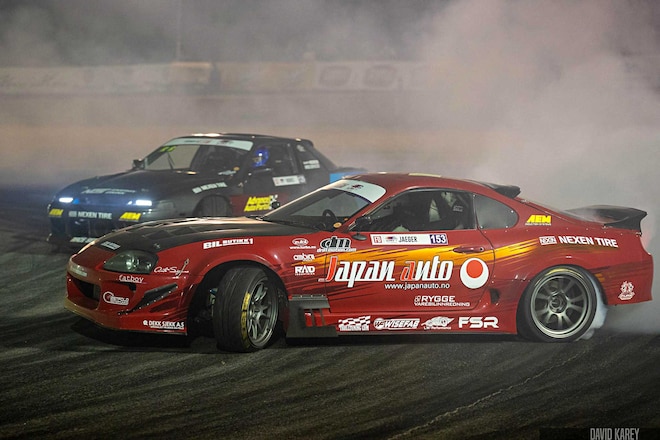 Formula DRIFT's Pro 2 Championship is no stranger to the FD course at Road Atlanta, and this year the series returned to Braselton, Ga., to kick off its 2018 campaign (same as it did in 2016. Curiously the field of drivers looked a lot like it did last year, and the year before somewhat, with the likes of Travis Reeder, Trent Beechum, Kelsey Rowlings, Aussie Josh Robinson, Norway's Ola Jaeger, and others ready to secure a spot in the Round 1 elimination bracket—as well as start a bid for both the Pro 2 title and one of eight Pro licenses up for grabs at the end of the season.

Southern California was represented heavily in Georgia, a contingent that included among others Top Drift alumni Adam Knapik in his Nissan S14, Ryan Litteral in the Koru Works 350Z, Andy Hateley in his E30, and Beechum in his Ford Mustang. NorCal's Crick Filippi in the Team Burn The Most S13 also made the cross country haul, as did George Kiriakopoulos and the Link Engine Management Nissan 370Z, which was back in competition form after its untimely demise at the Motegi Racing Super Drift invitational in April. Reeder in his 240SX came from the Pacific Northwest, as did Dylan Hughes and his S13, attempting a full Pro 2 season this year (he competed in just two rounds in 2017). Midwest Drift Union grad Geoff Donati brought out his S chassis, as did Florida's own Rowlings, while Riley Sexsmith in his 2JZ-motivated NV Auto BRZ and Sebastien Gauthier in his SSG Transport S14 carried the flag for Canada. Jaeger was back in the Japan Auto JZA80 Supra, Robinson back as well in his Holden Commodore Ute, and David Mesker rented the Get Nuts Lab Vapetasia S14 owned by Formula D Pro Forrest Wang to compete in Pro 2 this year. 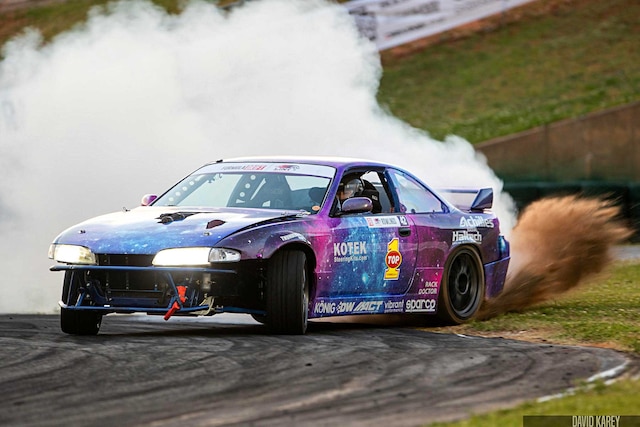 Reeder, Robinson, and Jaeger all already have their FD Pro licenses, but as many Pro 2 drivers are doing these days they're postponing the step up to The Bigs in order to give their programs another year to "mature" (which is to say, they're mostly trying to find the sponsorship in order to do a full season of Pro). Indeed, both Reeder and Jaeger showed their experience in qualifying, Travis taking the top spot and Ola picking up P4. Hughes qualified P2, Sexsmith P3, Hateley P5, Litteral P6, Mesker P7, Robinson P8, Rowlings P9, Kenric Meyer in his BMW E36 P10, Donati P11, Troy Manners in his S14 P12, Beechum P13, Gauthier P14, Knapik P15, and Filippi squeaking in at P16. 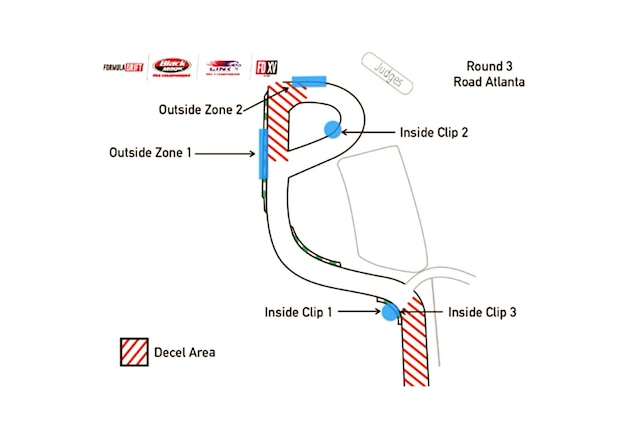 Reeder took a single-car bye run to start Top 16 after Filippi broke, and the first tandem to hit the track was Robinson versus Rowlings; Kelsey was gifted the victory after Josh in the lead slid into the Turn 10A runoff, thus picking up an incomplete. Beechum also picked up an incomplete chasing Jaeger, while Hateley was too much for Manners, Andy creating a sizable gap in the lead and tightening up proximity—matching Manners angle for angle—in the chase. On the other side of the bracket, Hughes and Knapik drove to One More Time (OMT), where Adam leading was a ways off of Inner Clip 2 in the keyhole, enough of a gaffe that Dylan took the W. Meyer had it relatively easy against Mesker, who seems to still be getting used to the Vapetasia Nissan, and then Canadians Sexsmith and Gauthier went to battle, a match that was paused due to contact when Riley's Subaru slowed dramatically after initiation and Sebastien's Nissan got into its side and sent both vehicles off course. Gauthier needed just to make a chill lead pass in order to win but instead straightened at initiation, getting an incomplete and sending both drivers to extra frames. 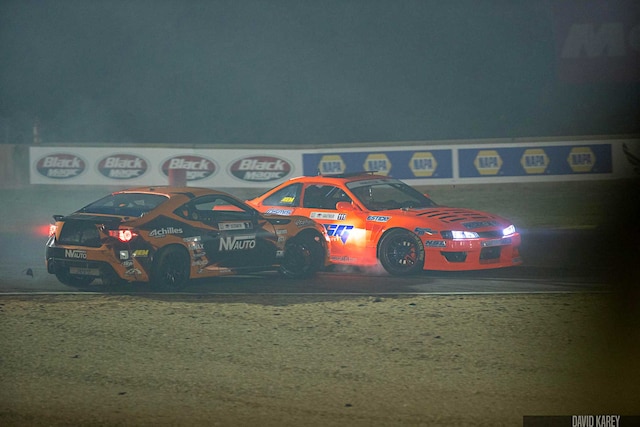 In the rubber match, Gauthier did himself in, running off into the kitty litter on the outside of 10A during his chase. While Sexsmith wound up looping his car in his chase lap, the lead-for-lead comparison gave the distinct advantage to Sexsmith. In Top 16's last brawl, Donati was no match for Litteral.

In Great 8, Rowlings struggled with proximity in the chase spot, letting Reeder advance, and Jaeger overwhelmed Hateley, who had to close a big-ish gap in the chase position and then had a wild lead, going off course near Clipping Zone 2 in the horseshoe, allowing Ola to pass and take the win. Meyer chasing Hughes looped his car just past Clip 1, getting an incomplete and permitting Hughes to move up, and the round of eight closed with Litteral dispatching Sexsmith after Riley bumped Ryan twice—once at initiation, again at Clip 2—from the chase spot before ultimately getting lost in the Koru Works Z33's tire smoke and crashing into the outside wall as cars rounded the corner to go back up the hill to the start line. 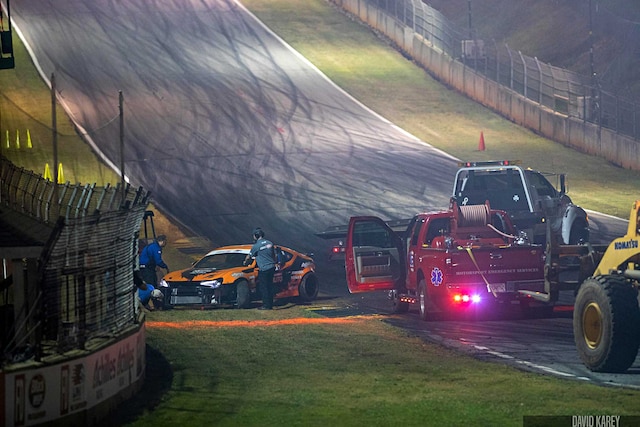 Three of the top four qualifiers made it to the semifinal—Reeder, Hughes, and Jaeger—with P6 qualifier Litteral taking the last spot. Travis and Ola went first, with Jaeger struggling to keep pace as trailer but Reeder making plenty of his own mistakes in the chase, enough that Ola was picked winner. Reeder, the event's number-one qualifier, still took home third place for his high qualifying result. Hughes and Litteral went next, their pairing a battle for the better lead, which this time went to Dylan. And so our grand finale was set. 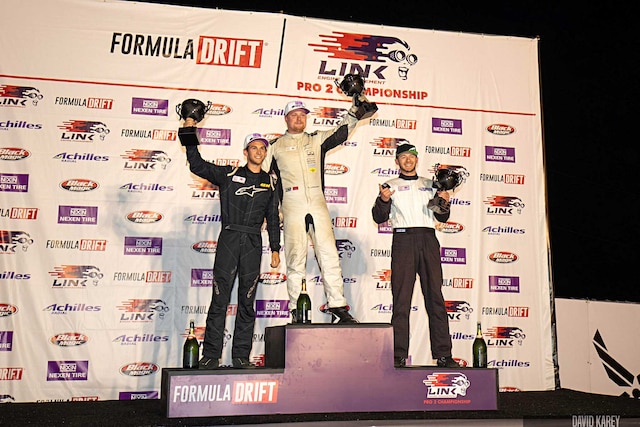 In our Road Atlanta Pro coverage, we touched on the barrier near the first/last turn on the course and how returning cars were getting lost in tire smoke as they chased and going off course, usually winding up in said wall. It happened earlier in the Pro 2 competition to Sexsmith when he followed Litteral, and it reared its ugly head again in the Jaeger-Hughes final; Hughes got lost in the fog of war coming off of Jaeger's Supra, and sure enough he went four off, wrecking and getting an incomplete for his chase. But he still wound up second overall, falling to event winner Jaeger, who earns his second straight podium after finishing second at the Texas season finale.

It was a great way to kick off another Pro 2 year, and now teams turn their attention to Round 2 of 4—which is a whopping three months out. The 2018 Formula DRIFT Pro 2 Championship resumes August 10 and 11 at Gateway Motorsports Park in Madison, Ill. 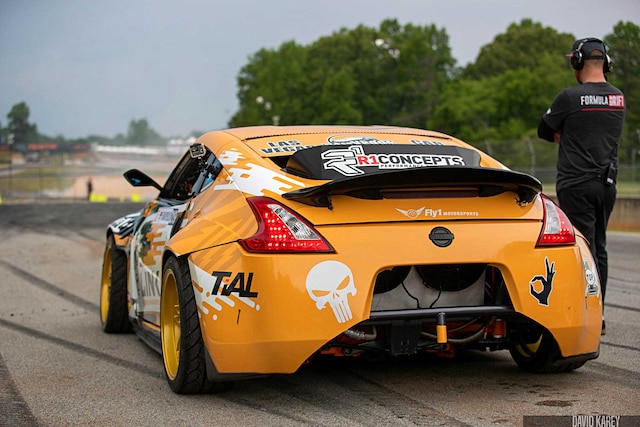 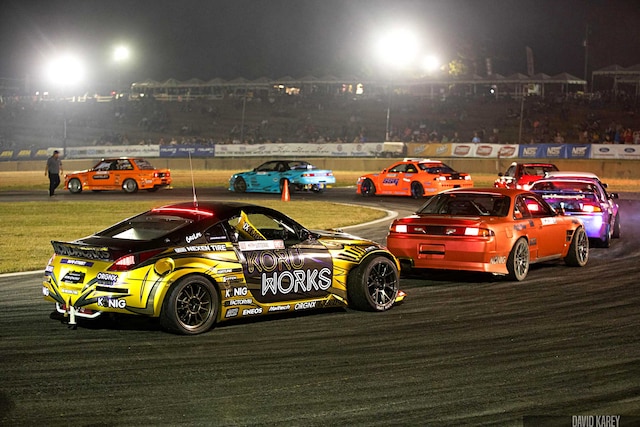 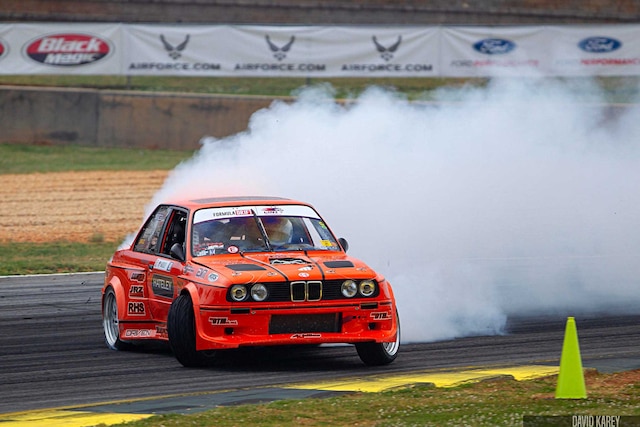 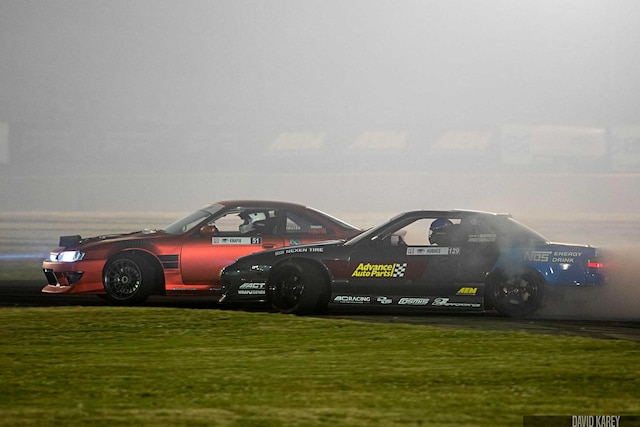