Chris Forsberg in the NOS 370Z takes the win, showing the new guard why he's the series only 3-time champ 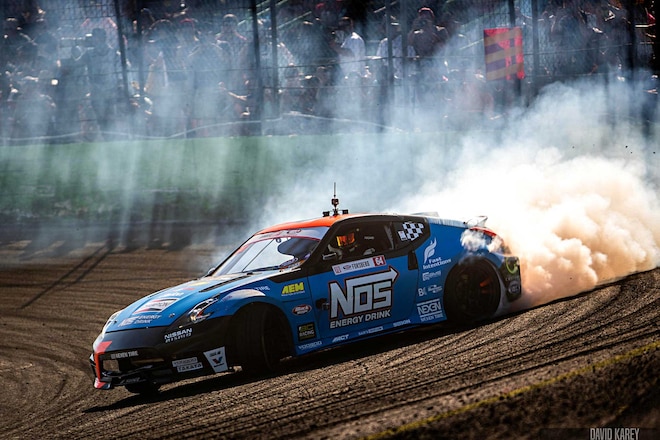 It is impossible to gauge at this point the full effect the Worthouse Drift Team has had on the Formula DRIFT Pro Championship, but its ambitions leave no question: it is here to win. A little more than a year after the squad touched down in America, one of its two drivers, Irishman James Deane, has ridden a wave of convincing triumphs to a driver's title, matching and setting records along the way in one of two 2JZ-GTE-powered Nissan S15 Silvia. At the end of last season, Deane's teammate Piotr Wiecek began to find his groove, winning the 2017 finale, a pace that continues in 2018 with a number-one qualifier at Round 1 followed by a pair of victories in the FD-run Motegi Racing Super Drift Challenge, not an official round on the Pro calendar but using the same part of the Long Beach Grand Prix street circuit as Round 1, as well as several of the same Pro-level drivers.

Yep, there's hungry, new blood in Formula D - but there's also a long list of past champs who aren't quite yet ready to relinquish the spotlight. We saw a bit of that in Long Beach, Calif., in April, with 2015 champ Fredric Aasbo in the Rockstar Energy Drink Toyota Corolla elevating to the top step of the podium, and we also saw it this past weekend in Orlando, Fla., when FD's only three-time champion, Chris Forsberg, in the NOS Energy Drink Nissan 370Z showed both Deane and Wiecek why he has three titles. 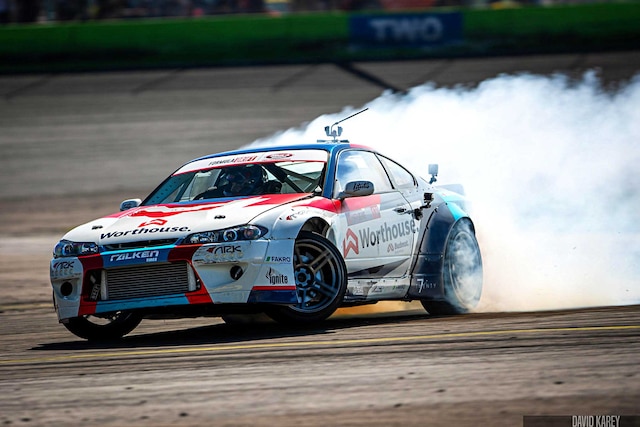 The series returned to the short oval at Orlando Speed World to face the brutal transition coming off the banked Clipping Zone 1 and the so-called "whoops" section that's also on the infield in between Clipping Points 1 and 2 - a bump that not only upsets the cars as they're critically trying to set up for Zone 2, it actually launches them into the air. Both track features are hell on suspensions, prompting experimentation among the competitor ranks - like Kristaps Bluss putting in softer springs on one side of his BMW E92 Eurofighter in order to find a grip (and speed) advantage on the bank. 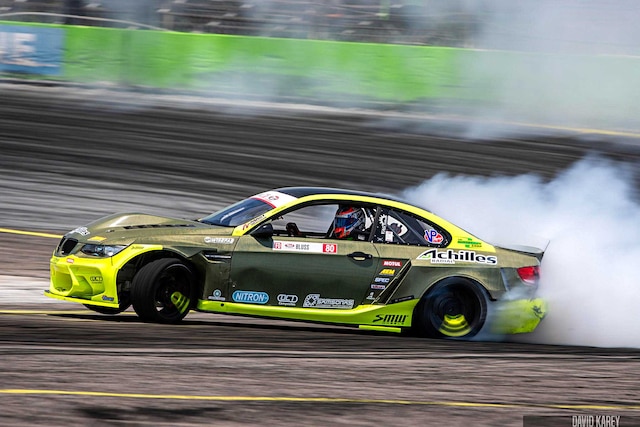 The big comeback story of Orlando was, of course, Federico Sceriffo's and the FFF Drifting Department Ferrari 599 GTB, which improbably went up in flames in Long Beach amid its FD tandem debut (the "Fire-rari" video seen 'round the Internet). After two weeks of thrashing, Sceriffo's team returned the supercar to competition almost fully restored, the only thing we could see missing was a complete livery, but all things considered we'd say that's a pretty remarkable rebound. Fellow Pro rookie Kevin Lawrence, who went with his backup R32 Skyline at Round 1, finally had ready in Orlando the Enjuku Racing S14.3, while FD longtimer Dean Kearney debuted his brand new Oracle Lighting Dodge Viper at Round 2.

In Friday's Qualifying session most drivers were scoring into the 80s (with 30 drivers for 32 spots everyone was basically assured a position in tandem eliminations, so long as you could put together a full pull), but it wasn't until Ken Gushi took his first pass in the Greddy Performance 86 that scores broke into the 90s. Others laid down first laps in the 90s, peaking with Justin Pawlak's and Deane's 96s and Aasbo's 97 late in the order. For run two, still more pilots crept into the 90s, but the qualifier ended dramatically when Deane raised the ante to match Aasbo's 97, and not to be outdone Aasbo put down a final pass that was nearly perfect, 99 out of 100 points. For their performances, both Deane and Aasbo received Top 32-round byes.

Saturday tandem eliminations saw a huge upset early, as 2013 champion Michael Essa in the Essa Autosport E46 fell to rookie Matt Vankirk in his S13; the BMW was involved in a collision with the track wall in pre-Top 32 practice, and while Essa's team was able to get the car back up and running enough to make the start line, Essa realized quickly enough the power steering was not working and had to hand the win to Vankirk. Other highlights from the first eliminator include Matt Coffman and Dirk Stratton's epic battle that went to a One More Time (OMT); in the bonus frames, Coffman in his S13 stuck right to the side of Stratton's C6 "Driftvette," but when it came time to switch positions Matt in the lead ended up getting too close to the Zone 1 wall at the top of the bank and got sucked up into it, ending his lap and his day. 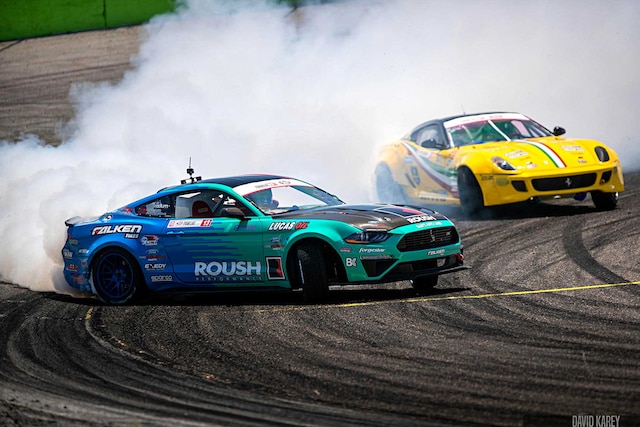 Elsewhere in Top 32, Pawlak and Sceriffo met, the Ferrari struggling mightily with speed and keeping angle against JTP's Roush Falken Mustang. Finally, Kearney looked completely at ease in his new Viper, the car seeming not to miss a beat in dispatching Alex Heilbrunn's IMR E46.

Top 16 saw Stratton and Wiecek go toe-to-toe, and lead for lead it was a toss up, but Piotr was clearly the better chaser this time around. Jhonnattan Castro in the Gerdau Metaldom 86 faced his ex-team boss Forsberg, and while Castro will probably be remembered forever for his colossal battle against Deane at this track in 2017, this year he looked far more fallible, misplaying the course in spots and ultimately losing to the NOS Z34. 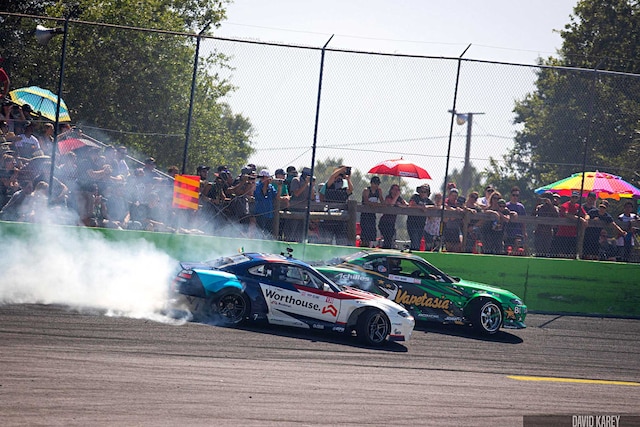 Deane and Forrest Wang in the Vapetasia S15 was hyped as a battle of the ages - two 2JZ Silvias, two super stylie drivers - but in Orlando it didn't quite pan out that way, Wang possibly dealing with a power delivery issue (read: drivetrain) after his car came down pretty hard off the bank on his first lap and didn't seem right for the rest of the match, which he lost. Top 16's only OMT was for "Frenemies" Odi Bakchis in the Falken S14 and Matt Field in his Wish Falken Corvette; the pairing went to OMT, where Field seemed to struggle to get his Chevy to angle heading to Clip 2 as he trailed Bakchis, enough of a gaffe to give his opponent the W.

In the Great 8, Aasbo overwhelmed his Toyota Racing teammate Gushi for the win, while Forsberg knocked off Wiecek by capitalizing on his strong performance in the second half of the track (Forsberg excelled at Clip 2 and especially Zone 2). Like Aasbo, Deane was too much for Falken teammate Bakchis, and Ryan Tuerck in the Gumout 86 completed the semifinal foursome after he dispatched Pawlak in a battle that was so close we felt it could've gone either way. 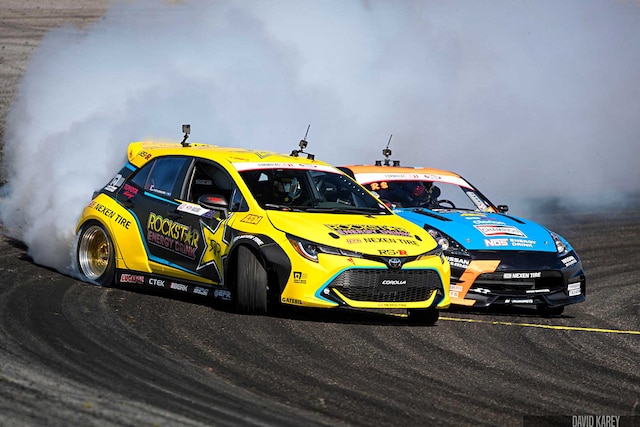 Formula DRIFT as a competition has evolved so much over its lifetime that losers of the last few rounds in any tandem bracket are really just making the smallest of errors that come with a biggest of price tags. In their Final 4 bout, Aasbo and Forsberg—two titans of the sport—drove to a OMT before Aasbo ultimately botched the line heading to Clipping Point 2 as he chased Forsberg and that was enough to cost him advancement. However, because he qualified number one he still got on the podium in third place.

As for their Final-4 duel, Deane and Tuerck put in two valiant efforts, but it was Tuerck's lack of proximity in the chase spot that was enough to give the 2017 champ his day in the Orlando finale. And he would be opposed there by a three-time champion. 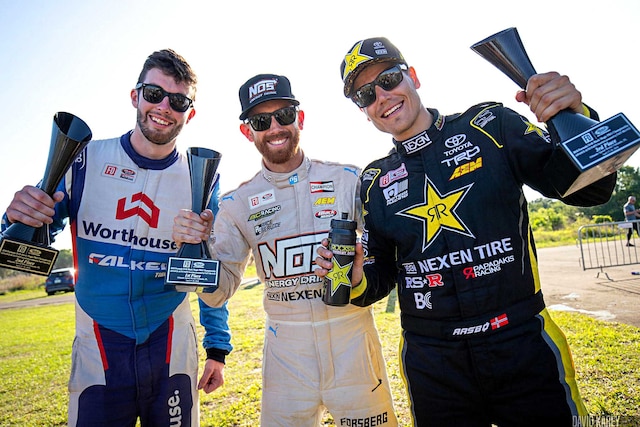 On their first lap, Forsberg - who switched out motors in his Z between qualifying and eliminations the previous night - reeled in Deane from the trailing position to wind up door to door as the two went through Zone 2 and crossed the finish line. With the crowd expecting an equally amazing second half to the battle (and more, probably), Deane wound up nosing his S15 into the Zone 1 wall just past initiation, a hard hit no doubt but the driver appeared okay afterward. Unfortunately he couldn't finish out the match, thus allowing Forsberg to pick up his first event win in four years.

One thing we feared heading into the 2018 FD championship was that Worthouse would come in again and have their way with the place, but thanks to series veterans and past champs Aasbo and now Forsberg that seems less likely to happen at this early point in the season. That's not to say Deane and Wiecek aren't in the ballpark - both now have found the podium this year, and with two rounds of eight down it is still far too early to prognosticate the likely future. But we may now have a slightly clearer picture of who will make this year's title fight a true chase (and not just a domination). Enjoy the photo gallery, and Formula DRIFT is back in action in less than two weeks, holding Round 3 at the birthplace of FD, Road Atlanta, on May 11 and 12 in Braselton, Ga.