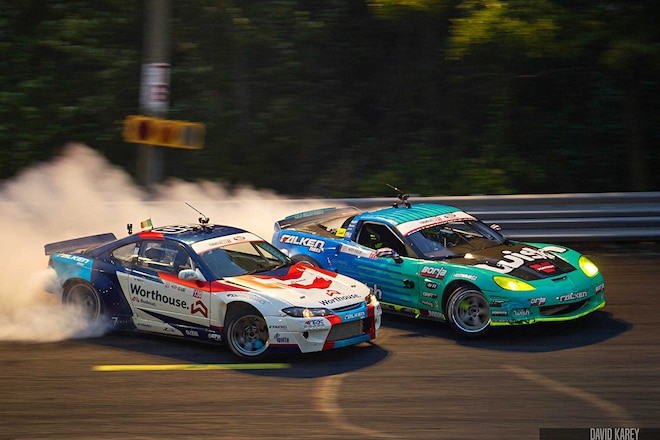 Maybe it's us, but it seems now more than at any point in Formula DRIFT's 15-year history competition is guaranteed to be grueling. By that, we mean gone are the days of sure things (mostly) among competitors. As a fan, you can go to a round of FD and expect a marathon of hard driving, a heavyweight bout, a drawn-out war. The latest example of this was Round 4 of the 2018 campaign, set at Wall Speedway in New Jersey, the midpoint of the championship in addition to being Formula D's 100th Pro round (congrats, guys!)

Rain was forecast for much of the event but never materialized, Mother Nature trying her best to throw a curveball at Thursday practice but most teams took the on-again, off-again showers in stride. As in past events at Wall, the course was changed, resembling a former version that flung drivers across the infield (and over whoops a la Orlando) after exiting Outer Zone 2 and then along the crease of the banking of the 1/3-mile oval before crossing the stripe (last year, drivers slid through Zone 2 and then transitioned past a left-hand-side inner clip before having to transition again to fill the last outer zone - from above it looked like a bean within the short oval). 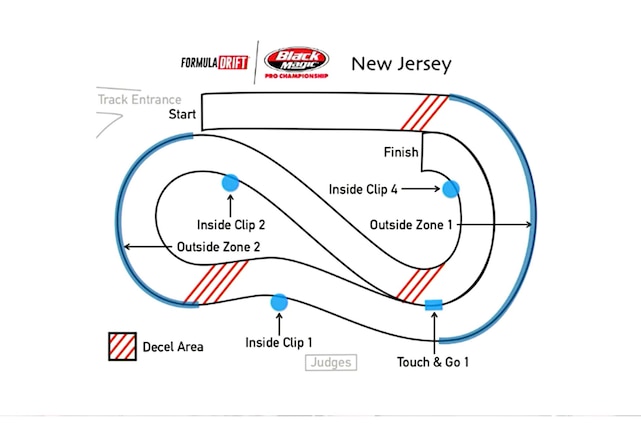 The Armco at the top of the Zone 1 big bank was also changed for 2018, initially lined with thick plastic so the unlucky few cars that would inevitably get sucked up into the guard rail would be able to glide across it rather than get chewed up. However, that only lasted until qualifying; after incidents with Austin Meeks in the Galp S14, Jeff Jones in the DOC 370Z, and Kazuya Taguchi in the Jerry Yang Racing GT-R, and ensuing repairs that took way too long, event organizers opted to ditch the lining and go with bare Armco.

Early in the first qualifying session on Friday, Alex Heilbrunn in the IMR E46 announced very loudly and clearly he was back, registering a 90 out of 100 score to set the pace (if you read our piece from the previous round you'd know he lost an engine at Road Atlanta before being able to compete). It held up until the top 10, when Odi Bakchis in his S14 and then Odi's Falken Tire teammate Justin Pawlak in his Roush Performance Mustang both scored 92s. On lap 2, 2013 champ Mike Essa in the Essa Autosport E46, Matt Field in the Falken Wish C6 Corvette, and Round 1 winner Fredric Aasbo in the Rockstar Energy Corolla joined the 92 club, but it didn't matter because Bakchis reset the high mark at 93, and then Pawlak - who qualified no. 1 at Round 3 - put down a 95. No one could top that. 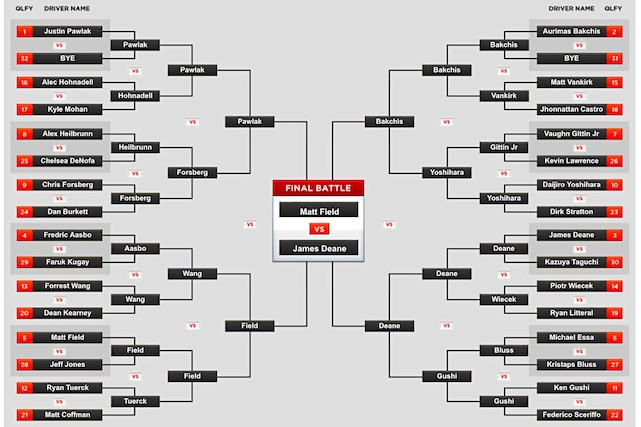 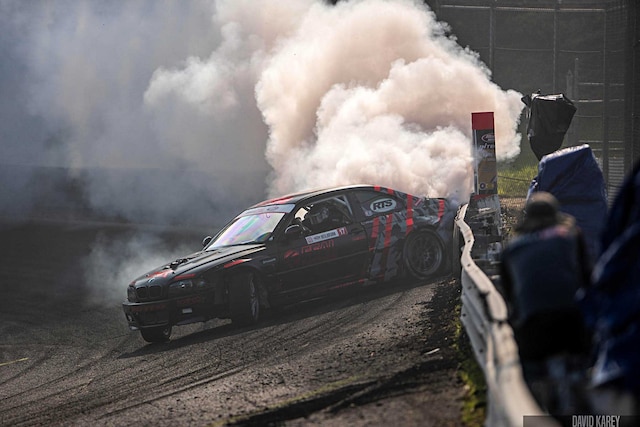 For qualifying well, Pawlak and Bakchis received Top 32-round byes on Saturday, as did Piotr Wiecek in the Worthouse Drift S15, though his bye was for a different reason; his opponent, Ryan Litteral, had mechanical issues with his Koru Works Z33 earlier in the event and was unable to continue.

Highlights from Top 32 include Heilbrunn's epic scrap with Chelsea DeNofa in the BC Racing Mustang, which looked like it could've gone to a One More Time (OMT) but ended up going to Alex, and the tandem between Forrest Wang in the Vapetasia S15 and Dean Kearney in Wang's backup car, a similarly liveried (but with Oracle Lighting branding instead of Vapetasia) S14; Kearney had power plant issues (again) with his Viper and rented the second Get Nuts Lab Nissan, which was his first time in a left hand-drive S chassis. He put up a good fight despite the setbacks but Forrest ended up winning the match. 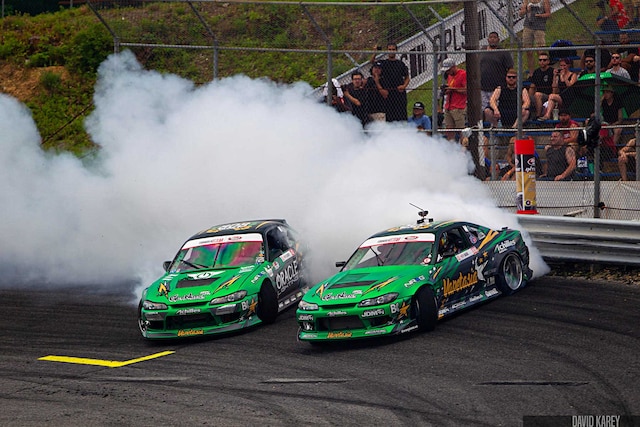 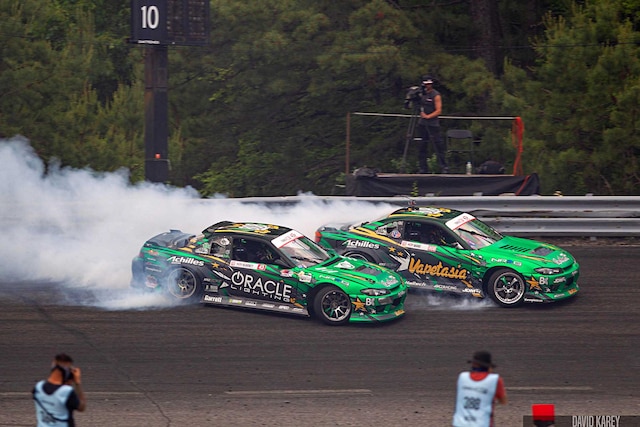 The opening eliminator had two pairs go to OMT, the first being Jhonnattan Castro in the Gerdau Metaldom 86 versus rookie Matt Vankirk in the Closet Creations S13. Both put in less-than-stellar first laps, and in the deciders Vankirk had the better chase, with Castro sacrificing too much angle and at one point nailing mid-car Inner Clip 1. Near the conclusion of Top 32, Essa and Kristaps Bluss in the HGK Racing E92 lined up for an all-BMW showdown, which went to bonus laps where Essa was off the racing line both leading and chasing, judges scoring the runs in favor of Round 3 winner Bluss.

In Top 16, Pawlak overwhelmed Alec Hohnadell in the Black Magic S14, and Heilbrunn's return to form was cut short by FD's only three-time champ, Chris Forsberg in the NOS Energy Z34, after Alex in the lead initially scraped the bank railing and lost his left rear tire; he was allowed to replace the rears, because the Armco was deemed to have caused the de-bead, but was still saddled with a zero for his lead lap. The Zone 1 Armco played into the battle between Aasbo and Wang as well, when Fredric's Corolla lost a ton of forward momentum after it tapped the barrier and Forrest's Silvia had nowhere to go but into the side of his opponent's car. Vehicles collided, action stopped, and Aasbo was found at fault, an incomplete lap he could not overcome and was thus eliminated, the Norwegian driver's first non-podium finish of 2018. Matt Field's victory in the Wish Falken C6 Corvette over Ryan Tuerck in the Gumout 86 wrapped up the first half of the round of 16. 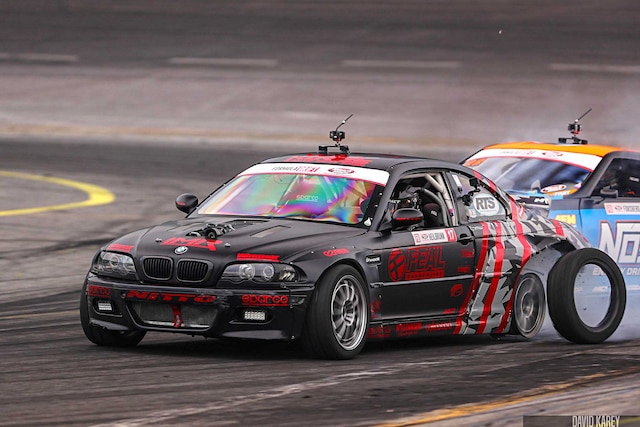 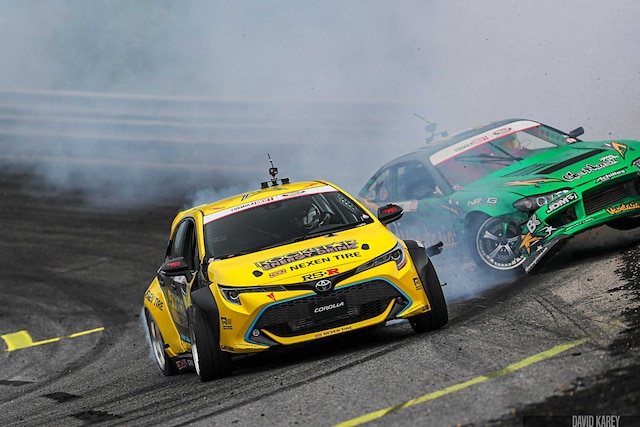 On the other side of the elimination bracket, Odi got past Vankirk, who looked like he went two wheels off in Outer Zone 2; 2011 drivers champ Dai Yoshihara in the Turn 14 BRZ triumphed over 2010 champ Vaughn Gittin, Jr., in the Monster Energy Mustang with a better chase; and Worthouse Drift bros Piotr Wiecek and Deane were the second set of twins to tussle at Wall Speedway, a match that thrilled when both cars drifted the bank nose to nose but ended anticlimactically after Wiecek in his lead lap started losing power, which we learned later was caused by an overheating issue.

Top 16 ended with a weird one between Ken Gushi in the GReddy Performance 86 and Bluss. After incidental contact exiting Zone 2 with Gushi in the lead and Bluss pushing hard, there was more contact with the BMW at point when it tried to flick to initiate but in the process slapped Gushi's Toyota across its nose. After watching the incident on video a number of times and then consulting the rulebook, judges decided that Bluss bore responsibility for the contact because his car dropped below the line heading to initiation (basically he needed to stay in his lane); however, the offense only merited a re-run of the lap, which the drivers did and it resulted in a One More Time. Perhaps trying a bit too much, Bluss knocked into Gushi again in the first extra frame, this time on the bank as they were side by side, and then the killer was when the Latvian pilot in the lead again looped his E46 as he attempted to slide past the course's Touch and Go. 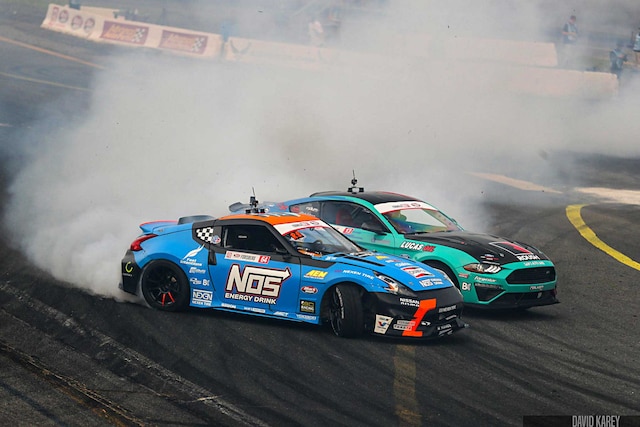 The OMTs continued into the Great 8, with the judges needing cleaner runs from Pawlak and Forsberg after their first two. This, too, ended unusually, as Chris in the lead seemed to have a mechanical problem coming off the start line and ended up handing the win to Justin. Then it was Field and Wang's turn, an insanely good pair until contact during lap two with Forrest in the lead. It looked like (and judges confirmed) the Vapetasia S15 slowed at Clip 1, an area cars are not supposed to, and the Falken C6 had nowhere to go but into the Silvia. If this sounds a lot like the incident that caused Forrest to rage quit in 2016, you won't be blamed for the comparison, but at least this time he seemed a little more sportsmanly about it and took the L in stride.

In their Great 8 matchup, Bakchis and Yoshihara put on a barnburner until Dai looped his BRZ at the Touch and Go on his lead lap, ending his Saturday. The last two of the quarterfinal were Deane and Gushi, and the 2017 series champion seemed to be simply too much for the driver of the GReddy 86. 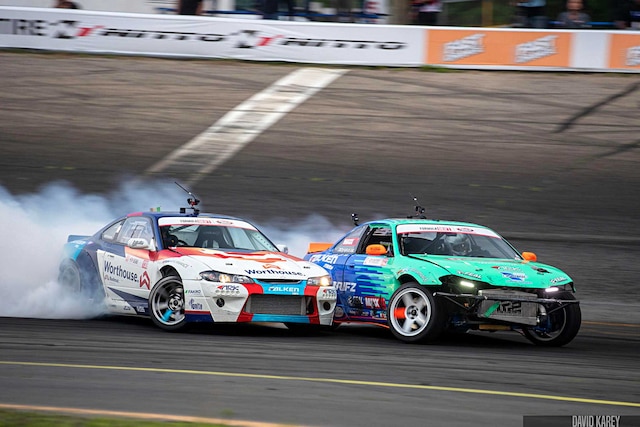 It was an all-Team Falken Tire Final 4, and it would be a slog to boot. Pawlak and Field were up first, Mustang versus Corvette; the American muscle show was a doozy that went to OMT, and in the overtime Field put in a marginally better chase lap (honestly, these things are almost getting too close to call). While he was eliminated from Round 4, JTP still earned third place for being the highest qualifier of the semifinals.

In the Final 4's other duo, Deane had a remarkable chase (that followed a bonkers initiation) but so did Bakchis, which led to another One More Time. The bonus runs saw more greatness in the first lap, but in the second Odi seemed to make too many sacrifices in order to keep up with James, judges giving Deane a ticket to a second 2018 podium finish. 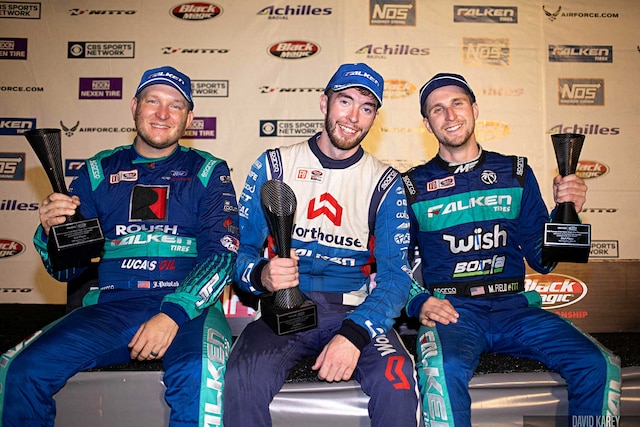 We honestly don't know how the event final between Deane and Field escaped with no One More Time, because it looked equally flawless from both drivers on both laps, but the judges came to a decision pretty quickly. James earned his first event win of the 2018 season, becoming the fourth different winner of as many rounds this year. 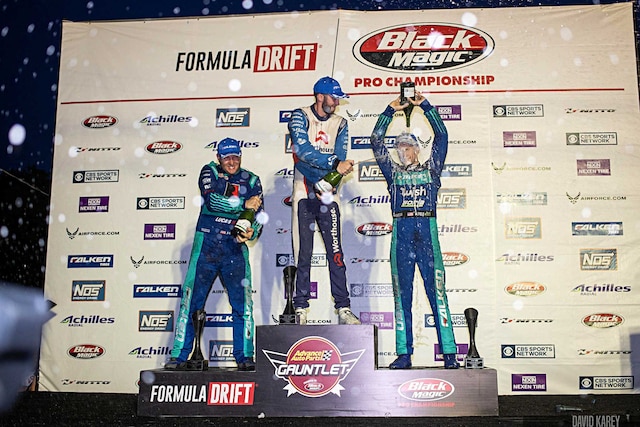 With a different winner from each round, and half the season gone, the points race is starting to heat up. Aasbo came into New Jersey in first place with a 37-point edge over Forsberg in second and 52 markers up on Deane in third, but now Deane takes the lead with a 17-point margin. Forsberg sits in third 39 markers adrift, while Pawlak jumps from fifth to eighth. Formula DRIFT takes its summer break before returning to action July 20 and 21 in the Pacific Northwest, at Evergreen Speedway in Monroe, Wash., for Round 5 of 8.