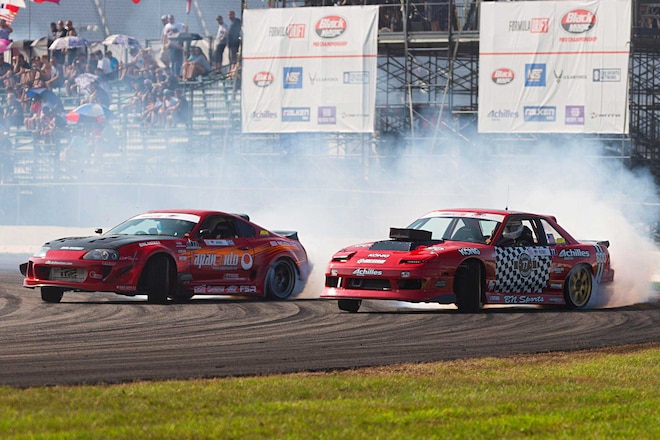 After a three month-long summer break, the lady and gents competing in Formula DRIFT's Pro 2 development series joined FD's Pro teams at Gateway Motorsports Park in Madison, Ill., for Round 2 of 2018's four events. But things almost got out of hand when a sudden squall let loose on the facility and its patrons about an hour before Top 16 tandem eliminations were to begin.

With Friday's Pro qualifying complete, everyone was gearing up for Pro 2 when the lightning storm rolled in. The cell had sideways rain and high wind gusts that tore down awnings and in one case catapulted a 65lb. sand bag weight over Nitto Tire's trailer (you may have seen the video floating around Instagram). While there were no reports of injuries (that we know of) some of Formula D's video and public address equipment was damaged in the outburst, and since it happened so close in time to the beginning of eliminations, the executive decision was made to call off the contest - at least for the night - and get it in before the Pro guys started their eliminations on Saturday. 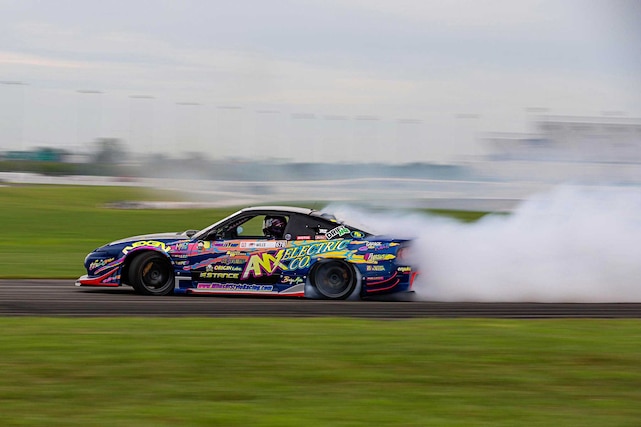 Pre-storm an impressive 29 cars were on hand to qualify for the Top 16 opening eliminator. The new segment of tarmac - appropriated from Gateway's infield road course - was FAST, and abrasive apparently, so tire wear was a concern. Over the course of Pro 2's three days FD tweaked the course for max flow, but even so many drivers seemed to struggle linking the first two clipping points.

No Pro 2 pilot managed to eke out a 90 score or higher (out of 100 points possible) but many got into the 80s, starting with Dustin Miles in his JDM-liveried Miles of Style Racing S13, who earned an 83 on his first orbit. Riley Sexsmith in the NV Auto BRZ was your number-one qualifier with an 88, while Round 1 winner Ola Jaeger in the Japan Auto Mk4 Supra closed out Lap 1 with an 85, good enough for P3 and tied with Sebastien Gauthier in his SSG Motorsport S14. Jonathan Hurst and his Dynosty G37 coupe slotted in between first and third qualifiers with a score of 87. 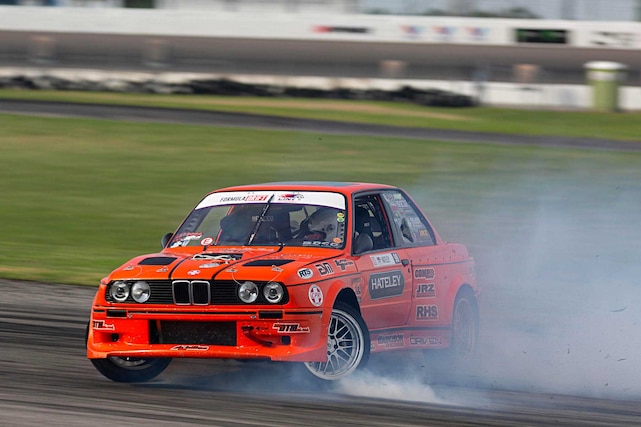 With weather pushing eliminations to Saturday morning (instead of Friday afternoon), things got rolling pretty early in order to get Pro 2 and Pro squeezed into one day. But drivers were up to the task, as first pair Sexsmith and Andy Hateley in the Hateley Motorsports E30 drifted to a One More Time (OMT) indecision. Hateley went on to claim the win in the extra frames with better proximity in the chase spot and an excellent line in the lead.

Dylan Hughes in his S13 went unopposed due to Ryan Litteral having mechanical issues with the Koruworks 350Z, so the next tandem pitted Gauthier against Brody Goble in his S14.5, and Goble looked good, laying down an aggressive chase and nailing all clips and the zone on his lead. After Goble's win, Miles and Josh Robinson in his Holden Commodore Ute went next, Robinson coming off an excursion into the tire wall earlier in the day during practice. The Ute may not have been 100 percent after its wreck, because Robinson's chase seemed to sacrifice angle and line to maintain proximity, while his lead lacked fluidity. Miles got the nod to move on. 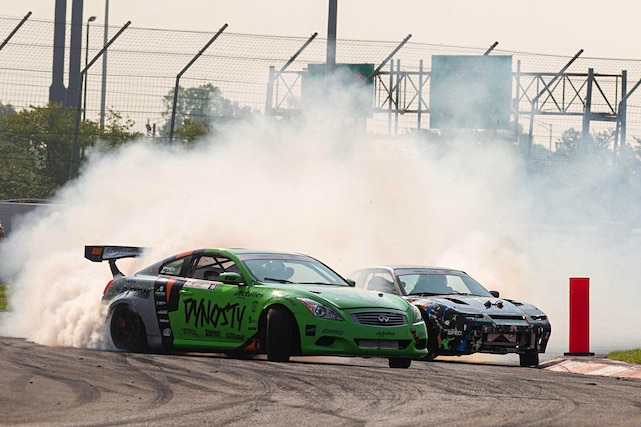 Hurst and Team Burn the Most's Crick Filippi in his S13 were in the spotlight next, with Hurst getting docked by judges in both the lead and chase positions due to his unorthodox line through the course, thus advancing Filippi. The battle between Koruworks teammates Alec Robbins' 350Z and Garrett Denton's 240SX was not pretty (early in his chase lap Denton ended up in the grass) but Robbins was able to squeak out the W. Top 16 concluded with Travis Reeder in his S13 upsetting Jaeger, and Hooman Rahimi in his Z33 advancing with a bye run after Andrew Lewis's S13 broke.

Like Top 16, the Great 8 opened with a OMT, this time featuring Hughes and Hateley; the bout went to Hughes and his superior lead lap. The succeeding showdown between Miles and Goble also needed a OMT, but after Miles went four wheels off at the circuit's Touch & Go Goble easily secured the move on up. Robbins dispatched Filippi with more angle in the lead, and the round of eight ended with Reeder's dominant performance versus Rahimi. 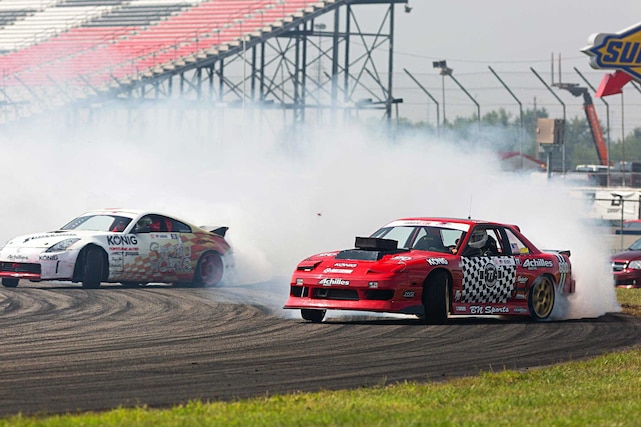 The semifinals were an all-V8-swapped Nissan affair, with Hughes in his S13 drawing Goble in his S14, and Robbins in his Z33 getting Reeder in his S13. Hughes had it slightly easier, as a chasing Goble appeared to go four wheels off at Clipping Point 3, an off-roading adventure that exploded his body kit and more; Goble asked for a Competition Timeout afterward and likely found event-ending damage, because he did not return to the grid for his lead lap. As for Robbins and Reeder, it was all Reeder, Travis winning with a good chase and an even better lead. Robbins still earned third place, though, for out-qualifying Goble (Robins was P7, Goble P13). 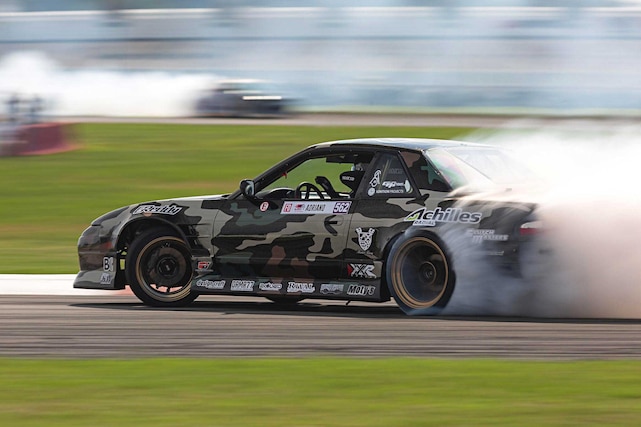 The closer was a good one, with each driver leaving it all on the track to secure the top spot on the podium. Honestly, we're not sure how Reeder cinched it up, because from our vantage point it looked like chasing he had to sacrifice a little line in the sweeper to keep pace with Hughes, and then in the lead he seemed a ways off of the Touch & Go. But judges saw it differently and awarded Reeder with the victory. 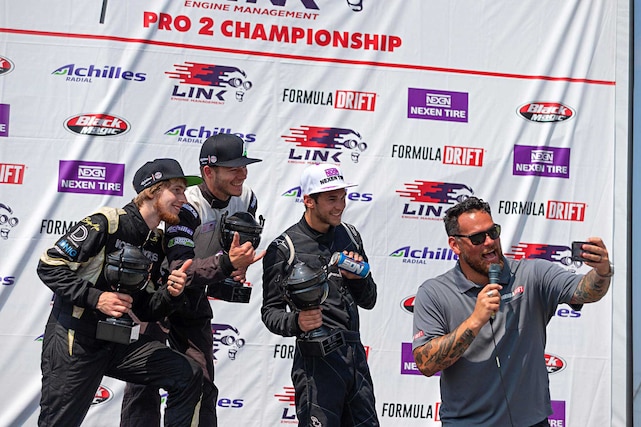 Reeder now jumps to the top of the standings, holding a slim 1-point lead over Hughes, and interestingly switching positions with Jaeger, who currently sits in third (where Reeder was after Round 1). Hughes remains in second and Litteral is still in fourth, but Sexsmith and Hateley swapped spots, with Andy jumping from sixth to fifth and Riley dropping from fifth to sixth. And if the season were to end today, the top eight getting their Formula DRIFT Pro licenses would also include Filippi and Robbins. 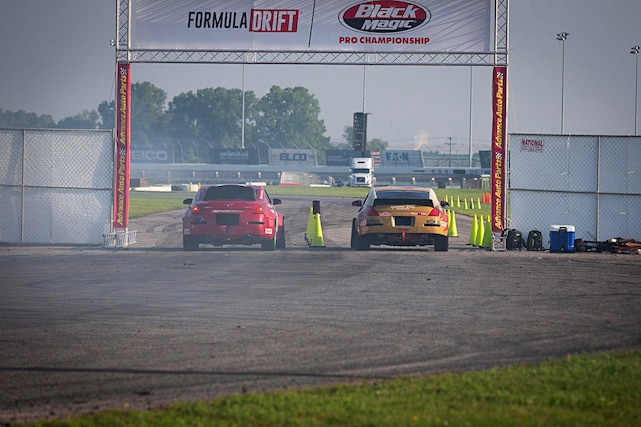 The Pro 2 season is now officially half over, and up next is Round 3, set for September 13th and 14th at Texas Motor Speedway in Fort Worth. If you can't be there in person, we always suggest to Formula D live stream http://www.formulad.com/live - which now includes Pro 2 qualifying! Rejoice!