After seeing the hype for years, it was finally time for Super Street to experience in person the drifting madness that is Winter Jam at Sonoma Raceway. Like we described in our coverage of last year's affair, the event is MASSIVE—two days, six courses, hundreds of drivers and cars (including several pro and pro-am favorites), basically everything a drifting fan could ever want to see. We had planned to tag along with SS extended family RAD Industries—home of driver and mullet enthusiast RAD Dan Burkett and his team of Supra enablers—and were ready to party it up NorCal style. That is, until Editor Bob—our point person covering Winter Jam—tripped and fell the day he was supposed to leave, slicing a divot of flesh out of his knee as it struck the edge of a diamond plate panel on the ground. Seven stitches and a strict doctor's orders not to bend the injured leg later, our best laid plans were scrubbed. F@#k! Luckily, our buddy and trusted Formula DRIFT shooter David Karey was already going and planning to take pictures of the eighth annual event, and once again he saved the day. Unlike 2017, this year's WJ was wet, with rain for much of Sunday, but that didn't stop most of the horde of drivers from showing up. When we spoke to organizer Faruk Kugay last year, he seemed to suggest they were going to try to cap entries sooner anyway, since 2017's 357 may have been a tad too many. RAD Dan brought along his comp Mk4 Supra and a brand new JZA80 practice car that was literally finished just a day or so before, loaning it to 2015 Formula D champ Fredric Aasbo, as the two tandemed and were part of party trains all weekend long. Additional FD pros included frenemies Odi Bakchis in a backup S14 and Matt Field in a C6, Dean Kearney in his backup Oracle Lighting Viper, Matt Coffman in his Ford V8-powered S13, and former pros Pat Goodin (driving Matt Field's Falken S14) and Georgy Chivchyan (in his NGK S15). Pro 2 champ Travis Reeder turned up in his S13, and we also spied pro-ams Micah Diaz in his E46, Aaron Parker in "The Wolf" FD3S, Trent Beechum in his digi-camo S14, and RAD's Joe Pasco in his E36. Animal Style, Team Burn the Most, and Team RUF, among others, were in the house, as was guest judge (for Saturday's team competition and Sunday's tandem comp) Brian Eggert from FD. 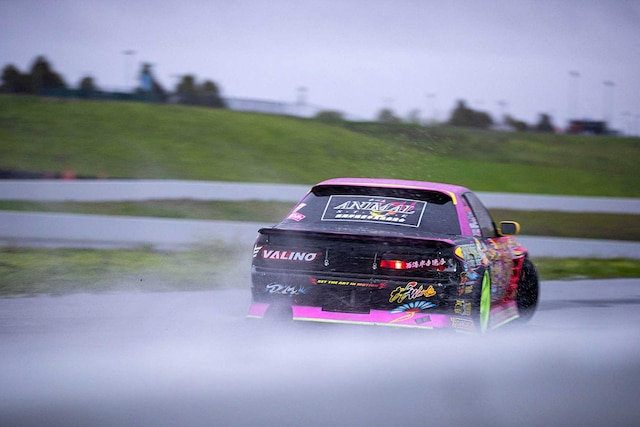 This was probably one of the hardest one of these things we've had to write because we so wanted badly to be there in person this year. Ah well, there's always next year (we say, brokenheartedly). In the meantime, allow David Karey to take you back to Winter Jam 2018 through a gallery of his fantastic photos (just ignore all the fox body Mustangs; we don't know what the hell he was thinking).