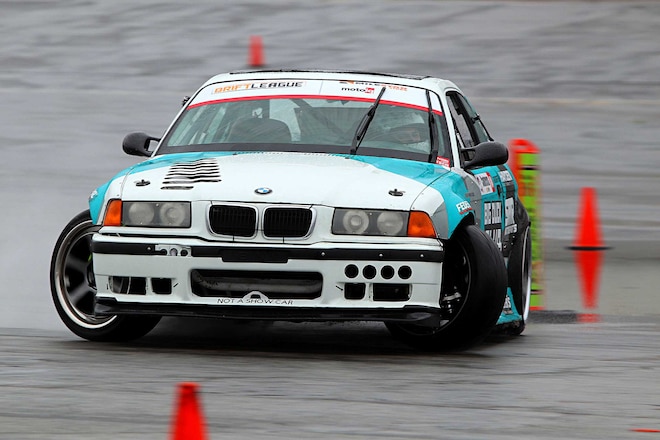 First, a little context—in an average Southern California winter and spring, we usually only get a handful of rainmaking weather systems that will pass through the area. Even if we get one or two really big storms, even in a row, you can bet that in a week or less the sun will return and temps go back to normal and everything will be hunky-dory. But not this year. No, this year we've been battered by storm after storm after storm in what feels like an unrelenting weather pattern from hell.

It's against this unusual backdrop of crappy weather (for SoCal, anyway) that The Drift League held the first event of its 2019 pro-am championship at Irwindale Speedway. In its inaugural season last year, Rome Charpentier in the We Are Lions BMW E36 clinched the championship in dominant fashion and was one of about eight or so returning drivers from 2018 who were at the opener, making up about half the competitor entries; the other half included newcomers the likes of Keoni Rodrigues and his Nissan S13, Shawn Hartum and his Mazda FD3S RX-7, Eder Plascencia and his Pontiac GTO, and others. 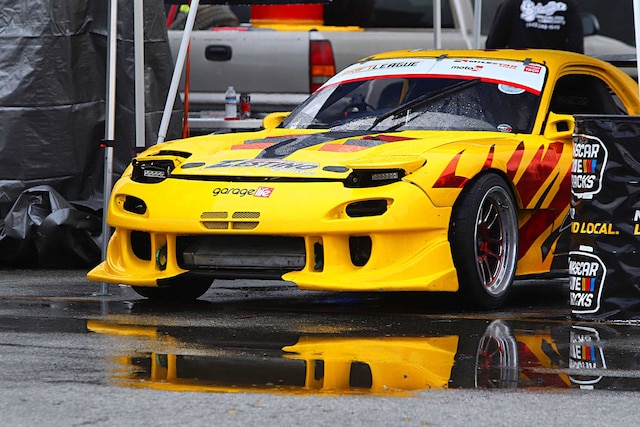 The track layout was new, employing just the inner oval of Irwindale's bowl. Cars drag raced to the start down the backstretch, initiated into the southeast end low bank outer zone, flicked back around momentarily for the Formula D inner clip along the front stretch, then flicked again in the other direction to the other end of the inner oval for another rear clipping zone before tightening the radius at the end of the bank to flick again in the other direction, the course ending by wrapping around the media photo box in the center of the infield. The day began with practice sessions, followed by mid-afternoon qualifying and Top 16 at night—an entire weekend's worth of competition squeezed into a single day. And, as suggested earlier, it rained. A lot. 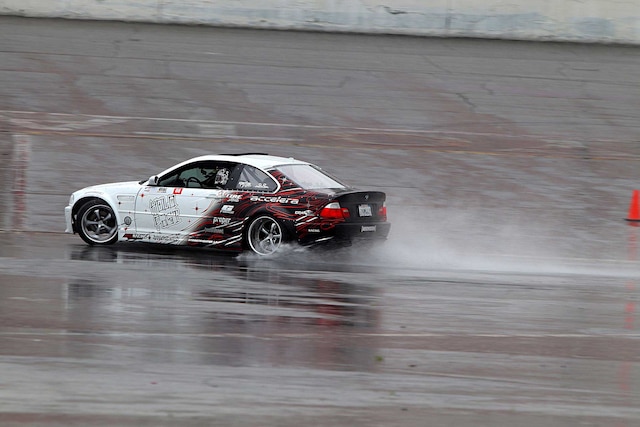 How much? Well, save for a four-hour window of dryness at the beginning of Top 16 in the early eve, the entire event was held in precipitation ranging from drizzle to downpour.

The always-colorful, burnout-happy Micah Diaz picked up the number-one qualifying position in his Hold Fast E46, but was one of just 11 drivers to make the cut for Top 16. As MotoIQ's Mike Kojima (the event organizers) lamented to us later in the night, the rain really had an adverse effect on qualifying, contributing to wrecks and mechanical failures, and mucking up otherwise perfectly good laps. Because of the low count, top qualifiers Diaz, Charpentier, Josh Mason in his GM LS-powered Ford Mustang, Jon Shaffer in his slightly cooked S14 (from a small brake fluid fire after a line broke in practice), and Daryl Priyono in his E36 all received byes into the Great 8. That meant only three battles for Top 16, with Carlos Cano-Estrella in his UZ V-8 Toyota AE86 Corolla, Amir Falahi in his E30, and Tony Cisneros in his S14 all beating their respective opponents to advance. 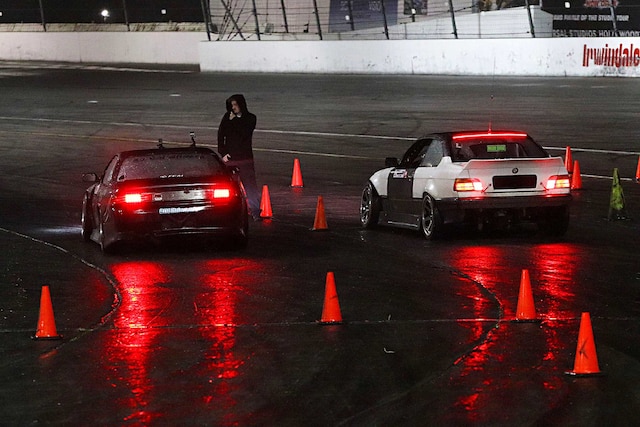 Diaz gave everyone the burny they were waiting for (or a peg-leg version of it) when he broke an axle against Cisneros to start Great 8, handing over the win, while Shaffer dispatched Priyono from competition. On the other side of the bracket, Mason bettered Falahi and Charpentier won against Cano-Estrella. As they did a couple times last season, Charpentier and Mason battled, this time in the semifinal, with the BMW driver emerging victorious against the Mustang. Cisneros and Shaffer then pulled up to the start line, with Shaffer doing all he could to mount a decent chase but to no avail—judges gave Cisneros the nod to move on.

This set up a third-place battle between Mason and Shaffer, and a finale between two drivers who are no strangers to one another, Cisneros and Charpentier. By this point we had enjoyed a few hours of dry, and the track was finally starting to come back—but then Mother Nature decided to bring back the rain. Mason and Shaffer went out for their first pair, which decided nothing, so judges asked for another, but by this time the diff in Shaffer's 240SX had given up; Mason collected the win and third-place hardware. As for the last battle, that happened in dumping rain, and while it was an uneven match—as many had been throughout the day, due again to the slick conditions—ultimately it was Charpentier's lack of chase that put Cisneros over the top.

And that's how it ended, Cisneros, Charpentier, and Mason on the podium, in that order. Somewhat comically, event organizers tried to hold the podium ceremony amid a straight downpour, which lasted for all of 1 second, at which point the affair was moved under the relative protection of the main grandstand. Kudos to the winners! Round 2 of 4 of the 2019 The Drift League pro-am championship is set for June 1st at Irwindale Speedway.