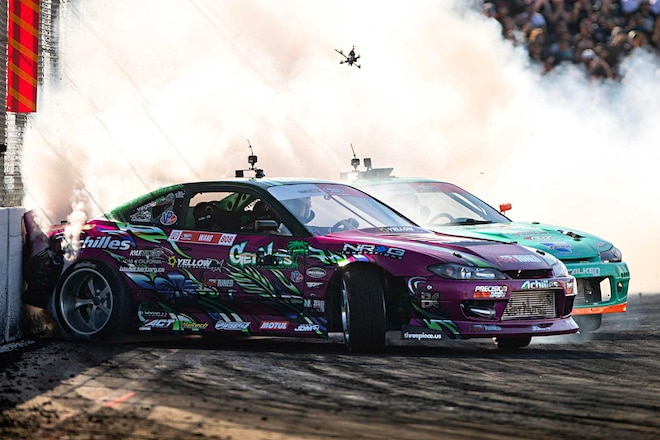 Not to get all sappy and sentimental, but we love Formula DRIFT Long Beach. It's one of two rounds Southern California gets (yep, totally spoiled) each year from the pro drifting series, and a really cool confluence of the extended tuner industry family, no joke—like, SEMA Show levels of running into industry friends. It heightens the atmosphere for a lot of us old timers making the rounds at the season opener, and turns what is to a lot of people an average FD round (if there is such a thing) into an annual (warm fuzzy) reunion. 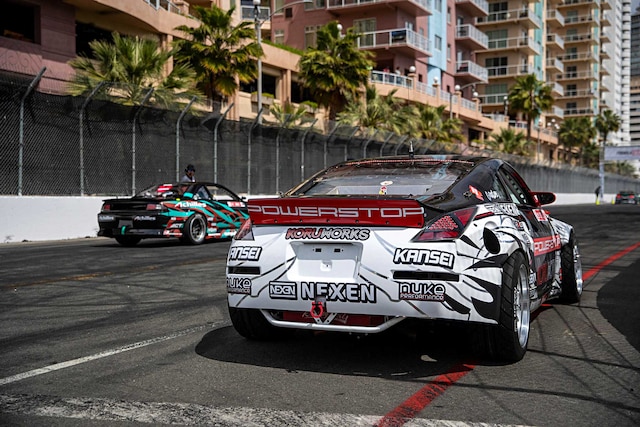 The 2019 Long Beach grid featured cars old and new to the championship, but probably even more importantly, enough entries and then some to fill up a Top 32 tandem eliminations bracket, which the series has struggled with in recent years. Competitor count was 36 heading into qualifying, a field that included international newcomers Joao Barion from Brazil in the first C7 in FD, the Nando SA/Barbarius Chevy Corvette; Manuel Vacca from Italy in the HP Garage BMW E46; and Mitch Larner from Australia, who rented Forrest Wang's 2JZ-powered Nissan S14 for the event. Pro 2 2018 graduates Travis Reeder in his S13 (because the Long Beach Fire Department wouldn't allow Reeder's team, Napoleon Motorsports, to run their EV Camaro), Dylan Hughes in the Black Magic E46, and Sebastien Gauthier in the BC Racing S14 all turned up for Round 1, while Pat Goodin made his triumphant return after missing 2018, now behind the wheel of Matt Field's Drift Cave S14. Livery refreshes were as far as the eye could see, and now there's a second Cadillac ATS-V in the series, Austin Meek's Verocious Motorsports-sponsored sedan (Taylor Hull debuted his Comp Cams Caddie a year earlier and was also ready for action in Long Beach).

The drifting gods giveth and they taketh away, and there were a couple of gnarly wrecks throughout the weekend, starting with Kevin Lawrence's bell-ringer almost from the word "go"; it was probably the second or third lap of the weekend's very first practice session on Friday when his Enjuku Racing S14.3 swung out wide into the Turn 1 90-degree righty, getting into the tire barrier and concrete wall and pretty much ending his weekend early. Ryan Tuerck totaled the Gumout Toyota 86 just ahead of qualifying, going into the tires on the outside of Turn 2 left-hand sweeper entry, and Dirk Stratton also gave that Outside Zone 2 some love, for the moment disabling his "Driftvette" (his Stratton Racing team hunkered down and got the C6 Vette ready to qualify). 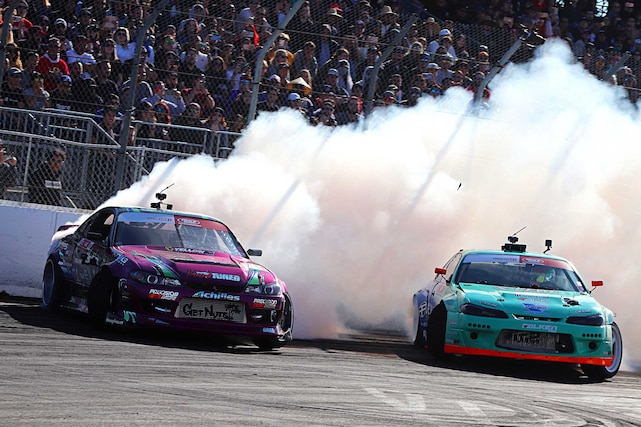 And speaking of qualifying—Formula D back-to-back reigning drivers champion James Deane from Ireland in the Worthouse Drift Team Silvia seemed to continue his dominant ways in SoCal (why wouldn't he?), at least at the start of the weekend; in a "new" (refreshed?) 2JZ S15, but with last year's livery, the young gun picked right up where he left off, laying down a pass of 98 out of 100 points on his first of two qualifying laps to secure the top spot—at least for a moment. His teammate, Piotr Wiecek in the second Worthouse Nissan, was also within the same sphere, qualifying right behind Deane, but Northern California's own Matt Field decided he wanted the number one designation and took it with a 99-point lap, which not only looked good in person, but also got spread around online like wildfire thanks to drone footy of the run produced by FD.

Saturday's battles were another example of how far the sport has come in the hands of FD; with few exceptions, nearly every tandem we watched was competitive. In Top 32, there may have been a bit of overzealousness between Justin Pawlak in the Falken Tire Roush Performance Ford Mustang and Alec Hohnadell in the ISR Performance S14, as their laps together were contact filled, at one point in his chase lap JTP almost driving up the side of Hohnadell's 240. Also in 32, Forrest Wang in the Get Nuts Laboratory 2JZ S15 had a major right rear de-bead chasing Taylor Hull's ATS-V, but that's when we learned if you are in the chase position the so-called tire "de-bead rule" does not apply.

While everyone seemed to charge pretty hard at Round 1, only a couple of matches from Top 16 on necessitated One More Time tiebreakers, one of those being Deane's battle against his countryman and bruh, Dean Kearney in the Oracle Lighting Dodge Viper (dubbed the "Battle of the Dean/es"); the champ ultimately won that pairing when Kearney looped his car in the chase position. In Great 8, fireworks came from the tandem of Falken drivers Odi Bakchis in his LS V-8 S14 and Justin Pawlak in his Roush Mustang; it was a back and forth of one-upmanship until JTP backed his pony car in just a little too deep into the first Touch & Go and for the briefest moment straightened, giving the win to Odi. 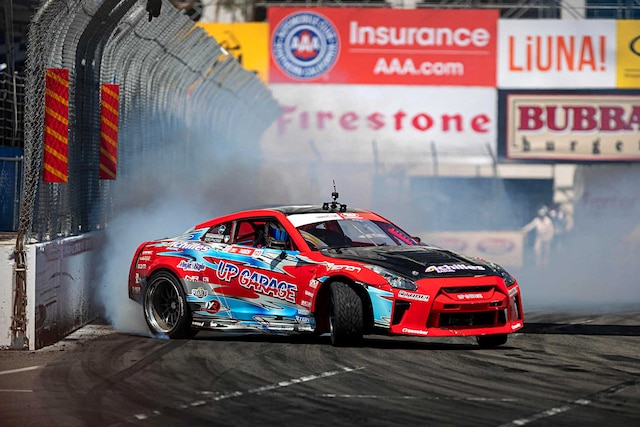 By the time the Final 4 rolled around, the only four left were Bakchis, the series only three-time champ, Chris Forsberg, in his NOS Energy Drink 370Z, 2015 champion Fredric Aasbo in his Rockstar Energy Drink Toyota Corolla, and Forrest Wang in the Get Nuts Lab S15. Wang has gone on record to say the three-turn street circuit-based course used for FD Long Beach is among his favorites, and it's really beginning to show. Last year, the driver from Las Vegas completed a rare Long Beach podium hattrick, finishing in second place for Round 1 of the 2018 championship, then a week later for the two nights of the Motegi Racing Super Drift Challenge demo during the Grand Prix of Long Beach, he picked up another runner-up trophy as well as one for third place on the second night.

He faced Aasbo, who has been on the Long Beach podium three times since 2010, all of those top-3 finishes in the last five years. He missed the podium in 2017 but won last year, came in second place in 2016, and won in 2015, the year he claimed his series driver's title. Like last year, Fredric looked solid but Forrest was feelin' the flow, filling zones and nailing clips in the lead. Unfortunately they wouldn't get a lap with Aasbo in the lead, as his 2AR turbo-4 gave up after the first lap, allowing Wang to advance and avenge his loss from last year. 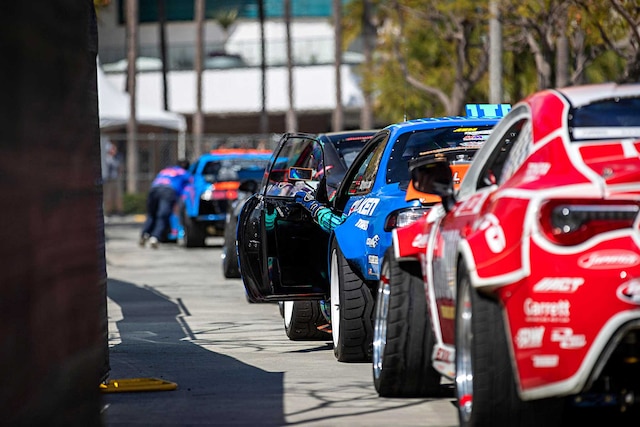 On the other side of the bracket, Odi paired with Chris, who himself has a trio of Long Beach podiums over his 16 years with FD, and the two have faced each other numerous times. The difference came down to Bakchis's slightly better run in the chase spot. Because he out-qualified Aasbo, Forsberg received third-place honors.

This left just Odi and Forrest to decide an event winner. For those who are familiar with the area's robust grassroots and pro-am drifting, the fact that the two finalists were products of those communities added another dimension of importance to the finale; additionally, neither program is all that well resourced, so to have a pair of "little teams" in the finale already felt like a vindication. The two held no punches, and put on an awesome set of laps, but proximity was not great with Odi in the lead, and when they switched Forrest's lead was not as smooth as his opponent's. This one seemed easy for the judges, who put Bakchis on the top step of the podium

It was a fittingly electric start to the year, and now the competitors are out of the gate, with Odi out to a quick lead in the points at 104 markers, followed by Forrest at 83 and Chris at 67. Next up is the Super Drift Challenge—again in Long Beach, during the GP weekend—followed by Round 2 of the 2019 championship, at Orlando Speedworld in Florida April 26th and 27th. For more from Formula DRIFT Long Beach, be sure to check out our Media Day, Qualifying and car show galleries.