Any other year, the Jimmy Up Matsuri—held again at Willow Springs International Raceway on its 11-turn, winding, hillside Horse Thief Mile—might not be such a huge annual milestone in a local calendar of SoCal drift events that's usually pretty packed. But with California only just beginning to ever so slowly come out of lockdown due to the COVID-19 pandemic, and the postponement or outright cancellation of so many events in the last three months, seeing the track day actually go off without a hitch must have been a huge sigh of relief for everyone involved. It was an outpouring of positive enthusiast energy that we've missed, and while in the grand scheme of things the drift matsuri might represent just a small step, it's still a step in the right direction in a year where everything seems to be going the wrong way.

With that said, this wasn't you're usual Jimmy Up Matsuri. While the event was capped at 60 drivers, no spectators were allowed, and there were strict limits on the numbers of media and guests/team members allowed in. Furthermore, the track asked event organizers to make sure pit areas were a minimum distance apart. Any violation and Willow threatened to pull the plug, which thankfully never happened. 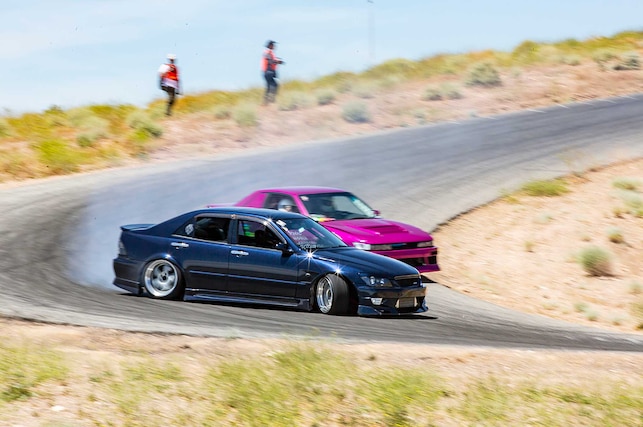 For many, the drift matsuri was their first event of the year, and we saw a lot of familiar faces and more than a few familiar machines. Pros like our favorite mullet Rad Dan Burkett in his backup "Baby Blue" A80 Supra, Jeff Jones in his V-8 370Z, and Trent Beechum in his beater camo S14 were getting in seat time ahead of a 2020 Formula DRIFT season that's looks to get underway in July at Road Atlanta in Georgia. All five Team Hammertime cars were on hand—those would be Daniel Giraldo's AE86, Jairo Jaramillo's and Nieko's S13, Daniel Nguyen's Cressida, and David Lim's Altezza—in their trademark matchy-matchy white on highlighter-yellow wheels, and we were also groovin' on John Ruiz's be-flamed IS and the Rival Autoworks S13. The weather was perfect in Rosamond, and from everyone we talked to it seemed like the staff of the third annual Jimmy Up Matsuri kept things moving along smoothly—in short, it was a damn near perfect drift event. Amid strange times and against unusual setbacks, no one expected a rager, but that's exactly what they got.